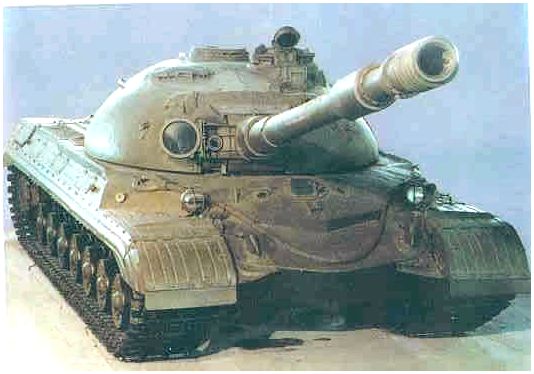 Ace heavy tank «Object 277» was designed in Leningrad, in the CB under the ZY Kotin v1957 year. Its design used some technical solutions implemented in the tanks IS-7 and T-10.

55-ton tank had a conventional circuit assembly. The case had cast a frontal portion and a curved side plates. In the extended front of the cast of the tower was installed optical rangefinder sight, and in an elongated aft — mechanized stacking shots for the gun. The crew consisted of 4 people.

Engineering design of the 130-mm gun M-65 was performed Bureau of Plant number 172 under the control of M. Tsirul’nikova spring of 1956, and in June 1956 began tests of prototypes guns.

Gun barrel M-65 consisted of a tube monoblock casing breech, ejector and motivated muzzle brake. Loading the gun separate-case, charge weight 12.2 kg, supply mechanical, electromechanical rammer. As gun has not been put into service, it is not the official rate, but was worked option permissible flow rate of 10-15 rds. / min. The gun was equipped plane stabilizer «Thunderstorm», sight-rangefinder TDPS and night sight TPN-1. 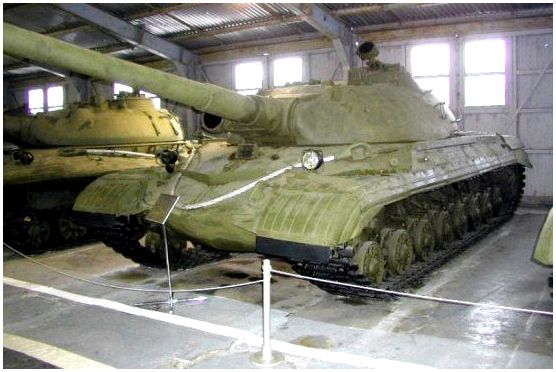 It must be emphasized that the new design is almost languid tanks began in January 1955, even before the 1498 Decree number 837. Tank developed a 2-ways: ob.277 and ob.278 with gas turbine (GT). Both versions differ only in the engine compartment. In ob.277 as the engine was supposed to use a modernized version of the V-2 diesel engine of 1000 hp or marine diesel M-850, serially produced Leningrad plant them. Voroshilov. Kotin prefer a bird in the hand and no mistake — the upgraded standard motor V-2 design IJ Trashutina was only released in 1958 and then in experimental models. A ob.277 got a good twelve- diesel, developing 1,090 hp power at 1850 rev / min.

Diesel M-850 was placed on the axis of the tank, and the edges were located ejector cooling system, under them — oil and fuel tanks. At the front of the engine compartment air cleaner installed. In the stern, between the final drives were located eight-planetary gear mechanism with rotating type HCC and hydraulic control system.

Small diameter road wheels with internal shock absorbers were structurally similar to the first samples of rollers KB tanks and allowed savings in weight machines. This will increase the length of the torsion bar by the removal of heads inside the beams to support the outer edge of the rollers. In the last pillars provided telescopic hydraulic suspension. Longish torsion bars in totality with hydraulic shock absorbers provide sufficient languid tank ride and have allowed to rely on the highest speed when driving on rough terrain and uneven ground. 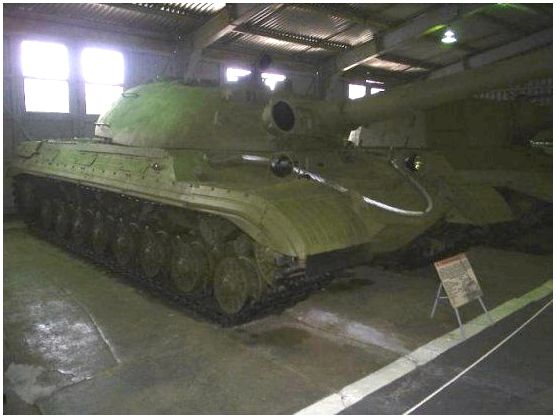 On ob.277 were first established anti-nuclear defense elements. For the first time in Russian practice was adopted rangefinder sight TPD-2C, in which mixed stabilized in the 2-planes sight an optical rangefinder with a base tube disposed transversely outside of the tower. TPD creation was preceded by long-2C tests conducted in conjunction with the Kirov factory Krasnogorsk mechanical plant for experimental tank ob.269 in 1953-1954.

In 277 was set to automatic cassette loading mechanism. The shells arranged vertically in a closed chain conveyor, located at the rear of the crew compartment on the rotating floor overseas rollback gun, and the sleeve fit horizontally on a special conveyor belt installed in the recess of the turret. The shell automatically rotated to a horizontal position and fed the line chambering. Further shell the tray was connected to the sleeve, then shot entirely in a single turn dosylatelya served in the bolt guns.

0
Like this post? Please share to your friends:
Related articles
Interesting 0
Society Former candidate for participation in the presidential election Sergey Ryzhov said that he
Interesting 0
Everything you need to know to start cranking out cash with your PC BY
Interesting 0
«… Air Force Commander Alexander Novikov reported that the two are ready to
Interesting 0
Above the summit crater of the volcano in Alaska Cleveland workers, local observatory
Interesting 0
December 1. Annual capacity is about 180,000 cubic meters of finished products used, including
Interesting 0
Disclose Truth TV introduced a new TV show with the participation of experts: Tarpeya
Categories
SQL - 47 | 0,207 сек. | 10.87 МБ