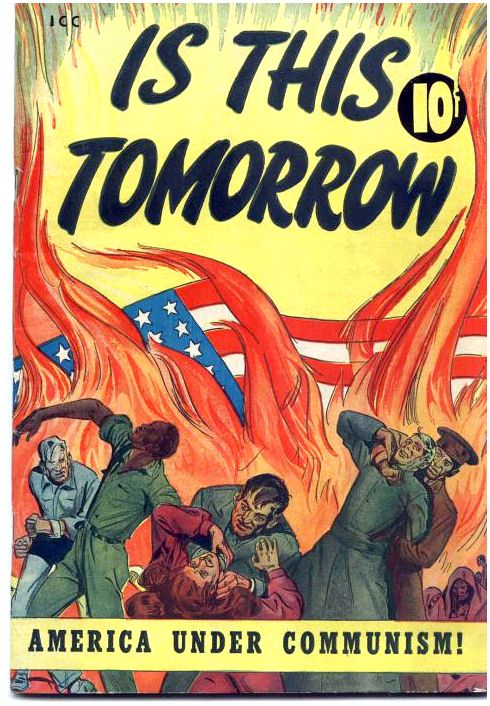 Members of the American Public Public Catechetical Guild Educational Society (roughly translated as catechetical Enlightenment Union) conspiracy theory was simple and slim — to rule the world seek treacherous Communists. They have ruled part of the globe, in line with everything else. And America as well.

This organization from the forties by the sixties published the cartoons, which were distributed in Catholic Sunday schools across America. I offer you the most striking example of a «conspiracy» of comics from this organization — Is This Tomorrow: America Under Communism, published in 1947, at the beginning of the Cold War. Under the cut — a summary (with pictures, of course).

Cover of comic book in the expanded needs no comment. A pathetic introductory text states that in America now (1947) only 85 thousand legal members of the Communist Party. But each of them has ten hidden Communists. This — the fifth column of the Kremlin. Hidden Communists tend to occupy high positions, they penetrate into the media. They are night and day preparing to overthrow your government! They are everywhere!

Ordinary Americans are thinking — we can not be so. But millions of naive people in other countries thought as well. And where now these countries and these people? That’s right — in the communist slavery. Let’s make it so that we did not.

What can I say? Pathetic and quite typical of the conspiracy. 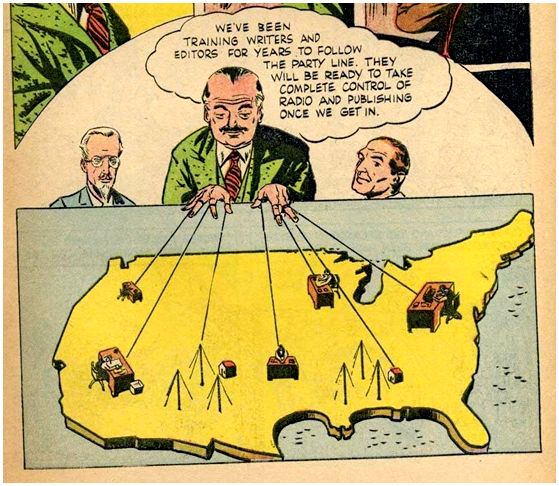 We get to know the main communist conspirator — some fellow Jones and his fellow councilor to promote Brown. «We have to prepare writers, journalists and editors to ensure that they are conducted our party line» — says Brown. On another picture, Brown claims that Hollywood has promoted class struggle and denounce the bourgeois morality.

Jones and his minions successfully foment class struggle and interracial conflicts. But the Catholics in their propaganda gets more than others. «I heard that Catholics hold weapons. They hide him in the basement of the church «- whispers in the ear of his girlfriend lady after watching the movie» Russia Today «. Terrible people — these Catholics. All the polls with korotkostvolom. 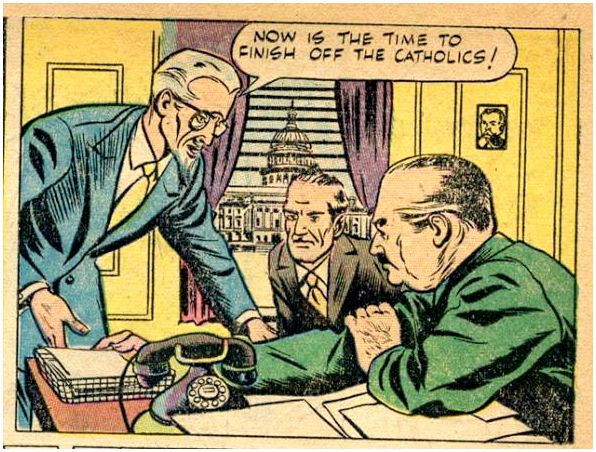 «Now it’s time to do away with the Catholics.» The Communists at that time in full control of the Speaker of the House of Representatives. This happened after a killer (in appearance clear Catholic) one throw grenades at once and nailed the president and vice president. In the country — a state of emergency, canceling almost all of the great articles of the Constitution, the new head of the state is endowed with unlimited powers. «The Puppeteer» Jones is, of course, the chief adviser of the new dictator. Scary as much horror. 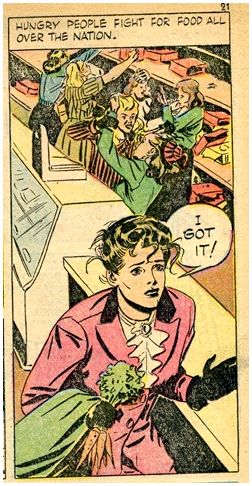 Among the come horrors of communism, as described in the comics, the strongest impression on the readers had to produce state control over food supplies. There was state control — food disappeared. The lady in this picture happy — she managed to get a bit of carrot (and it is a rare delicacy in the Communist America). 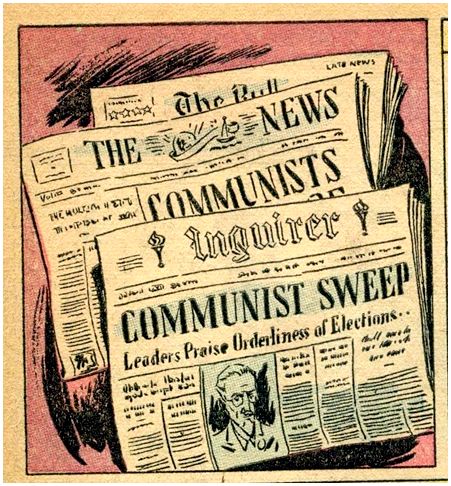 Press Now, of course, under the full control of the Communists.

All telephone companies are nationalized. 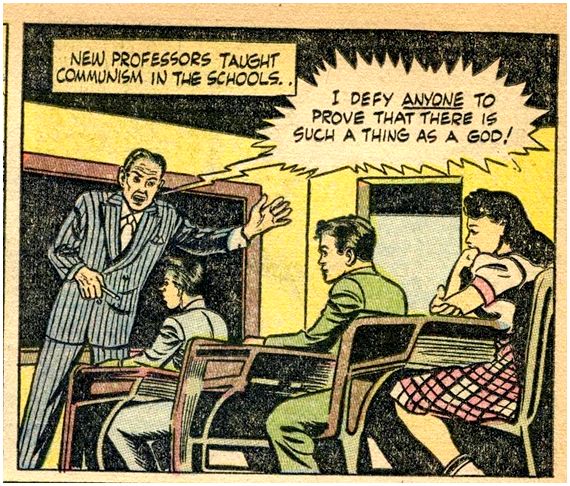 «I would challenge anyone who undertakes to prove that God exists.» The reform of school education in action. 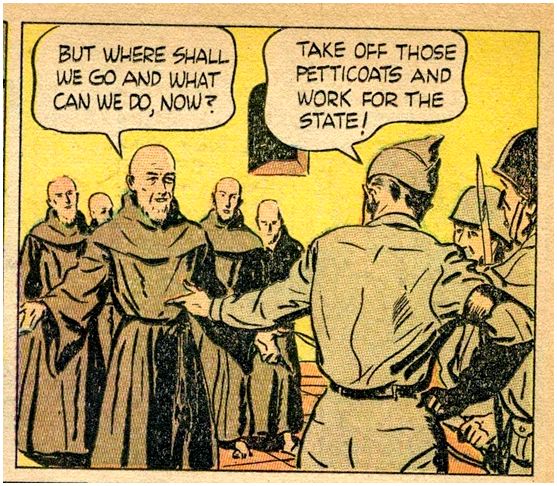 Horror goes on increasing. Monks are interested in «Where are we going and what do we do?» «Take your skirt and go to work for the state.» 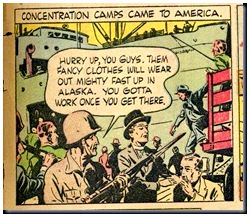 Here in America, there were concentration camps. They have appeared in Alaska, where take away all the «dissidents». And where they have to take away? Not in Florida though. 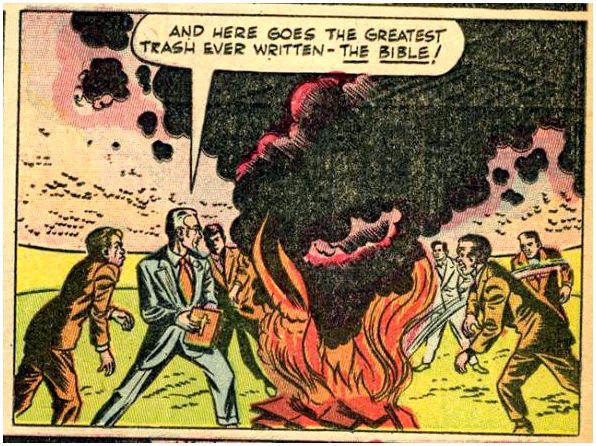 Of course, the Communists can not organize bonfires are burnt on the Bible. 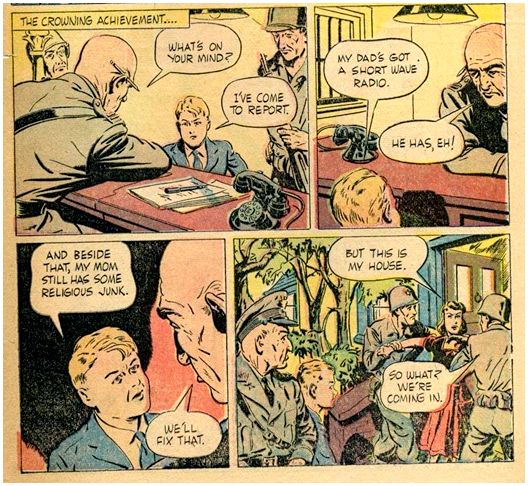 Strongly implanted snitching. «My dad has a shortwave radio.» A terrible crime.

Such is the dystopia of American Catholics forties. I am an Orthodox, and nothing against the other Christian denominations do not have — there among friends and Protestants, Catholics, and atheists lack. But in the name of the organization, has issued this comic has the word «catechetical». What is a catechism? Look in the nearest dictionary and see that it is an «official document of any religious denomination.» Look in the «Catechism of the Catholic Church.» And look there, something about some purely secular «ism.» And do not find anything.

0
Like this post? Please share to your friends:
Related articles
Interesting 0
Society Former candidate for participation in the presidential election Sergey Ryzhov said that he
Interesting 0
Everything you need to know to start cranking out cash with your PC BY
Interesting 0
«… Air Force Commander Alexander Novikov reported that the two are ready to
Interesting 0
Above the summit crater of the volcano in Alaska Cleveland workers, local observatory
Interesting 0
December 1. Annual capacity is about 180,000 cubic meters of finished products used, including
Interesting 0
Disclose Truth TV introduced a new TV show with the participation of experts: Tarpeya
Categories
SQL - 47 | 0,364 сек. | 10.88 МБ