In 1943, in Brazil after an attempted robbery of a local museum were detained by German company «Ahnenerbe.» During interrogations, they showed that were brought to South America’s secret ship Abwehr — yacht «pass» — with a special mission to find and «call» Crystal Skull «Goddess of Death.» With the same purpose had been abandoned a few groups. And although many also arrested, it is possible that some success was achieved. According to ancient legends were thirteen crystal skulls «Goddess of Death» and store them separately from each other under the watchful eye of the priests and special warriors.

These traditions have long passed from mouth to mouth in Central America. According to the beliefs of the Mayas and Aztecs, the world was destroyed four times, and we live under the fifth sun. Under the first giants lived, they destroyed the water. Kite has destroyed the people who lived under the second sun. He turned people into monkeys, and only two survived — a man and a woman. The inhabitants of the third world eat some fruit. It destroyed the heavenly fire. Under the fourth sun people died of starvation. End of the fifth of the world will shake the earth and of the whole of life will cease.

Mayan calendar dates back to 13 August 3114 BC and ends December 21, 2012 It is associated with Venus. In the accompanying manuscript writings, called codes, contains numerous predictions. It also says that 13 crystal skulls exist from the days when there were 12 inhabited planets. Their inhabitants handed skull Atlanta. But Maya got them already from them. 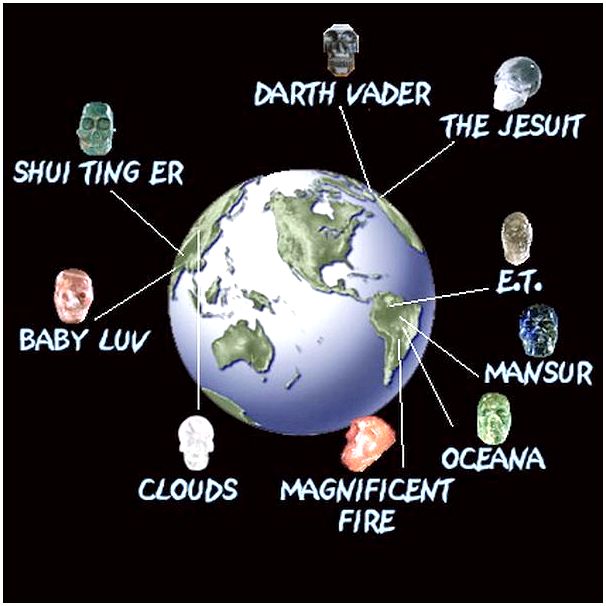 For a long time scientists did not attach significance to these words, until finding Mitchell-Hedges did not make them think. 13 skulls story began in 1927, when Mitchell undertook an expedition to Central America, hoping to find the remains of the lost civilization of Atlantis. And, without knowing it, they discovered the ruins of the «City of fallen stones», which once occupied the Maya.

On his seventeenth birthday, Anna, adopted daughter of Mitchell, found in the rubble of an ancient altar made of transparent quartz and polished human skull in full size. To those who are touched by this skull, horrible things start happening. For the first time this happened with the Anna. One night, she placed a surprising discovery near his bed. All night she dreamed strange dreams of Indian life a millennium ago.

At first, it is not associated with these dreams skull. But strange dreams continued to visit her whenever crystal skull was next to her headboard. These were all new details of the life of ancient Indians, including no known before. Something similar to what I saw in his dreams, Anna Mitchell-Hedges, experienced the researchers and other so-called «British Crystal Skull.»Psychics and highly sensitive people as one say that the skull evoke them special, almost hypnotic state, accompanied by unusual smells, sounds and vivid visual hallucinations. Sometimes they attend the «strange visions from the past, and perhaps of the future.»

Crystal skulls attributed mystical powers. If you long to look into the eye socket, they can see the «other skull, bony fingers, rocks, distorted faces and mountains.» Moreover, the researcher Dordland admitted that while working with the skull he often heard the mysterious sounds, «the sound of silver bells, quiet but clear … voices in unison singing strange songs in a strange language … whispering and tapping different.»

Crystal skulls really affect those close to him. Some people feel uncomfortable and weird fears. Some even fainted and briefly lose their memory. Others, on the contrary, a strange calm and even experiencing bliss. There are people who, after «communication» with the skull, «Mitchell-Hedges» cured of serious illnesses.

And it is quite the mystical properties of the Crystal Skull Jose Indikez told someone in an interview with the famous researcher Joshua Shapiro. In 1990, in Las Vegas, this respectable and very wealthy gentleman said that in his youth in the ruins of the ancient Mayan city found a crystal skull carved with strange symbols on it.

Nakhodka he kept all his life, like a magic talisman. The fact that Indikez accidentally discovered amazing property skull: if his clenched in his hand and at the same time to articulate their desire — it is necessarily true. Exactly Indikez achieved in life everything you wish for. Three years after this conversation Indikez died and miraculous skull mysteriously disappeared.

In the early 60’s studying the skull, «Mitchell-Hedges» Frank Dordland engaged art. He found in it a system of lenses, prisms, and channels, creating unusual optical effects. What is striking is that even perfectly polished crystal under a microscope to be seen the next. He decided to seek advice from the famous company «Hewlett-Packard», is considered the most authoritative on the examination of the quartz.

The examination results shocked everyone. A study conducted in 1964 in a special laboratory of the company «Hewlett-Packard», showed that the skull had been made long before the first civilizations in this part of America.

In addition, rock crystal of such high quality in these areas does not occur. «Antediluvian» skull was made from a single crystal, contrary to all known laws of physics.

But this mysterious stories associated with skulls, are just beginning. In winter 1994 the mistress ranch near Creston (Colorado, USA), circling the horse his possessions, found a human skull made of transparent glass or crystal. But he was crushed and twisted, as if before a cure was very malleable. Where it came from and why it is mutilated, remains a mystery to this day. Interestingly, it was in the area most frequently observed UFOs mutilate cows.

Intrigued by the findings of historians and anthropologists have found the ancient Indian legend of the thirteen crystal skulls «Goddess of Death.» They are kept separate from each other under the watchful eye of the priests and special warriors. Thirteen priests in different places at the same time had to look into «his» skull and were thus able to communicate and get information about everything — past, present and future, that is, it was a kind of computers connected to the entire universe.

And legend has it that the dedicated could see the turtles day return of the gods, including most of Kukulkan — bearded Caucasians «god of the planet Venus,» which used to be, «in the time full of darkness», descended from heaven, and gave the Indians knowledge : writing, mathematics, astronomy, learning how to build a city, use the calendar, to grow rich crops.

Similar skulls were found not only in America (Mexico, Brazil, United States), but also in Europe (in France) and Asia (Mongolia, Tibet). They proved to be much more than thirteen. But not everyone was as perfect as the «Mitchell-Hedges.» It seems that it was the later and not very skillful attempt to create something like a perfect skull, which was thought the Indians who once gave people the gods.

It turned out that the ancient crystal skulls interest not only historians, but also some secret society. So, literally under the nose of archaeologists in Honduras disappeared so-called «Rose Quartz». The investigation revealed that prior to the disappearance of his several attempts to steal the secret cult priests.

Crystal skulls interested and serious state structures. In 1943, in Brazil after an attempted robbery of a local museum were detained by German company «Ahnenerbe.» During interrogations, they showed that were brought to South America on a special mission to find and remove the Crystal Skull «Goddess of Death.» But why most secret agencies of Nazi Germany needed crystal skull?

Secret to the Third Reich was not only conquer the land, but also to seize power in the unseen world. This was done by the chief scientific research institute of the Order of the SS «Ahnenerbe» («Ancestral Heritage»). «Secrets of the cardinal» of this mystical order was a descendant of an ancient magical race, the media «knowledge devil» Gruppenfuhrer SS Carl Maria Villigute. It was on his initiative emissaries «Ahnenerbe» and scoured the world in search of magic props.

They were especially interested in the methods of the priests of Atlantis. The Nazis hoped that this knowledge «progenitor of the Aryan race» will allow them not only to create a superman, but with the help of magic to subdue the rest, subhuman.

Today, some researchers suggest that the crystal skulls found were born in Atlantis, and only narrowly survived the disaster. One of the most respected scholars of crystal skulls Frank Joseph became interested in: who could belong to the skull, «Mitchell-Hedges»? On this task were two independent groups: the New York Police lab and psychics. And they both said that the crystal skull of a young girl, whose portraits have been very similar.

However, not all the skulls are human. There are those (such as «Skull Maya» and «Alien Skull»), which have the features of animals and aliens. Maybe they belonged to other sentient beings, once visited Earth? Taken together, they could tell us about our past and help to avoid disaster. There is still time to 2012, and perhaps crystal skulls left to us as a gift to the more advanced civilizations, will be told how to do it.

Mystery of the Crystal Skull

0
Like this post? Please share to your friends:
Related articles
Interesting 0
Society Former candidate for participation in the presidential election Sergey Ryzhov said that he
Interesting 0
Everything you need to know to start cranking out cash with your PC BY
Interesting 0
«… Air Force Commander Alexander Novikov reported that the two are ready to
Interesting 0
Above the summit crater of the volcano in Alaska Cleveland workers, local observatory
Interesting 0
December 1. Annual capacity is about 180,000 cubic meters of finished products used, including
Interesting 0
Disclose Truth TV introduced a new TV show with the participation of experts: Tarpeya
Categories
SQL - 57 | 0,205 сек. | 11.34 МБ