Although elektroavtomobili were one of the earliest inventions, the fashion for them has passed quickly. Development of electricity as an energy source for mankind took place with great contradictions.

Thomas A. Edison was the first to start selling electric system (ie generators) have some commercial value. His research and talent izoretatelsky possible to develop a system of direct current. These systems are equipped with the court, municipalities began to cover the street. At the time, Edison was the only source of electricity!

While the commercialization of electricity gaining momentum Edison hired a man hath brought the world an unprecedented scientific talent and to develop entirely new approaches to energy. The man was a foreigner Nikola Tesla. His development outshone even the Edison! While Edison was a great experimenter, Tesla was a great theoretician. Edison constant experiments it somewhat annoying.

Tesla preferred to mathematically calculate the possibility of a process than immediately grab a soldering iron and constantly eksperimentorovat. So, one day, after a heated discussion, he left the Edison Laboratory in West Orange, New Jersey.

Working alone Tesla thought and created the first current generator explanatory variables. He, and he alone, is responsible for all the benefits that we enjoy today because of AC power. 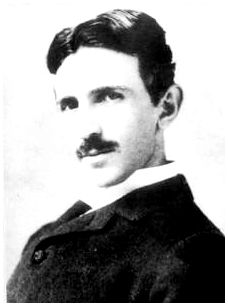 Angry Edison in the early 1900s, Tesla sold his new patents George Vestingousu for 15 million dollars. Tesla became fully independent then continued to study in his laboratory on 5th Avenue in New York.

George Vestingous began selling the new system generators creating competition Edison. Vestingous won, thanks to the obvious advantage of new generators in comparison with less efficient genratorami Edison. Today AC — only source of electricity consumption and the world, please remember, Nikola Tesla — the man who made it available to people.

Now, regarding the early development of electric vehicles. Electric car has a number of advantages that are noisy, moody, smoky vehicles with internal combustion engines can not offer.

First of all — the absolute silence that accompanies the vases while riding in an electric car. There is even a hint of noise. Just turn the key and press the pedal — as the vehicle starts to move immediately. No chatter in the beginning, no shifting, no fuel pumps and problems with them, no oil levels, etc. Simply turn the switch and go!

The second — the feeling of power and submission engine. If you want to increase the speed — just press on the pedal, and no jerk in the process. Release the pedal and the vehicle immediately slows down. You always have full control over management. Not difficult to understand why these vehicles were so popular at the turn of the centuries, and almost to 1912.

The big disadvantage of these cars was their range and need to be recharged every night. All of these electric vehicles used a series of batteries and DC motors. Batteries require recharging every night and the range of motion was limited to about 100 miles it. This is not a serious limitation in the beginning of this century. Doctors began to leave on a call on electric cars because they are no longer needed horses just plugging the car into an electric socket on the night! No relocation interfere receive net profit.

Many of the big department stores in metropolitan areas have started to use electric vehicles for the delivery of goods. They were quiet and do not emit any pollutants. Electric service was minimal. Urban life has promised a great future of electric vehicles. Note, however, all electric work with DC.

Two things happened that put an end to popular electric car. Each subconsciously craved speed that gripped all avtoentuziatov that era. Each manufacturer tries to show how far his car could go and what is the highest speed.

Colonel Vanderbilt built the first solid racing circular race track in Long Island has become the embodiment of passion «beautiful life.» Newspapers constantly printed summary of new records in speed. And, of course, car manufacturers have been quick to hand to take advantage of their advertising effect of these new peaks of speed. All this created image of electric vehicles as a means of transport for the old lady or gentleman retired.

Please note that none of the manufacturers of electric cars have never used a DC generator. This would feed a small charge the battery while driving, and thus increase the range of its run. This was seen as some kind of perpetual motion, and of course it was considered absolutely impossible! Actually, DC generators could work successfully and to help the survival of electric vehicles.

As mentioned earlier, electrical AC G. Vestingousa, sold spread throughout the country. Earlier DC systems were removed and ignored. (As a curious note: United Company Edison in New York City is still using one of DC generators Edison established on the 14th power, and it still works!) Approximately at the specified time, another giant corporation was formed and entered into production AC equipment — GE. This put an end to the absolute power systems Edison as commercial means of production and distribution.

Electric cars were not designed to be placed on them polyphase motors (AC), since they used a battery as a power source, their disappearance was a foregone conclusion. No battery can produce alternating current. Could certainly use a converter to convert to AC, but the size of the equipment at that time was too large to place it on the cars.

So Oklo 1915, electric car gone forever. True, United Parcel Service is still using more electric trucks in New York today, but most of their vehicles using gasoline or diesel fuel. Today elektromobli dead — they are seen as the dinosaurs of the past.

But, let us stop for a moment to rassmotert advantages of using electricity as a means of transportation vehicles. Their service is absolutely minimal. Oil is almost required for the engine. There is no oil to be replaced, no radiator to clean and fill, no gears to become dirty, no fuel pump, no water pump, no problems with korbyuratorom, no crank mechanism to rot or replace and no pollutants emitted into the atmosphere. Is this not the answer that all seem to be looking for!

Therefore, these two problems facing us, the low speed with a little distance movement and constant change of the AC today can be solved. With today’s technology it does not seem insurmountable. In fact, this problem has already been solved in the past. The distant past. And not very distant. Stop! Think about what was said a few moments before continuing!

Earlier in this article, I mentioned the man, Nikola Tesla, and said that he was the greatest genius who ever lived. The U.S. Patent Office has 1,200 patents registered in the name of Nikola Tesla, and it is estimated that he could patent a further 1,000 or thereabouts from memory!

But back to our electric vehicles — in 1931, with funding from Pierce-Arrow and George Westinghouse. In 1931, Pierce-Arrow was selected to be tested in the factory grounds in Buffalo, NY The standard internal combustion engine was removed and 80 hp 1800 rev / min motor was mounted on the clutch to transmission. AC motor had a length of 100 cm and 75 cm in diameter. The energy that powers it, was «in the air» and no more supplies.

At the appointed time, Nikola Tesla arrived from New York City and inspected the car Pierce-Arrow. He then went to a local radio store and bought 12 vacuum tubes, wires and various resistors. The box had dimensions of 60 cm long, 30 cm wide and 15 cm By reinforcing the box from behind the driver’s seat, he attached the wires to the brushless air cooling. Two rods with a diameter of 0.625 mm. and about 7.5 cm long, sticking out of the box.

Tesla took the driver’s seat, to connect these two pins and said, «Now we have the energy.» He pressed on the pedal and the car go! This vehicle is powered by a AC motor develops up to 150 km / h and has the characteristics of better than any car with an internal combustion engine at that time! One week was spent testing transportngo funds. Several newspapers in Buffalo reported this test. When asked, «where does the energy come from?» Tesla replied, «From the air around us all.» Sources say that Tesla was mad and somehow in league with sinister forces of the universe. Tesla is angry, he removed a mysterious box from the vehicle and returned to his laboratory in New York. His secret went with him!

Here I would like to note that the charges of magic constantly accompanied activities Tesla. His lectures in New York were very popular, and people came from far physics. And not just because Tesla had the ability to explain the physical laws of ordinary human language similarities, but rather because of the lectures he demonstrated experiments that even today could surprise to students of electronics, not something that ordinary people.

For example Tesla took out his portfolio small transformer operating at high voltage and high frequency alternating current at very low current. When he included around him began to squirm lightning, while he calmly caught with their hands, while the people with the first places in the hall hurriedly moved back. This focus is more fun than sawing man.

Also a good show was an experiment with bulbs. Tesla transformer and plug in your regular light bulb began to glow in his hands. It already is astounding. When he took out of his briefcase bulb devoid of spiral pitch, just an empty bottle, and it is all the same to shine — surprise listeners nebylo limit and otherwise as mass hypnosis or magic they could not explain it.

«Focus» with lights explained simply, if you know some laws. Tesla wrote, at a certain frequency vibrations conductive thin air as well or even better than copper wire. Of course, it would have been impossible if absent, a single wave medium («ether»). In the absence of air gets clean air conduit, whereas only prevents air as an insulator.

Nekotrye researchers are attracted to the explanation of Tesla’s electric magnetic field of the Earth, which Tesla could use his generator. It is possible that using a high-frequency high-voltage circuit AC Tesla tune it to resonate with the vibrations of the «pulse» of the Earth (about 7.5 Hz). Here, obviously, the oscillation frequency in his scheme had to be as vyskokim while remaining 7.5 times the Hertz (or rather — between 7.5 and 7.8 Hz).

0
Like this post? Please share to your friends:
Related articles
Interesting 0
Society Former candidate for participation in the presidential election Sergey Ryzhov said that he
Interesting 0
Everything you need to know to start cranking out cash with your PC BY
Interesting 0
«… Air Force Commander Alexander Novikov reported that the two are ready to
Interesting 0
Above the summit crater of the volcano in Alaska Cleveland workers, local observatory
Interesting 0
December 1. Annual capacity is about 180,000 cubic meters of finished products used, including
Interesting 0
Disclose Truth TV introduced a new TV show with the participation of experts: Tarpeya
Categories
SQL - 56 | 0,354 сек. | 11.51 МБ