Termination of the USSR work on the creation of almost all types of artillery weapons in the late ’50s led to the backwardness of the Russian artillery from the U.S. and other NATO countries in a number of areas, and the first in the area of self-propelled, languid and long-range weapons. History justified the Russian military strategists mistake: despite the successful development of the tactical and operational-tactical missiles, the role of long-range cannon artillery in local wars has not diminished, but increased. For example, in the late 50’s — early 60’s our advisors in China were in an awkward position. Kuomintang established battery of American long-range guns on the islands in the Taiwan Strait and opened fire on mainland China. Answer a Chinese was nothing. Most long-range 130-mm gun M-46 Russian production did not reach the Kuomintang batteries. Fortunately, one of our special found a clever way — to heat the charges and wait for a favorable wind. They waited, and got heated, to the majestic surprise the Yankees. A few belated response to the Soviet Union became the South American M107 152-mm self-propelled gun 2S5 «Hyacinth», the development of which began in SLE Perm Machine Building Plant (PMZ) in December 1968. 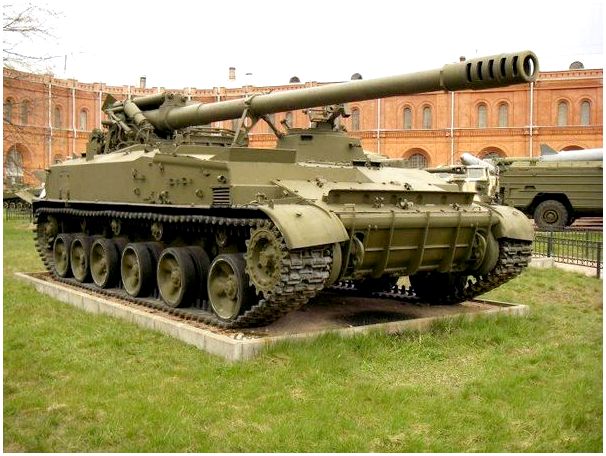 From the beginning, work was carried out in 2-ways: created and towed self-propelled Options gun — «Hyacinth-B» and «C-Hyacinthe.» These guns Grau (Main Missile and Artillery Directorate) has assigned codes 2A36 and 2A37, respectively. Both versions had similar ballistics and ammunition designed specifically for them. Interchangeable with «Hyacinth» shots of other 152-mm guns in the Russian Army was not.

SKB PMZ designed artillery unit, Sverdlovsk Plant of Transport Engineering (SZTM) — chassis, and the Research Institute of Machine Building (THEM) — ammo. In September 1969, for the consideration of projects Grau received CAU «Hyacinth» in the open (shearing) and tower versions, but it was the first. In June 1970, a decree № 427-151 authorized the full-scale work on the ACS «Hyacinth». In March and April 1971 were made by two experimental 152-mm gun «Hyacinth» (ballistic installed), but because of the lack of sleeves, not granted THEM, shooting had to run from September 1971 to March 1972. CAU initially planned to equip the 7.62-mm machine gun, but in August 1971 decided to take it off. But later, he appeared again. By April 1972 have been finalized and prepared at all projects, «Hyacinth» in a self-propelled and towed guns variants with separate-case loading. And the other option was developed ACS «Hyacinth-BC» with a gun 2A43 kartuznogo loader. Yet, most have adopted separate-case. In the batch creation of «Hyacinths» launched in 1976, and they immediately began to come into service artillery brigades and divisions. 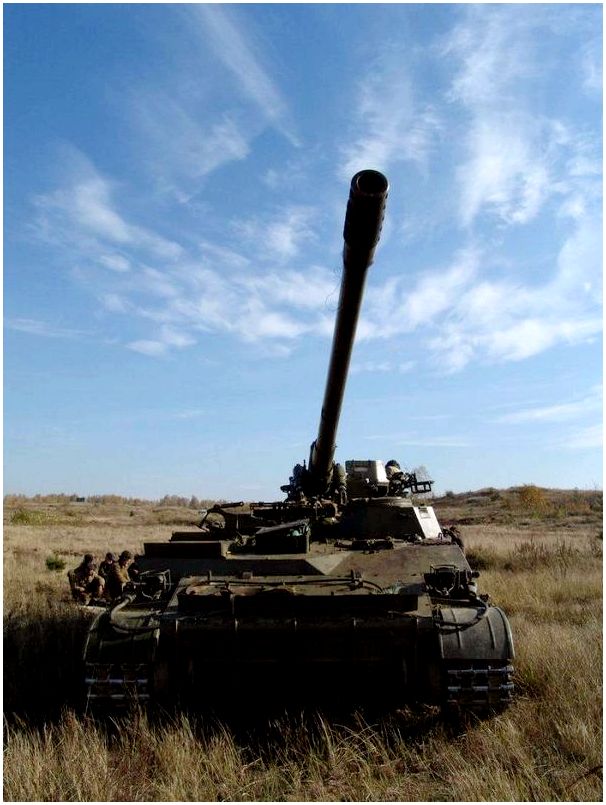 Gun barrel 2A37 consists of a tube-in-One, the breech and muzzle brakes. Large-slotted muzzle brake is screwed onto the pipe. Automatic gate — a horizontal wedge skalochnogo type. Hydraulic brake roll grooving type, friendly pneumatic recuperator, cylinders which are rolled back together with the barrel. Large recoil length is 950 mm and smaller — 730 mm. Rammer with electric chain produces ramming into two stages: first shell, and then — the sleeve. The gun has a pie lift and twist mechanism and a pneumatic pusher balancing mechanism.

The spinning part of the machine gun is mounted on the center pin chassis. Angle of gun laying in a horizontal plane is 30 °, the vertical plane — of -2,5 ° to 58 °. Gun armed with a light shield to protect the gunner and some devices from bullets, shrapnel and small acts of muzzle gas wave during shooting. It is stamped from sheet steel construction, mounted on the left cheek of the upper machine. The structure of the gun sighting systems include mechanical sight D726-45 gun panorama PG-1M and optical — OP4M-91A. Chassis «Hyacinth» were created on the same basis as the chassis SPG 2S3 «Acacia». Ammunition is also located inside the body, but the projectile and charge the machine is done manually. When firing ACS stabilized with hinged base plate-opener placed outside in the rear of the hull. For this reason, shooting the move fundamentally impossible. Time to transfer cars from traveling to combat less than 4 minutes.

Initially the regular ammunition was shot VOF39 80.8 kg in weight with high-explosive projectile RP-29 (46 kg), stuffed with 6.73 kg of the potent explosive A-IX-2 and having a head impact fuze B-429. Dependent on the purpose of firing could be carried out by one of 4 types of applied charges. Later, 2S5 developed ZVOF86 shot with a projectile-range over-RP-59, you can shoot at a distance of 30 km. According to information from the Western press, ammunition, «Hyacinth» comes round with a nuclear warhead small capacity 0.1-2 kT. Now in Russia developed a number of new 152-mm shells. Among them Cassette shell 3-0-13 with fragmentation submunitions, cluster bombs with self submunitions, Fully target sensors, missiles directors of active and passive radio interference.

Gun 2A37 is designed to conduct counter-battery fight the destruction of long gun emplacements and field facilities, and for oppression rears Fri management, to deal with the heavy self-propelled artillery and enemy tanks. Sights provide firing from the closed position and the open sights. ACS can be used in different climatic criteria. 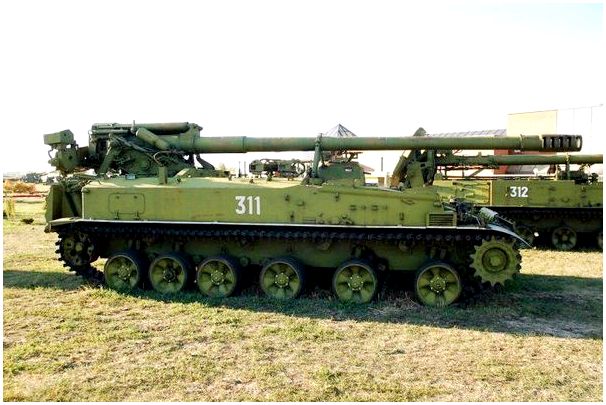 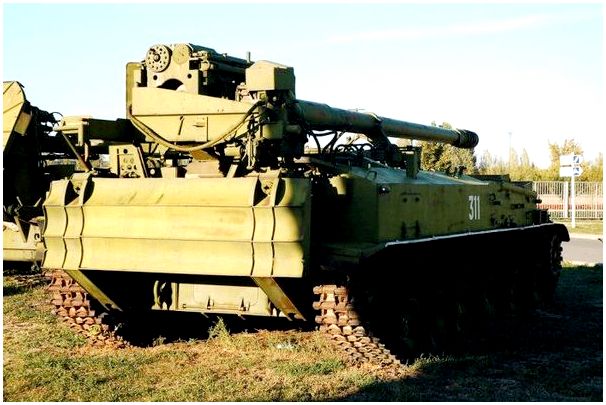 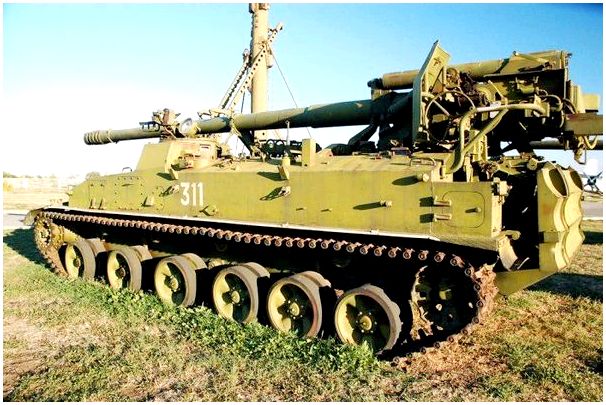 rate of fire, rounds per minute 5-6

Based on materials from the website of «Motovilikhinskiye factory»

0
Like this post? Please share to your friends:
Related articles
Interesting 0
Society Former candidate for participation in the presidential election Sergey Ryzhov said that he
Interesting 0
Everything you need to know to start cranking out cash with your PC BY
Interesting 0
«… Air Force Commander Alexander Novikov reported that the two are ready to
Interesting 0
Above the summit crater of the volcano in Alaska Cleveland workers, local observatory
Interesting 0
December 1. Annual capacity is about 180,000 cubic meters of finished products used, including
Interesting 0
Disclose Truth TV introduced a new TV show with the participation of experts: Tarpeya
Categories
SQL - 47 | 0,161 сек. | 10.88 МБ