German designers were rapidly assess the merits of the scheme Austrian languid armored car ADGZ 8×8, caught in their order after the Anschluss, in front of all the prevailing formula 6×4. A four scheme, not including significant growth in cross-country, allows you to position the chassis massive artillery equipment, additional equipment without significant losses in speed. Development of a four-chassis with a massive engine for the armored car was started in the middle of the 1930s. Management of Arms Army in 1934 signed a contract to develop an eight chassis with all-wheel steering and with the «Deutsche Werke». These chassis was to be the basis for the latest series of armored cars that could change the six-wheeled armored cars Sd.Kfz.231, previously made. 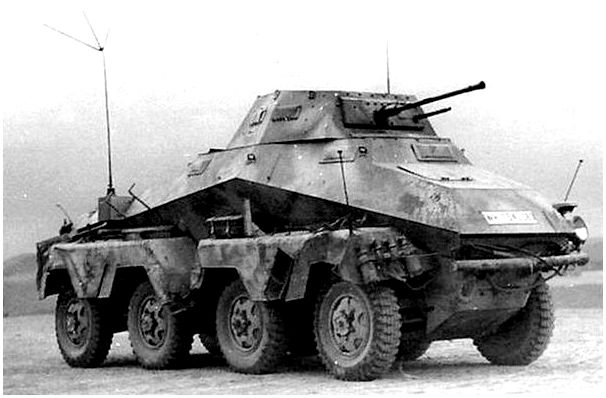 Full-scale work on the creation of a new all-wheel drive armored vehicles on four-axle chassis of «Büssing-NAG» (Bussing-NAG) began in 1935. Initially, models of new cars dubbed «Versuchskraftfahrzeug» 623 and 624 (experimental vehicle). In the middle of 1937 it was given the designation Sd.Kfz.231 and .232, and in October 1939 it was added to the ID 8-Rad, in order to distinguish from an eight armored vehicles with 6×4 with the same designation. The troops of these machines were naming Achtrad (Ahtrad). Batch creation of armored vehicles produced «« Deutsche Eisenwerke »(Kiel) and« F. Schihau »(Elbing). First worked to create a handheld device components and assemblies, the second — the final assembly.

In a family of armored vehicles were following modifications:

Sd.Kfz.231 (8-Rad), which become the premier weary Wehrmacht armored car during the second world war, built on the assembly scheme with a rear engine compartment, 2 control stations and 8×8. Two control station allowed if necessary to make a departure without turning armored car. I absolutely closed armored corps had fairly easy configuration. Welded housing intended rolled steel sheets of different thicknesses, which were installed with optimal angles. The thickness of armor plates depended on the vulnerability and the importance of the protected components and assemblies, and ranged from 8 to 14.5 mm. For additional protection, the bow of the machines installed armored shield (the so-called «Pakschuetz») width of 10 mm, which was attached to the body using the fasteners at a distance of 500 mm from it. The empty space between the body and used broneschitom crew to accommodate different equipment. In July 1942 broneschita increment thickness of 30 mm. A similar reservation is ensured crew (commander, gunner and two driver-mechanics, one of whom was also a radio operator) protection from bullets, fragments of shells and mines. In Sd.Kfz.233 armored car crew was reduced to 3 persons and consisted of: front driver, commander (also did duty radioman and gunner), loader (doing duty rear driver). The case consisted of military and security units. The power department took the back of the case, and combat — the front.

For boarding / landing crew members between the second and the third axis in the bottom of the sides of the armored cars were double entry hatches. Another flap was made in the front of the chassis in the top broneliste. Also landing in the car could be carried out in two tower hatch made in the back wall and the roof of the tower.

Management office was in the front of the chassis, the driver was located on the left. To facilitate the work of the driver in the cramped fighting compartment, the control wheel was equipped with articulation. Place the driver was equipped with a set of control devices that display the state of the engine and other components armored vehicles, as well compass, speedometer and clock. Took place right at least some member of the crew, which not busy. For front and rear driver was foreseen by four inspection hatch closing bronekryshkami. With all of this review to the rear of the driver’s limited motor hood.

From the engine to the wheels torque is transmitted through the box «Buessing-NAG» GS, consisting of a three-speed box preselektornogo type (three speeds forward and three reverse) with dual dry clutch, shift stage (increased the number of possible compositions to 24) limited-slip differential and a mechanical brake. Powerplant allow even that of the heavy armored vehicle (8,3-9,1 m) develop at highway speeds up to 90 km / h The highest speed on a country road was 30 km / h 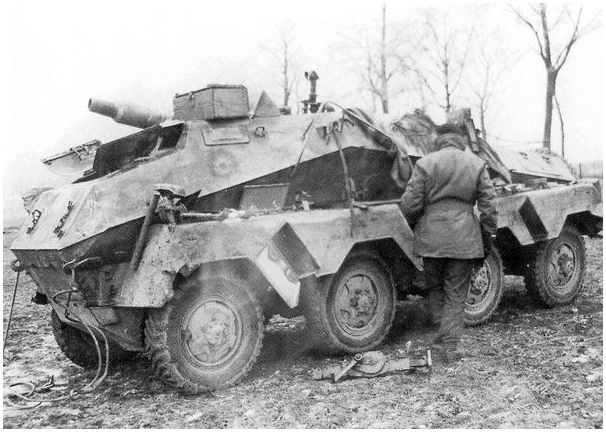 chassis with independent suspension on semi-elliptic leaf springs were used lean wheel. All-wheel drive armored cars Sd.Kfz.231 manageable because the machine had enough supreme maneuverability even in spite of a huge battle ground. When turning the machine turned all 8 wheels: the front fo ur — in the direction of the turn, the rear — in reverse. With all of this the front and rear pairs of turning a larger angle. Above each pair of wheels were made box-shaped wings, the void that used to house drawers for storage of tools and spare parts.

Armored Sd.Kfz.231/232 had welded turret, resting on ball bearings. Tower had no additional fastening to the body, but was equipped with a basket (Polycom) that swirled together with the tower. With this in place an armored turret commander (a job on the left side of the tower) and arrows (on the right) spinning along with it. The tower was installed the main armament of armored vehicles: 20-millimeter cannon 2cm KwK.30 L/55 or KwK.38 L/55 and 7.92-mm machine gun MG-34 or MG-42. Ammunition for the gun was 200 rounds, and the machine gun — 1300 rounds of ammunition. In the vertical plane of the arms is induced in the sector -10 … +26 Degrees. When lowering the lock barrel machine gun could be raised up to 37 degrees. At the side of the mask mounted gun sights. To monitor the surroundings used vehicle commander periscope bred on the left side of the tower through the roof. In 1940, the mask guns armored Sd.Kfz .231/232 subjected to significant revision. Sd.Kfz.232 were mounted on the turret front support frame-type antenna for the radio station Fu 12.

On Sd.Kfz. Tower 263 was missing. It was replaced with a spacious wheelhouse motionless, in what was installed only MG 34 machine gun (weapons could miss one hundred percent). This design decision was justified by the installation of large-size frame antenna. Apart from the antenna to the frame of the car was an extra retractable telescopic antenna height of 9 meters, placed behind the radio room. The introduction of large-size frame antenna significantly increment silhouette is already the highest armored car. This event did not satisfy the troops, because in 1942 on both swatches reconnaissance vehicles (232/263), it was changed to a small-sized whip. 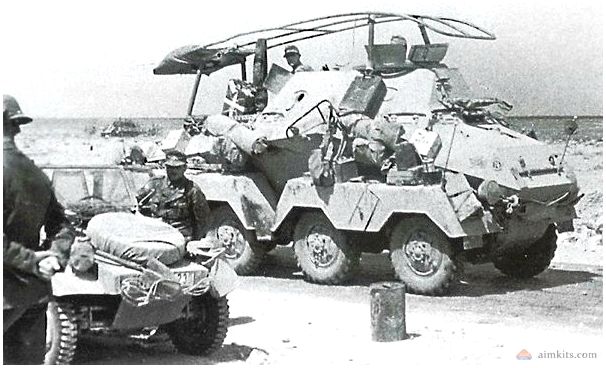 The tower was also missing and Sd.Kfz. 233, and its crew compartment was open. Gun (75mm KwK 37 of Rheinmetall-Borsig, the length of the barrel — 24 gauge) was placed in front of the compartment of the crew compartment on the right. The gun had electric trigger and vertical wedge bolt. Ammunition consisted of 32 rounds with smoke (reference speed is 455 m / s, the mass of 6.21 kg), high-explosive (initial velocity of 450 m / s, the mass of 5.73 kg), armor-piercing (reference speed is 385 m / s, the mass 6.8 kg) and cumulative (initial speed of 485 m / s, the mass of 4.44 kg) shells. Apart from this, over the fighting compartment was mounted MG34 machine gun 7.92 mm, allows for a fire not only on ground targets, and on the air. Ammunition gun — 1500 rounds of ammunition. Also inside of the armored car, like all machines of the family, were submachine gun MR40 and six hand grenades. On the front fender was fixed at 4 smoke bombs.

Armored Sd.Kfz.231/232 used for exploration and a proven track record in this role. These machines are not actually used to fight the enemy tanks in mind weak little arms and armor narrow, although there is evidence that armored vehicles entered a couple of times in battles with tanks allies, and triumphed. With all this cross cancel these machines allow them to move well not only on the highway (for example, a French-developed highway network can achieve at least some points of the country is not sliding down the pavement) and even on rough terrain. Sd.Kfz.232 perfectly showed themselves on the mountain roads of Yugoslavia and Greece.

It is their ability to reveal the German armored cars were able languid in North Africa. The structure of «Deutsches Afrikakorps» consists of two parts, armored vehicles kitted data: 33rd Recon 15th Armored Division and 3rd Recon 5th Light Division. In the spring of 1941 the 3rd Battalion distinguished himself during the coming of the German and Italian troops. Along with carrying out reconnaissance data armored vehicles took part in the fighting. Sd.Kfz.231/232 in the desert have been thoroughly tested, during which the identified advantages and disadvantages of machines. Shortcomings can be attributed to the missing engine cooling, as a large consumption of fuel, which limited radius of action.

On the Eastern front armored car of the family were squeezed. In 1-x, it appears that cross Sd.Kfz.231, which was awesome for Europe, for Russia was obviously insufficient. In-2, in the Red Army tanks were in a collision with which the German car had no chance. These criteria exploration was carried out, usually at medium tanks and armored cars were kept in the rear.

0
Like this post? Please share to your friends:
Related articles
Interesting 0
Society Former candidate for participation in the presidential election Sergey Ryzhov said that he
Interesting 0
Everything you need to know to start cranking out cash with your PC BY
Interesting 0
«… Air Force Commander Alexander Novikov reported that the two are ready to
Interesting 0
Above the summit crater of the volcano in Alaska Cleveland workers, local observatory
Interesting 0
December 1. Annual capacity is about 180,000 cubic meters of finished products used, including
Interesting 0
Disclose Truth TV introduced a new TV show with the participation of experts: Tarpeya
Categories
SQL - 57 | 0,386 сек. | 10.91 МБ