The German military industry of the early twentieth century, a huge variety of different and unusual implementation of schemes for the equipment and weapons. One of the noticeable development in the field of German drivers of armored vehicles was the family of reconnaissance armored chassis with wheel formula 8×8. It is surprising, but the German engineers in this area were not pioneers: the first in the world of four-armored car was created in 1934 by the Austrians, who have always been craving for unusual gear.

This is a very unique machine was designed and carried out by «Austro-Daimler» (Wiener Neustadt, since 1935 part of the weapons-grade concern «Steyr-Daimler-Puch»). Design was started in July 1931 as part of the creation of a three-axle truck army family ADG. First experienced unarmored standard armored vehicles was built in 1933. To control the chassis used CVT type «Voith» with a six-speed hydraulic gearbox (three speeds forward and reverse), borrowed from the all-wheel drive three-axle tractor ADAZ. 1st Armored reference was made in 1934. Seasoned lean ADAZ had wheels and octagonal tower with a revolving gun Schwarzlose M7/12 caliber 8 mm. Two more guns were located in opposite ends of the body. But the War Department required a change machine design (to reduce the length of the body), and the final version of the machine was introduced in January 1935. In December of the same year began the creation of the first batch of 12 armored cars.

Armored Car ADGZ had virtually symmetrical design of the case — at each end there was a place for the driver to be installed coursework machine guns and lights. Frame APC was in the form of a parallelogram (to reduce the weight of the entire structure spar frame was replaced by a profile of the cap frame with peripheral pushing pipes), which greatly facilitated the work of the managed front and rear wheels, and thanks to a special box machine able to move forwards, and backwards with the greatest speed. This quality was especially valuable during combat operations in the city streets and narrow country roads and forest, where it is difficult to perform a U-turn. Housing ADGZ of welded armor plates in width from 6 to 14.5 mm, which were installed at an angle of 5 — 75 degrees. Armor protects the crew from small arms bullets and guns was listed as fully sufficient when using the machine in police operations. The crew of the armored car ADGZ consisted of 7 members: commander, gunner, loader guns, two machine-gunner, two drivers (and later, after the machine into service SS second place driver reduced). For planting a four-door crew-served, made in the hull sides. The four armored car ADGZ had the following dimensions: length — 6260 mm, width — 2160 mm, height — 2560 mm. Ground clearance — 270 mm. 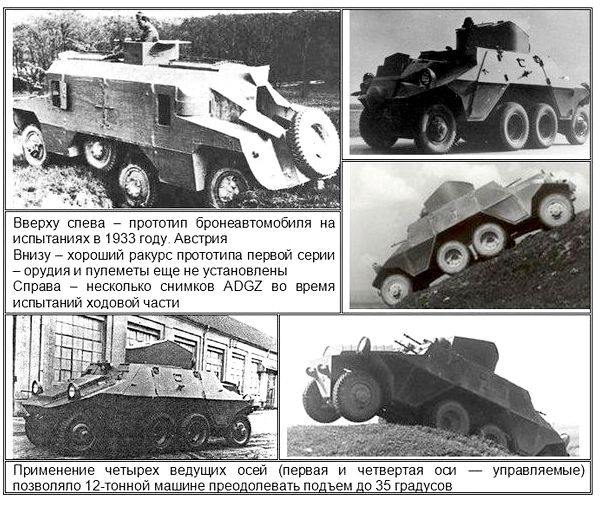 Aft of the carburetor was located 6-cylinder engine, «Austro-Daimler» M612 (cooling — liquid, cubic capacity — about 12 liters., Taken from the prime mover ADAZ). The engine, which develops at 1800 revs per minute up to 150 hp, and allowed a 12-ton machine move down the highway at speeds up to 70 km / h Progress in store for all that was 450 km. The highest fuel consumption (about 95 liters. 100 km) claimed the installation of 4 tanks, the total capacity of which was 210 liters. Not counting the motor located in the rear part of the box. Apart from that described just above the box, the box included a special range-type fluid coupling clutch «Wandler». The car had hydraulic brakes. At APC ADGZ all axes have been leading. Because after the installation gun arms in the center of mass increased weight, 2-wheel secondary axes were manufactured gable. As already mentioned the first and fourth axes are controlled. 8×8 allows the machine to climb to 35 degrees.

In the initial version, which was used Austrian army armored ADGZ main armament consisted of automatic gun «Solothurn» 20 mm caliber machine gun and «Shvartsloze» 7.92 mm, mounted in ball bearings separately in a welded cylindrical tower with a gable roof. In addition, in the front and rear sheets of the body was found two more guns Schwarzloze. Aim the cannon with a shoulder rest. Ammunition: 5000 rounds of machine guns and 250 rounds for the gun. Battlefield surveillance was carried out through peepholes, closing bulletproof glass. 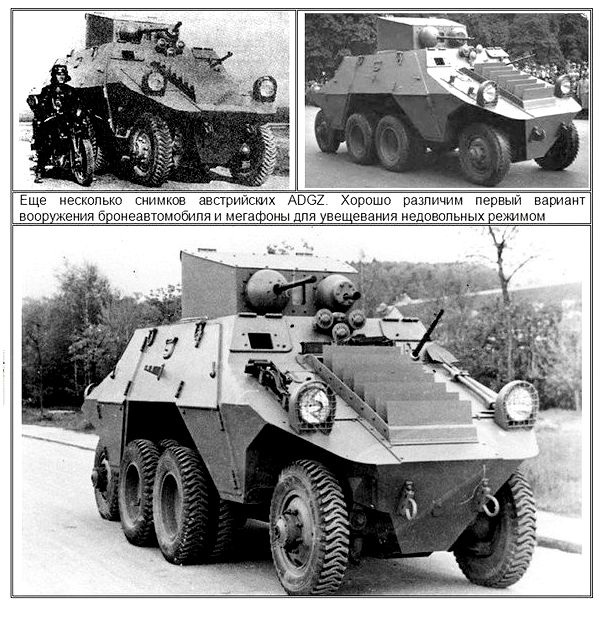 As mentioned earlier, the pre-production batch of armored ADGZ consisted of 12 cars. Mass, the creation of these machines was very limited — the Austrian army before 1937 received a total of 27 armored cars ADGZ. After the Anschluss of Austria, held in 1938, all military equipment and weapon were transferred to the Wehrmacht. In the German Wehrmacht, this car was given the designation «M35 mittlerer Panzerwagen». Initially, it was planned that they will be sold to Bulgaria or Romania, but because of understaffing armored equipment and a small amount of this idea was abandoned. Once finalized, which was reduced to the substitution of the Austrian cannon and machine guns on the German 20-mm cannon KwK 35 and MG-34 machine guns armored cars ADGZ were transferred to the SS police units.

In 1941, the Reichsführer-SS Himmler issued an order concern Steyr ADGZ armored vehicles at the ready for the Waffen SS. Already in the first part of 1942 was passed 25 cars collected from the devices stored in the enterprise. On the Eastern Front ADGZ used to guard the rear of communications, and to control the guerrilla units. Namely, ADGZ was armed 7th SS Mountain Division voluntary «Prinz Eugen» («Prince Eugene»), which operated in the area of Yugoslavia. It is clear that one armored car ADGZ 16 January 1943 troops captured the 3rd Panzer Army during the liberation Rossosh (Voronezh region) and the other in February 1944, has been hit by the first Ukrainian Partisan Brigade Kovpaka SA during the fight under Sedliytse (Poland). All armored vehicles ADGZ were destroyed in the fighting. 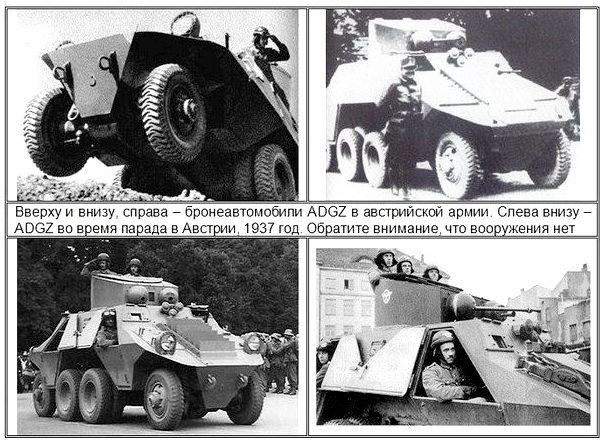 The performance properties of the armored car ADGZ: 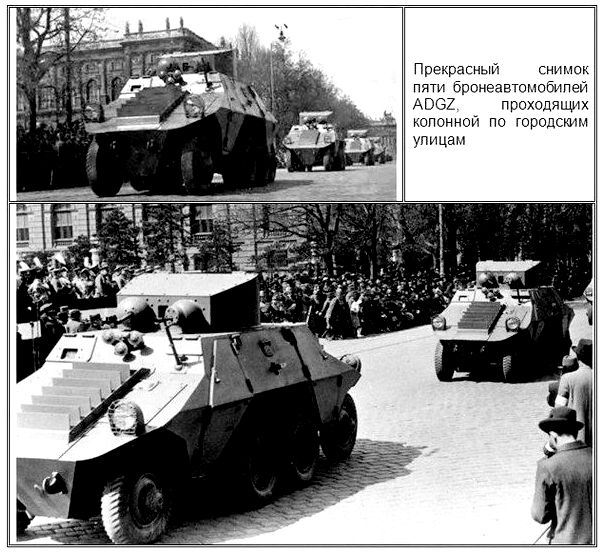 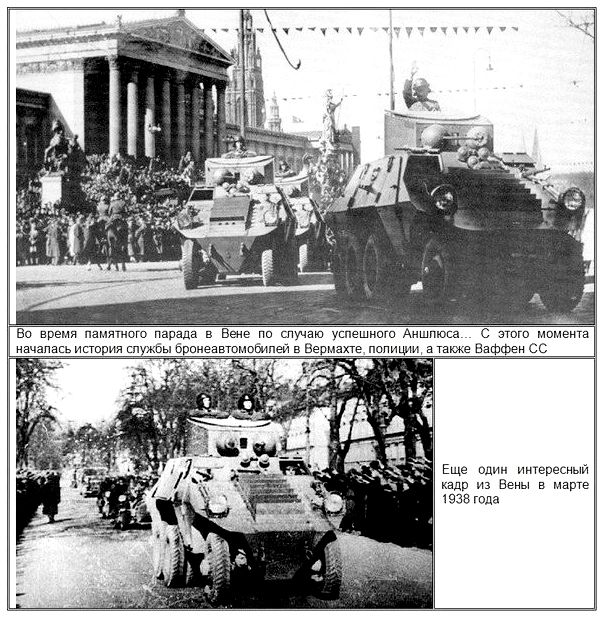 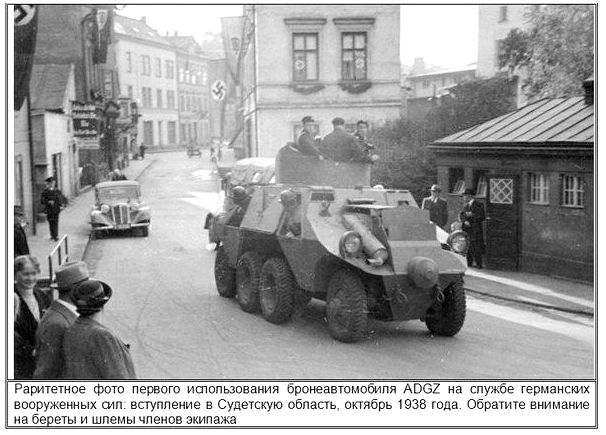 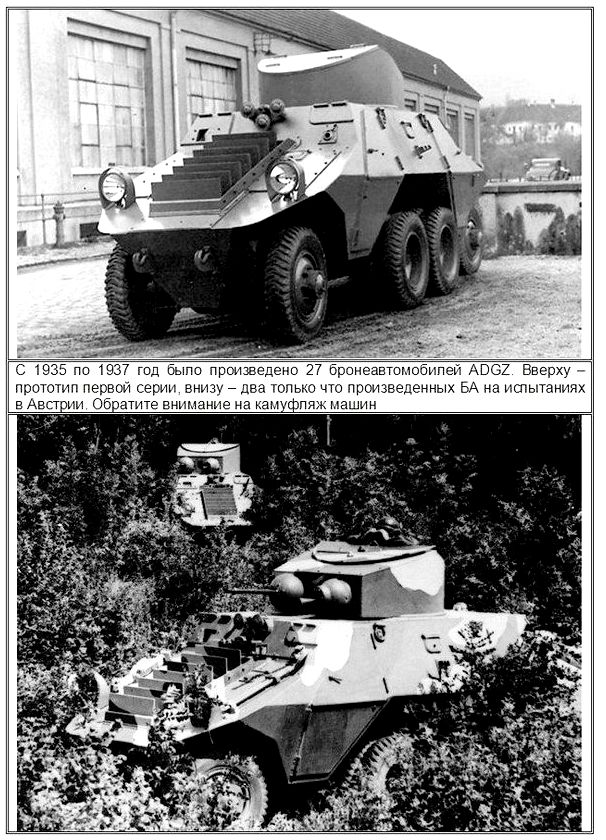 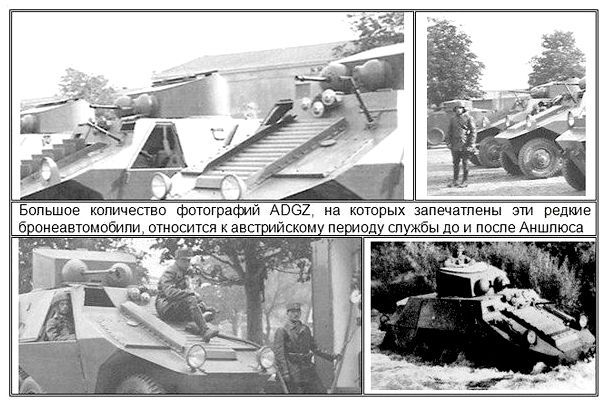 0
Like this post? Please share to your friends:
Related articles
Interesting 0
Society Former candidate for participation in the presidential election Sergey Ryzhov said that he
Interesting 0
Everything you need to know to start cranking out cash with your PC BY
Interesting 0
«… Air Force Commander Alexander Novikov reported that the two are ready to
Interesting 0
Above the summit crater of the volcano in Alaska Cleveland workers, local observatory
Interesting 0
December 1. Annual capacity is about 180,000 cubic meters of finished products used, including
Interesting 0
Disclose Truth TV introduced a new TV show with the participation of experts: Tarpeya
Categories
SQL - 54 | 0,173 сек. | 11.52 МБ