A prototype automatic guns AB-46 with the production index TKB-415, developed by the Tula Designer A. Bulkin, appeared in 1945. In the same year he participates in the competition GAU Russian Armed Forces of the Union, together with other instances of the new machine different design offices. After three years automatic TKB-145 is inferior in the ongoing competition of the prototype CB-P-580, which later become known as the AK-47. 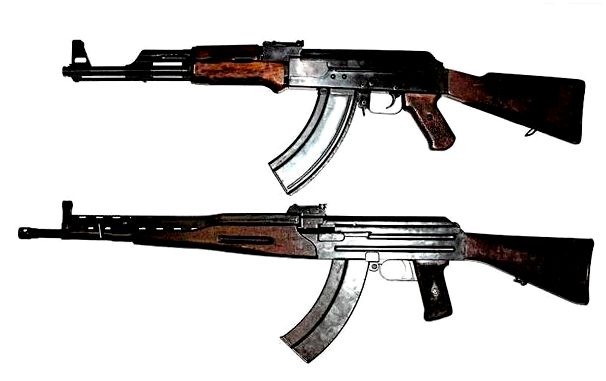 Competition for the creation of an automatic weapon — ammo Main artupravlenie announced at the end of 1943. This event contributed to the very notion technical advice of the People’s Commissariat of arms in the middle of 1943 captured German machine MKb-42 with its ammunition. 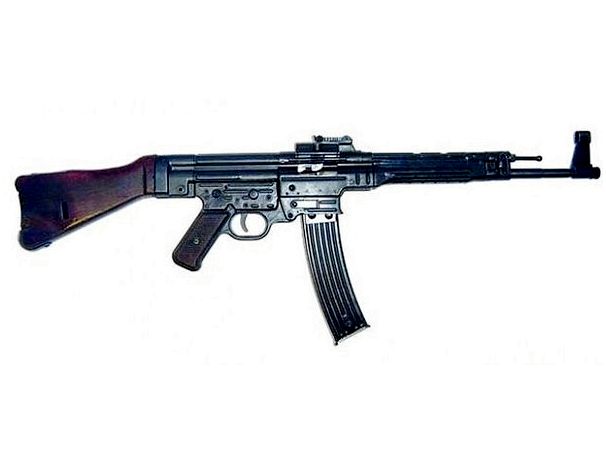 Russian equivalent of the German cartridge 7.62 mm with 41 mm length sleeves, received the title of the perineum, was created by Russian designers Semin and Yelizarov in incredibly small period of time — by the end of the year the cartridge was ready for testing. Later sleeve shortened by 2 mm.

All competitors have developed machines for the new Russian ammo. In the first contest winning score? A.Sudaevu designer — its development, automatic AC-44 rifle, weighing in at 5.35 pounds produced in series on the Tula factory. At this time, the AC-44 well-proven in tests in a 4-military area and was used by the occupying forces of the Union of Russian captured in Germany. The constructor is recommended to reduce the weight properties of AC-44. In the summer of 1945 GAC has announced the beginning of the second contest. A.Sudaev presented on it own advanced AS-44, or OSA. At this competition for the first time appeared in the middle of the contestants AB-46 Designer Bulkin. Lightweight automatic Sudaev now failed to show former properties, mechanical design Bulkina with some remarks passes competition and after completions able to take part in future trials. The sudden death Sudaev put bold cross on the future of his child AS-44, which was the obvious leader among the contestants. The remaining contestants with new efforts are beginning to fight for the championship of its own standard automatic guns. GAC considers the current situation and makes the tactical and technical requirements of the participants of the competition with the consideration of conceptual design of each machine before displaying the most experienced reference. After reviewing the sketches for admission to tests GAU selects only 5 projects. Here for the first time appeared Machine, designed by Kalashnikov. The standard automatic rifle design Bulkin was a favorite of almost 2.5 years undergoing tests. First, in 1948 all the tests at one hundred percent complete. AB-46 for the accuracy of fire small bursts was the only machine that fit into the requirements of GAU. On other features shooting also showed himself perfectly. Service, simplicity and ease of assembly and disassembly are not inferior to the Kalashnikov automatic rifle. Bulkin but failed to solve the problem of survivability and reliability of its own machine, which, in the end, brought to naught all his dignity. Results of recent trials have been recorded in the report of 10 January 1948, «Sample Design Kalashnikov automatic gun ammunition under the 1943 standard on many traits granted the GAC and is recommended for serial production with the conduct of military field trials. AB-46 machine gun designer Bulkina not come under the requirements of GAC and the main test is not passed. » 10-day final tests passed CB-P-580, known also under the name AK-47. It is possible that precisely because of continued support for the management, as well as the introduction to the AK-47 parts of the structure of AB-46, and was won competition ammunition for machine-GAC. Because in 1949, the armament take 7.62 mm Kalashnikov machine designer at index 56-A-212. Automatic tool designer Bulkina mass was not carried out, but it has brought its own unique contribution to the now most famous AK-47.

Design and mode of actions of AB-46

Bulkin created automatic on the mechanism of automatic gas operated with the implementation of the flue assembly above the barrel. For locking the barrel was used principle of the rotation speed. The device is not provided for venting the regulator. Locking assembly consists of a valve stem rod, which ends of the gas piston. The trunk has a gate opening in which to do the battle turning larva with 2 stops fighting type. When driving the gate of the stem at first he turns the battle bot, bringing its two lugs of the coupling with the supports of the breech, the forthcoming movement of the stem is taken up by a battle bot. For the direction of movement of the stem are made folds pressed the shutter box type with a greatly reduced area of contact, which gave the moving AB-46 rather weak sensitivity to contamination. Power supply ammunition comes from the sector 30-round magazine, placing ammunition — chess with double-row feed. Top is made of steel with a narrow shtamposvarki.

The trigger mechanism of a hammer type is made with the interception trigger. Interception hammer — pretty normal mechanism, without separation unit with the trigger sear for firing single shots. Rolls back the barrel breech cocks, which in this position captures the spring-loaded stop trigger pull. When tempered trigger trigger intercepts sheptalny projection trigger. The trigger mechanism allows the arrow to fire bursts and single shots. Fuse-translator of the flag-fire mode is located on the right side of AB-46 on the tiller over the trigger. The last of the samples submitted AB-46/TKB-415 machine had a short barrel 10 cm thumb safety-translator is made on the left side of automatic weapons, which was a great comfort to transfer your right thumb. Aiming devices — adjustable front sight with a ring-type protection against impact and scope of sector type.

All in all trials, two options were AB-46:

— AB-46 with the butt of the wood for the main armament of troops;

— AB-46 with a folding butt on the right side of the unit for special purposes and airborne units.

The main properties of AB-46:

— quantity of ammunition in the store — 30 units.

0
Like this post? Please share to your friends:
Related articles
Interesting 0
Society Former candidate for participation in the presidential election Sergey Ryzhov said that he
Interesting 0
Everything you need to know to start cranking out cash with your PC BY
Interesting 0
«… Air Force Commander Alexander Novikov reported that the two are ready to
Interesting 0
Above the summit crater of the volcano in Alaska Cleveland workers, local observatory
Interesting 0
December 1. Annual capacity is about 180,000 cubic meters of finished products used, including
Interesting 0
Disclose Truth TV introduced a new TV show with the participation of experts: Tarpeya
Categories
SQL - 52 | 0,269 сек. | 11.53 МБ