The majestic man-made river — greatest ambition of his own project of Libya — is a network of water pipes that supply the arid areas and the northern industrial part of Libya’s purest drinking water from underground reservoirs oasis located in the southern part of the country. According to estimates-independent professionals, it is the world’s naikrupneyshy engineering project from existing at the present time. A little-known project explained by the fact that the Western media actually covered it, and yet the project was ahead of its own price naikrupneyshie event in the world system: project cost 25 billion dollars.

Gaddafi started the project back in the 80s, and by the time the current fighting, he was actually implemented. We note in particular: the construction of the system was not spent a penny of foreign funds. And this fact is certainly suggestive, because control of aquatic resources is becoming an increasingly important factor in world politics. Is the war in Libya segodnyaschy first war for drinking water? After waging war really have something! The functioning of the man-made river is based on water intake of 4 aqua tremendous reservoirs located in the oases Hamada, Kufra, Morzuk and Sirt and containing about 35,000 cubic meters. km artesian water! Such a volume of water would absolutely cover the area of the country such as Germany, with all the depth of the reservoir itself would be about 100 meters. And according to recent studies, the water from artesian springs Libyan enough almost 5000 years.

Apart from this, this Aqua project in its scope can rightly be called the «Eighth Wonder of the World», as part of its transportation provided 6.5 million cubic meters of water a day through the desert, a cool way that increases the area of irrigated desert land. Project Man-Made River is not comparable to that produced Russian leaders in Central Asia in order to irrigate its cotton fields, and that led to the Aral Sea disaster. Fundamentally opposed Libyan irrigation project is that for the irrigation of agricultural land is used virtually inexhaustible underground rather than surface water source, just undergoing severe harm for small clearance time. Transporting water is closed by means of the use of 4 thousand kilometers iron pipes, buried deep in the ground. Water is pumped from the artesian basin to 270 mines with a depth of several hundred meters. One cubic meter of crystal-clean water of the Libyan underground tanks, taking into account all the costs of its production and transportation of the Libyan state is only costing only 35 cents, which is roughly comparable to the price of a cubic meter of cold water in a large town of, for example, in Moscow. If we take into account price cubic meter of drinking water in the European countries (about 2 euros), the price supplies of artesian water in the Libyan underground reservoirs is at most approximate estimates, nearly 60 billion euros. Agree that a similar volume continues to rise in the value of the resource may be the enthusiasm of much more serious than oil. 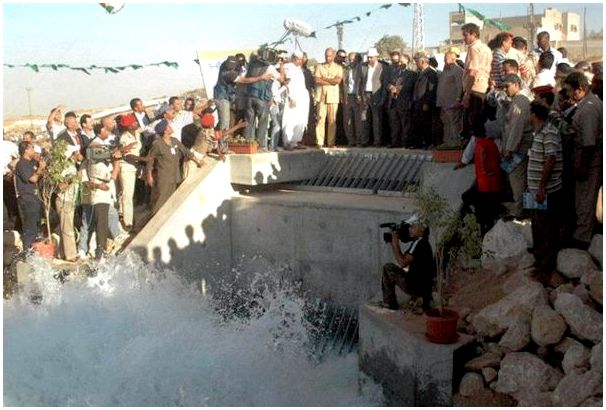 Before the war, man-made river irrigate about 160000ga intensively reclaimed for agriculture. And to the south, the terrain Sahara, derived on the surface of the canals serve as a place of livestock watering. And most importantly, drinking water were provided with a large country town, namely the capital Tripoli.

Here are the important dates in the history of the Libyan irrigation project «The Great Man-Made river»In 2008, Guinness World Records recognized CONCTACTS naikrupneyshim in the world:

• October 3, 1983year — was convened General People’s Congress of Libya, and held an emergency session, which was announced funding for the project.

• August 28, 1984 — Favorite Libya lays in starting construction of the project the first stone.

• August 26, 1989 — It starts with the second step of the construction of the irrigation system.

Due to the fact that the adjacent country of Libya, including Egypt, suffer from a lack of aquatic resources, totally reasonable to imagine that the Jamahiriya with its aqua project was fully able to significantly expand its influence in the region, starting in the adjacent countries of the green revolution, and figurative , and in the literal sense of the word, since the expense of irrigation fields most of the North African problems with nutrition in Africa have ventured very rapidly, providing the countries of the region’s economic independence. And the appropriate samples taken place. Gaddafi called for intensive farmers of Egypt to come and work in the fields of Libya. 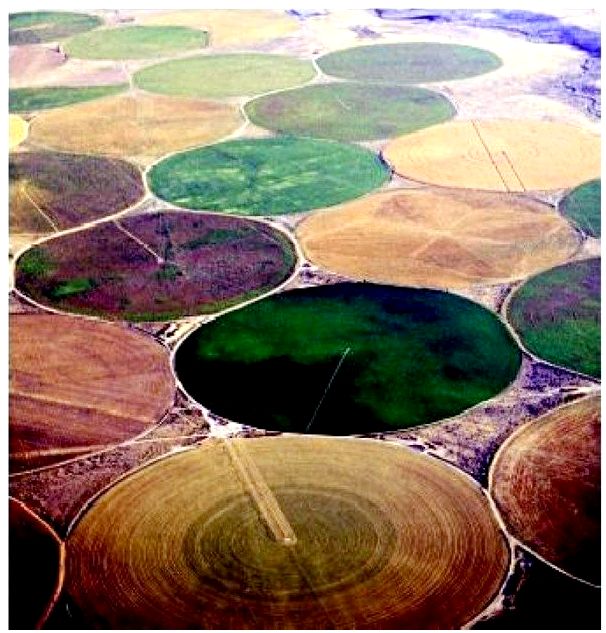 Aqua Libya project was a true slap in the face throughout the West, after all, and the Global Bank and the U.S. State Department are promoting them only profitable projects such desalinizatsii sea water in Saudi Arabia, the price of which is 4 dollars per cubic meter of water. Of course, the West is beneficial lack of water — it maintains its higher price.

Noteworthy that, speaking at the celebration of the anniversary of the start of construction of the river, on September 1 last year, Gaddafi said: «Now that is an achievement of the Libyan people was a natural, the threat of the United States against our country will double!» Apart from that, a couple of years back Gaddafi stated that the Libyan irrigation project will be «the most serious response America, which constantly accuses Libya of sympathy for terrorism and the existence of oil money.» Very soft-spoken fact was support for this project and the former Egyptian President Mubarak. And this is probably not a coincidence.

0
Like this post? Please share to your friends:
Related articles
Interesting 0
Society Former candidate for participation in the presidential election Sergey Ryzhov said that he
Interesting 0
Everything you need to know to start cranking out cash with your PC BY
Interesting 0
«… Air Force Commander Alexander Novikov reported that the two are ready to
Interesting 0
Above the summit crater of the volcano in Alaska Cleveland workers, local observatory
Interesting 0
December 1. Annual capacity is about 180,000 cubic meters of finished products used, including
Interesting 0
Disclose Truth TV introduced a new TV show with the participation of experts: Tarpeya
Categories
Подробное описание изорок купить у нас.
SQL - 47 | 0,285 сек. | 10.88 МБ