The available information for 1945, Russian engineers started building the project languid tank. This design of the tank meant the elimination of recognizable defects and introducing new solutions to the model languid tank:

— placement in a tank crew: a driver — the front of the tank gunner and commander of the machine — the front part of the tower installation is charging — rear turret, the commander and gunner respectively (placing the vehicle commander is not the case — so Makar, provides a more comprehensive review, the presence of in the tank 2 charging should provide an inflated rate);

— niche of the tower has a pocket in which positioned the ammunition for the gun. This placement may be for different types of ammunition, which also leads to increased rate;

— in addition, fencing gilzootvoda provided centering chuck, a spring-loaded roller rocker, which reduced the acts of loading and increases the rate of fire;

— gun used in the construction of a distant spetsnasadku nozzle, which accelerates the munition under standard properties of guns and ammunition;

— to counter air targets at service outlet of the 1st set of charging polubronirovannuyu small-caliber gun, secured Shoulders articulated to improve hum. The firing of machine guns mnogokalibernogo this does not affect the performance of tasks of the tank crew — shooting is one of the charging. This design carried out in a languid swatch of the tank;

— spetspodnozhka the rocker arm manually-foot run provides a good treadle turns horizontally in the tower part of the electric or hydraulic performance;

— used to rotate the turret either way Ampledin Ward Leonardo. Redundant steering control is the commander of the machine;

— accurately calculated structural and technological tools to install the tower part of the tank — used box-shaped frame with a trunnion mounted on a cradle guns. The very frame is welded to the cradle, which significantly reduces the likelihood of problems with the installation of instruments inside the tower;

— breech-loading mortar mounted on a tank provides dymomaskirovku tank, the possibility of introducing such fragmentation mines against enemy personnel;

— part of the tower has three flap — the commander and loader, which increased the time-to-entry crew and ability to service mnogokalibernogo machine gun;

— it is possible to set the commander freely spinning hatch;

— weapons sights — Breaking monocular scope with a broad overview and an increase for the guns, and the sighting collimator sights for mnogokalibernogo machine gun;

— to improve ventilation applied suction gas from the crew compartment of empty cartridges that are emitted from the breech of the gun tube enclosing the barrel outlet with the use of the fan;

— General ventilation is used for blowing fan and is located on the instrument;

— air supply units in the tower part can be further from the air propulsion to slave;

— to adjust the seat to the vehicle commander rotary type with spetspodnozhkoy;

— virtually all the ammunition located in the tower, to increase the rate of fire;

— probable course of the underwater tanks, why have applied a flexible hose with a float tube for absorbing engine;

— when submerged in a tank during the foreseen increase in the pressure to minimize the ingress of water inside;

— can be frisky removal tool for this tower equipped with hatches in its niche;

— way to ensure the survivability and growth of its speakers used the rollers supporting such enormous size. 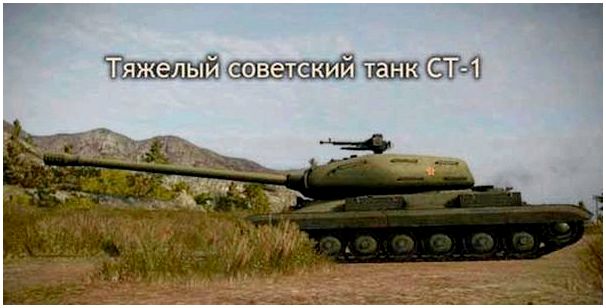 Leading the project engineers — Chasovnikov and Garin. Tank ST-II was designed as a powerful armored vehicle with a quick-firing gun mnogokalibernym. This design has continued to develop CT-1, and the main differences between grazed improved accuracy of fire and increased rate of fire weapons:

— guns are served with 2 charging, which ensures the highest rate of 2-guns;

— Tank can accurately and rapidly hit the target of the second gun, so zeroing out the other instruments;

— when the chance of breakage of the 1st guns, shooting lasts a second instrument — tank quite legal competence;

— armor, power control, the weight of the tank to a single gun had doubled — increasing accuracy and shooting on the move;

Martial traits such tank should eclipse the same type of tank 2. On other features, components and assemblies ST-II project follows the tank CT-1. 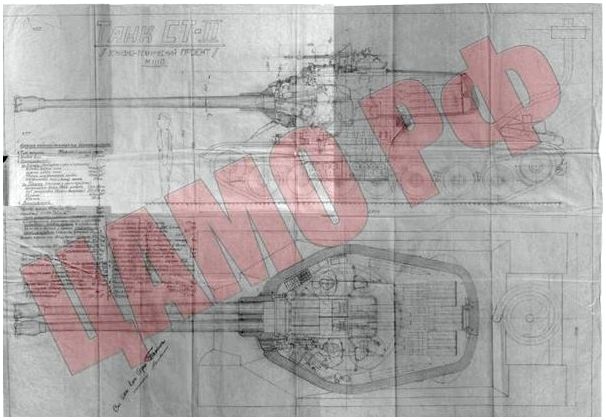 Comments for the project

In the case of 395 TsAMO Russian Federation, which houses the project, there are a few comments made, most likely someone from the military: «This tank is a meaningful project creator succeeded without making critical configurations that make a tank with the main feature — the inflated rate and the resulting hence the positive things, «» Competent and finished the project, the creator of well versed not only in tank, and in weapons for the tanks. «

Ganin VA worked on the «Bolshevik» from 1942 to 1945. Was a senior engineer Artillery Design Office number 92. Ganin was better known as a rocket scientist-engineer — the creator of the underwater missile launch. Engineer Ganin is the creator of 62 works on a number of fronts: artillery, aircraft, missiles, etc. He has 24 certificates of copyright. A competent and qualified engineer. But in the case of projects ST-1 and ST-II, repeated the story WASP-76 and the tower Savin. The project is not bad, but not the creator of his own design office, there is no help from famous people then. So popular love tank gunners played a significant role — project was «ridiculed» and soon forgotten. But what kind of tank that could be …….

0
Like this post? Please share to your friends:
Related articles
Interesting 0
Society Former candidate for participation in the presidential election Sergey Ryzhov said that he
Interesting 0
Everything you need to know to start cranking out cash with your PC BY
Interesting 0
«… Air Force Commander Alexander Novikov reported that the two are ready to
Interesting 0
Above the summit crater of the volcano in Alaska Cleveland workers, local observatory
Interesting 0
December 1. Annual capacity is about 180,000 cubic meters of finished products used, including
Interesting 0
Disclose Truth TV introduced a new TV show with the participation of experts: Tarpeya
Categories
SQL - 47 | 0,488 сек. | 10.88 МБ