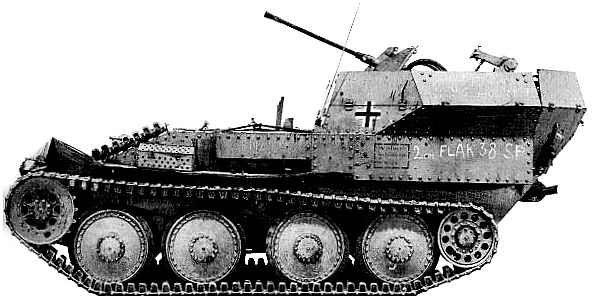 Anti-aircraft tank Flakpanzer 38 (t) — the last setup, developed based on the chassis of the tank Pz.Kpfw. 38 (t) modification of M. Chassis and vehicle hulls are the same as that of the Sd.Kfz.138 and 138/1 Ausf. M, but the self-propelled collected riveted even despite the fact that the plant BMM by the end of 1943 tried to make more use of welding. Bronekolpak been made out of the driver’s casting, as of early self-propelled guns and tank destroyers. Felling anti-aircraft compared with chopping tank destroyer or ACS shifted back and had even the smallest height. Open top cuttings created 10mm armored plates. Feed and side wall cutting recline to a horizontal position. This configuration of the fighting compartment made it possible to conduct fire on ground targets of 20 — millimeter automatic anti-aircraft gun Flak 38 with the highest carbon reduction -5 degrees. Specifically, before the gun was set two frames, which limited the downward angle of the delivery of fire forward. This is done to rule out the possibility of defeat projectiles front of the unit casing. Due to the location of the rear cabin was likely to increment nadmotornye removable panel for easy maintenance. At the same time, more complicated access to the radiator sharply now to reach it one had to remove the bottom of the cabin a few panels.

According to those. assignment, anti-aircraft fire was due to be radial. Twisting cannon, mounted on a round pedestal, was installed in front of the crew compartment. The unit is equipped with a shield of the gun, the gunner’s seat and gilzopriemnikom. Armor cuttings provided protection against shrapnel and bullets calculation of four: the gunner, commander / radio operator, two loaders. With all the crew remained vulnerable to air attack. Radio equipment — a radio station Fu 5. The initial plan foresaw the construction of 150 anti-aircraft tanks filled with a 20-mm automatic cannon, but before the end of the design order has been reduced to 140 units. 10 units built as a 150-mm self-propelled guns. One is stitched and 140 machine gun mount built as the tenth series Ausf. M. In November 1943, the first installation out of their industrial plant and by the end of the year was transferred to the customer 101 anti-aircraft self-propelled gun. The remaining 40 units of equipment delivered in January and February 1944. 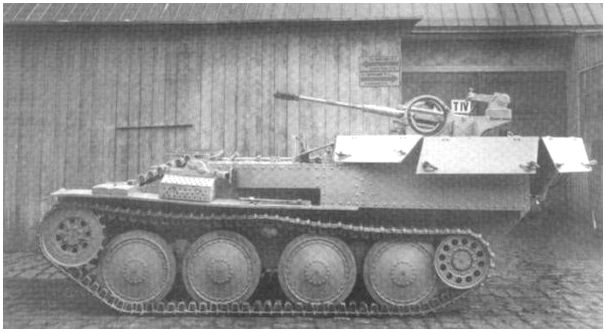 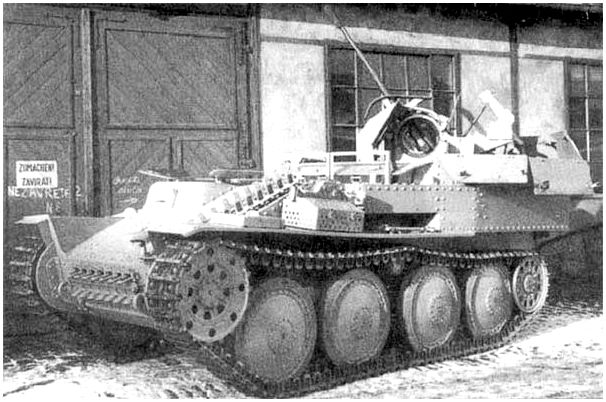 AA Tank was the lightest in the middle of settings made on the base of the tank 38 (t), it weighs 9.7 tons, due to which the machine had better cross and developed the largest at the fastest speed. But the only gun was unable to provide a sufficient volume of fire while firing at air targets, even when used by a group of machines. But we must note that Flakpanzer 38 (t) — the crotch option. Machines of this type in service departments of several divisions were relatively kutsee time. Not counting the Sd.Kfz.140, there was another anti-aircraft tank on the chassis 38 (t), but no known incident of its creation. According to documentation from the factory in 1944 provided for conversion of two machines are not installed in such self-propelled anti-aircraft gun.

Evidence that this work done, photos are made in May 1945 in Prague. In these photographs were sealed and camouflaged installation Sd.Kfz. 138/1 «Grille», not kitted 150-mm guns and automatic guns Mk 103 30 mm caliber. Mk 103 gun having a rate of 460 rounds per minute, the company Rheinmetall developed for installation on the aircraft. There was also the AA version of the gun. The installation of these self-propelled guns on improvisation and was not intended for mass production. Self-propelled guns in the last months of the war were in service units, the number of which could not be established. In the post-war Czechoslovak documents both self-propelled «Grille», equipped by 30-millimeter cannon Mk 103, referred to as «German trophy technique.»

Deliveries ZSU Flakpanzer 38 (t) began in November 1943. One set Dec. 16 surveyed Hitler gave the order to take the most immediately rather short period of anti-aircraft weapons tanks on armored divisions. Forms the anti-aircraft platoons began in February 1944, on the formation of the platoon was withdrawn 10 days. Under the plan, every 10 days, had formed two platoons consisting of 12 anti-aircraft tanks. Each platoon had three squads of four cars each. Usually, the two groups were at the disposal of division headquarters and other anti-aircraft tanks were set up for the air defense headquarters tank regiments. Most of the ZSU Flakpanzer 38 (t) fell to the newly formed Second Armored Division in France, training and the first 20 Panzer Division. Apart from this, anti-aircraft tanks supplied to arm the elite SS Panzer divisions such as the first «Leibstandarte Adolf Hitler», the second «Das Reich» Twelfth «Hitler Youth» and the Seventeenth «Goetz von Berlichingen.» Sd.Kfz.140 platoon received Ninth «Hohenshtaufen» and the tenth «Frundsberg» SS Panzer Division fought on the Eastern Front. By the ten divisions in April 1944 were considered as the machine with the chassis number 2894, № 2897, № 2898, № 2908, № 2910, № № 2920-2923, № № 2927-2929 — only a certain number of machines units documented. In July 1944, the 9th and 10th SS Panzer D ivision was transferred to France, but data transfer with them there is no anti-aircraft guns. Immediately with the divisions that were on the Eastern Front in France, in other words the spring 1944 , the anti-aircraft tanks also received four divisions are in Italy. It was a 20 Sixth Panzer division, 20, ninth and Ninetieth pantsergrenaderskie Division, also aviation Field Division «Hermann Goering.» 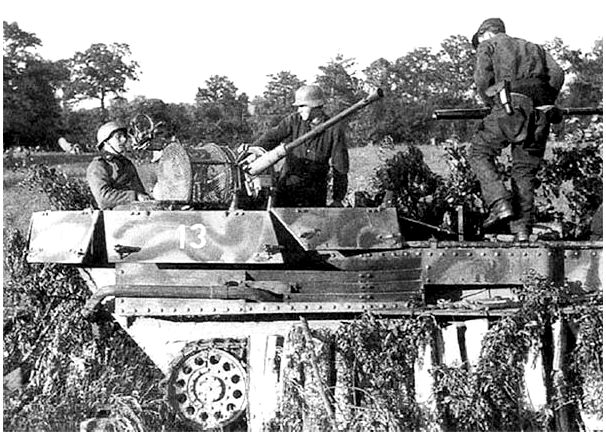 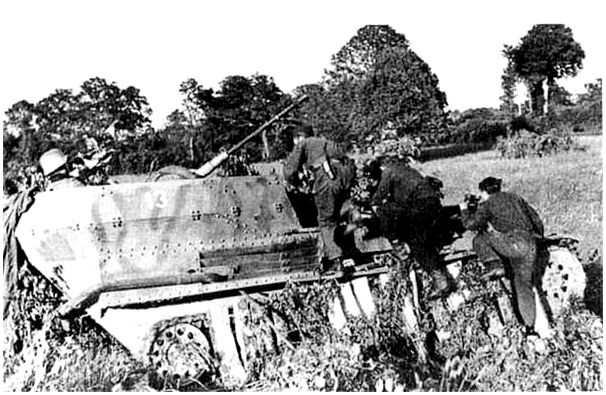 In the first day of the Normandy landing of the allied forces, June 6, 1944, some anti-aircraft platoon came under massive attack aircraft. Tankers-aircraft gunners next two months trying to defense from Allied aircraft, which dominated the skies over France. By the end of July 1944, according to reports, all the divisions in the general difficulties have lost 12 aircraft. These losses were small, given the scale and intensity of contractions. With the increase of the supply of better machines defense on the chassis Pz.Kpfw. IV, filled with one automatic gun, 37 mm or 4-20mm cannons, tanks Sd.Kfz.140 started shooting with weapons warheads front page. Despite this, in some divisions ZSU Sd.Kfz.140 remained in service right up to the end of 1944. So, for example, in the 2nd Armored Division had three, and in the Seventeenth pantsergrenaderskoy Division — 6 ZSU. In the first half of 1944 were activated fighting in Italy. As a result of air strikes anti-aircraft tanks suffered significant losses that are not replenished.

The layout — front office management and transmission compartment in the center of the separation of management, rear crew compartment;

0
Like this post? Please share to your friends:
Related articles
Interesting 0
Society Former candidate for participation in the presidential election Sergey Ryzhov said that he
Interesting 0
Everything you need to know to start cranking out cash with your PC BY
Interesting 0
«… Air Force Commander Alexander Novikov reported that the two are ready to
Interesting 0
Above the summit crater of the volcano in Alaska Cleveland workers, local observatory
Interesting 0
December 1. Annual capacity is about 180,000 cubic meters of finished products used, including
Interesting 0
Disclose Truth TV introduced a new TV show with the participation of experts: Tarpeya
Categories
SQL - 47 | 0,219 сек. | 10.89 МБ