Chur our ancestors was not the deity of the highest rank, but his name is still known and honored everywhere. He was honored patron and savers borders agrarian holdings. 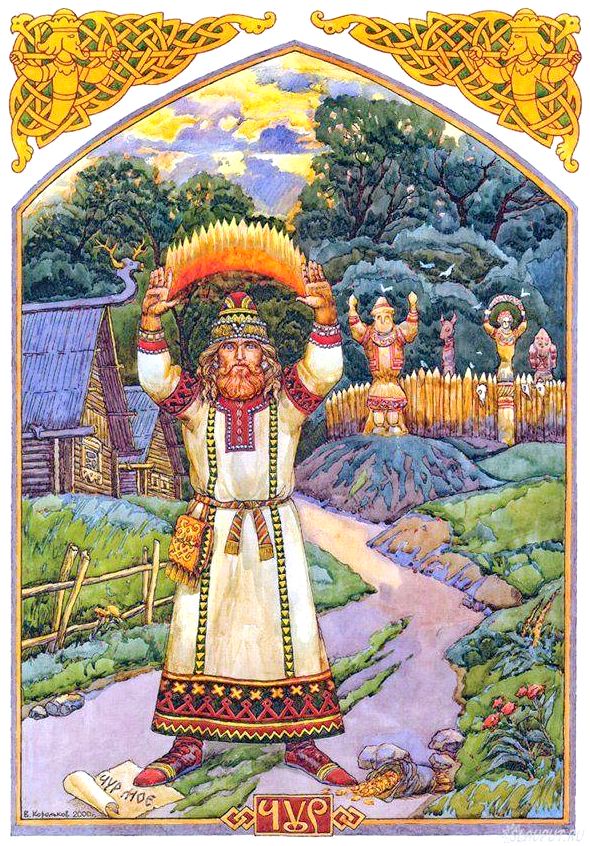 The furrows of their plots farmers piled mounds enclosing their stockade, and this hill no one could dig out of fear of angering a deity. Barrier strip is sacrosanct, no one could cross it willfully.

On certain days, the head of family ownership of the rounds on the line sang hymns and brought gifts of god, here, at some distance from each other, were placed large rocks or tree trunks, wore the name terms. In the pit, which states the term, put hot coals, corn bread, loaves, fruit, honey, and poured the wine. Everything was Churu is subject, and the place where he held sway, and sometimes appeared, receives a mysterious dedication, and because of the line of tribal lands did not dare cross the hostile spirits.

Later in the furrows began to put the image of the Chura.

Despite the crudeness of the work and the insignificance of the material from which they cut down, they are considered sacred and inviolable. On fields reclaimed from the dense forests and the boundless steppes, Chur guarded property boundaries, different hosts, kept daring to willful violators, others stopped Razgulyaev plow, Tupile expenses ax.

Chura embodied in a wooden image that took shape kruglyashami, short obrubochka hand thick. On. It carved symbols denoting the owners of a piece of land. These stumps preserved its ancient name in certain words, surviving to the present day: block of wood, block, chock, churbashka.

Chur also protect man and his good and evil forces: as a resident of passersby — pedestrians roads, he had more power over all devils. In areas still advised to remember that God and zachuratsya, saying, «Keep off me!», That is to ask:

«Chur, Take care of me,» Even the secret thoughts of a person he protects. If someone tells you something unpleasant, zachuray him: «Keep off your tongue» — and evil wishes come true. Well, you will find something of value and do not want to share with anyone, he immediately prayed, «Chur, my» — and good old god poberezhet your discovery for you alone.

One of the key of the gods of the Slavic pantheon, whose true value is destroyed by the Christian tradition and can be restored only partially scraps tales and proverbs. The root of the «mind you» in Russian is known for good. Wooden block of wood indicating the limits of tribal and clan lands. In primitive minds Slavs they got magical significance and briefly termed «churami.» The dictionary meaning V.Dal edges, borders, boundaries, boundary, edge, redistribution, the measure (adverb too, ie, «beyond measure,» recently wrote «a chur«). The spell even more archaic meaning of «mind you,» when trying to use it to take evil spirits, «Chur, I», «pax», «Chur, not me!» To Churu and treated as a deity and a fair measure division, «Chur, half», «Chur, together!» etc.

Currently Chur known as God of property rights protection, the patron boundaries intact obereganiya, home. His responsibilities include protecting mezhey, the boundaries of land and generally limits. Chur guarded clan and tribal ownership, and the impure forces could not cross their borders. On the boundaries, the boundaries of their possessions, our ancestors put a statue carved on it symbolic tribal marks, considered sacred. Chur protected person from any «damage», «evil forces.»

However, it is known that Chur — one of the few names of the ancient Slavic god, whose functions are exactly the same as the Greek Hermes. P.A.Bessonov ((4 (16) June 1828, Moscow, Russian Empire — February 22 (March 6) 1898, Kharkov) — Russian Slavic scholar, folklorist, publisher collections of Bulgarian, Serbian, Russian folklore. Belonging to the «Ruthenian «historical direction.) definitely point to the undoubted fact of similarity between the Russian spell at the declaration of individual rights to the discovery or production -» Chur, together «- and its semantic equivalent of the ancient Greek, literally translated as» common Hermes! «According to experts, linguists, «The word ‘chur‘ Eastern Slavs and Bulgarians meant penis, which is equal to the true original meaning itifallicheskogo cult of Hermes.» In ancient Greece, just installed the border and travel columns, called herms.

Chura hermetic nature manifested in his ability to travel by air, and most importantly, a distinct sexuality that image (similar to the God of excited Phallus — Hermes and similar Yarily): The negative meaning associated with taboo Chura, embodied in the contemptuous nickname — chock, block, etc. In Slavic languages there are direct analogies with Hermes: Erma or Hermias, cognate names Yarema (Polish version — Yarema), [T] Yermolai, Hermogenes, and the famous Ermak

0
Like this post? Please share to your friends:
Related articles
Interesting 0
Society Former candidate for participation in the presidential election Sergey Ryzhov said that he
Interesting 0
Everything you need to know to start cranking out cash with your PC BY
Interesting 0
«… Air Force Commander Alexander Novikov reported that the two are ready to
Interesting 0
Above the summit crater of the volcano in Alaska Cleveland workers, local observatory
Interesting 0
December 1. Annual capacity is about 180,000 cubic meters of finished products used, including
Interesting 0
Disclose Truth TV introduced a new TV show with the participation of experts: Tarpeya
Categories
SQL - 50 | 0,241 сек. | 11.31 МБ