ZSU in the absence of air defense troops, one of the saddest moments in the history of the Red Army. After the end of World War II in the Soviet Union was engaged in serious error correction. The most famous in the world has become a ZSU Russian ZSU-23-4 «Shilka», but not many people know that she was stronger, the brother of ZSU-37-2 «Yenisei».

In place of Hopes ZSU-57-2, armed with 57-mm cannon with Hrabinska loading the oboymennym, April 17, 1957 the Council of Ministers Decree № 426-211 perceives the development of new rapid-self-propelled anti-aircraft «Shilka» and «Yenisei» with radar guidance systems. It was our response to the adoption service in the U.S. M42A1 gun mount.

Formally, the «Shilka» and «Yenisei» were not rivals because «Shilka» designed to provide 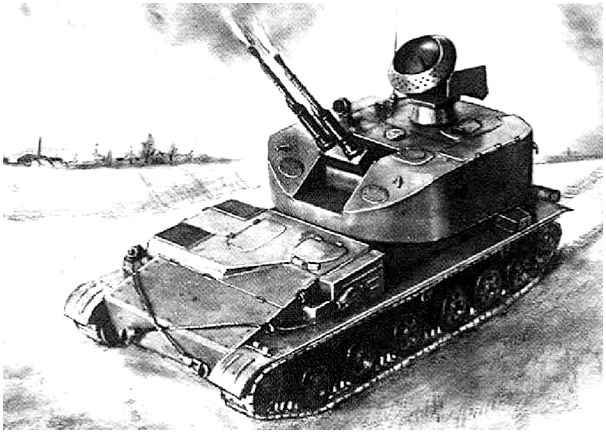 For the ZSU-37-2, the OKB-43 was developed by a 37-mm twin anti-aircraft gun «Angara». It used two machine 500P, developed in OKB-16. «Angara» was a tape system supply system of liquid cooling machines and electro-hydraulic servo actuators.

But in the upcoming planned to change their purely electronic actuators. The drive systems are developed guidance: CRI 173 GKOT Moscow (now the Central Research Institute of AH) — through the power servo drive of the guidance, and Kovrov subsidiary CRI-173 (now the Institute of «Signal») — to stabilize the band of sight and the band shot.

I’ll tell you — on the tests revealed that neither «Tobol» to «Shilka» or «Baikal» to «Yenisei» can not quite fine without the help of other search aerial target. Because even in the Council of Ministers Decree № 426-211 on April 17, 1957 envisaged the creation and submission to the municipal tests in the II quarter of 1960 mobile radar complex «Ob» to control the ZSU.

Complex «Ob» included a command vehicle «Neva» with the radar target detection «Irtysh» and the PKK «Baikal», located in the ZSU «Yenisei». Complex «Ob» had to control the fire 6 — eight ZSU. Resolution of the Council of Ministers dated 4 July 1959 work on «Obi» were prekrasheny time to accelerate operational development of anti-aircraft missile system «Circle».

Chassis for «Yenisei» was designed in KB «Uralmasha» under the GS Efimova on the chassis most experienced self-propelled SU-100P. Making it planned to deploy at the Lipetsk Tractor Plant.

ZSU «Shilka» and «Yenisei» parallel tests are passed, though for different programs when testing.

«Yenisei» had the kill zone range and the ceiling close to the ZSU-57-2, and in accordance with the committee on the state tests «provide cover for armored forces in all forms of combat, in other words, means of air attack on the tank forces increasingly operate at altitudes up to 3000 m. «

Standard mode shooting (Tank) — continuous line of up to 150 rounds per gun, then a break of 30 seconds (air cooling) and repeating the cycle until exhaustion of ammunition.

During testing it was found that one SoL «Yenissei» exceeds the battery’s own performance shestiorudiynuyu 57mm guns from the battery 60 and SoL 4-57-2. 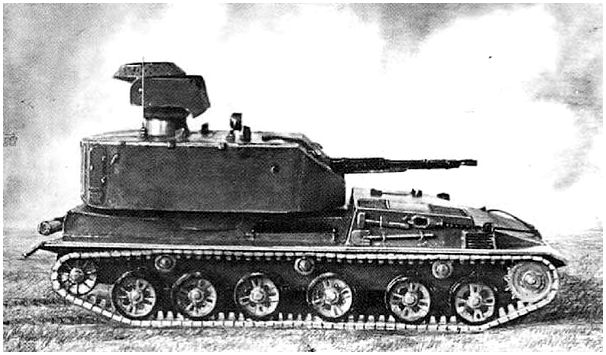 During testing of municipal gun «Angara» made 6266 shots. Marked by two delays and four failure, accounting for 0.08% and 0.06% of delays breakdowns of the number of shots taken, which is less acceptable on the tactical and technical requirements. During the tests, faltering CDS (protection equipment from clutter). Chassis showed excellent maneuvering characteristics.

— 40 deg / s, the horizontal — 60 degrees / sec. The transfer to the embattled regime of preparatory

According to test results ZSU «Yenisei» was proposed to use it to protect the army anti-aircraft missiles «Circle» and «Cube», as the effective area of fire «Yenisei» overlaps the dead zone of the SAM. 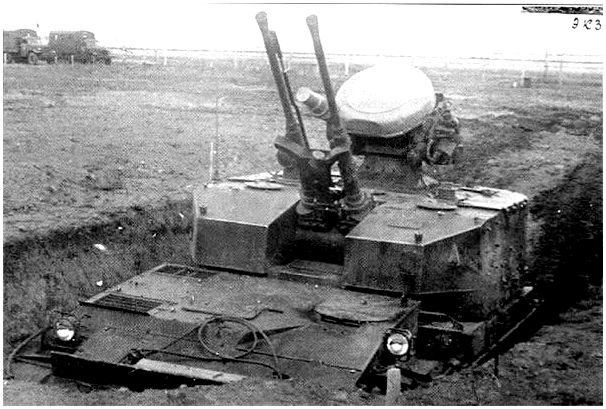 After the end of the municipal trial «Shilka» and «Yenisei» state commission could see the comparative properties of both ZSU and gave the conclusion of understanding.

Here are some excerpts from the conclusions of the commission:

— «Shilka» and «Yenisei» equipped radar system and provide days of shooting and NIGHT MODE at least some weather.

— Weight «Yenisei» 28 tons, which is unacceptable for weapons and airborne infantry units.

«Yenisei» is designed for air defense regiments of tank and armored divisions on subsequent judgments:

— Tank units and connections are in the main apart from the main group of troops. «Yenisei» provides tracking tanks at all steps of the battle, on the march and in the field, provides an efficient fire at an altitude of 3000 m and at ranges up to 4500 m This setting virtually eliminates sharp bombing at the tanks, which «Shilka» fails to provide.

— There are quite a massive high-explosive and armor-piercing projectiles, «Yenisei» can lead a more effective fire of self-defense against ground targets on a journey to battle formations of armored forces.

According to the «Shilka» — 23-mm gun and shoots him are in mas s production. Tracked base Su-85 is on the MMP.

According to the «Yenisei» — PKK is unified on the modules with the «Circle», based on the track — with the SU-1 PLO, the production of which 2-3 are preparing the plant.

As in the above extracts from the test reports and conclusions of the commission, as well as in other documents, there is no precise justification priority «Shilka» in comparison with «Yenisei». Even the price was comparable to them:

The Commission recommended to adopt both ZSU. But the decision of the Council of Ministers on September 5, 1962 № 925-401 adopted adopted a «Shilka» and on September 20 of that year followed the order GKOT the cessation of work on the «Yenisei». According to some reports, to abandon the works of «Yenisei» NS Khrushchev’s son Sergei assured him. An indirect confirmation of the sensitivity of the situation was that a day or two at close of work on the «Yenisei» appeared on a similar order GKOT awarding organizations working on the «Yenisei» and «Shilka».

The number of machines 2

Length of the longest line of the 1st machine, rds. 150

Control and guidance — radar sighting system 1A11 «Baikal» 1RL34 with radar and television-optical sight designed by NII-20 SERC. Standardized modules for equipment with equipment SAM «Circle». According to the results of acceptance tests of the experimental standard (completed August 10, 1961) noted that it is not debugged hardware protection against passive interference. When working at low-flying targets RLPK higher accuracy than radar SON-9A.

The rate of target tracking vertically — up to 40 deg / s

While making the refusal radar — 25 hours (up to state testing)

While making the refusal RLPK — 15 hours (up to state tests, requirements TTT — 30 hours) 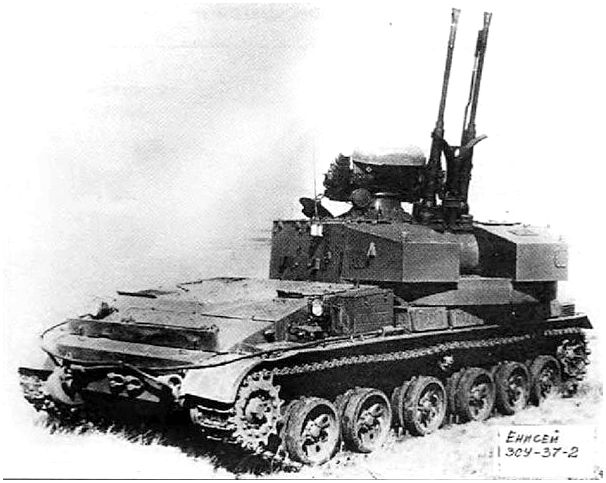 Shooting at moving targets in nazmnym likely using television-optical viewfinder, on the spot — with the introduction of the sight-doubler and hydro.

Resolution of the USSR Council of Ministers № 426-211 on April 17, 1957 provided for a mobile radar system to detect targets and target «Ob» with the transfer of the complex to the tests in April-June 1960 Complex «Ob» included in the part of the commander’s own car «Neva» with radar targeting «Irtysh» with the attached PKK «Baikal» ZSU. Complex «Ob» had to control the fire ZSU 6-8 «Yenisei». Develop a set of «Ob» discontinued USSR CM Resolution of 4 July 1959

The range of wavelengths — centimeter (about 3 cm)

Chassis — tracked 6 stoney «Object 119» Bureau of Plant Development «Uralmash» Chief Designer — G.S.Efimov. The chassis was created based on the chassis of SU-100PM (105M product). Mass was supposed to lead the creation of the chassis at the Lipetsk Tractor Plant. Suspension — personal torsional with telescopic hydraulic shock absorbers on the front and rear sites.

Book — Bulletproof (provides protection from placement of ammunition 7.62 mm bullet B-32 from a distance of 400 m).

Weight of the unit:

Progress in store (for fuel):

The cooling system of trunks — liquid

The possibility of defeats the purpose of the MiG-17 at a speed of 250 m / s at different heights (obtained by calculation errors that are accepted by the developer for the series of manufacturer):

Penetration at normal at different distances:

Equipment: power is supplied by a gas turbine electric generator design NAMI, provided spirited willingness to work at low temperatures, there is no anti-nuclear defense of the crew. Radio Station — P-113. Night vision devices commander and driver — TKN-1 and TVN-2.

ZSU-37-2 modified — revised design of the facility began in 1962, changed the chassis with the addition of the 7th rink applied Melkozvenchataya brand new track with RLL and step truck 110 mm, manufactured housing configurations. A set of documents deposited.

The distance between the centers of the top rollers — 6195 mm

The history of modern anti-aircraft defense of. Website http://www.sinopa.ee, 2010

0
Like this post? Please share to your friends:
Related articles
Interesting 0
Society Former candidate for participation in the presidential election Sergey Ryzhov said that he
Interesting 0
Everything you need to know to start cranking out cash with your PC BY
Interesting 0
«… Air Force Commander Alexander Novikov reported that the two are ready to
Interesting 0
Above the summit crater of the volcano in Alaska Cleveland workers, local observatory
Interesting 0
December 1. Annual capacity is about 180,000 cubic meters of finished products used, including
Interesting 0
Disclose Truth TV introduced a new TV show with the participation of experts: Tarpeya
Categories
SQL - 49 | 0,258 сек. | 11.5 МБ