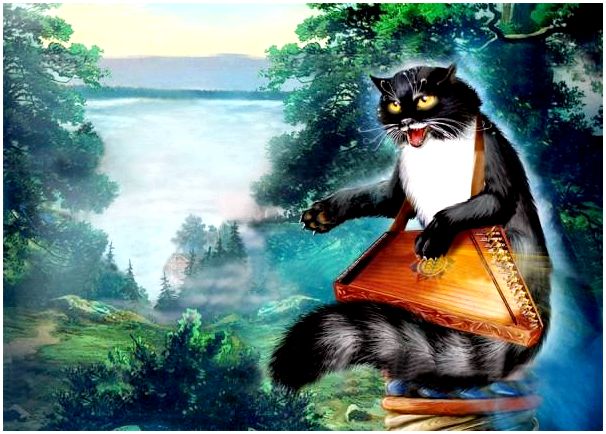 Velez — one of the main gods in the Slavic pantheon. Faithful companion of Veles, it is considered a sacred animal furry cat. It is believed that the cat — Beast Velez. In old Russia cat appeared in the role of the creator, and the role of the destroyer. One of the main areas of its activity — saving the home. But that’s not all — the cat in Russian is also a guide to the underworld.

In Russian tales, largely emerged from the Old Church Slavonic, a cat — one of the main characters, and perhaps the most intelligent animal. Well-known cat Baiyun himself resigned Tales, has a unique voice (audible over seven miles), could have their songs as enchant to death, and cure of diseases. Although Pushkin Science Club goes from right to left, in the Russian mythology, he walks up and down. And not on a tree, and an iron pillar.

Ivory Baiyun speaks and lulls coming up with fairy tales of travelers and those who have not enough strength to resist his Wizardry and who was not prepared to fight with him, the cat-witch ruthlessly kills. But the one who can get the cat to find salvation for all diseases and ailments — Tales Baiyun healthily. By itself, the word Baiyun means «talker, a storyteller, rhetorician,» from the verb bayat — «talk, talk,» that is — Bayan. In the tales say that Baiyun sits on a high, usually an iron pillar. Inhabits the cat to distant lands in fairy kingdom or in a lifeless dead forest, where there are no birds, no animals. In one of the tales about Vasilisa the Beautiful Cat Baiyun lived with Baba Yoga. 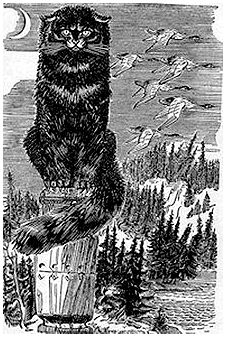 There are many tales, where the main character is given an assignment to catch the cat, usually those jobs were given in order to ruin a good young man. The meeting with this fabulous monster threatened imminent death. To capture the magical cat, Prince Ivan puts iron bell and iron gloves. Requisitions and seized animal, Prince Ivan delivers it to the palace of his father. It defeated the cat begins to serve the king — Tales affects heal king lulling words.

In slavyanskskh Believe Ground Cat (Cat or underground) protects treasures. In the tales told about beliefs Bazhova Ural miners in which Ground Cat protects underground wealth — ores and minerals. Cat lives underground, sometimes only you can see her ears …

According to a widespread version, European word «cat» is derived from the African — «Cadiz». It is believed that the first domestic cats from Egypt, from where they were brought to ancient Rome. And then it starts Curious cat name. First, in many Indo-European languages, the word «cat» sounds a lot like: cat, cat — the Slavs, Kate — the English (cat), boat — from the Germans (kater), sha — the French, but spelled — chat, Catto — the Prussian (catto), the category — the Lithuanians (kate), kake — Latvians (kake), Kotka — the Bulgarians. Latin for wild cat called catus (cattus). 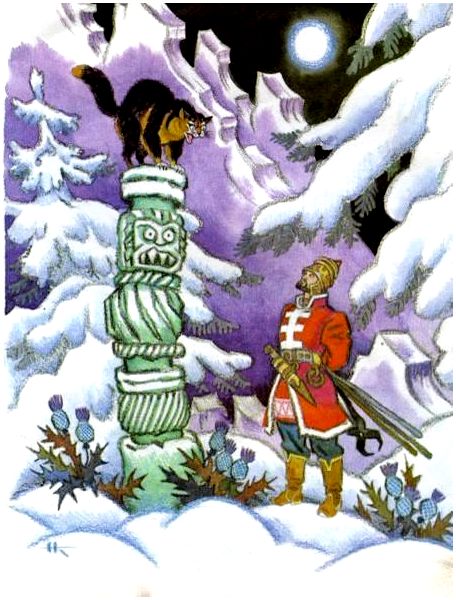 Are all of these names have influenced severoafrikonskie borrowing? Hardly. The basis of the word «cat» in the ancient Europeans, so much the same way it sounds in many languages. The word «cat» is very closely connected with a very important verb denoting birth — kitten, is also an integral part of the word for the animal baby — catulus (in Latin).

Really, what we’re talking about that «animals give birth.» For our ancestors, this expression was not acceptable. Could give birth to a woman. The fact that the word «birth» — a sacred and magical. Slavs it is related to the great God multiply our race — Native (or Rudra the ancient Indo-Aryans). Cat, like all animals, including small, can only kitten. Kotyatsya except cats, goats, sheep, hare, rabbit, cows and other animals.

A pregnant cat called on ancient «sukotnaya.» Between the words cat, cattle, lambing (breeding animals) have a connection, perhaps dating back to the early years of breeding in Europe, approximately 4.6 to millennium BC. At the same time, by the way, shaped and ancient Indo-European languages. The word «cat» or «cat» is translated from the ancient European languages should mean «to give birth or giving birth.» Point to a direct link of the ancient «Murok and Vasek» the cult of fertility. 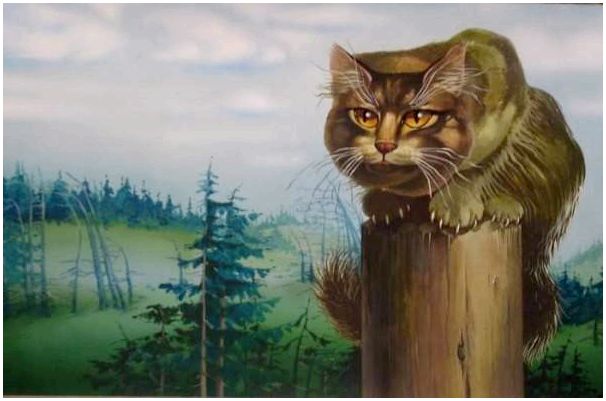 The proof of this version are the popular beliefs about the cat among the ancient Germans. The image of the cat they have performed the goddess of love, motherhood and fertility Frey, wife of the sun god Freyr. Nothing surprising here. High reproducibility of offspring of a cat is well known.

In Russia, the most common names of our pets were Murka and Vaska. Why Murka — clear, purrs a lot. But why, then, do not call the cat Moore (he hums not worse), Ivan and Peter, namely, Basil? This is where the mystery of the cat entered the second name for us, Russian. But it is associated purely with traditional Vedas (knowledge).

Prior to the introduction of Christianity in our ancestors worshiped God Almighty Navevogo kingdom, cattle, wealth, and all the forest animals — Veles. Velez could take images of various animals, as long as the beast was a shaggy — bear, for example. Ivory is the companion of God Veles, a sacred animal, and it involves a lot of customs and rituals. 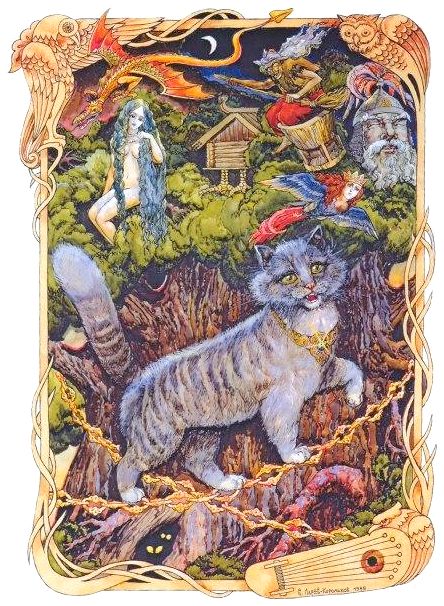 After the introduction of Christianity in paganism persisted for a long time, until it’s Confession escape. But the name of Veles was forbidden, and began to take an ancient god in the mind of the image of St. Blasius Rusich (as in Veles name from the word «hair») or St. Nicholas. Blaise was the patron saint of cattle, as Velez. But in honor of St. Blaise in the villages and began to call cats Vasko — in memory of Veles. Then the root cause, of course, forgotten. Therefore, when referring to Their Highnesses meows will remember that each of them has a great spirit of Veles.

In Russia, the image of furry cat — Veles satellite — was associated with houses. Brownies, the faith of our ancestors, have different titles, and each is responsible for his: who bath house or who is behind the stables, a barn. To this whole fraternity house ancestors treated with trembling respect. The main house-sometimes called hranilnikom. Brownie keeps order and friendly, but can also speed up the end of death.

Special mysticism always surrounds the construction of new housing. It definitely needed a gift to the spirit of new buildings. Without the ritual offerings to the new settlers and their families awaiting death. Who was the first threshold — a magical feature — the cross, with the mystery of the fate of risks faced. So was born the custom of the house to let the first cat, a beast that is associated with the mighty Veles, master souls of men and animals. Let in the cat, saying: «That’s you, the owner, a shaggy beast of a rich yard.» And goes over the threshold of the cat Vaska, protecting the people from all the vicissitudes of life, to take care of all ills. 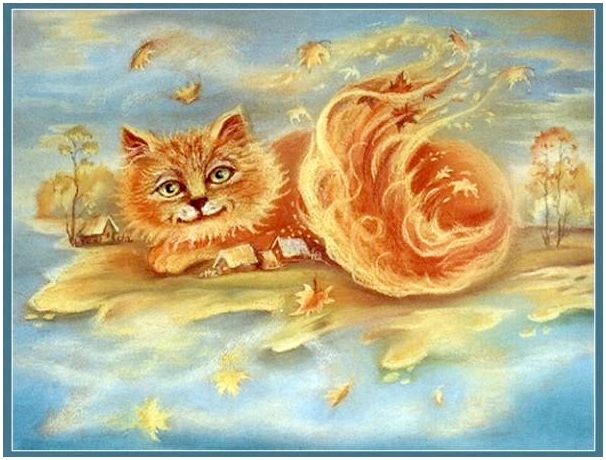 For the barn on the farm meets the other houses — ovinnik. He feared, because it has power over the fire element. In the barn bread, dried straw, and the stove is. A little something goes wrong, vzvoet wild dancing flames die yield. Your house-it will not cause harm, but, believe me, fires occur due to the fault of others ovinnika, which slanders owners brings misfortune. His task ovinnika-brownie was and is and is not a stranger to stop sometime, but with the help of fiery embers. The image ovinnika-defender stands always a black cat.

With sorcery and magic and color of the cat is connected. The white color is a bond with the dawn, black — with the night. Generally black cat hard luck. This color smoke, evil forces. However, such an attack on the cat collapsed, apparently after the spread of Christianity, in which all that hairy, pagan, — is associated with the devil. In the pagan Slavs of this fatal attitude to black cat no.

If night fell upon the breast gray cat — a house presses. It is necessary to immediately ask, «For better or for worse?» — And listen to the answer.

Still preserved in Russia, the belief that in the unfortunate house cats are not kept, and who will kill a cat, to seven years in what luck to be seen. Who loves and takes care of cats, that this cunning beast protected against any «useless trouble.» 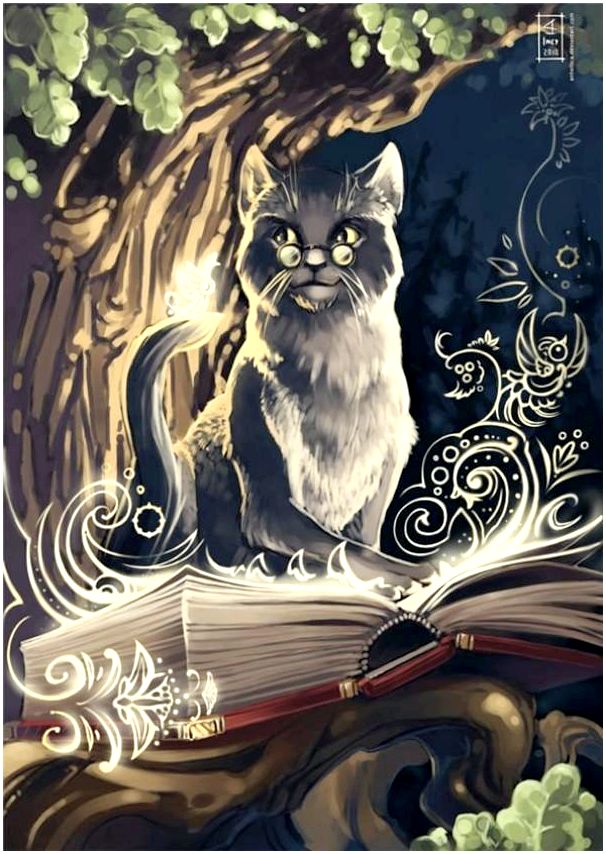 Many other truths connected with this animal, many signs and proverbs. Without cats hut. A mouse and a cat beast! Cat fight — mice expanse! Who loves cats — will be a wife to love! Cat attacked the arrogance, does not want to get off the stove! Cat loves milk, but the stigma short!

There are many sayings related to the disposition, habits of cats that have been applied to all sorts of phenomena of human life: They frets — that a cat with a dog! — Talk about a grumpy married couple. He wanted a cat cake! — Hint at someone’s dubious generosity. Worship and a cat in the legs! — Warn the proud, who are destined to break his arrogance, pride.

On national signs: the cat curls up in a ball — to frost, fast asleep belly up — to heat, scraping paws wall — to the wind nepogozhemu, floor — a blizzard, washes — to the bucket, licking tail — the rain, the man pulls — new clothes (greed ) promises.

As with the fire of the hearth, and connect with the cat marks the arrival of the guests, if a cat washes or raking claws, the expected guests, and if at the same time it has cold feet — the guests will be strangers and unwanted, and if feet warm — then come and friends relatives.

There is a sacred belief that the cat is so tenacious that only the ninth death and may kill her to death. 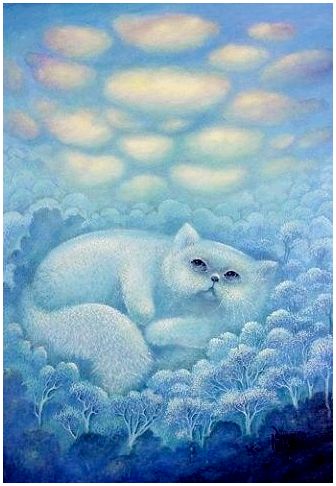 Many puzzles to think about this enduring totem animal: Four chetyrki two rastopyrki one Vertunov, and two Yakhont.

Domestic cats have appeared in Russia before our ancestors became Christians. The earliest information about domestic cats give archaeological finds on the territory of the former USSR. Here are some data reported Karpov in his’ Treatise not only a cat «(Yearbook» On land and at sea, «1987).

Scientific progress to fix a domestic cat from the Black Sea to the north of severe slow. Thus, archaeologists found the remains in Kirovograd, Odessa and Cherkasy regions belong to the II-V centuries AD. But again, only one copy in the three villages. However, already in excavation related to the VI-VII centuries, archaeologists record the appearance of cats in Pskov, the Baltic states and cities near Yaroslavl. In VII-IX centuries this animal enters the area of Staraya Ladoga and in the Middle Volga. Although the old times one of the images is the master of the forest cat.

Cat also plays an important role and the Goddess Makos. In this article — there is no question that Velez in the cat, the cat most of his companion, as treat navemu spirit world.

0
Like this post? Please share to your friends:
Related articles
Interesting 0
Society Former candidate for participation in the presidential election Sergey Ryzhov said that he
Interesting 0
Everything you need to know to start cranking out cash with your PC BY
Interesting 0
«… Air Force Commander Alexander Novikov reported that the two are ready to
Interesting 0
Above the summit crater of the volcano in Alaska Cleveland workers, local observatory
Interesting 0
December 1. Annual capacity is about 180,000 cubic meters of finished products used, including
Interesting 0
Disclose Truth TV introduced a new TV show with the participation of experts: Tarpeya
Categories
SQL - 52 | 0,471 сек. | 11.53 МБ