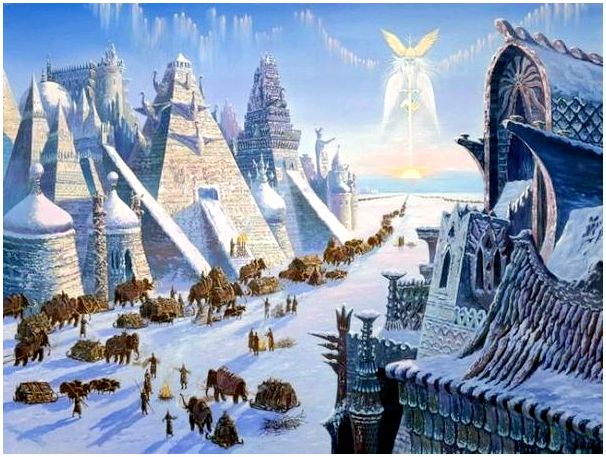 Our ancestors came from the north. In Circumpolar lived first race of giants.

This is stated in the «Book of Carols,» in Khanty-Mansiysk tradition, the Vedas.

There is a kingdom Bjarmia and mana. This is the realm of the god Brahma and his children — Mann and Mani. This is reflected also in the Vedas, surviving in India, Nepal, China, Tibet, the Himalayas, in the legends of the Mansi, Perm, as well as in Russian epics.

This is not just a coincidence. According to Vedic knowledge, is also located here Belovodie, White Island and Mount White Stone. It originates White River, which flows into the Kama.

The word «Kama» — a Sanskrit word and means fun, enjoyment. Indeed the Kama river, flowing into the Volga, makes great Russian river overflowing, bringing joy and satisfaction to all those who even simply touching Volga river!

This single stream of water was worshiped by our ancestors, and was called the Great Mother. It is also called the river Ra, which means Joy! It is written in the «Book Belesa» in Iran «Avesta», and many other secret scriptures, having a single name — the Vedas.

Here he ROOF — the Supreme Personality of Godhead, gave our ancestors The original Vedas, which then our ancestors spread throughout the world. Kryshen himself and Vishny (Vyshen, Vishnu) — are one and the other. Wife Vyšna — Golden Maya — this divine energy, the Divine Half!

All control of the material universe are subject to God. Great Architect of the Universe — Brahman (or bartender), is the father of not only humanity, but chants prayers. He is the best Vedic scholar. In essence, Brahma is the personification of the Vedas. He flies on swans and glorifies God in their hymns.

Brahma with children Mann and his wife Manya and Tarusa live on the holy mountain of Berezan. In «Avesta» This mountain is named Berezati. Berezan-Berezati because in this mountain birch grows. Not a simple birch and special. It grows roots upward and branches down. This is a symbolic tree of knowledge. The leaves of the tree — the Vedic hymns.

In the «Bhagavad Gita,» says that to know this tree is known Vedas themselves. The Vedas were preserved in Tibet, India, Nepal, and in the ancient Slavic Scriptures all this is reflected in some detail. They said that in this country Manaliu — Rights Manu (Old Slavic — Mani) — the son of Brahma.

Manu — the ancient law, which gave people the «Laws of Manu», reflected in the current laws of human civilization, as the immutable laws postulates high morality, justice, and mercy.

Brahma is the father of reasonable people (Homo sapiens), which are called «Manush», which literally means — the descendants of Manu or People.

Experts point out the names of the nations and nationalities, which contains the root «man». This Mansi, Manchus, Mongols, Manon (Khmer) and Manitou — Indians of North America. Tacitus suggests that they knew and revered Manu as ancient Germanic peoples.

Our understanding of the world around us a lot poorer, darker than that of our ancestors.

We are very accustomed to understand everything literally tried everything on the tooth. We reject much of what exists (and without which peace is impossible in principle), not only because we can not feel anything, but simply because of ignorance, that is, literally, out of ignorance of the Vedas.

Our limited bounds. Therefore, the wisdom of our ancestors imagery we take children’s innocence, in which there is no formula, strict wording imperatives. We looked at each stone individually, and do not know its place and role, as our ancestors saw the world in a holistic, interdependent and indivisible.

They are difficult questions of world order explained figuratively, is available, and it does not lose a deeper meaning.

A careful study of the Vedas and Scriptures of different nations of the earth, is not difficult to see samples of such a profound interpretation and necessarily the — General Overview, which have the knowledge.

In the «Book of Carols,» as in the traditions of ancient Egypt, said that the sun god Ra in heaven turned into the Milky Way (milk river), which divided the entire visible sky (extraterrestrial world) in two. Recall that the Milky Way — our galaxy, which is located inside our Earth and the Sun.

See how our ancestors understood the unity of the Earth and the universe, the cosmos. They stressed the correspondence between the Pa-river on Earth (White River), and Pa-river sky — the Milky Way. Pa-river separates Reality (the material world) from the right (upper world).

All sources — the «Book of Veles» Vedas, preserved in India as well as the «Avesta» — is called the Great Mother. On one side of the river Pa-in Belovodie, is Slavic Vedic paradise. It was called Iriem. Iremel mountain in the southern Urals — is Mount Erie. Here is the source of the «Vedic faith,» as it was called the ancient Slavs ..

Kryshen God led the people — the Aryans from North White Sea. In the South Urals they defeated Black idol. There is a mountain of Karabash, which means «black chump.» This indicates that there was a severed head is black idol.

Russia is the second original home of the Aryans. This is the second Belovodye, land of the Aryans, Ariana. Here were born Bohumír (in the Vedas, written in Sanskrit, the name of Yam) and his wife Glory. Bohumír occurred from many Slavic birth.

Iranian «Avesta» says that Bugomir taught people of different useful crafts and arts. From Bugomira was revealed to us the original division of the population, not only of the Slavs, and all the land to the priests (priests), warriors, artisans and traders, as well as farmers and holders of the cows.

Our ancestors never brought Almighty human or animal sacrifices, and generally no life. They argued that the life God has given to each and terminate the lives of other living beings is a grave sin. Cow in Russia has always respected and protected, as a mother, nurse, and family member.

In the Vedas, recorded in the Old Slavonic language, the capital of the Aryans called Kyle Garden.

This Royal Castle or glorious city. Today, this former town called Arkaim. Excavated in the city and obtained very valuable evidence about the life of our ancestors, is identical to the Vedic knowledge.

All peoples know the One God — it is a living, creative thinking, infinite in time and space the Divine Person. Space is one and the same time, its infinite.

In the «Book of Veles» is written:

«God — one and the many. And let no one shares of the set does not say that we have many gods. «

Everything that exists — just a few of the Most High. And He has a great variety of names. Ancient Rus and Slavs knew him as God Kryshen, sometimes shortening the name to the Most High, or even easier — to the heights. Many people still remember the old Russian carols with words and Kryshen Vyshen.

That God created his thought golden egg, from which came his son — Rod.

Son of the Most High divided the world into three parts: the upper, middle and lower. The top is in the heavens. Live there Angels and Archangels — perfect servant of God, or else they are called managers gods that rule the universe. They are serving the Lord, doing the right thing, and so-called rule of heaven inhabited.

Below is the human world, which we can see clearly. He revealed to us by God, and therefore his name — reality.

Lower world — a world of the past. There gone ancestors. This — Nav. Spirits fly from there, the images of ancestors in our dreams, and sometimes reality … Ancient Slavic immigrants from the world, appearing so called «navimi» people.

0
Like this post? Please share to your friends:
Related articles
Interesting 0
Society Former candidate for participation in the presidential election Sergey Ryzhov said that he
Interesting 0
Everything you need to know to start cranking out cash with your PC BY
Interesting 0
«… Air Force Commander Alexander Novikov reported that the two are ready to
Interesting 0
Above the summit crater of the volcano in Alaska Cleveland workers, local observatory
Interesting 0
December 1. Annual capacity is about 180,000 cubic meters of finished products used, including
Interesting 0
Disclose Truth TV introduced a new TV show with the participation of experts: Tarpeya
Categories
SQL - 50 | 0,287 сек. | 11.35 МБ