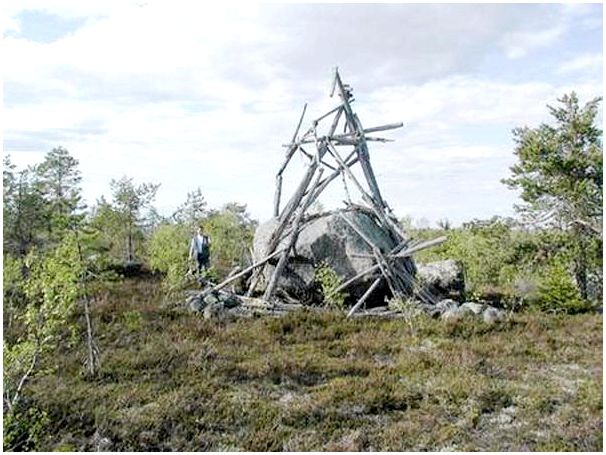 In the mythology of different nations there is a story about the World Mountain. First emerged from the ocean of chaos mountain. Then there appeared to the Creator — God of the Sun — Ra.

Phoenix then shouted the beginning of time. Time in the philosophy of the ancient cycles. In terms of World Mountain walk sun and moon over its center is the North Star, and on top is the abode of the Gods. Where is the World Mountain. No one is sure.

One thing is that the mountain is located in the North.

In this ancient authors is the legendary mountain is not the North Pole, and further south. In their view, as the magnificent mountain world crown, shining in the sun, surrounded by the northern part of the Earth.

Curly Vottovaara Mountain — one of the most mysterious places on Earth. 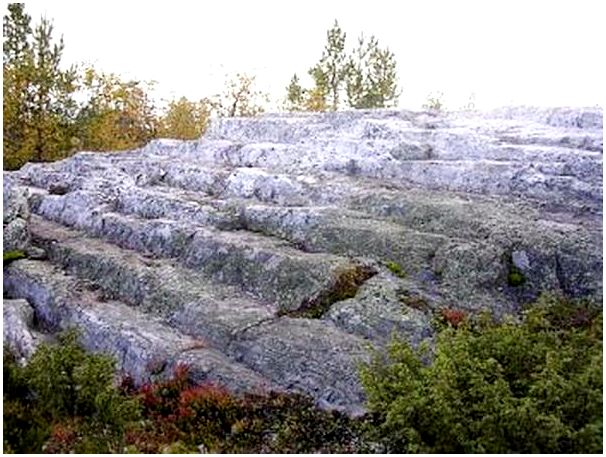 It is situated on the West Karelian hill has its main peak 417 meters above sea level.

Mount Vottovaara — a complex of ancient stone structures known as seids — hanging or flying stones. The scale of the complex is amazing — over hundreds of large and small rocks form a complex system of geometric shapes and mazes. The size of the complex is much higher than all the public in Europe and Scandinavia, places of worship.

So far, the inquisitive researcher can find in the remote corners of the Karelian taiga sites that do not fit into the system of logical representations of modern man. One of these monuments — a set on Mount Vottovaara. Mount Vottovaara Karelia superstitious people consider the place the focus of evil forces and the bridge to the other world: here grow ugly trees, almost no fauna, lakes dead. One name in the people it is worth: Death Mountain. 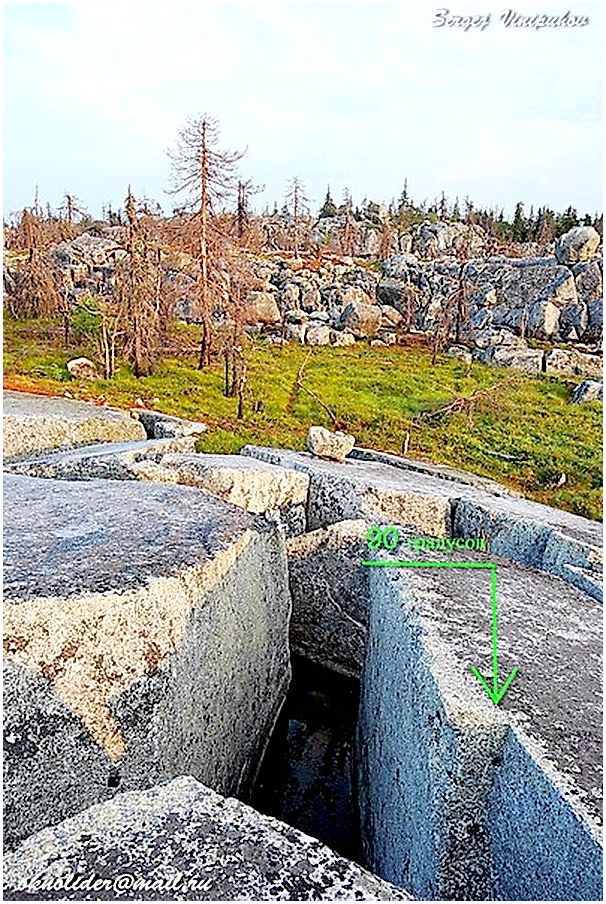 Vottovaara mountain is the highest point of the West Karelian Highlands — 417.3 m above sea level, and the nearest village thirty kilometers away, at least. About 9000 years ago in the place where there is Vottovaara, a massive earthquake occurred as a result of which formed a gigantic failure. So in the center of the mountain there was a natural amphitheater, dotted with small lakes and cliffs. Karelian scientists believe that Vottovaara — a unique geological monument. It turns out that not only the geological. In recent years, Death Mountain has become a place of pilgrimage for followers of different mystical trends, claiming that it is — a place the focus of evil forces and the bridge to the other world. Side of the mountain is a stone terraces overgrown with moss. Pine and spruce interspersed with old logging and traces of forest fires. Tops — this rocky plateau, in some places covered with trees and bizarre heights. For example, old, one hundred and two hundred year old pine trees and is not higher than two meters. And when you see the local birch, it seems as if some unknown force especially their spin.

Vottovaara on top of an area of about six square miles is about 1,600 stones laid in some mysterious manner. Scientists suggest that this is an ancient religious complex. The stones can be called Vottovaara Sejdiu. Seid — cult boulder or a fragment of rock, artificial isolation from the environment is obvious, that is, has obvious signs of human impact. The most dense concentration of stone-seids — the highest point of the ridge and on the slopes of the amphitheater. The stones are located mainly in groups of two to six pieces. Some large stones, weighing up to about three tons, put on the «legs» that is stacked on several smaller stones. Most stones lying on the banks of the ancient water and cliffs. Seydi very fit harmoniously into the mountain terrain — fabulous, rampant chaos traces of ancient earthquakes.

Who, when and why these stones are put here? Anything that would date the monument hitherto found. Geologists drilled in the center of the bottom of Lake Amphitheatre and took samples of the soil. Analysis showed a powerful layer of phosphorus formed for a limited period of time. One version of the «phosphate anomaly» — many acts of sacrifice beside Sadie, and have resulted in deposits of animal bones. Perhaps the very name — Death Mountain — is associated with many bloody sacrifices. Typically, these objects belong to Sami traditions. But, as suggested by the Karelian archaeologist Mark Shakhnovich, set on Death Mountain, apparently, is much older and is a complex of megalithic structures that were built on the European coast of the Atlantic from Spain to Norway in the bronze age. While all the other guesses are unique to the area of hypothetical assumptions. For example, there is a version that the age of the complex is about 2,000 years old, and the idea of its construction belongs to the northern tribes Hyperboreans — The ancient northern land of Hyperborea.

Many mysteries scientists tossed one of the most striking findings of the local — «Stairway to Heaven.» So nicknamed by unknown and when carved into the rock thirteen stages, ending a deep precipice. Archaeologists say with full responsibility: the local tribes in ancient times did not exist, «the idea of the stairs,» as in other tribes did not exist «idea wheel.» The issue of artificial or natural origin of steps has not yet found a definitive solution. Trying to understand the concept of the ancient architects, scientists set up a plan for the area. However, the paper is not clear loomed figurative composition, for example circular, spiral or square. A different age rocks indicates that the complex may have formed quite a while. Rather on Vottovaara we deal with grandiose, unparalleled in the world of the cult complex, where over the centuries went sacrificial rites.

According to Mark Shakhnovich, researchers highlighted the Saami two lines beliefs — cult seids as patrons crafts (seids zoomorphic form) and ancestor worship (seids anthropomorphic form). Interestingly, the worship of Seydou Sami took place almost 10 years of XX century. This could mean that the formation of the complex could go up to that time. No less entertaining and another question. Why Vottovaara was chosen by ancient people as the place most suitable for the ritual of the sacraments? It turns out that while scientists for several years carried on his research Vottovaara, hearing about the mysterious mountain quickly spread among the fans of the ordinary. Amateur expedition pulled a string here. And here today perhaps the most frequent visitors — psychics. Once a year on the mountain traditionally gather most authoritative sorcerers and magicians from all over Russia. What causes them here? Participants similar charges say anywhere else in Russia, they do not experience such close contact with the cosmos. According to psychics, energy of this place is extremely high, it feeds their inner strength, like a powerful battery. They call Vottovaara «acupuncture» point through which the planet, like the antenna, provides energy information exchange with the cosmos. Check out this very difficult, and it remains to believe professionals magic word. But it is possible that the ancient inhabitants of these places can be aware of the unusual properties of the mountain Vottovaara, and because in the time they had to decide where you want the «country of sacrificial idols», they did not have to think long. Unfortunately, serious physical Vottovaara studies have not been performed. Who knows, perhaps the measurement of background radiation and electromagnetic radiation could help to understand the nature of this phenomenon and explain what is happening here is very strange phenomenon. Listening to the stories of people who visited here, just amazed. Many point to the mountains of the anomalous effect mechanisms and electronics, and even the human body. The reports of several expeditions can find many descriptions of how to coexist stop watch immediately from several members of the expedition, in digital cameras suddenly overcrowded «fresh» flash cards, some researchers began nosebleeds, people could not go to the clock clearly visible purpose.

0
Like this post? Please share to your friends:
Related articles
Interesting 0
Society Former candidate for participation in the presidential election Sergey Ryzhov said that he
Interesting 0
Everything you need to know to start cranking out cash with your PC BY
Interesting 0
«… Air Force Commander Alexander Novikov reported that the two are ready to
Interesting 0
Above the summit crater of the volcano in Alaska Cleveland workers, local observatory
Interesting 0
December 1. Annual capacity is about 180,000 cubic meters of finished products used, including
Interesting 0
Disclose Truth TV introduced a new TV show with the participation of experts: Tarpeya
Categories
SQL - 49 | 0,329 сек. | 11.51 МБ