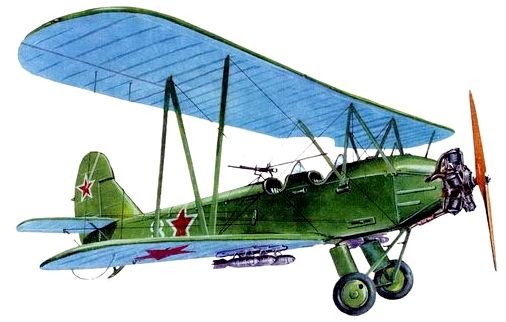 Everyone understands that the aircraft Polikarpov U-2 played a huge role in the history of Russian, yes, perhaps, and the world of aviation. On this machine, trained 10 flight training of thousands of pilots. In the production of a cheap and undemanding to use the U-2 long years were mass manufactured.

In one of the flight school instructor explained to the cadets as the main design features of the machine:

«The plane U-2 is composed of rods and holes. Sticks to gain holes — to facilitate. «

For all the anecdotal explanation is contained a grain of truth. Aerobatic properties of the U-2 were also unique. He hardly went into a spin and out of it with the least delay. It is said that at one point, VP Chkalov at the ground turned the U-2 from the slope of nearly 90 degrees, so that between proparhat with 2 birch trees, the distance between which was smaller wingspan.

In numerous publications pretty thoroughly describes the construction and history of the introduction of this amazing machine. Yet the story of creation in almost all aircraft are not known to readers. And even in a serious book VB Shavrova written enough about it is not enough. Let’s try to lift Zahav time and tell us about how to create a U-2.

Since 1919, our main training aircraft was the U-1, made on the basis of the British spy Avro 504, the first flight took place in 1913. Not the case because in 1922 there was a question about the need to develop a more modern training machines, even more so, that by the time a training flight training endured significant changes. It was found necessary to perform solo flight training on the aircraft of elementary education and training to hone skills (transient) machines. 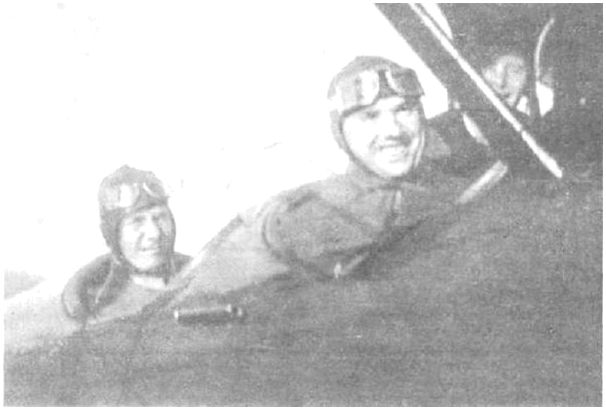 NN Polikarpov in the cockpit of the U-2

Nikolai Polikarpov specifically engaged in the development of training aircraft in 1923, one of his first works in this direction was the design of a double «small training aircraft with engine ABC» capacity of 18 liters. s. Machine is a cantilever monoplane unblemished form with the highest flight speed to 107 km / h But the small capacity of the motor is not allowed to conduct training aerobatics. The project was not implemented.

In October 1924, the STC Air Force general was tactical and technical requirements for the aircraft to the initial training and transition. Emphasized the desire to have as such a small biplane landing speed.

Under these requirements Polikarpov in 1925, was designed by 2V-BZ — «second training with the engine of BMW-3» Liquid cooling capacity of 185 liters. s. For the possibility of installing the motor BMW-IV in 240 l. s, whereas plane could be seen as a transition. Note that in the book VB Shavrova «History of aircraft construction in the USSR until 1938,» the creator of the machine incorrectly named Moses, while the head of the design poluotdela in KB Polikarpov. 2U-BZ features a good aerodynamic shape, obmyslennoy design. Its construction was completed in February 1926, and from March to start the test.

But to show new requirements for initial training machines forced to treat as a transitional aircraft, in connection with which it was renamed the S-1. Tests confirmed the excellent performance properties of P-1 (2U-BZ) in the statement of flight tests, namely, it was noted that «the sluggish performance of the corkscrew, resembles a steep spiral.» Was ordered series of these machines, but construction did not come true because of another configuration requirements for transient aircraft: as directed by the PI Baranov, the then chief of the UWS NGOs in the transition plane must be established arms, so that he could use at once and as training and combat vehicles, and light structure-spy. So there was an armed version of the F-1 engine with BMW-IV, and then the M-2 M-6 engine.

By mid-1925 it was decided to build the plane of initial training with the engine capacity of 100 liters. s. It was assumed that such engine recently manage to make Russian design teams. September 27, 1925 letter notified Aviatrest Polikarpov that

«… The initial training aircraft will begin designed for special disposal in connection with the construction of a new engine.»

But even before the letter Polikarpov performed some preliminary conceptual design of the airplane type.

By mid-1926 design team, headed by AD Shvetsov (plant number 4) and NR Briling (AND WE), managed to build engines M-11 and M -12 and begin their tests. Initially, the balance is tilting in the direction of M-12, and therefore the July 3, 1926 Aviatrest officially gave the order to proceed to the design of educational U-2 aircraft under this engine. Specifications for the machine were formulated NTC Air Force and countersigned by the NE section of the airplane. Ilyushin 15 July 1926 in their development took an active role as a member of the Air Force and the NTC itself NN Polikarpov. The requirements, namely, stipulated that the maximum flight speed should not exceed 120 km / h, and the landing — 60 km / h, plane should only be biplane circuit and constructed from materials available in the USSR.

Polikarpov in the development of the project tried to seat the student and the instructor positioned closer to the center of mass (unlike the plane 2U-BR). Increased attention was paid to ease of piloting the aircraft. To reduce the cost of operation and production of the upper and lower wings were similar in design, ensuring interchangeability. The forms of the wing and tail were made in terms of rectangular («chopped») to facilitate the production, which featured the first copy from all of the following experienced and factory options U-2. This is obviously exacerbated the aerodynamics, but because of the low (even at the time) requirements to those applicable maximum speed.

«On the plane introduced for the first time operationally significant improvements, such as: mobile foot control, sliding seat, turn off the foot and hand controls, interchangeable ailerons, elevators and so forth.»

Cylinder engine exhausts have been consolidated into a ring-shaped collector. Carburetor air intake was located below the hood. Cable control was mostly internal wiring, which also featured this option from the following.

October 6, 1926 preliminary draft was considered at a meeting of the Technical Council Aviatresta. The resolution noted that the

(In those days KB Polikarpov was as a division of land aircraft Aviatresta CDB). But it was ordered to move out of the fuselage fuel tanks on the upper wing and «put them out of center.» Polikarpov mind this Fri, believing that such an arrangement will aggravate the aerodynamics of the wing fuel tanks, but could not do anything.

Model of the U-2 built by February 5, 1927, and immediately began to build, and the first copy machine. But full clarity with the motor still not there. M-12, which made management Aviatresta basic rate, broke down on the shield. Earlier in the judgment of 2fevralya 1927 Technical Board Aviatresta raised his proposal for elaboration ability to be installed on the U-2 engines foreign «Lucifer» with a capacity of 100 liters. s. and «Salmson» in 120 liters. s, a copy of which was in the USSR in different institutions.

By the end of March, it became clear that we had in our Serpukhov Aviation School «Lucifer» was installed on the snowmobile and defeated at the run. «Salmson» in the U.S. was also at a snowmobile, he worked more than 150 hours and was thoroughly worn out. Because at the end of April 1927 gave an indication Aviatrest set on the first prototype of the design of the M-11 AD Shvetsov, who at that time still passed bench tests, but it was municipal. June 23, 1927 plane was placed on the airfield.

Tests began with the June 24, 1927 Very soon it became clear that the M-11 in flight overheated oil, failures often occur. In short, the fully manifested «childhood diseases» motor. Almost conducted flight tests and operational development of not only the aircraft, as the motor. Aviatrest gave urgent instructions to install the U-2 engine M-12, M-12, but to bring to an appropriate degree of reliability and could not. Joint efforts KB Polikarpov and Shvetsov many shortcomings M-11 vsezheudalosustranit. September 15, 1927 plane passed state tests at the Research Institute of the Air Force. They showed that machine has good performance properties, including snap and generally meets AF except climb. The second copy of NN Polikarpov significantly improved aerodynamics, putting the elliptical wing tips and tail. Thick airfoil «Prandtl-P65″ was replaced by another, more narrow profile «№ 2», developed by the aerodynamics of the KB Polikarpov, as TSAGI suitable profile was not found. To improve the flight characteristics postaviliuvelichenny rudder. Somewhat eased the car to a reasonable level. Some data they say that the second instance, absolutely Polikarpov eyes reflecting on a similar plane, designed at once to the first, but it for various reasons, have decided not to transfer the establishment to the end of the test the first instance. In general, the projects were very similar: the same step ribs, frames, monotonous design of the main parts.

The preliminary draft of the second instance was approved February 28, 1928, after the start of the test. 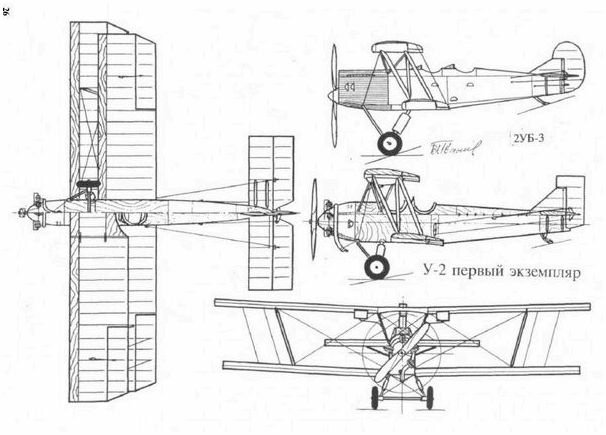 Tests are conducted pilot Gromov January 1928, showed excellent flight properties of the U-2.

«… All the pieces except the spin plane is doing fine, that still regards the corkscrew, the input of the aircraft in such a tight, well out of the corkscrew is very easy»

— Noted in a brief report about the first step of flight tests.

Already 29 March 1928 NTC Air Force decided to build a pilot series of U-2 of 6 copies of the factory number 25 for the trial operation of the flight schools. Batch creation unfolded in the Leningrad aircraft factory number 23. By 29 October 1929 the plant has built 25 U-2, of which the customer has handed over 19 vehicles. In the upcoming creation developed very rapidly. For example, only in 1933 the 23rd factory produced 1,508 cars. Production aircraft differed from the second instance, in the main, a modified hood.

The U-2 had a long life and a resounding fame.

0
Like this post? Please share to your friends:
Related articles
Interesting 0
Society Former candidate for participation in the presidential election Sergey Ryzhov said that he
Interesting 0
Everything you need to know to start cranking out cash with your PC BY
Interesting 0
«… Air Force Commander Alexander Novikov reported that the two are ready to
Interesting 0
Above the summit crater of the volcano in Alaska Cleveland workers, local observatory
Interesting 0
December 1. Annual capacity is about 180,000 cubic meters of finished products used, including
Interesting 0
Disclose Truth TV introduced a new TV show with the participation of experts: Tarpeya
Categories
SQL - 47 | 0,309 сек. | 10.88 МБ