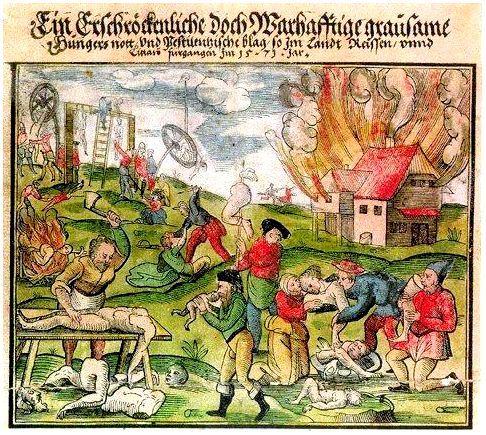 (Cannibals in Lithuania and Muscovy, engraving 1571)

Most of the current ethical standards of European civilization — only about 200 years old. Things that are taboo today imposed a state of emergency, such as cannibalism, in the XVIII century were common. The priests were drinking children’s blood, fat executed treated epilepsy, and the production of mummies, which were eaten as a medicine, was put on stream.

On this part of the history of Europe to remember as obscurants and liberals. The first claim that their actions — whether the laws on blasphemy and religious education — a return to tradition, spirituality and holiness. The latter, liberals must realize how easy it is to fall into degradation, advocating for pedophilia or consumption of hard drugs. All, as called for, and what are making both camps, Europe for 2500 years of its existence has already passed (and sometimes several times in a circle) — the female priesthood, pedophilia, slavery, anarchist and communist communities, etc. We only need to look into the past to extrapolate the experience is to understand how this thing will work now.

As the European experience shows that there is no immutable ethical standards. What yesterday was considered pathology, is now becoming the norm. And vice versa, and so a few times in a circle. Take one of the greatest taboos of our civilization — cannibalism. He unequivocally condemned by all sections of society — religious, political, legal, social, etc. In the twentieth century is not enough to justify cannibalism and acts of God, such as hunger (as it was during the famine in the Volga region and in the siege of Leningrad) — the society is not an excuse. 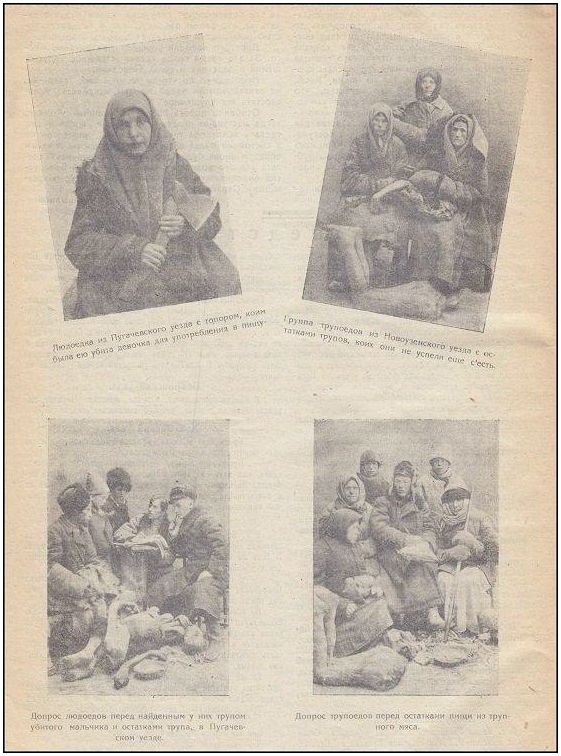 But a few hundred years ago — when there were open universities and lived the greatest humanists — cannibalism was common.

Human flesh is considered one of the best medicines. In it went all — from head to toe.

For example, the English King Charles II regularly drank infusions of human skulls. Especially healing for some reason considered a skull from Ireland, and the king brought them out.

In the place of public execution is always crowded epileptics. It was believed that the blood bryznuvshaya with decapitation to cure them of their disease.

With the dead by the end of the XVIII century were allowed to take the fat — it was rubbed in various skin diseases. 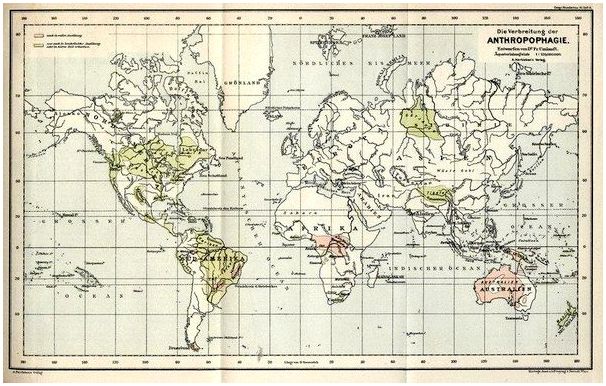 (German map of the territories, inhabited by tribes of cannibals, the end of XIX century)

But the most ambitious was the consumption of the flesh of mummies. In this market in the late Middle Ages worked entire corporation.

A «medieval product» has reached our days, which still continues to be valued almost as gold — it mummy. Wholesale price of 1 oz. this substance is 250-300 rubles. ($ 12.10 or $ 10.000-12.000 per 1 kg). Millions of people around the world continue to firmly believe in the miraculous power of the mummy, even knowing that eat corpses.

As medicine, mummy was used from about the tenth century. Shilajit is a thick black composition, which the Egyptians from the beginning of III millennium BC. e. embalmed body of the deceased. As the demand for this facility was very large, hardened ground in recent times have become clean off residue with skulls and bones, scraping of the body cavities and recycle.

This fishery monstrous mummy began looting of Egyptian tombs. But it was worth — according to a report doctor Abd al-Latif, dating from around 1200, mummy, obtained from three human skulls, sold for 50 dirhams (dirham — silver coin weighing 1.5 grams).

Demand has a tremendous revival of trade in the «very healing potion.» Enterprising merchants of Cairo and Alexandria made sure that the mummy became an important export to Europe. They hired crowds of Egyptian peasants to dig cemeteries. Corporation hucksters exported milled human bones all over the world. In XIV-XV centuries. mummy made with conventional means, sold in pharmacies and herbal shops. When raw materials became scarce again, began to use the bodies of executed criminals, the bodies of the dead in the poorhouse or killed Christians, drying them in the sun. So were made «real mummy.» 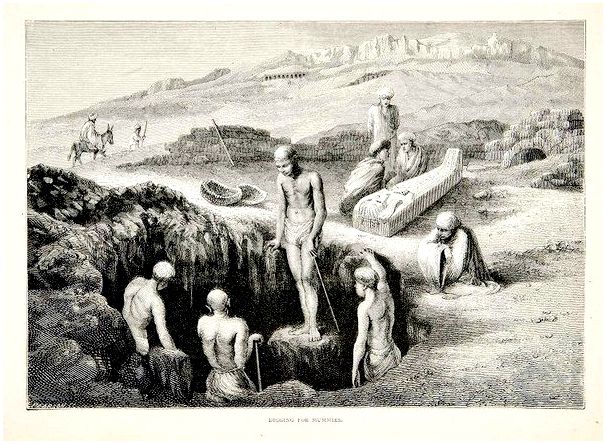 Cannibalism as part of the European tradition

But since this method does not cover the supply of the market demand, manufacturing methods mummy took other forms. The robbers stole from the grave just buried the body dismembered and boiled them in pots as long as the muscles are not separated from the bones, oily liquid dripping from the boiler and poured into bottles, sold for a fortune of Italian merchants. For example, in 1564 a French physician Guy de la Fontaine of Navarre in stock one of the merchants in Alexandria discovered piles of bodies of several hundred slaves, which were intended for processing into mummies.

Soon the trade of processed carcasses were connected and Europeans.

In particular, John Sanderson, Alexandria agent Turkish trading company in 1585, was ordered to join the Board of trade mummy. Approximately 600 pounds of dried and mummified dead bodies he sent by sea to England.

However, a more cost-effective to get the mummy was on the spot in Europe.

Already in the XIV century for making mummy recently started using corpses of the dead and executed criminals. Happened that butchers selling directly from the scaffold, and new blood «human fat.» About how it was done, it is told in the book of A. Kroll, published in 1609 in Germany: 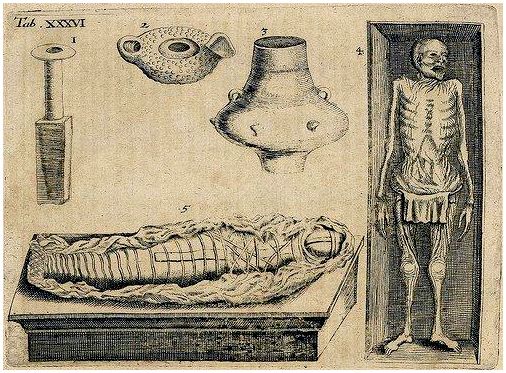 «Take a clean intact corpse redheaded men 24 years of age, who was executed no earlier than one day before, preferably by hanging, breaking on the wheel, or put on a stake … Hold it one day and one night in the sun and the moon, then cut into large pieces and sprinkle with powdered myrrh and aloe, so it is not too bitter … «

There was another way:

«Flesh to hold a few days in wine alcohol, then hung to dry in the shade and the breeze. After that, you again need to restore the spirit of wine with red flesh color. Since the appearance of the body is urging neotvratno nausea, well to soak this month mummy in olive oil. Oil absorbs minerals mummies, and it too can be used as a medicine, especially as an antidote to snake bites. «

Another recipe offered the famous chemist Nicolas Lefebvre, in his «Complete Book of Chemistry», published in London in 1664. First of all, he said, to cut the muscles of the body healthy and young men, soak them in wine alcohol, and then hang it in a cool, dry place. If the air is very humid or rain, then «these muscles should be hanged in the pipe, and every day to dry them on a gentle fire of juniper, with needles and knobs, to the state of corned beef, which sailors take a long voyage.»

Gradually the technology of drugs from human bodies has become more sophisticated. The doctors declared that his healing power increase if you use a donated human cadaver.

For example, in the Arabian Peninsula men aged 70 to 80 years gave their body to save others. They do not eat, just drink honey and take baths in it. A month later, they began to exude this honey in the form of urine and faeces. After the «sweet old» died, their bodies were placed in a stone sarcophagus filled with the same honey. 100 years later, the remains were taken out. So get medicated — «confection», which, they believed, could instantly heal people from all diseases. 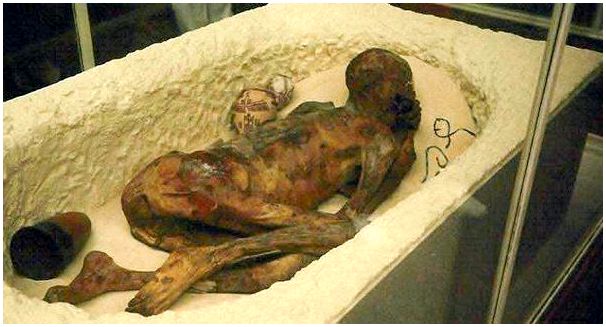 In Persia, in order to make this product, you need a young man of 30 years. As compensation for his death while well-fed and otherwise blessed. He lived like a prince, and then it was heated in a mixture of honey and herbal cannabis, the body in the coffin was sealed and opened only after 150 years.

Such passion eating mummies first led to the fact that in Egypt by about 1600 it was 95% looted tombs, and in Europe by the end of XVII century cemetery of guard armed groups.

Only in the middle of the XVIII century in Europe, one country after another began to pass laws or significantly restrict the eating of the flesh of corpses, or completely banned from making it. Finally mass cannibalism stopped only on the continent by the end of the first third of the XIX century, although in some distant corner of Europe it was practiced by the end of this century — in Ireland and Sicily was not forbidden to eat a dead baby before baptism. 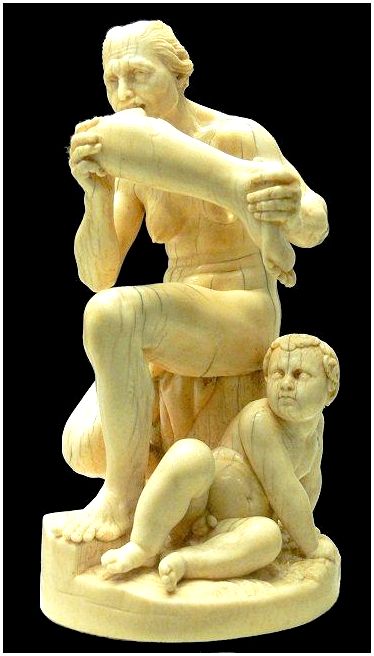 But in the twentieth century remained the echoes of the practice — making drugs using human flesh. For example:

«External application for burns preparation obtained from the bodies of people — kadaverolyu (kada — means a corpse) is dedicated A.M.Hudaza thesis, made in 1951 at the Azerbaijan Medical University. The drug is prepared from the internal fat vytaplivaya it in a water bath. Using it for burns allowed, according to the author, shorten treatment almost doubled. First human fat called «gumanol» for therapeutic purposes has been used in surgical practice physician Godlenderom in 1909 in the Soviet Union it is also used L.D.Kortavov in 1938 «

«The substance obtained after prolonged boiling of dead bodies, it can be curative. Of course, it is only a hypothesis. But in one of the scientific workshops experts from the research laboratory N. Makarov showed the artificial production of mummies (scientists call this substance MEF — mineraloorganichesky substrate). Study protocols testified: IAS is able to increase efficiency of the people, reduce the period of rehabilitation after radiation damage, to increase male potency. «

The German practice of recycling in World War II concentration camp prisoners in the soap, leather, fertilizer, etc., so there was some innovation in Europe — for 150-200 years before the Nazis all this was still the norm (this practice is also confirms that German Nazism was a sharp setback in antiquity). 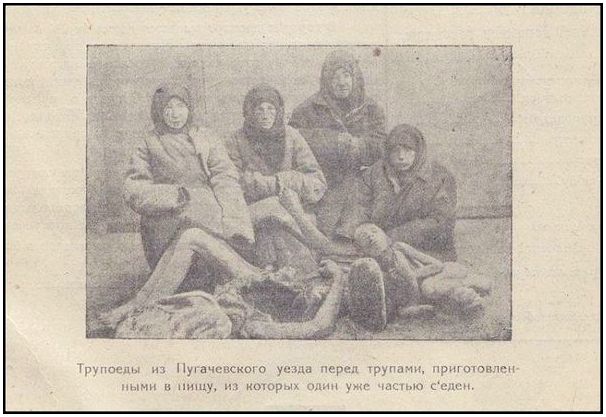 But today, in the XXI century, Western civilization is still legally consume human flesh — is the placenta. And the fashion for eating the placenta is growing year by year, and in many western hospitals even have a procedure for its use — or give new mothers, or deposit in the laboratory, it is based on producing hormones. More information can be found here. Is it possible to recognize the fashion of eating human placenta one sign of a rollback of Western civilization in antiquity? Most likely, yes.

What else to read about the Middle Ages in the Blog Interpreter:

The standard of living in the European Middle Ages, was comparable to the early twentieth-century Russian

In 1913 in Russia per capita GDP in 1605 was U.S. $ «sample» of 1993. This is less than in Italy in 1300. Teamwork English economists and historians of economic structure of England and Europe in 1270 till 1870 at all shows that the growth rate of GDP per capita in the Middle Ages and in the early days of capitalism were very mixed.

Lenin used in practice from 130 to 150 aliases. But as you know, he stopped to «Lenin». Historians are still wondering what it was due to such a choice. One version — Ilich is named after the German monastery Lenin, known to Europeans believing his «Lenin’s prophecy.» 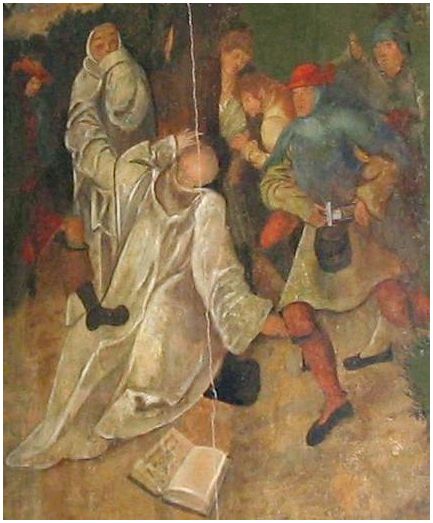 0
Like this post? Please share to your friends:
Related articles
Interesting 0
Society Former candidate for participation in the presidential election Sergey Ryzhov said that he
Interesting 0
Everything you need to know to start cranking out cash with your PC BY
Interesting 0
«… Air Force Commander Alexander Novikov reported that the two are ready to
Interesting 0
Above the summit crater of the volcano in Alaska Cleveland workers, local observatory
Interesting 0
December 1. Annual capacity is about 180,000 cubic meters of finished products used, including
Interesting 0
Disclose Truth TV introduced a new TV show with the participation of experts: Tarpeya
Categories
SQL - 50 | 0,684 сек. | 10.89 МБ