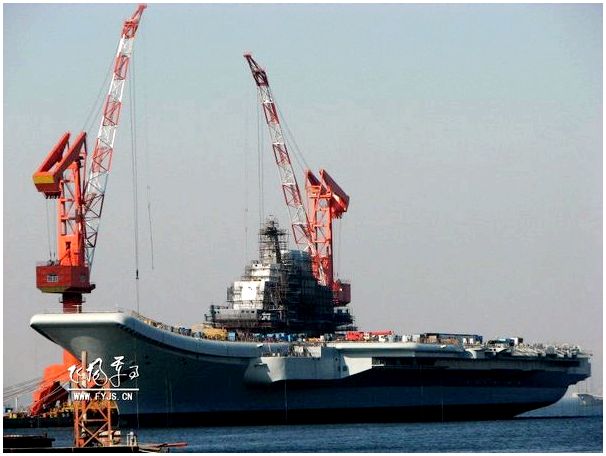 On the resource militaryphotos.net were hung pictures of the aircraft carrier «Shi Lan»(Last Russian» Varyag «), where you can behold the full-size mock helicopter Z-8 AEW and fighter J-15. Layouts aboard analysts linked with a possible start of the tests, for example, for moving aircraft on the deck.

The Chinese bought the unfinished aircraft carrier «Varyag» (project 1143.6) in Ukraine in 1998 — can be said for a knockdown price. The Chinese side said first ship in the Conversion … floating casino, but nevertheless admitted later in his own plans for the completion of the «Varyag» for military needs.

In the summer of last year, «Varyag» was fitted and then began sea trials. In December 2011, it passed the tests of the sea.

As previously reported, the complete set for the end of this aircraft carrier, has received the name «Shi Lan»China asked the Russian Federation 4 sets arresting gear. Chinese equipment required to deliver our homeland refused: because it has a strategic status. As presented experts, Russia feared that China will copy the technology, so look to use in developing their own aircraft carriers. In general, in December of the same year, China officially denied any plans to purchase Russian arresting gear.

The Western media report that «Shi Lan»Will be adopted for the Navy of China in the current year.

0
Like this post? Please share to your friends:
Related articles
Interesting 0
Society Former candidate for participation in the presidential election Sergey Ryzhov said that he
Interesting 0
Everything you need to know to start cranking out cash with your PC BY
Interesting 0
«… Air Force Commander Alexander Novikov reported that the two are ready to
Interesting 0
Above the summit crater of the volcano in Alaska Cleveland workers, local observatory
Interesting 0
December 1. Annual capacity is about 180,000 cubic meters of finished products used, including
Interesting 0
Disclose Truth TV introduced a new TV show with the participation of experts: Tarpeya
Categories
SQL - 49 | 0,166 сек. | 11.41 МБ