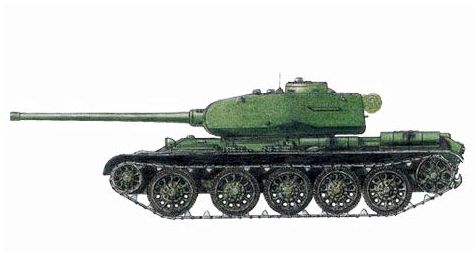 T-44 has not been released in large quantities, as BT or T-34, did not pass through the war. Do not become the main tank for the army. But still is a worthy representative of the Russian tank development.

Its creation began in late 1943, in the Design Bureau of the Ural tank factory, under the direction of A. Morozov.

T-34M began to develop in 1940, along with the T-34. He planned to establish a strong 60 mm frontal armor, 600-horsepower engine, 8-high-speed box. The chassis with 6 support with 3 support rollers. The engine is positioned across the frame desired by expanding it to 90 degrees, would be able to reduce the length of the machine and increment 76 mm cannon ammunition and 100 rounds (T-34 — 77). This tank promised to eclipse T-34 in all respects (reservations, firepower, mobility). But in the end, the military command did not support the innovations of designers apparently did not want to disperse its forces, concentrating on the T-34, and the project folded. Designers tasked another task — design a T-43. 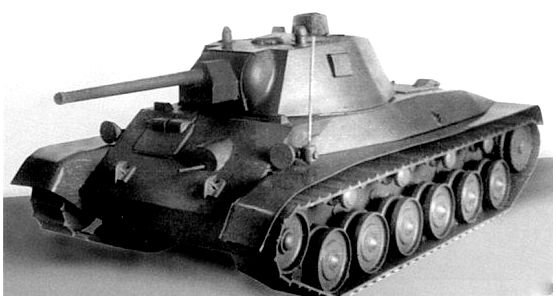 The T-34 has been upgraded a couple of times in the course of the war and came to own ceiling. Red Army needed a brand new car class medium tank. Design T-34 was completed by June 1943. The main requirement was to him — maximum protection with minimum growth of the mass of the tank.

Housing had a 75 mm radial reservation, the frontal part of the tower — 90 mm (for comparison, the T-34 — 45 mm). But the length of the engine compartment to reduce failed because the fighting compartment came out less. To provide more space crew, the designers for the first time on an average tank set torsion bar suspension, a little more than a candle, with the vertical spring, as the T-34.

T-43 has eclipsed armor protection on the T-34, approached firepower to HF, but very increment ground pressure that badly affected the mobility of supplies and travel. Well, its design came limit. Eliminating the ability of big upgrade. So when the T-34 equipped with 85 mm cannon, the need for the T-43 has disappeared.

But the experience of its creation was not lost, for example, his trial run of 3 thousand km, demonstrated proper installation torsion bar suspension. It has become clear that we need a fundamentally new girl machine — dubbed her T-44. 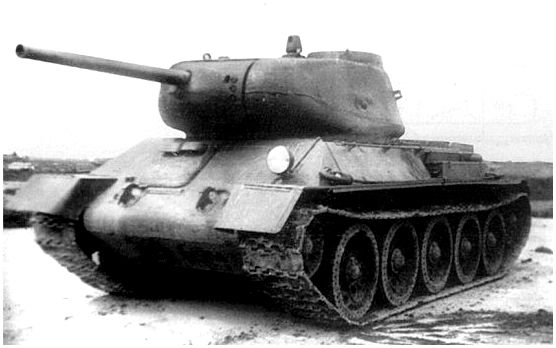 It also used a cross-engine, and a number of new technical innovations, ultimately design a T-44 for several decades has led to the development of tanks in the USSR.

MTO height has been reduced by moving air cleaner new type of collapse of the cylinder V-type engine to the board. The diesel engine B-44 equipped with an advanced fuel system that allowed to increase power from 500 to 520 liters. s. at the same cylinder capacity that on the B-34. In place of the fan who played for the size pan, put small-sized flywheel. This allowed diesel at low, stiff and light motor mount. So Makar, the height of the body was reduced to 300 mm. Fan slipped in to the feed list, it has improved the cooling units box.

Oily water and radiators placed horizontally (on the T-34 stood upright), under the cover of the transmission department, in a uniform air flow, because the cooling system has become more efficient.

The engine was connected to the latest 5-speed transmission that increases gear with a ratio of 0.7. Friction and transfer took with the T-34.

Brand new scheme MTO is allowed to move the tower with the 85 mm gun (as well as the upgraded T-34) in the center of the housing, where the crew was subjected to less angular oscillations, and gun is not compromised stuck in the ground. When driving on rough terrain. And increased accuracy.

Frontal armor of the body was brought to 120 mm, the driver’s hatch was moved to the roof of the body, removed the installation of a ball machine gun course. And on the empty place set the fuel tank.

T-44 has successfully passed all tests and was adopted by the Red Army.

At the end of the 40s was developed brand new tower with 100 mm gun D-10T, or LB-1 («Beria», because he was the deputy chairman of the T-bills and was in charge of arms). On the roof of the turret hatch loader installed with anti-aircraft machine gun DShK, sides and undercarriage were covered by 6 mm cumulative screens. This upgrade has been called T-44-100.

With the emergence of the T-54, T-44 was withdrawn from service in 1961 motor assemblies, power train, chassis parts were unified with those that have been installed on the T-54. Were installed night vision devices. In 1966 he established stabilizer arms in 2-dimensions. He remained in service with the Russian army before the end of the 70s.

In the fighting did not participate, except part in operations to the oppression of the rebellion in Hungary in 1956. He took part in the filming of the epic Ozerov «Liberation» — as the German «Tiger»

On the basis of the T-44 produced artillery, tank trucks, engineering machines. Total was created in 1823 this type of tank, tank released until 1947.

Performance characteristics of the T-44 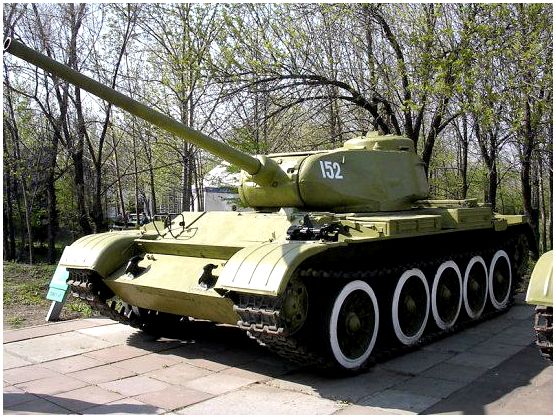 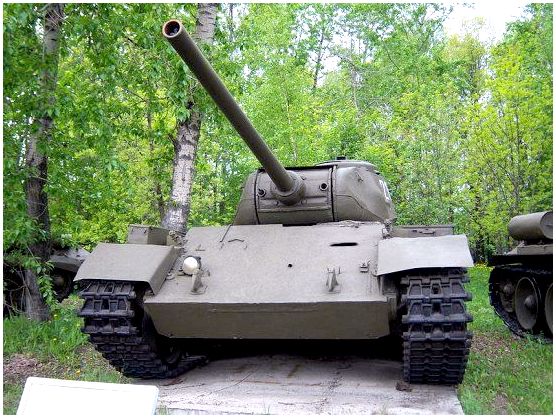 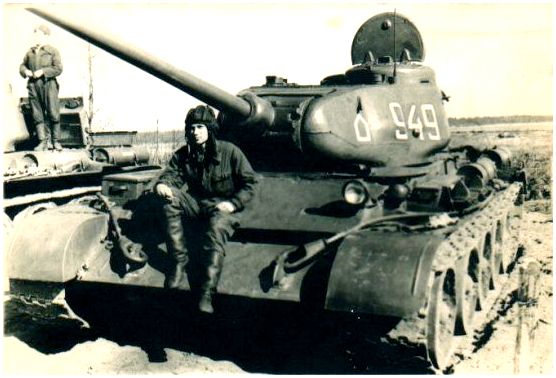 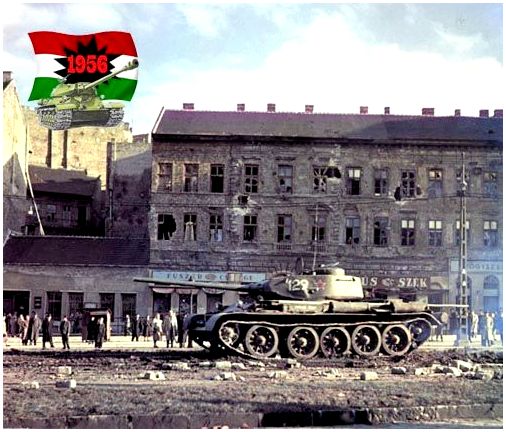 0
Like this post? Please share to your friends:
Related articles
Interesting 0
Society Former candidate for participation in the presidential election Sergey Ryzhov said that he
Interesting 0
Everything you need to know to start cranking out cash with your PC BY
Interesting 0
«… Air Force Commander Alexander Novikov reported that the two are ready to
Interesting 0
Above the summit crater of the volcano in Alaska Cleveland workers, local observatory
Interesting 0
December 1. Annual capacity is about 180,000 cubic meters of finished products used, including
Interesting 0
Disclose Truth TV introduced a new TV show with the participation of experts: Tarpeya
Categories
https://www.mikicz.info/alkotox/ cpa daily Alkotox.
SQL - 47 | 0,868 сек. | 10.88 МБ