Subject deck plane 5th generation was rising a couple of times. In the late 1980s in the United States intensively promoted program from the first «carrier-based stealth» A-12. Strike aircraft intended to substitute the A-6, which has been quite honorable age. But because the brain scourge of all U.S. programs — a significant excess cash limits, «Avenger II» was buried before the first flight of the demonstrator. Another dream of Admirals — NATF — realized the same fate. In turn NATF was intended to substitute F-14 «Tomket.» So Makar, 1992 fleet met with no hope of getting any lately «stealth». The profound modernization of fighter-attack aircraft F/A-18C/D — F/A-18E/F was in this situation, a small consolation prize. Easy veil stealth aircraft performance properties actually exacerbated and increased take-off weight was compensated by over-thrust engines, which significantly expanded the capacity of a fighter. 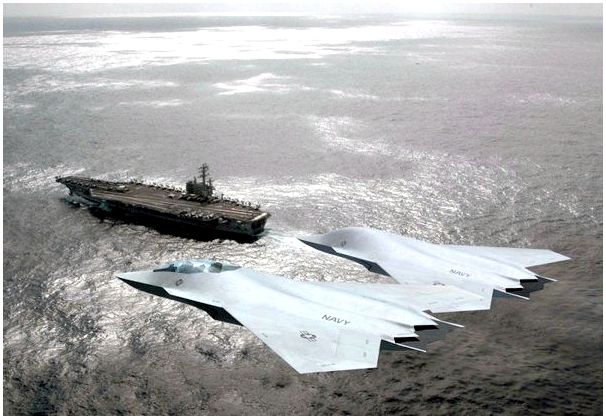 Because of the Air Force lacked enthusiasm for the «big car», at this time they were fighting for the F-22 and were able to save it, though with significant losses (instead of 750 was obtained 187), fleet financing kick failed. In the Air Force AX (experimental drummer, who, after closing NATF renamed FX — fighter pilot) was considered as a valid substitute for the F-111, F-117 and F-15E. Despite this, in 1993, in the early stages, the Air Force and Navy agreed on the requirements for aircraft performance features, although the ability of the Navy of the future operations of the machine in the «air-to-air» were even more significant than Air Force, which in this area dominated by the «Raptor». Completely covered the topic in 1993. At this time of the activated by the «one strike fighter.»

In the summer of 2008, after a fairly long break in San Diego at an air show in the demonstration of the future strategy of the U.S. Navy, were shown four other concepts programmke F / A-XX. They all were a subtle subsonic aircraft with a range of actions 3.3 — 5.6 thousand km. With all of this was planned that the unmanned air will hold up to 50 hours. 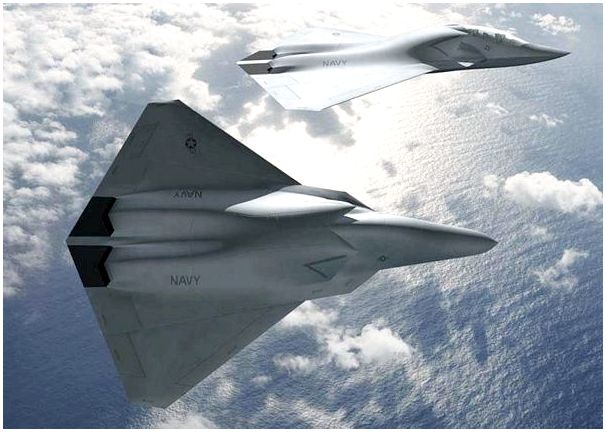 In the summer of 2009, a division of Boeing Phantom Works has been shown to reflect the new F / A-XX. Introduced machine refers to the 6th generation of supersonic fighter aircraft and is designed to change the F/A-18E/F after about 10-15 years of age (as it is clear F/A-18C/D will be replaced by F-35). In a brand new multirole fighter will be implemented some new technologies such as variable-cycle engines, the increased fraction of composites in construction, visual stealth, advanced electronics, etc. The external appearance of the aircraft is very different from the concept presented at the «Aviation Week and gallakticheskoy technology» year reversed. There has been a return to more traditional forms and away from a «flying wing». A pronounced influx of wing and ventral vozduhopoglotiteli assume supreme maneuverability aircraft. With all of this rejection of the vertical and horizontal tail and narrow, screened from the bottom nozzle must bring effective dissipation area to the level of the F-117 — not more than 0.2 m2. Normal take-off weight — 18 thousand kg.

At Expo 2010 in May 2010, was shown a model of the aircraft on a scale of 1:16. During this time, any apparent configurations she endured. The model has three compartments of the combat load two of which are designed to launch air-to-air, one for the placement of an instrument of «air-to-ground.»

Along with that shown on the poster project more large aircraft, as reported in the incoming class is not lower than the F-22 (conventional take-off weight 27 thousand kg). Against the background of the premature termination of production «Raptor» and the problems with the F-35 fighter jet seems to create a fantasy, but a company representative said Boeing intrigued by the Air Force and the Navy United States in this project. After the Navy will begin full-scale substitution of F/A-18C/D, and the Air Force A-10 and F-16 for the F-35, there will be a need for future substitution F-22 and F/A-18E/F after 2025 g 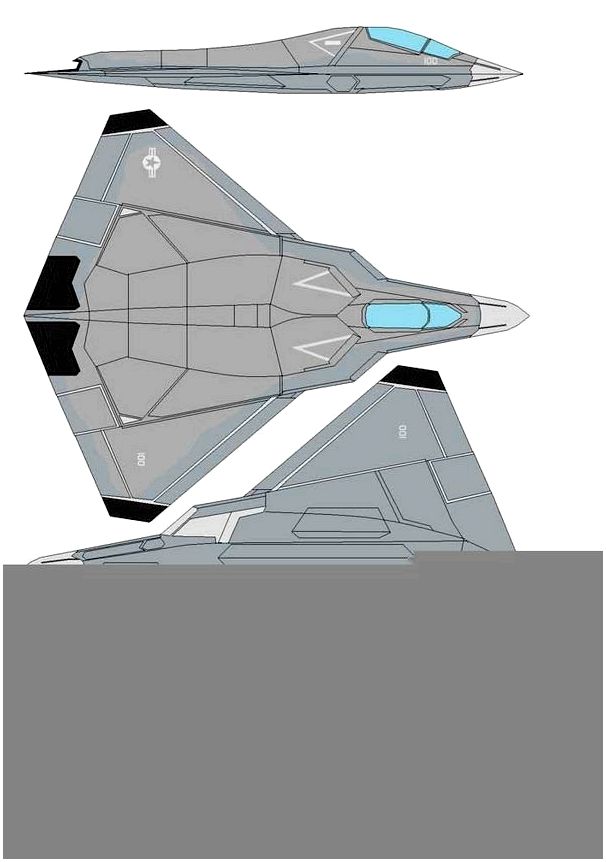 Analysis of the picture allows us to estimate the highest take-off weight, «the heavy version of the» machine of 40 — 42 tons for deck version of the machine it looks a bit weird, because the F-111B once got burned on the bar at 34 tons but, despite this, at the theoretical level can be operated aircraft similar weight on the deck. Tested not so long ago an electric catapult gives an opportunity to raise plane weighing up to 45 tonnes, the same will be able to overpower and samoletopodemnik. For such machines would be more desirable engine F135. Engine with greater thrust and bypass ratio can not fit here. But the F119 from the «Raptor» looks «like a native.» The machine is equipped with a «looking down» active phased array antenna can be a refreshed version of the station with the F-22, 2-bay load (length 7.5 m) and bolshennymi internal volumes that allow you to position the tanks for 10-12 tons of fuel. Range without the use of mounted tanks will be about 3.3 thousand km.

By 2010, the program there was given a new title — Next Geneation Air Dominance (NGAD) — «Dominator air the next generation.» This allows you to expand and make the theme for this machine special weapons. As in the F / A-XX, optionally proposed to develop a manned aircraft, which can operate in an unmanned mode. Also, do not exclude the possibility of the creation of a special machine.

The new project will allow Boeing to settle accounts with the concern Lockheed-Martin, which won with his F-35konkurs JSF.

It was planned that the work on the samples of the upcoming fighter will begin in late 2011, which will allow to build a demo model already in 2013-2014. Boeing plans to build a manned and unmanned demonstrator.

Representatives of the firm Boeing believe that the main focus must be on the order of the Navy. The Company understands that the customer needs substitution «Super Hornet» has a higher thrust engines at supersonic speed, low visibility, built-in sensor design and supreme agility, in other words «deck Raptor». 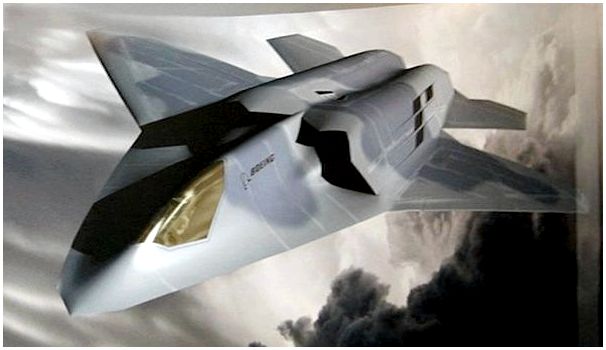 Featured in the 2009 version of the fighter «light» (18 million kg) was continued in 2010. Now, perhaps mindful of the failure of the «flying wing» X-32, Boeing Company showed a plane normal a erodynamic configuration, but perhaps with reduced maneuverability (vozduhopoglotiteli were moved to a higher part of the fuselage in the wind shadow zone), and such a subtle, achieved by eliminating the vertical tail and smooth belly. And if you focus on the «stealth» can still be aware of — «as it is stylish,» that denial of «air dominator» maneuverability in combat — a very controversial decision.

0
Like this post? Please share to your friends:
Related articles
Interesting 0
Society Former candidate for participation in the presidential election Sergey Ryzhov said that he
Interesting 0
Everything you need to know to start cranking out cash with your PC BY
Interesting 0
«… Air Force Commander Alexander Novikov reported that the two are ready to
Interesting 0
Above the summit crater of the volcano in Alaska Cleveland workers, local observatory
Interesting 0
December 1. Annual capacity is about 180,000 cubic meters of finished products used, including
Interesting 0
Disclose Truth TV introduced a new TV show with the participation of experts: Tarpeya
Categories
Фигуры и поле для пейнтбола надувные фигуры для пейнтбола.
SQL - 56 | 0,275 сек. | 11.02 МБ