) In this article, I would like to focus more on landing ship dock-conventional enemy LPD-17 type «San Antonio» and spend some comparison between these ships. 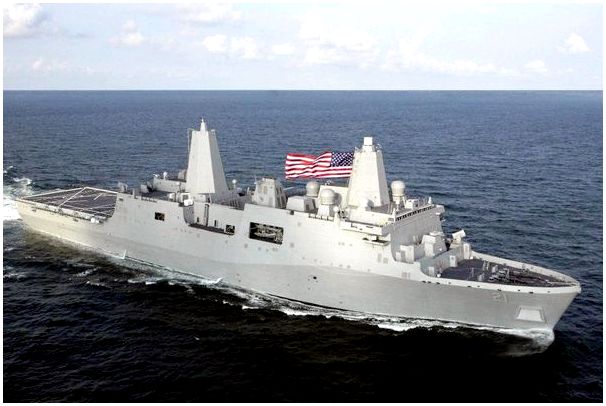 In January 1993, the Commission on Military Procurement United States approved the construction of amphibious ships, docks (Landing Platform Dock, LPD) such as San Antonio. The program LPD-17 was very ambitious, this type of ship was designed to substitute the 4 available types of ships — amphibious assault ships, docks type of LPD 4 Austin, tank landing ships (Tank Landing Ships, LST) 1179 Newport, cargo ships of Charleston (LKA 113), and amphibious transport docks type of Anchorage (Dock Landing Ships, LSD 36). In the end, twelve ships LPD-17 class will change and duplicate the ability of 41 others, the least modern ships. In December 1996, the Avondale shipyard won the contract to build a first-class ship (USS San Antonio) with an option to build another 2-hoo. The controversy surrounding formal contract called for delay in signing up in April 1997, and the construction did not begin until August 2000. San Antonio was launched in July 2003 and put into operation in January 2006. As part of the negotiations on the agreement in 1996, the Navy committed to purchase twelve LPD-17 ships, eight should be built at the shipyard Litton Avondale (Northrop-Grumman), and four will be built at the facilities of General Dynamics Bath Iron Works. In 2002, the Navy changed this Agreement by forwarding the construction of four ships with Bath Iron Works in Northrop Grumman, and at Bath Iron Works leaving the creation of four destroyers Arleigh Burke (DDG 51). Ships such as San Antonio LPD include a number of features of its own design, reducing the visibility of the vessel (stealthy characteristics). For example hull lines with a deliberate attempt to reduce the number of right angles hull and superstructure. Direct surface contribute to the radar reflections, while the angles of hull structures of San Antonio redirect the reflected radar energy. In addition, the ships LPD-17 series use advanced enclosed mast / radar (Advanced Enclosed Mast / Sensor-AEM / S). On a more regular courts, electrical sensors (radio, radar, radar receivers) have been installed on the open masts. The system AEM / S installed on the San Antonio both mast ship with sensors enclosed in a huge hexagonal structure. Although these structures are in some degree and aggravated the sensors, but its main function is to absorb the incoming electrical radiation and its redirection. In addition, AEM / S protects the sensors from the external impact, lowering the cost of service. System AEM / S ships of LPD-17 also includes a system of self-defense ship Mk 2 Ship (Ship Self Defense System, SSDS), which integrates the inside electrical sensors (radars, sensors ESM), the ship weapons system and electronic warfare systems, providing a single, integrated defensive network. 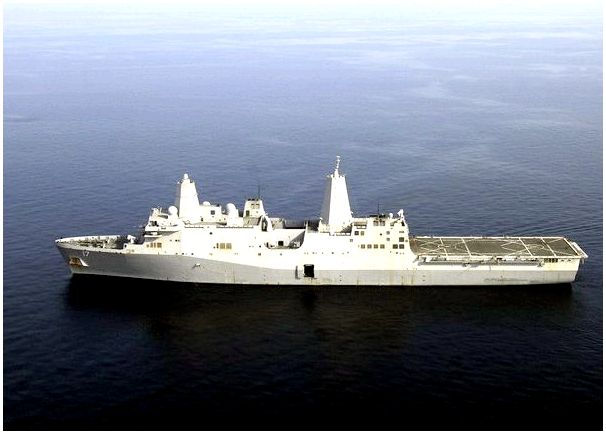 Naturally, all these improvements have a cost, according to some sources initially price target of $ 617 million increased to more than 800 million dollars in the first LPD-17. (There are contradictory information about the final cost as the lead ship series and the next. Some sources report a price of about $ 800 million, the other about $ 1.2 billion, and some even on the $ 2.5 billion Creator inclined to trust the sum of $ 2.031 billion for the eleventh ship of the series voiced in the report U.S. Congress). Although, LPD 17 and represents some progress in naval amphibious development and abilities, it was not without some compromises. On the ships of the San Antonio LPD missing some flagship ability to command and control available on some older ships of the LPD 4. Also lacks the ability to maritime transport, as in amphibious transport docks type of Anchorage (LSD 36) (3 hovercraft on LSD 36 in comparison with 2 on the LPD-17), and it lacks a bow ramp for unloading cargo on saved. In the end, LPD 17 is not the same material handling capacity of cargo ships of Charleston (LKA 113). At the current time in service are 6 ships of this type: San Antonio LPD-17, New Orleans LPD-18, Mesa Verde LPD-19, Green Bay LPD-20, New York LPD-21 and San Diego LPD-22. 2 further has floated: Anchorage LPD-23 and Arlington LPD-24, and finally another 3 are in various stages of: Somerset LPD-25, John P. Murtha LPD-LPD-26 and 27. Plans for the construction of the last ship has a series of conflicting information, according to some sources, the project was canceled, other funding will go just right. 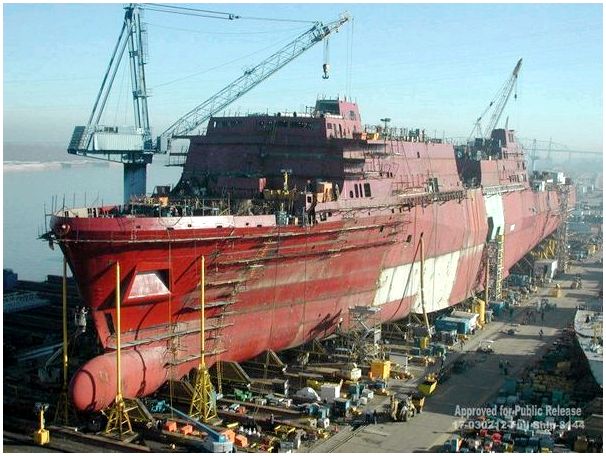 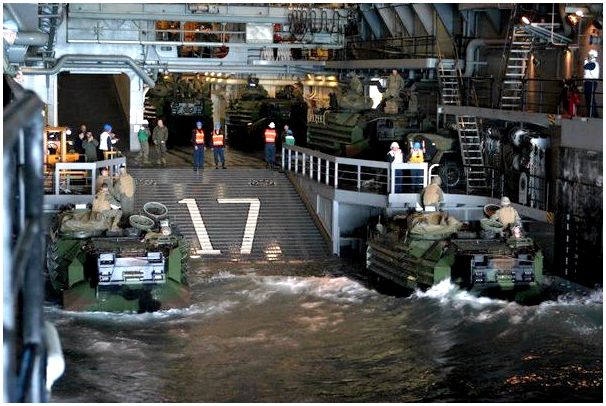 Dock at San Antonio looks like a class dock landing ships LHD 1 Wasp, which allows you to take out the back ramp and drop off or landing craft air cushion vessels (two standard hovercraft LCAC landing craft or one LCU). 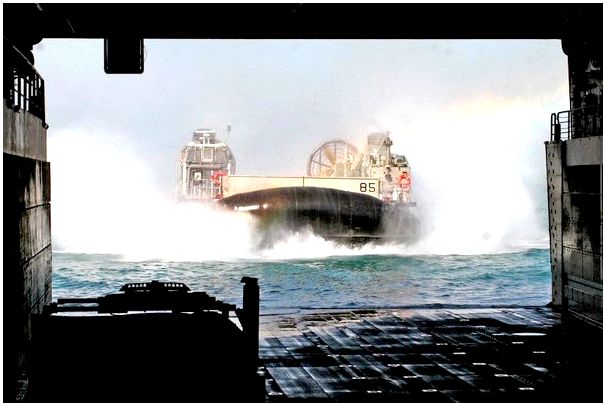 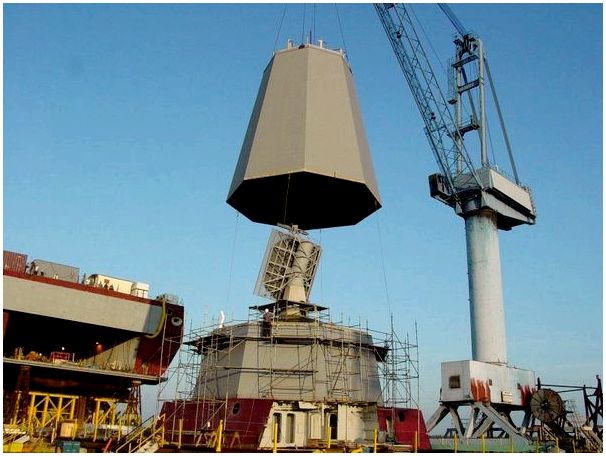 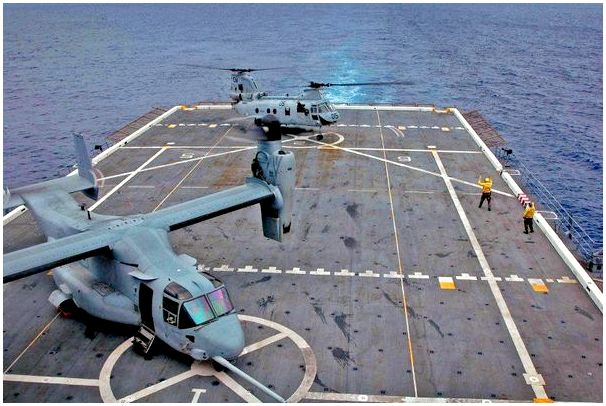 The ship is armed with 2 launchers Mk31 mod 0 capable of producing the launch homing short-range anti-aircraft missiles Raytheon. Rocket RAM (RIM 116) surface-to-air has a dual-mode radio frequency / infrared homing, and is designed to defeat anti-ship missiles. It has a range of actions 8 km. Also on board is foreseen in terms of volume and weight of the location for the vertical launcher rockets Seasparrow (ESSM).

For self-equip the ship with 2 30-mm guns Mk46 mod 1 with a rate of up to 250 rounds per minute. The fire control system includes a thermal imager, TV camera operating at a feeble light, and a laser range finder with a closed-loop tracking system. The gun can be specifically controlled by a central or remotely from the command center. Additional armament includes two Mk26 gun mod 18 caliber 12.7 mm.

It is not unusual that there are a series of lead ship prepyadstviya growth. Unable to avoid them and «San Antonio.» So, three years after its adoption for service has been allocated $ 6 million dollars to address the problems with the leak and control management. In 2008, the ship was laid up in Bahrain due to an oil leak. In 2009, during the passage of the Suez Canal on 2-engines at full power, one engine suddenly gained in working towards expanding the ship and almost pushed off him with another vessel. Also, the crew complained about the absence of all the necessary instructions and procedures and on the bad quality of the shipbuilders. As a result of the above, the Navy canceled the contract for the maintenance and repair company with Earl Industries. 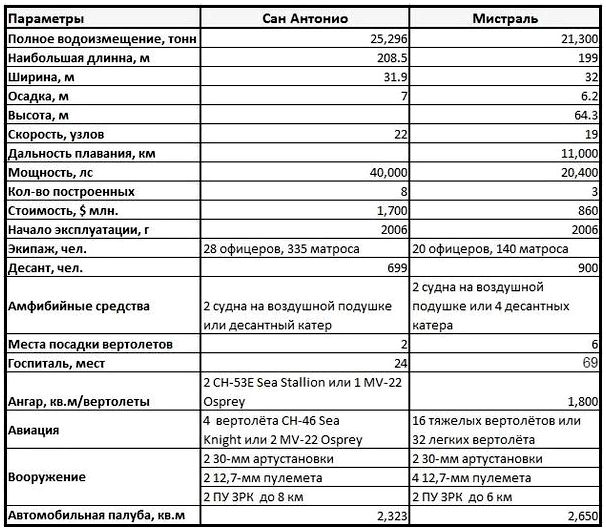 As can be seen from the table above, both ships are in fact the main ramereniya monotonous, speed and cruising range, car deck space, like weapons, both are in service since 2006. Type «San Antonio» has a stronger power plant that was built more ships of this type has a lower radar signature, more advanced electronics. For the rest of the main indicators «Mistral» has obvious advantages: the construction cost is significantly cheaper served by the smallest crew, is able to carry more troops and landing craft, has more seats in the hospital, more seats for helicopters, a large hangar. It is also significant to note the best maneuverability «Mistral» thanks to electronic rotary actuators screw and bow thruster.

0
Like this post? Please share to your friends:
Related articles
Interesting 0
Society Former candidate for participation in the presidential election Sergey Ryzhov said that he
Interesting 0
Everything you need to know to start cranking out cash with your PC BY
Interesting 0
«… Air Force Commander Alexander Novikov reported that the two are ready to
Interesting 0
Above the summit crater of the volcano in Alaska Cleveland workers, local observatory
Interesting 0
December 1. Annual capacity is about 180,000 cubic meters of finished products used, including
Interesting 0
Disclose Truth TV introduced a new TV show with the participation of experts: Tarpeya
Categories
Подробная информация японская бытовая химия оптом тут.
SQL - 47 | 0,238 сек. | 10.9 МБ