Somehow we, Slavs, pending read about a person just great words when his career is not over yet, and our mortal existence on Earth is not over. This is our nature. Yet, this man would like to tell at the moment, particularly because such people bring glory to Russian weapons.

Outstanding in our deepest conviction, gunsmith — Teles designer Valery was born July 2, 1939. Biography of his ordinary, except that enviable vsepostoyanstvo in choosing a job, he worked from 1965 to TsKIB sporting and hunting guns, which is located in the town of Russian arms — Tula. After graduation, he was about 6 years working as an assistant some recognizable Tula designers — gunsmiths, and in 1974 went into a narrow specialized branch — the design and the ready-propelled grenades. 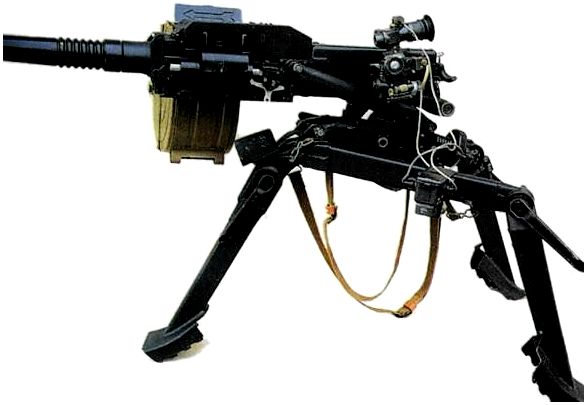 30 mm AGS-17 «Flame», who was then in service with the SA, has a weight of 30 kg, for infantry units was a dilemma, that of a heavy type of weapon breaking open all the tactical infantry units CA regulations. Teles VN activity is taken for the development of test article, a much more light-weight, able to create the latest shot 40mm grenade bezobolochnoe.

The history of the creation of the TKB-0134 «Goat» 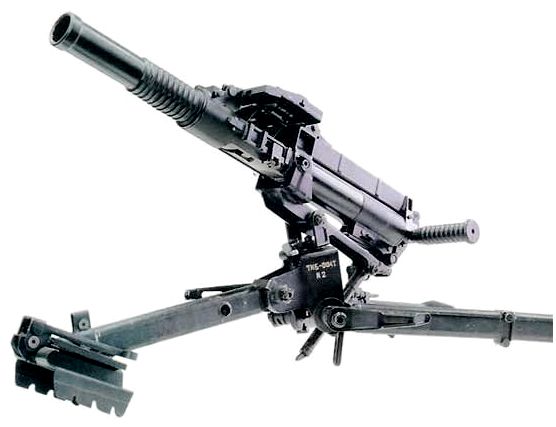 The entire range of these products, which started with the TKB-0134 was provided by gas operated automatics which locked the barrel channel rotating bolt. Drummer, who once served as a piston gas operated mechanism, has been aggressively connected to the bolt, and the manufacture of shot blasting it past grenades. Before firing the shutter moving parts were transferred back, filing tapes with hand grenades ammunition to the line of fire took place in the production of a rollback of the receiver when the feed lever came into contact with a slit shutter frame of figure types, and when the reel shot hit the trunk, which immediately closed.

The use of automation has gone by so commonplace, but constructive decision on its application can not be called a rather unusual.

Successful field trials in the field criteria using bezobolochnoe ammunition led to the creation of the ordinary, with a lovely light weapons ballistics. Came out beautiful standard weight of 16 kg, with a saved grouping and inflated muzzle momentum. By the end of the 80 gg.testy «goat» (referred to as a bazooka) were completed.

The history of the creation of the complex «Balkan»

Work on the creation of this complex began immediately after the tests, «goat», «Balkans» have started from the beginning of the 90s, in order to increase the firing range and its effectiveness compared with 30mm — shot. AGS-17. To this end, the designers changed the gauge in a huge way by constructing a rather unusual cartridge for this subspecies gun with a caliber of 40 mm, which was a bezobolochnoe shot. Soon, all preparations were completed, components and assemblies were prepared and tested, but the difficulties of the economy is not allowed to finish the job. They say that the military hitherto kept «Balkan» on the note. It is completely natural: the most experienced Russian standard of weight and efficiency of implementation twice as good as bezobolochnoe shot three times stronger South American unitary bomb loader. 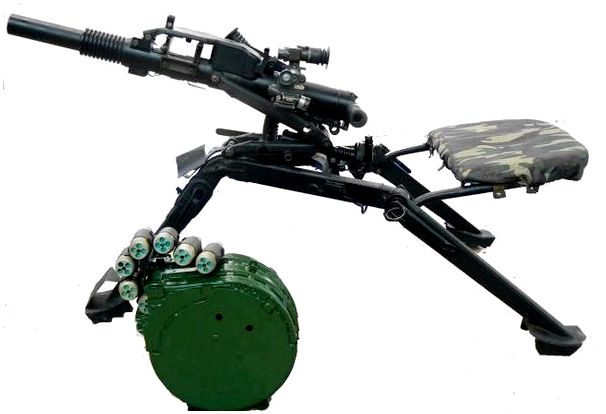 At the moment, the development of grenade launcher «Balkan», which receives an automatic launcher 6G27 on the machine and 40mm ammunition bezobolochnoe 7P39 to him, the company is engaged in special «instrument» — the main participant in the development of shots for automatic grenade launchers and guns of small caliber automatic type in. In 2008, this company has organized the delivery of the Russian Armed Forces 6 products «Balkans» and a certain amount of ammunition for the field test, so that is great possibility that in recent years, these products will be in service with the Defense Ministry. At this time, the technical properties of 40mm grenade launchers «Balkan» improved — there was progress in the firing range, which increased to 2.5 km, and the effectiveness and falling, also increased by 2 times compared with 30 mm — grenade launchers AGS-17 and AGS-30 .

Automation used in this grenade, one hundred percent repeats the scheme of automation products such as gas operated TCB-0134 «Goat.» Feed system is a rail gun tape with cartridges. For the production of fire tape with shots piled up in the clip — container round type, attached to the right side of the housing of the product. The grenade launcher is mounted on a tripod-machine similar to a similar product on the AGS-17 with a seat for the arrow on the rear pillars. Grenade «Balkan» is equipped with a telescopic sight.

In the period of 80-90 years. XX century, this Russian designer has participated in the following works:

— development of low-cost small weapons for ammunition SP-5 and SP-6, which have remained opytneyshemi standards;

One of the last works Teles VN was the creation of a 30mm manual «sniper» grenade TKB-0249 «Crossbow» under the serial VOG-17M and VOG-30. The need for the creation of such type of weapon was dictated by the changing strategy of warfare, the growth of terrorism in the world, often conducting combat operations in populated Fri 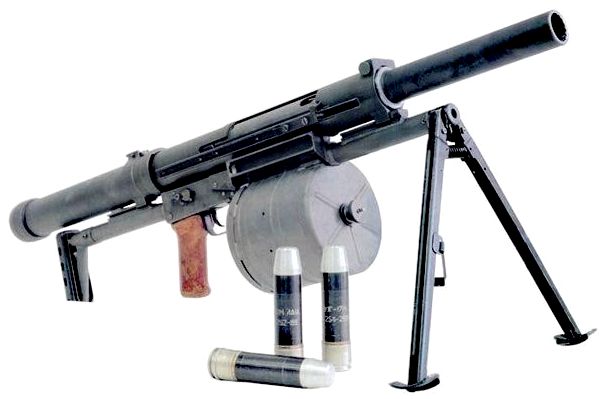 In developing the TKB-0249 «Crossbow» as a weapon designer chose a grenade with a sleeve VOG-17 (7P9) of the caliber of 30 mm and weighing 350 grams, which is an explosion struck a circle of radius 7 m pineapple VOG-30 is also considered as probable for the shot next deployment.

Since development of «Crossbow» was already on the way Thoren, he left a comfortable and normal. Americans already in the past 20 years trying to do such type of grenade launcher, only with more best features. As long as their is good for dynamic features, but a heavy grenade launcher.

In the opinion of professionals, «Crossbow» is a successful product, the smallness of the aesthetic is crude, but awesome in the multi-level.

Grenade TKB-0249 «Crossbow» is made pretty easy, equipped with folding bipod, «mechanics» and «optics» (planned in the future to equip the quantum or digital rangefinder), cages for 5 and 10 shots. The main feature of the product — designed for him damping: the return is approximately the same as the «Storm», a mass of 10 kg.

The latest news from sources close to the Defense Ministry, give reason to impose that this type of grenade launchers all the same will be in service with the Russian army.

0
Like this post? Please share to your friends:
Related articles
Interesting 0
Society Former candidate for participation in the presidential election Sergey Ryzhov said that he
Interesting 0
Everything you need to know to start cranking out cash with your PC BY
Interesting 0
«… Air Force Commander Alexander Novikov reported that the two are ready to
Interesting 0
Above the summit crater of the volcano in Alaska Cleveland workers, local observatory
Interesting 0
December 1. Annual capacity is about 180,000 cubic meters of finished products used, including
Interesting 0
Disclose Truth TV introduced a new TV show with the participation of experts: Tarpeya
Categories
SQL - 50 | 0,235 сек. | 11.37 МБ