Patriot air defense system is used to protect large administrative and industrial centers of the air and naval bases of all modern means of air attack in the criteria of a strong electronic countermeasures on the part of the enemy. The complex is in a position to immediately detect and recognize more than 100 targets, without annoying carry 8 of them to make the preparation of the initial data to the firing, launching and guidance to 3 anti-aircraft missiles on each target. Development of the complex began in 1963, all the U.S. Army Patriot air defense system was adopted in 1982.

Anti-aircraft battery consists of 4-8 launchers with four missiles each. Battery — this small composition of tactical and fire unit that can independently to solve all combat tasks. In most cases complex applied in the division. Patriot air defense system has a sufficiently high combat skills, is in service with the U.S. Army and is seen as a more promising complex to arm the NATO states. Effectiveness of the system is based on advanced circuit design, the use of units in the complex systems and advanced materials and a number of advanced technologies.

The structure of SAM Patriot cut one:

— a means of radio engineering and masking; 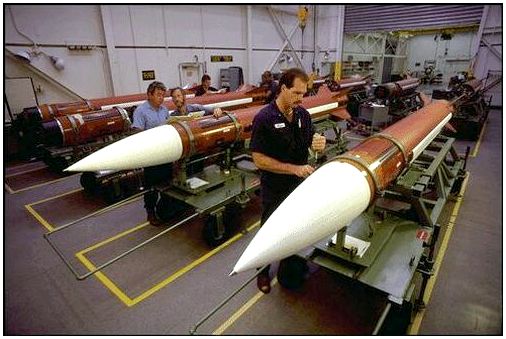 Anti-aircraft guided missile MIM104 used in the Patriot air defense system is a single-stage rocket, made by conventional aerodynamic configuration. The rocket contains the following sections (from the nose to the tail) fairing seeker, warhead, the engine management system (includes a control unit, four wheel hydraulic drive and control a cross placed stabilizers). When maneuvering rockets overload may be more than 25 units. Monitoring the condition of all systems of missiles is done using integrated devices, the reported defects that come with a computer fire control system.

Flight control is implemented using a combination of targeting. At the initial step rocket uses software management, in the middle section — radio command, the terminal phase of flight — a method used TMV (Track-via-missile — a missile target tracking) which connects the inside with semi-active guidance team. The introduction of TMV can significantly reduce the sensitivity of anti-aircraft missiles to methods of electronic countermeasures, it also enables you to fly at a good line of movement with a guarantee of the highest defeats the purpose.

The main performance characteristics of the rocket MIM104

KP fire control Patriot air defense system located in a special container which is mounted on the chassis of M814. Inside the shell Fri located along one wall of communications equipment and operator position 1 along the other wall arranged — a computer, a data terminal, the workplace of the operator 2 and a number of accessories. 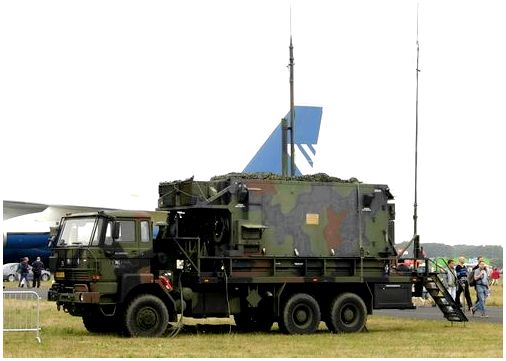 Just a crew consists of 2 operators. Each seat is equipped with an indicator of air situation with a diameter of 53 cm, the control device indicator, a set of keyboards for input and display information required to control the fire during combat operations, and control unit operation of all units of the complex.

One of the screens shows the overall situation in the areas of detection, fire control and battery, and the other shows available information on the management of all elements of the SAM batteries and the current combat situation. Use of special service equipment allows diagnosis of the individual parts of SAM and the entire complex, even during combat.

Radar is located on the biaxial semi-trailers weighing 15 tons and is transported by tractor wheel M818. Operation of RLS almost all automated. Her service is done Fri control combat crew in the 2 operators. Radar is capable of in this sector almost immediately find and maintain 90 to 125 targets and control the flight of all induced by their missiles. The largest range of identification purposes is 35-50 km. at an altitude of 50-100 meters and targets up to 170 km. at altitudes of 1,000-10,000 m in the spectrum Setting goals is achieved by the introduction of phased array and frisky computer, which controls the operation of the radar at all steps.

The control system provides the use of Patriot air defense system in conjunction with the aircraft remote discovery and management of E-3 «Sentry». In such a situation, Patriot could be in complete silence radar until the last moment — until the targeting of AWACS airborne. 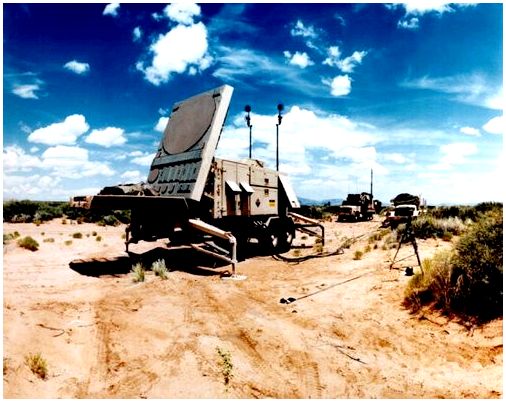 In the stowed position, the radar antenna placed on the roof of the cab. Choosing the sector of the radar is done by turning the cab in the right direction. At a fixed position cab, the radar can search for targets in the Gaza azimuth 90 degrees, also make them support and guidance for their missiles in the sector 110 degrees.

Corresponding feature of radar signals can be called conversion to digital form, enabling the use of computers to control the mode of operation. In radar used for sealing principle sensing, processing and reception of signals in time. The entire area that is visible radar can be divided into 32 separate sections, each of which during scanning one by one visible beam headlights. With all of this the length of the cycle in each area of approximately 100 microseconds., With the possibility of the radar configuration mode for each cycle.

The basic cycle time is spent on the search for targets in the sector, the lowest — in their support and guidance of anti-aircraft missiles. Duration of the complete cycle of the station search, the next target tracking and guidance on their missiles is 3.2 seconds. AN/MPQ-53 has also a mode of operation where the airbag is not controlled atmosphere in the entire area of the portions 32, but only at selected from them, which may cause more air targets.

PU is used for launching missiles of their transportation and temporary storage. PU is set to M860-axle semi-trailers, and is driven by the tractor wheel. The structure of the launcher comes derrick, lif ting mechanism missiles and guided them along the azimuth, the drive to install the radio tower, which is used to transmit data and receive commands to the control fire, communications equipment, power supply unit and an electric unit.

Since receiving the command to launch missiles, is used to enter the required information in the data storage devices. When the operator presses the button on the remote «start» to the equipment management system is powered on, then ground Fri fire control computer automatically activates the missile control system and make all the necessary calculations, preparing its method of flight. 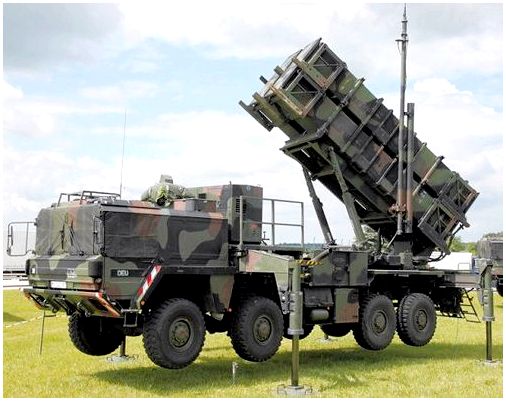 SAM reaction time is reduced by the preparatory Swing PU towards the alleged aerial attack, also by reducing the loss of time on the rocket on a given flight line movement. When the location of the complex on the ground for each of the PU sector fixed some places, while the sector these times overlap. So Makarov manages to reach vserakusrnosti firing, in contrast to the SAM, which use vertical launch anti-aircraft missiles, asking for a reversal to the target after launch. But the total time of system deployment with a march of 30 minutes, which is significantly greater than the deployment of Russian air defense systems.

SAM Patriot PAC-1 (Patriot Advanced Capability, Rus. «Patriot» with promising abilities). Efforts to complete it began in March 1985 and were intended to increase the efficiency of complex lesions by means of tactical ballistic missiles. The central objective was not chosen destruction of ballistic missiles, and its deviation from the aiming point at a distance of several kilometers. Improvement first underwent complex software, have also been increased scan angles radar.

The upcoming modernization also pursued goal provide cover small areas of impact of tactical ballistic missiles. Now puzzle SAM was not only a deviation from the target missile, and its complete elimination. In the process of modernization touched not only the software, and improved warhead missile, which has received a new fuse, and the amazing elements of increased mass (mass of the fragments has been increased from 2 to 45 oz.). Configuration data does not reflect on the defeat of the ordinary aerodynamic purposes and in the forthcoming upgraded missile has become the benchmark for all missile complex.

Within the next steps of modernization missiles got a new radio controlled fuses, once this was once again redesigned the interior of the radar AN/MPQ-53 program to improve capabilities to intercept the MAF. In the process of modernization, according to experts in the 4 times failed to increment the area defended by SAM Patriot from tactical ballistic missiles. 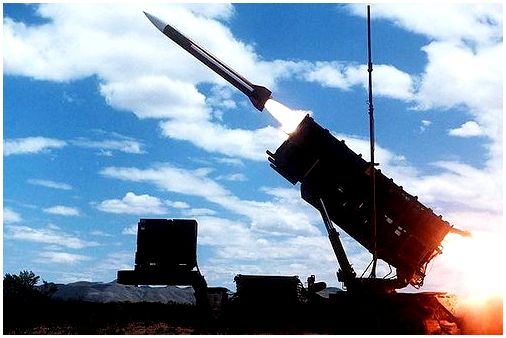 In the third step of modernization, aimed at increasing the efficiency of the imminent defeat of aerodynamic purposes, made by technology «stealth» and ballistic targets commission considered two options with rockets and MIM109 ERINT. In February 1994, the Competition Commission has chosen the second option. Rocket ERINT represents a highly maneuverable missile interceptors direct hit, single-stage solid-propellant missile, made by conventional aerodynamic configuration with aerodynamic rudders, ailerons and wings of small aspect ratio.

In the process of testing the missile did not once sought direct hits ballistic missiles. Since March 15, 1999 a direct hit by a rocket missile killed the target, which are the second and third stages of ICBMs «Minuteman 2». According to the creators, ERINT capable of destroying ballistic missiles with a range not exceeding 1,000 km. Because of the size of the least significant data on missile launchers M901 can be positioned 16 missiles. Of 4 pieces in each container under the MIM-104 missiles. In order to be most effective use of SAM Patriot PAC-3 is planned to connect with rockets launchers ERINT and MIM-104, which increases the firepower of a single battery by about 75%.

0
Like this post? Please share to your friends:
Related articles
Interesting 0
Society Former candidate for participation in the presidential election Sergey Ryzhov said that he
Interesting 0
Everything you need to know to start cranking out cash with your PC BY
Interesting 0
«… Air Force Commander Alexander Novikov reported that the two are ready to
Interesting 0
Above the summit crater of the volcano in Alaska Cleveland workers, local observatory
Interesting 0
December 1. Annual capacity is about 180,000 cubic meters of finished products used, including
Interesting 0
Disclose Truth TV introduced a new TV show with the participation of experts: Tarpeya
Categories
SQL - 47 | 0,318 сек. | 10.9 МБ