Well as you can! Is it time to stop the bully us? The Lord commanded us to think in terms of hope, not despair. Fortune-tellers, seers, futurologists, prophets, visionaries somehow just look to the future, as in the jar of spiders: frightened and disgust … Oh, how wonderful discoveries … that is to say, I’m sorry about how much we all have terrible predicted by today! And the truth, how much? 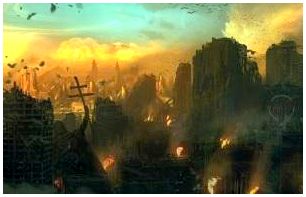 Good luck to you to die!

There will be many people who will argue with an affectation that the doomsday is not far off. Argument, «so many of them have already announced» has no effect, but you can try again. And about the Maya and Egyptian priests about, talked about the sunset and fall to earth, is well known. Thoroughly prepared for Judgment Day Montanists — the followers of the Prophet Moitanusa — even in the middle of the second century of our era! The pacification of the flesh, the rejection of any kind of property was — the smallest, as demanded by these cultists coreligionists. Well, that all the Crusades were carried out under the sign near the apocalypse, and say nothing — since high school know. Christopher Columbus, in his «prophecies» refer to the end of the world in 1656. But humanity and then survived.

And so many books have been published with the portents of approaching the end! And all of them became bestsellers — and in the XVII century, and XX. It is sad that there are fanatics who are trying their hands this end of the world is at hand: declare themselves prophets, lead to madness hundreds of thousands of people and … least satisfied with any self-immolation, and even organizing mass suicides, murders gullible followers.

Bloodiest «doomsday» was described in 1900 in the county Kargopolsky Russia. Members of the sect «Brothers and Sisters of the Red Death» announced the date of the apocalypse — 13 November. The leaders of these fanatics issued a proclamation stating that the Lord will be very happy if they bring a sacrifice through self-immolation. Of course, the news of the planned mass suicide flew to the capital, but where Saint Petersburg where Kargopol. While the Government to the troops arrived, more than a hundred sects had already died. Over a hundred years later, their example was followed almost fanatics from Penza under «Messiah» Pyotr Kuznetsov …

The peak of fashion at the «end times» have in recent history in the 1970s and 1980s. At this time, the book with the prophecies of doom diverged like hot cakes: how many charlatans warmed their hands on them — hard to say, but some, like the engineer Edgar Uizenanta have earned many millions. What books! One Korean «prophet» in 1992, just bonds issued with maturities expire two months after the promised end of the world where money is no one will be needed. The public bought the bond, end of the world did not wait, and the «prophet» earned half a million dollars. Enterprising Americans have created a public institution, «Watch the Millennium,» and the agency is engaged in the problems of the end times.

But progress is progress, and the most popular prophet Nostradamus was and is. Of course, the predictions of his dark and ambiguous, but there is a will — there uglyadet everything is possible. Well, here’s an example: «The year 1999, seven months pass. First come down from heaven, the great King of Terror, to resurrect the great king Angulmua, then the same will rule on Mars happiness to all.» Is not it true, «clearer» nowhere? However, in his other predictions threatened us with a real misfortune to live in the middle of a big war, plague and famine … And he promised terrible winds, terrible flood, the universal fire … As the saying goes, «if you do not think about the future, perhaps it is for you and will not come.» This is John Galsworthy.

And well Confucius said: «If you read the future, study the past.» That is, prophets of old frightened contemporaries those terrible disasters that have already happened to humanity only intensified pattern to the scale of space. Well, that’s the law of the genre: a nightmare ant should be the size of an elephant, and the elephant — from Mount Ararat.

Alas, nothing lasts forever, and the end of the world will come sometime. But let us in anticipation of universal catastrophe will not scare each other and themselves to death, but it’s just drop the skates of fear.

The truth about the end of the world

Attack of the media on our consciousness, associated with the end of the world, which supposedly predicts the Mayan calendar in 2012, has generated confusion, hysteria and fear. But this theory is based solely on myths. Let us examine some of them.
Myth One — the Mayan calendar

Without going into the complex astronomical and mathematical calculations, not figuring out meticulously, why they needed the millions of periods that the Maya themselves did not use, look at the calendar easier. Is in itself a stone circle, on which to center the, frankly, unpleasant face, perhaps, the author shows us the language. On each side — sectors with icons. And it is — everything. That’s it! As no written evidence, no interpretation of the Maya themselves have not. And the author of Maya researchers have doubt.

Therefore, phrases like «they said Maya,» «Maya predicted,» «Maya warned us» untenable. All interpretations, all designations, all calculations, the calculations were made by our contemporaries. On what basis? And the fact that they were looking at this stone circle. Even benchmark calendar (although in terms of what could be the beginning — he and the circle!) Were reported. We do not catch hold — neither forward nor back. And since there is no reference point, the alpha, then there is no omega. You should ask the author, where he put this point, where he began counting. But the author of the calendar, as well as the author of folk songs and jokes, does not exist.

The second myth — end of the world

The third myth — the center of the galaxy

Following the commercial value of the prophecy, we are afraid of the impending timing, that is, the alignment of the slope of our solar system with the inclined plane of the Galaxy. Supposedly we are crooked stand regarding the galaxy, and so can not we synchronize the very core of the planet. But as soon as our bank is equalized, and this will happen on that date, and this is where we show the galactic gruel.

The truth is that this synchronization occurs from time to time, as our solar system «rocks» on these waves of time, and not once has no end of the world in this regard has not occurred. So, the myth of the end of the world, though interesting, but it is not consistent. They can have fun, but to indulge in my mind should not be. It is useful for us to reality.

By walking in the Internet rumors, in December 2012 the first crash into the Earth planet Nibiru, which, of course, put an end to human civilization. So much so, that Internet users are bombarded with official laboratories NASA questions about this planet and that we expect in connection with her appearance. NASA has decided to respond. One of these responses, signed senior fellow NASA Astrobiology Institute David Morrison we give.

— The first time that the ancient Sumerians predicted end of the world, said Zachary fiction sit-rank. In his book, «The Twelfth Planet,» published in 1976, he wrote, if found some unknown official science Sumerian manuscripts, and they refer to the planet Nibiru. The planet orbits the Sun, but to make a full circle, it takes much of the earth 3600 years, so it is still no one could see. And recently, this, in fact, a hoax is superimposed on another legend: that, according to the ancient Mayan calendar, December 2012-th — the last month of the existence of our universe.

So, claims that Nibiru — a kind of planet, which was opened by the Sumerians, were born out of speculation and assumptions of the same Sitchin or groundless. Yes, the Sumerian civilization had a high culture. But they did not know that the planets revolve around the sun. The first ideas geleotsentrizma appeared in ancient Greece, two thousand years after the disappearance of the Sumerian civilization.

In general, Nibiru — pure fiction. With the present development of astrophysics is no «invisible» or «undiscovered» planet in our system can not be.

According to a forecast published by Forbes, in 2026, many jobs will disappear as unnecessary. Cashiers are not needed, since the store will move to automatic payment. Postmen disappear because «paper mail» will be gone. Instead of military pilots will fight drones. Disappear from cinema projectionists, labor leaders, miners and oil (mankind will move to other energy sources). But there will be new profession, such as a lawyer animals — it is assumed that by this time the fauna equal rights with men.

And here is a snippet of the forecast concerning geopolitics, Mark Leonard, director of foreign policy at the Center for European Reform in London: «In 2026, China’s economy will be larger than the U.S. economy. India will have more economic power than any European state individually. Russia, Brazil and Indonesia will yield only slightly. As these countries appetite for raw materials and intellectual capital will become insatiable. There will be a global clash over oil, water, and experts.

However, the vulnerability would be even great powers. Privatization of the right to destroy — from computer fanatics, suiting world chaos of his youth centers, to the terrorists, store in the international markets of weapons of mass destruction — will enable individuals and small groups to declare war states. «Gloomy prognosis, is not it?

August 12, 2026 will be a total solar eclipse. But on November 13 (it is also a Friday!) In 2026 at the time and was promised a kind of end of the world. It turns out that in 1960 in the prestigious journal Science published an article that was later reprinted in many other publications. It was reported that the famous mathematician — one of the founders of cybernetics Heinz von Foerster — calculated that it November 13, 2026 the world population will reach a level that can no longer feed themselves.

0
Like this post? Please share to your friends:
Related articles
Interesting 0
Society Former candidate for participation in the presidential election Sergey Ryzhov said that he
Interesting 0
Everything you need to know to start cranking out cash with your PC BY
Interesting 0
«… Air Force Commander Alexander Novikov reported that the two are ready to
Interesting 0
Above the summit crater of the volcano in Alaska Cleveland workers, local observatory
Interesting 0
December 1. Annual capacity is about 180,000 cubic meters of finished products used, including
Interesting 0
Disclose Truth TV introduced a new TV show with the participation of experts: Tarpeya
Categories
SQL - 49 | 0,265 сек. | 11.52 МБ