John M. Browning in 1889, has developed the design of a machine gun. For the base, he took a circuit with air cooling of the barrel and the removal of powder gases. With all of this Browning decided not to use the vent path and made a rocking piston. In the end, a light machine gun came comparable. In 1890, Browning sold the rights to create a machine-gun company «Colt», which in 1895 released gun, given the name «Colt» M1895. The South American Defense Ministry data guns purchased in small amounts. In addition, they were sold to England (first the war, they were used as training), Italy, Spain and some countries in Latin America. Before the First World War was created by modification M1895/1914 has weighted trunk without fins. Our homeland was almost the main largest buyer of machine gun «Colt» — he was the second mass (after the «Maxim») machine gun in the Russian army. 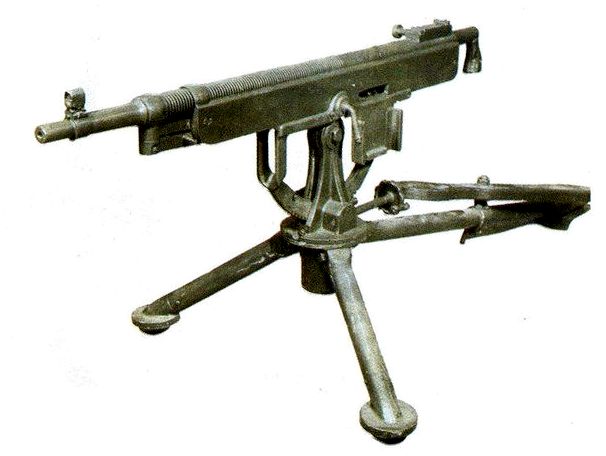 Gas operated engine was a unique scheme. Powder gases, after passing through the open hole in the wall of the barrel bottom, discarded piston mounted on the end of a longish shoulder crank — rocker crank. Connecting rod, turning 170 degrees, drives the crank (second lever) coupled to the gate through a sliding bar. Lath (Bolt carrier) is the leading element of the system. She, moving backwards, worked on the lug bolt shaped neckline. After lowering the rear of the bolt out of engagement with the bearing surface receiver — performed unlocking the barrel. Planck’s continuing movement relegated back the bolt and spring-loaded ejector valve sleeve is pulled out of the chamber. Liner hits the slide in the slot shutter tooth socket receiver and a lead-out window in the receiver is pushed out to the right. With all of this was compressed revertible pair of springs mounted in tubes under the barrel. Pivoting ear and stocks combined spring and rod kutsee shoulder, turned him forward, returning the mobile system to the initial position, the shutter shall be sent to the cartridge chamber, and when the trigger was pressed, carried out subsequent shot. The stroke length of the system was equal to 102 millimeters. Due to a corresponding movement of the piston and the dust lifted off take down the gas, machine gun M1895/1914 «Colt» was nicknamed «Potato Digger» — «potato digger.» It was the view that the air intake after each shot produced ennobled cooling of the barrel, but in reality it has provided only purge gas outlet openings.

In the tubular back plate installed trigger firing mechanism with helical mainspring and rectilinear motion of the hammer. The trigger is included self-timer and open the trigger. On the right side of the installed safety lever that locks the trigger. Handle reloading was under the piston at the end of the connecting rod. This handle for manually reloading tied the cord, the other end was mounted on the back plate. In general, and more than was comfortable circuit having a rocker arm and a block. On the back plate there was a control knob. 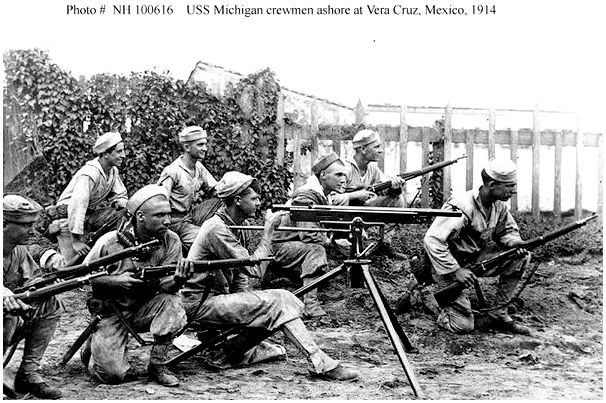 Meals are made from a linen gun cartridge tape is designed for 100 patrons. The system of power input of the receiver drum driven by a sliding plate, extractor, the device supplying the cartridge. The drum had two zubchatki — front lock the cartridge into the tape over the bullet back — for sleeve. Rocker arm supply created turn the drum. Arm was attached to the right wall of the receiver and contacted swinging feeder. Rotate the drum to the right to prevent the special dog. The cartridge was in the chamber of the tape followed properly. While driving back strap lug it pulled the tail of the feeder, the drive lever feed. The tail of the feeder jumped over the tooth drum, without turning. During the revolving movement of the arm rotation occurred revolving parts, with all this tooth feed lever turned the drum on a step, and the cartridge was facing the window receiver. Cartridge from the tape has been removed for a spring-loaded extractor rim. Extractor was mounted on a bracket and moved cartridge on the tray feeding device. Once the cartridge has been removed from the tape absolutely comb plates pulled the dog tray, which raised the cartridge to exit the frame extractor at this time let the cartridge and stop the movement of the tray so as not to interfere with the extraction of spent cartridges. During the movement of the working strip dovorachivat tray, with all this cartridge moved to a receiver box receiver, where picked up by the gate. Comb while entering the cartridge extricated dog tray and the tray fell. The projection plates pressed on the feeder, and the subsequent drum cartridge supplied. The design of the machine gun had 137 items.

Machine gun mounted on a tripod machine, consisting of a base, to which were attached one back and two front legs (hinged), swivel rocker part of worm gear mechanism with a vertical arc to hum. The body of the machine gun was set at the site of swinging through the bolt and adjusting screw, the holder of ammunition box located on the left side of the court. On the back of the leg was set rotating crossbar having rests for the elbows («low» tripod) or seat and a bag with spare parts («high» tripod).

In August 1915, after testing the machine gun, «Colt 1914 standard» rifle-range at the Officers’ School of Infantry, Major General Filatov, head of the school, said: «One person is very difficult to charge a machine gun … The abundance of breakdowns and their comparable large number indicates a low strength of its parts. » As it is often the case, the order of the Russian Federation claimed to improve the standard. For example, the first 1,750 guns were delivered with the highest so-called «French» tripod (a tripod company «Colt» delivered to France), with their slide was strengthened. General Shoemakers made significant efforts in order to «Colt» and «Marlin» began to supply «low» tripod. It turned out that the boards, which size is 685×445 mm, safer to do on Izhorskij in. They were used for 6.5-mm armor steel. 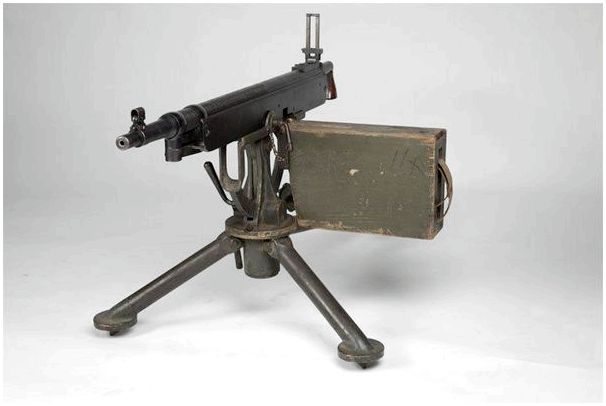 Guns’ Russian order «were equipped with a folding framework sight, notched up to 2300 meters, with a diopter completely — a sight clip had disc with five dioptric holes that were selected depending on the lighting and distance. The sight is equipped with a mechanism for the introduction of amendments to the side. Length of the sighting was equal to 855 millimeters band.

Machine gun «Colt» found its place in the Russian aviation. General Sapozhnikov 4 October 1915 specifically for the cash purchase of aircraft acquired in the UK 67 guns «Colt» (7 mm caliber) and a million rounds of ammunition. April 30, 1916, they were transferred to the aeronautic department GVTU. But soon after that GVTU returned to SAU part of machine guns that they be adapted to fire with incendiary bullets.

In late 1915, the machine gun, «Colt» offered a tripod with a seat, removable brass drum with tape, butt-wood handle. In this setting the infantry had found no introduction, but the butt and barrel were evaluated in aviation — drums mount, also bags of spent cartridges were ordered at the «VA Lebedev. » «Russian-Baltic Carriage Factory» produced simultaneously setting for «Vickers machine-gun and a Colt.» In 1918, the company «Marlin» released its aircraft modification machine gun (with venting the engine and the linear movement of the piston), and later the tank — in Russia this gun not supplied.

The order of unloading machine gun M1895/1914 «Colt»: Press the arrester is on the right side of the box to advance, freeing drum feeder. Pull to the left cartridge tape.

1. Removed trunk. To do this: bloodworm is given down-to-back. Holding it in the end position, pull the box at the bottom of the gas chamber via the barrel latch key screws. With such a key inserted into the slot in the trunk of his tooth unscrew and remove the barrel. Smoothly lower the crank.

2. Separated recoil pad. To do this, turn tail back closer butt plate located with his right hand, pull it to the right, holding the knob, pull the recoil pad back shaking it up and down.

3. Understands recoil pad. To do this: a wood support abutting tooth-timer to press the trigger, smoothly separate the parts.

4. Removed the bolt. To do this, take the rear crank last position and hold it in such a Makarov, normally open push the tail through the hole in the left wall of the box back plate axle bolt, release the crank and pull out the bolt.

5. Versed shutter. For this pin is pushed drummer and percussionist with the spring removed.

Assembling the gun is in working order.

Capacity of the tape — 250 rounds of ammunition;

The angle of the horizontal guidance — 360 degrees;

0
Like this post? Please share to your friends:
Related articles
Interesting 0
Society Former candidate for participation in the presidential election Sergey Ryzhov said that he
Interesting 0
Everything you need to know to start cranking out cash with your PC BY
Interesting 0
«… Air Force Commander Alexander Novikov reported that the two are ready to
Interesting 0
Above the summit crater of the volcano in Alaska Cleveland workers, local observatory
Interesting 0
December 1. Annual capacity is about 180,000 cubic meters of finished products used, including
Interesting 0
Disclose Truth TV introduced a new TV show with the participation of experts: Tarpeya
Categories
SQL - 50 | 0,336 сек. | 11.36 МБ