Plane The Su-37 is familiar to many, but most of the people this machine known as a modification of the famous Su-27 fighter. But in this article will talk about is not the fighter who is known to many for its demonstrations at MAKS, but on the other Su-37, which according to the plan of its founders had to be a continuation of the band tactical strike aircraft (attack aircraft), the Su-25. The aircraft designer V. Babak never appeared at MAKS, but in 1991, once was presented at an air show in Dubai. That was the first and last appearance of the Su-37 in public.

In 1989, during the implementation of Council of Ministers of the USSR and the Central Committee of the CPSU on the engineering plant them. Sukhoi began the process of development of conceptual design of functional fighter-bomber which received initial designation Su-37. The aircraft should was a change in the Soviet Air Force, and the Warsaw contract park tactical strike aircraft: Su-7, Su-17, Su-20, Su-22, Su-25, and MiG-21, MiG-23, MiG-27. In addition to that, the plane was planned to deliver in Finland, China, India, Yugoslavia, North Korea and several other countries.

The new aircraft was designed for ground attack (also above water) mobile armored and unarmored targets, areal and motionless for small targets, air defense systems, reconnaissance in normal and adverse weather conditions at any time of the day. In addition to that, the plane could be used to combat shock and transport aircraft of the enemy, he could successfully resist the army and tactical air forces of the enemy, including tactical combat aircraft and anti-tank helicopters.

The estimated highest level of aircraft performance characteristics of the Su-37 was the basis for ensuring the survivability and effectiveness over the battlefield. Quite a large payload, so rather short landing and takeoff distances, the possibility of basing on the ground and warped WFP also allow sufficient flexibility to consider the Su-37 is very successful and effective attack aircraft.

The cross section of the fuselage of the Su-37 and its wings have been optimized for use at low altitudes. The highest speed of the car at low altitude was estimated at 1500 km / h Cruising speed and range to the target at low altitude should exceed these characteristics in Russian fighter standing on arms and related to the 4th generation. At the same time low specific fuel consumption, provide a large radius plane acts without refueling machine in the air. With all of this opportunity was provided for this procedure. Estimated combat radius of the Su-37 combat loaded at 3 tons had to make — 1500 km. The calculated approach speed was 250-260 km / h and the speed of the aircraft at the moment of contact strip was estimated at 220 km / h

The basic version of the Su-37 for the needs of the Russian Air Force had to be impact aircraft, which would be replaced by the Su-25. With an increase of 40% gross weight of a new strike aircraft could carry 88% more battle load than revocable Su-25. But because the Su-25 could still meet their own destiny and be successfully perform combat tasks, while the Soviet Union had already experienced significant economic difficulties, it was decided that such a substitution after 5-8 years. 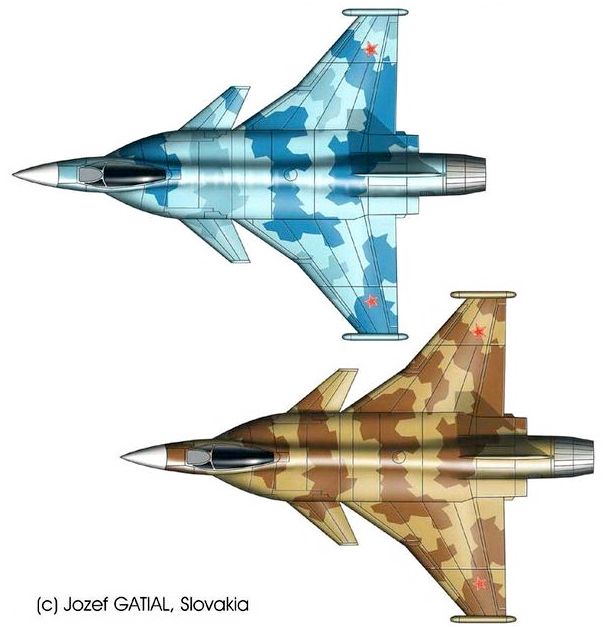 Ultimately OKB. Sukhoi has not gained currency allocations to create prototype of the Su-37 because of limitations in the state budget of the USSR. On this basis, the main focus has been chosen to promote international aircraft market. The variant in which the creation of Sou-37 provided in cooperation with the states that own the least-developed aviation industry. This solution has permitted to obtain inexpensive partners comparable spec, or multi-purpose aircraft, the Su-37.

Russian programm to create a new attack aircraft Su-37 seems to be anticipated a similar program from a South American JSF. The primary purpose of the Su-37 was to be the destruction of ground very hard targets. To solve the puzzles of the Su-37 was planned to equip a wide range of weapons class «air-surface». The total mass of the payload, which could reside on the 18 external hard points, was to reach 8.5 tons. Go with this new aircraft had to be able to solve puzzles and extermination, and the like in a maneuvering near and in a relatively distant battle with the introduction of guided missiles. Ensured this by including in the composition of his arms SD «air-to-air» of small and medium-range delnosti act. Besides the Su-37 was planned to equip a rapid-automatic gun.

Up close and Su-37 went to the JSF and its flight performance features. Both aircraft had to be able to provide supersonic flight, but with a moderate number of M (1.8 for the Su-37 and 1.6 for JSF) and without making cruising at supersonic speed. Both aircraft had a normal take-off weight of 20 tonnes (18 tons for the Su-37 and 17 tons for the JSF) and equipped with one engine. When the combat load of 4 tonnes estimated radii acts machines surpassed 1,000 km. 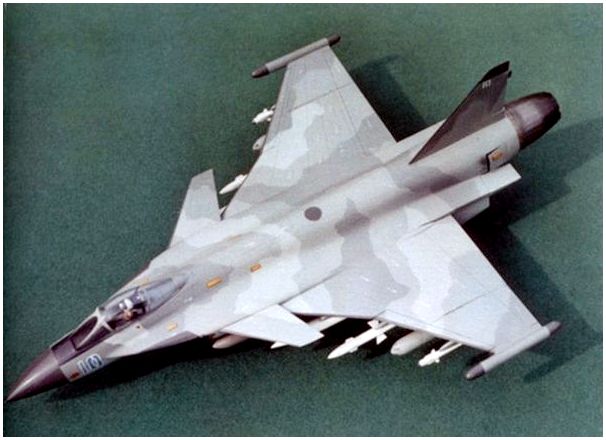 The only difference fundamentally 2-machines was their technical appearance. The plane had a different approach to neporazhaemosti in combat criteria. On the South American JSF highest neporazhaemost should be ensured by embracing new technologies, «stealth», while the Su-37 the issue was to be decided by the highest survivability of the entire machine as a whole. Accordingly, the bulk of funds that were to provide combat survivability of the Su-37, reaching 1.3 tons (more than 7% of the total take-off weight).

A final decision on the project of an attack aircraft Su-37 was adopted in 1990. By the time all the necessary documentation for the new aircraft was sent to the serial plant. The belief that «the process has begun,» was the basis for the fact that in 1991 international air show in Dubai has been demonstrated reduced model of the Su-37.

But the marketing campaign of the new single-engine aircraft was completed as rapidly as it had begun. Initially, even the action in August 1991 were not accepted in the workplace, as relevant to the fate of the project. So convinced were the creators in their own offspring. But still the Soviet Union’s collapse, the termination of funding for the work, the elimination of Minaviaproma and other acts of the early 90’s did their dark matter. Development of an attack aircraft Su-37 was not just suspended, it was forgotten.

By his own design Su-37 was performed on the aerodynamic configuration «duck» and had a delta wing with a break on the front edge. Close to the wing housed the frontal horizontal tail machine. Selected OKB. Dry aerodynamic design of the new aircraft was close to applied on modern European fighter «Gripen», «Rafale», «Eurofighter». With all of this in a wind machine assembly felt perceptible impact interceptor Su-27, which was reflected in the strong integration of the middle part of the fuselage, with its fairly developed wing. 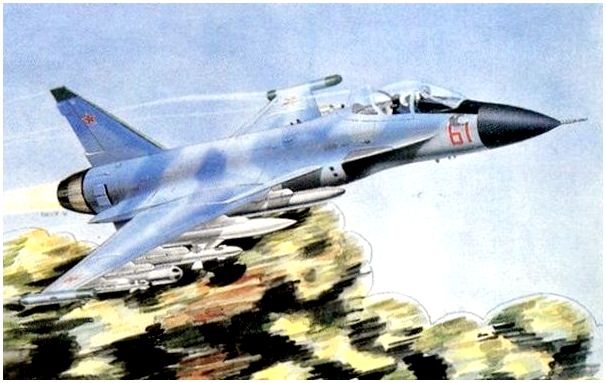 The biggest take-off weight of the car was 25 000 kg, including 8,000 kg. payload. The plane could withstand operational overload +9 /-3g. With subsonic aircraft can maneuver during overload up to 8g. The frontal horizontal tail (CHR) has the control surface that could deviate at angles of +10 to -70 degrees. Wing aircraft was supplied with slats and ailerons.

Almost everything in the design of an attack aircraft Su-37 was performed for the growth of its vitality. At first, it concerned the lower tail of the infrared signature of the motor, as partial implementation of technology «stealth». Application in the construction of new aircraft technology, the availability of defensive weapons systems made it difficult to detect enemy vehicles. To enhance passive defense aircraft cockpit was armored, armor also were covered important fundamental components and structural elements of the engine, fuel system, the airframe. Aircraft fuel tanks were protected by a polymer foam plastic that prevents burning and explosion of fuel in contact with the projectile or fragments. The total weight of only parts of the passive protection was superior to 0.8 tons. The ability to store the Su-37 is comparable to the small venues (folded wing span was 8.1 m), and the use of machines with unpaved runways could also significantly increment strike aircraft survivability in combat criteria.

The aircraft was planned to be equipped with by-wire control. The composition of navigating the complex plane was supposed to be brand new radar, which was to ensure the car even in the tough criteria for electronic warfare:

— detection, tracking and following settlement of low-flying targets across the full spectrum of flight speeds, and destruction hanging motionless helicopters, which are pretty hard to find. 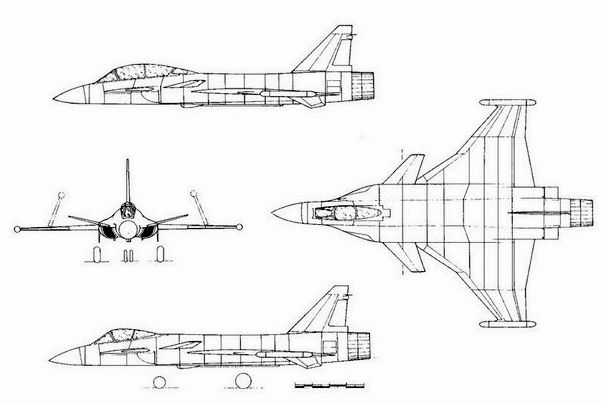 Optoelectronic system used on the Su-37, was to ensure the implementation of the machine at any time of day or night and also the launch of missiles equipped with thermal imaging and laser guidance systems, including missile systems. The multi-channel infra-red (like western development FLIR), could be installed in a special container and allowed the implement to hit targets with missiles infrared control at a distance of 10-15 km. In the hinged containers and equipment could be installed for IR, TV and photographic reconnaissance.

Attack aircraft Su-37 was planned to equip the engine design OKB. Tumanskiy owning at sea level thrust of 18,500 kg. Other than that addressed the issue of equipping the fighter-bomber with 2 engines. Vozduhopoglotiteli engines are under the influx of the front edge of the wing, which terminate at the forward fuselage under the cockpit.

The aircraft was planned to equip 18 points outside of the suspension, which allowed him to carry up to 8,500 kg. payload. According to this indicator Russian aircraft surpassed South American A-10 attack aircraft. This combat load and today it is more than impressive. In addition to the 30-mm automatic cannon aircraft can be equipped with a very wide range of weapons:

— All types of svobodnopadayuschie and bombs weighing up to 1,500 kg.

Flight and technical properties of the Su-37:

0
Like this post? Please share to your friends:
Related articles
Interesting 0
Society Former candidate for participation in the presidential election Sergey Ryzhov said that he
Interesting 0
Everything you need to know to start cranking out cash with your PC BY
Interesting 0
«… Air Force Commander Alexander Novikov reported that the two are ready to
Interesting 0
Above the summit crater of the volcano in Alaska Cleveland workers, local observatory
Interesting 0
December 1. Annual capacity is about 180,000 cubic meters of finished products used, including
Interesting 0
Disclose Truth TV introduced a new TV show with the participation of experts: Tarpeya
Categories
SQL - 47 | 0,235 сек. | 10.9 МБ