The famous Russian designer made famous AK-47, working at the same factory with the famous gunsmith Hitler

Mikhail Kalashnikov, designer of the majestic admitted that immediately after the war in Izhevsk worked with Hugo Schmeisser, the best gunsmith Third Reich. And he was involved in the creation of the machine is popular in the world — the AK-47. Tips German designer Kalashnikov assist to solve the problem of cool stamping.

— Schmeisser was in Izhevsk immediately after the war — says historian Alex Korobeynikov. — City of Suhl, in which he lived, was in the Russian zone of occupation, and Schmeisser, and other engineers and designers «invited» to move for a couple of years in the Urals. A special train with German spice arrived in the capital of Russian gunsmiths October 24, 1946. Exactly Schmeisser estimate the contribution to the development of the Kalashnikov assault rifle is difficult because the official documents in their work and are not available to historians until now kept secret, and the Hugo did not leave memories that reveal the details of his work in the USSR. Schmeisser had read about that period eagerly: «He gave Russian a few tips.» 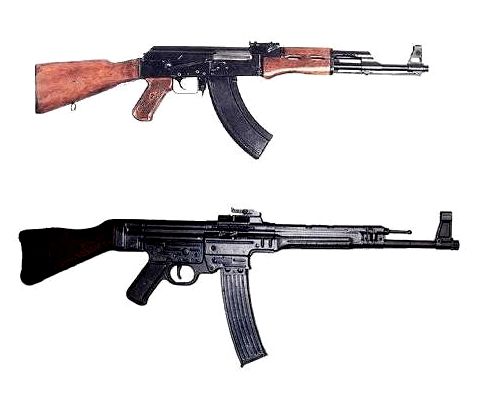 German designer left about himself in Izhevsk only a few letters and photos. The house in which lived the German gunsmiths, is currently in disrepair, and no one lives there.

— Schmeisser preserved letters that he wrote to the Ministry of Defense, — said a senior researcher at the museum in Izhevsk Kalashnikov Alexander Ermakov. — These letters — the only known written sources that were available in the archives. Designer complains to them on the living conditions, salary increment requests and resolve to go on home leave. Misha Kalashnikov arrived in Izhevsk in 1948, for the implementation of the model he designed the AK-47 in the establishment at Izhmash. Therefore read that the Kalashnikov «at loggerheads» design from the Germans for no reason. But what Schmeisser and Kalashnikov met at work, that’s for sure. He helped to develop new equipment and implement processes for mass production of the machine.

— Comparative external resemblance machines based on approximately similar mechanisms work — says historian Ermakov. — But the comparison of the internal structure and parts of states that are very different machines. In addition, Kalashnikov started developing his own machine already in ’43, and in the 46th it has already passed the standard tests. So attributing the Nazis to create the layout AK-47 it would be a mistake.

But reject the contribution of the Germans in the launch of «Kalash» in a series of impossible.

— Schmeisser was engaged in Izhevsk cool stamping technology until 1952 — says Korobeynikov. — And the award to launch a series of die-store and receiver belongs to a large part of it specifically.

0
Like this post? Please share to your friends:
Related articles
Interesting 0
Society Former candidate for participation in the presidential election Sergey Ryzhov said that he
Interesting 0
Everything you need to know to start cranking out cash with your PC BY
Interesting 0
«… Air Force Commander Alexander Novikov reported that the two are ready to
Interesting 0
Above the summit crater of the volcano in Alaska Cleveland workers, local observatory
Interesting 0
December 1. Annual capacity is about 180,000 cubic meters of finished products used, including
Interesting 0
Disclose Truth TV introduced a new TV show with the participation of experts: Tarpeya
Categories
SQL - 47 | 0,212 сек. | 10.86 МБ