In sci-fi movies are sometimes shown as an astronaut on foreign planets are attacked plants predators. However, to see these green monsters, do not make space travel, as they are sufficient, and in the world. 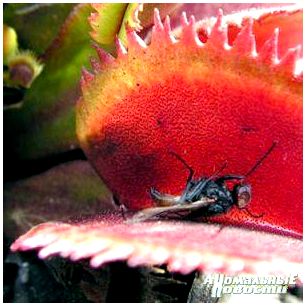 Little frog made his first walk in the woods. Jump, jump yet — and the poor creatures touched strange green leaves covered with hairs. Moment, and linked up like a sheet of the jaw, and a tiny frog struggled, trying to get out of the deadly trap. For a while, his feet sticking out of a sheet of carnivorous plants closed down the Venus trap, even fluttered, but here they are powerless to hang, and the green predator began his next meal.

There was a time when scientists did not believe in the presence of nature, carnivorous plants, many thought it unnatural, but botanists of the expeditions brought more and more evidence of the existence of unique green monsters that bright flowers, nectar or syrup-like liquid lured his victims into a deadly trap. They then isolated from the leaves of a kind of stomach acid and digested their captives.

Now well established quite a number of plants that eat insects and even small animals. However, there are very creepy eyewitness who saw the plants that can cope with quite large animals and even … man.

In the late nineteenth-century German scholar Karl Lihe claimed he witnessed the sacrifice monster of a tree in Madagascar living woman. She was forced to climb a tree, which obvilo her with its tentacles, vines, squeeze the body of the unfortunate huge leaves and a few days digested its prey.

In the 70 years of the twentieth century, traveling in the jungles of Brazil, the researcher Mariano da Silva met with the tree, which is powered … monkeys. It seems that it emits a sweet odor and curious animals climbed to the top of it, trying to find some delicacy. There they clasped huge leaves, and found themselves in the unfortunate monkey kind of «stomach» plant monster. A few days later the leaves unfolded, throwing herself completely digested bones of animals. Despite this evidence, scientists do not believe in the existence of such large plants and predators are waiting for more conclusive evidence.
Category: Flora and Fauna

0
Like this post? Please share to your friends:
Related articles
Interesting 0
Society Former candidate for participation in the presidential election Sergey Ryzhov said that he
Interesting 0
Everything you need to know to start cranking out cash with your PC BY
Interesting 0
«… Air Force Commander Alexander Novikov reported that the two are ready to
Interesting 0
Above the summit crater of the volcano in Alaska Cleveland workers, local observatory
Interesting 0
December 1. Annual capacity is about 180,000 cubic meters of finished products used, including
Interesting 0
Disclose Truth TV introduced a new TV show with the participation of experts: Tarpeya
Categories
SQL - 47 | 0,576 сек. | 10.87 МБ