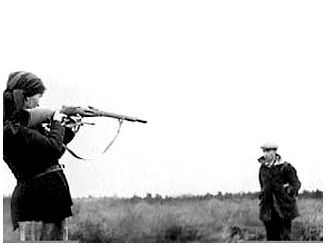 She had pinned hopes to receive three years of probation, but the Russian tribunal sentenced her to death. 1979 year in the Soviet Union was declared the Year of the ladies and she pinned its hopes on the goodwill of the court. But in the morning August 11, 1979 it was shot. In the Soviet Union it was the last big thing that is associated with the betrayers and executioners, who collaborated with the German occupiers during the war and the last and only time that a lady was shot.

Even the investigators did not expect such terrible judgment. No one argued that the fault Makarovna Antonina Makarova-Ginzburg in the massacres during the war was confirmed by one hundred percent. But on the other hand, since that time has been more than 30 years, and who was born in an ordinary working family lady, which in 1941 was 19 years old, it was impossible to recognize convinced Nazi and a traitor. Especially since those incidents in which she was, just gave her a choice. But the tribunal, meanwhile reasonably judged that the atrocities committed by Tonya do not expire, but what circumstances … a person always has a choice and the Tribunal held that in the distant 1941, Antonina Makarova made their own choices. Tonya got to the front of Moscow, where shortly before the war, she came from his own native village Small Volkovka Smolensk region. In Moscow, she was going to study, and later get a job, but all plans are crossed out war. Tonya took courses gunners, then nursing school, and in this capacity, and went into the army for the defense of the capital. Where got into a terrible slaughter Viazemsky boiler, in which perished nearly a million soldiers and officers reddish army out there in the environment, in the middle of a huge number of corpses at a young nurse once and for all break the psyche. Followed by several months of endless out of the environment, wandering around the Bryansk forests with occasional companions, just as it is moving eastward. In the end, Tonya was left all alone and walked, up hill and down dale, begged alms in the Bryansk villages, until finally she reached the village of Elbow, which fell into the hands Polizei. They raped her, fed moonshine, fed and raped again, and at one point during the day, most of intoxication brought out into the yard, planted for the gun and gave the order to shoot at standing in the yard of emaciated men whose hands were tied. And Fishery pressed the trigger …

Recording of the interrogation Antonina Makarova-Ginzburg from June 1978: «All those who had been sentenced to death were similar for me, just changed their number. I usually shoot the groups of 27 man, so many people housed a police cell. I shoot people in 500 meters from the bullpen, not far from a pit, where, and threw off the corpses. People put a chain of face-to-pit, one of the guys drags machine gun team bosses opened fire and shot until all fell. So I was doing my job, for which I was paid. We had to shoot not only partisan men, and their families, kids, ladies. Later, this is what I tried not to think. » For such «work» Tonya received 30 German marks in the day, there was a certain symbolism in this amount or not, now will not say no. At first, it was all for her, a blur, and before the execution of its watered schnapps, but later it was used and the saw after the shooting. With the youth of one of the characters was Tony Anka-machine-gunner, and here you are, a real gun, lie down and shoot. In the shoot anybody, Tone at this point did not seem fundamental. At the end of the «work» she rented from the corpses of your favorite clothes, washes it from the blood, alter itself. Neatly and carefully handled the gun, cleaned it, put off by the evening dancing and drinking with policemen and occupants. How many people she shot, Tonya did not count, but according to the testimony of witnesses Antonina was the only executioner, who brought the death sentences of execution in the elbow. After the war, representatives of SMERSH found in pits dug about 20,000 corpses. 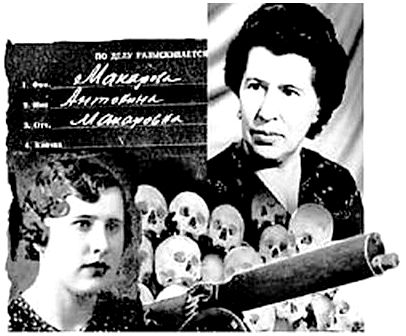 In 1943, she was lucky, she caught a sexually transmitted disease and was sent to Germany to heal, so Makarov, reddish when the army unleashed Elbow Tony-machine gunner was not there. After escaping from the German hospital, Antonina was able to celebrate the documents themselves and dissolve in the rear, she again went to work as a nurse in a military hospital, where he met his own future husband, married him and took his surname.

It found more than 35 years. The facts of her existence was pretty — many of who were captured policemen were in charge of the Tonka-machine-gunner, it’s about a girl executioner passed from hand to hand, push off into the archive, the newly floated out. KGB did not sit warehouse hands, carefully and secretly been tested everything! Antonina Makarova of similar age, but the searched among them was not.

A Antonina Makarova’s not hiding, except for the change of name to the name of the spouse. They lived together in a quiet Belarusian town of Lepel, after the war, Antonina wife gave birth to two daughters. Her portrait hung on the leader board, she was walking in the speech to the students, was awarded commemorative medals and gifts. Their family was strong and well-deserved family of veterans of the town. «You can not be afraid of life, the first 10 years, I’m still waiting for a knock at the door, and later completely calmed down, there’s no such sins in the world, who pursued a man all his life,» — read it later during the interrogation. Later it became clear why she was so long could not go unpunished. Even as a child, when they start school, the teacher wrote it down incorrectly in the metric, she recorded a patronymic surname. In 1976, one of the officials of the capital while traveling abroad honestly have listed the names of all of their own relatives, the family had 5 kids, all were PARFENOVA, but for some reason one was recorded Makarova in 45 by the name of the spouse Ginsburg. So Makar, intelligence agencies on the trail of a girl executioner.

Immediately detain her did not, for a year, investigators inspected all the facts, to sweep away all doubts and do not let God do not make a mistake, punishing pochetaemogo in the town of man, a veteran of the war. In Lepel to identify secretly brought the survivors of policemen and other witnesses, they all recognize the old lady has Tonka-machine-gunner. When arrested, she did not lie, and to resist, at first questioning she relaxed and began to speak clearly about what was happening in the German occupation, that so long and stubbornly tried to have forgotten it. Of the many thousands of Lokotskih found in the graves of dead bodies, identified only 168 people, specifically in their murder and accused officially Antonina Makarova. In 1978, the Military Collegium of the Bryansk regional court issued a death sentence to the defendant, in August 1979, he was brought to fulfillment.

0
Like this post? Please share to your friends:
Related articles
Interesting 0
Society Former candidate for participation in the presidential election Sergey Ryzhov said that he
Interesting 0
Everything you need to know to start cranking out cash with your PC BY
Interesting 0
«… Air Force Commander Alexander Novikov reported that the two are ready to
Interesting 0
Above the summit crater of the volcano in Alaska Cleveland workers, local observatory
Interesting 0
December 1. Annual capacity is about 180,000 cubic meters of finished products used, including
Interesting 0
Disclose Truth TV introduced a new TV show with the participation of experts: Tarpeya
Categories
honda aria on Jiji Kenya
SQL - 47 | 0,229 сек. | 10.87 МБ