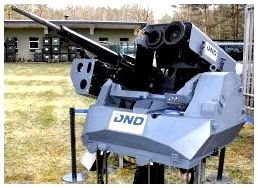 At that time, the system does not have its official name, the company she got the usual notation Dual RWS, as it can take two types of weapons at once (Dual).

Later he was given the designation Dual Fewas.

It was designed with an eye on the export market, and has already been shown, at least in one unnamed country Near East, where he was installed on wheeled armored combat vehicle, writes Jane’s. 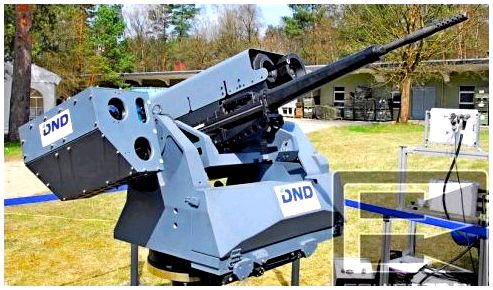 New dual remote-controlled weapon station from the company Dynamit Nobel Defence to the sensor unit to the left of 12.7 mm machine gun in the middle and 2 missile launchers series RGW 90 right

Was made two copies of the module and the second module is described by the company as «almost pre-production standard.» Final serial configuration will depend on the requirements of the final user.

The new module is likely to be installed on the upgraded and new machines as the main or auxiliary weapons, and miscellaneous marine vessels. Especially in this project is that machine guns or automatic grenade launchers in the module can be recharged from under armor.

Ammunition counter allows the operator to track the state of weapons and when the shops are empty, both cartridge box lowered into the machine body to replenish ammunition. The crew can also remotely set instrument module cocked.

Dual DUBM is motorized, twisting it at 360 °; electric vertical guidance allows for angles from -20 ° to +60 °. System protection from accidental discharge is fitted as standard. At the show the company Rheinmetall new combat unit armed with a new 12.7-mm machine gun Rheinmetall Machine Gun (RMG) as the main armament.

RMG in the current time step is the ultimate refinement, just the start of testing for compliance with specifications. Its installation will allow not only to reduce weight but also to obtain, for example, «sniper mode» shooting. RMG is funded by the German Development Ministry of Defense, which also intends to buy this gun.

GVW DUBM is dependent on complex weapons but usually is about 390 kg (about 280 soilless weight kg). All types of guns and stabilized, according to the company Dynamit Nobel Defence, he can shoot on the move with the highest probability of first round hit.

Usually, it includes one installation RGW 90 HH (HEAT / HESH — Anti cumulative warhead / armor-piercing high-explosive projectile with crushes the head part) and one unit with rockets RGW 90 AS (anti-structure — for the destruction of installations).

Rockets have the highest effective range of up to 500 m (HH) or 400 m (AS), distance to the target is measured by an integrated laser rangefinder. 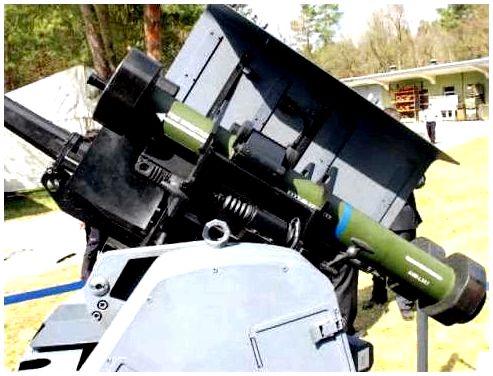 In rocket RGW 90 HH installed dual-mode impact fuze that allows the goal of more than 500 mm of ordinary rolled homogeneous armor, as well as wall bunkers or three brick wall. RWS 90 AS has a tandem warhead with a charge Break In Charge (BIC) and a bomb Follow Through Bomb (FTB), which according to the manufacturer very well against a wide variety of structures on the battlefield.

Mental fuse for FTB allows the shooter to choose from 2-modes: mode for explosive detonation inside the structure and mode «mousehole» for the creation of passage for a fighter. According to the company Dynamit Nobel Defence, the highest initial rate of 200 m / s and sustainer engine with constant thrust throughout the flight line of motion allows you to have the highest possibility of defeat. Touch the right side is installed, it includes daily CCD camera with an increase, uncooled thermal and non-hazardous to the eye laser rangefinder with maximum range of 5000 meters.

Dual Fewas module is connected to the platform via ethernet or canbus interfaces for interfacing with detector or even how the system controls the fight; all quick-change units installed inside the machine.

As usual for dual DUBM a number of options, including the possibility of different detectors and protection settings for weapons, ammunition boxes and sensory block. On January 2014 Dual module is ready for production and the company Dynamit Nobel Defence expects first orders.

Company braked on the base configuration with a machine gun RMG 12.7 and 2 missiles RGW 90. General, future customer requested installation guns Minimi 7,62-mm and M2 7,62-mm, and the German army are keen to track RMG 12.7 and 40 — AG mm H & K. Special units for the currently proposed solution with M2 machine gun and rockets RGW 90.

0
Like this post? Please share to your friends:
Related articles
Interesting 0
Society Former candidate for participation in the presidential election Sergey Ryzhov said that he
Interesting 0
Everything you need to know to start cranking out cash with your PC BY
Interesting 0
«… Air Force Commander Alexander Novikov reported that the two are ready to
Interesting 0
Above the summit crater of the volcano in Alaska Cleveland workers, local observatory
Interesting 0
December 1. Annual capacity is about 180,000 cubic meters of finished products used, including
Interesting 0
Disclose Truth TV introduced a new TV show with the participation of experts: Tarpeya
Categories
SQL - 49 | 0,220 сек. | 11.43 МБ