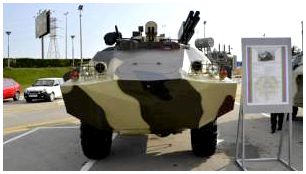 Engineers Ministry of Defence Industry of Azerbaijan made the latest military reconnaissance vehicle.

Machine made on the chassis armored reconnaissance and patrol vehicle type BRDM-2 differs significantly from vehicles BRDM as exterior design, as well weapons.

As you know, BRDM-2 has long been hopelessly outdated and many countries decide to sample its modernization. Often such modernization repeatedly price exceeds the price of the machine itself, the publication reports Andrei-bt.

Pretty toothy modernization developed in Azerbaijan, aviation armament consists of twin gun GSH-23L with the rate of 3000-4000 Venue / min. In addition to the tower mounted automatic grenade launchers and possibly for unguided rockets.

There is also a thermal sight and panoramic TV sight. Machine, the first experimental standard which will be on display at the exhibition «10 years of Azerbaijan» was tested on the test engine, chassis and others.

Recently machine passes the test shooting. According to professionals, regardless of the purchase abroad of certain technologies, which is armed with machine, in general, the design and content is 100% state-owned project.

Brand new car differs from zabugornyh analogues of this class the highest protection from mines, explosions and bullets. Double armor machine does not pass even armor piercing bullets of B-32. 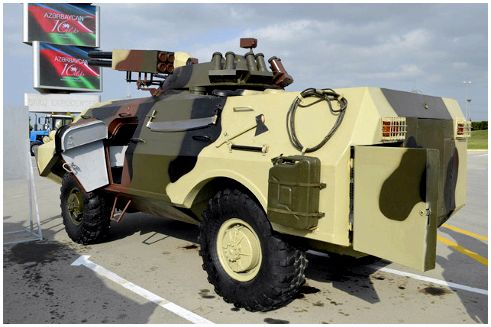 From the very BRDM after modernization is not a lot that’s left because quite recomposed body, in which there were doors in the sides and stern.

This machine is armed with a gun, 23 mm, twin machineguns 7.62mm AQ-17 grenade launcher, one 12.7 mm machine gun, night vision systems. Ahead, at the edges, back and top of the car armed with cameras, providing an overview.

Information from these cameras, reflected on monitors placed in front of the driver and commander. Combat reconnaissance vehicle has a total weight of 8152 kg and a turbodiesel engine with 155 horsepower.

0
Like this post? Please share to your friends:
Related articles
Interesting 0
Society Former candidate for participation in the presidential election Sergey Ryzhov said that he
Interesting 0
Everything you need to know to start cranking out cash with your PC BY
Interesting 0
«… Air Force Commander Alexander Novikov reported that the two are ready to
Interesting 0
Above the summit crater of the volcano in Alaska Cleveland workers, local observatory
Interesting 0
December 1. Annual capacity is about 180,000 cubic meters of finished products used, including
Interesting 0
Disclose Truth TV introduced a new TV show with the participation of experts: Tarpeya
Categories
SQL - 49 | 0,181 сек. | 11.41 МБ