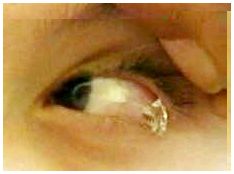 12-year-old Hasna Mohammed Maselmani Libya cries tears of crystal seven times a day. Despite the fact that the crystals are quite sharp, Hasna is not in pain. The doctors could not explain this unusual phenomenon. The story began in March 1996.

According to Hasna, she was at school, when I felt something strange in his eye — it was the first crystal. A few days later she was at home and heard a knock on the window, on the street, she saw a man dressed in white and a white horse. The rider asked Hasni out and introduced himself as «a messenger of God.»

The rider said that he «guilty» that Hasna «crying» crystals, and that this is the will of God. The question Hasni, when the tears stop, the rider said, «When God wants.» «White Knight», as called by Hasna, a few more appearances, and gave advice to the girl. During one of its meetings, he said Hasni that her whole family has to leave for a while, or else something bad will happen. The family followed the advice — all except one son.

The next day he had an accident, and although the car boys could not be reconstructed, and he himself escaped with scratches. On the same evening met Hasna «white knight.» He asked, «Did I not say that all of you have to leave the house?»

0
Like this post? Please share to your friends:
Related articles
Interesting 0
Society Former candidate for participation in the presidential election Sergey Ryzhov said that he
Interesting 0
Everything you need to know to start cranking out cash with your PC BY
Interesting 0
«… Air Force Commander Alexander Novikov reported that the two are ready to
Interesting 0
Above the summit crater of the volcano in Alaska Cleveland workers, local observatory
Interesting 0
December 1. Annual capacity is about 180,000 cubic meters of finished products used, including
Interesting 0
Disclose Truth TV introduced a new TV show with the participation of experts: Tarpeya
Categories
instagram stories anonymous
SQL - 50 | 0,227 сек. | 11.3 МБ