Universal torpedo to destroy enemy submarines was created for research and production association «Uranus» Department of the Union of Russian shipbuilding industry in the 1970s. Chief Designer — V.Levin. The main tests were run with the submarine of project 690 of the «Mullet». After a successful test comes into service as part of the military anti-missile complex «Waterfall» (RC-6) in 1981. The smallness of the later modifications occur universal torpedoes, which are also taken into service. Basic introduction — anti-missile systems and anti-aircraft weapons. 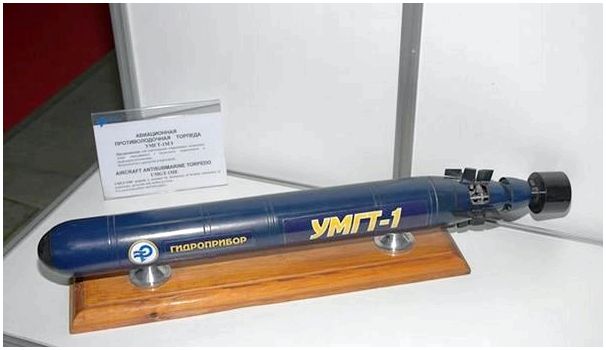 The main purpose of UMGT-1-destruction enemy submarines in any of their position, the cargo ships and different ships with a small booking. Last modified universal torpedo Russian designers have created a NRI «Gidropribor» — past the «Uranus».

The arrangement and design

— compartment of the control unit;

— stability and braking systems (implementation of the parachute system).

For the control and guidance torpedo used low-frequency acoustic homing active-passive type with amplitude 2-planar equisignal guidance system, «Waterfall», developed under the control of head designer Yu.Ivanova at the same company. Managing electromechanical drive uses the power take off shaft universal electronic motor torpedo. Control units are assembled in the candy bar and bear within themselves the logic of the homing system. Development of controls took place under the control of the head designer I.Loginova. Electronic engine single-shaft type DP-52. As a mover device used JMC. CRS — a set of lightly loaded water jet equipment, which consists of:

ICS device to provide the highest compensation tilting moment in one of these modes. Such a propulsion given the opportunity to reduce the overall properties of the electronic motor. But, at the same time, he claimed to increment capacity used batteries, because the efficiency of the acts at CRS equal 0.68. Designed CRS CRI Academician A.Krylova, running S.Kulikova designer. Used acoustic remote detonator type NCA-1 having a groove radius of response of 3.5 meters. Developed under the Yu.Kopylova. The radius of the active channel homing torpedo system 1.5 kilometers. High-explosive warhead type. As a source of energy used VHIT (water chemistry power source) on the product 554 — silver-magnesium battery. The battery consists of a cathode «AgCl» activatable ordinary sea water. In a modification of the torpedo «Ducat-2» began to use copper cathode — the battery is 554-MA. Development VNIAI. In torpedo use an open flow-through design electrolyte supply — sea water. For use in fresh water (including the Baltic Sea) is unrealistic.

When splashdown universal torpedo goes into the search mode and target detection, performing with all this circulation to the left with the trim and angular velocity equal to 7 degrees per second. The head of the torpedo sends sounding acoustic pulses returned signal is analyzed, and the proof of the homing signal system goes into capture mode purposes. When the mouse has a universal homing torpedo lead angle facing the target of 10-12 degrees. During the approach to a distance of 100-150 meters control devices forms the command «Attack» in which fuses are cocked and torpedo gaining attack speed to 41 knots. Upon reaching her goal is undermining. If for any reason torpedo hit the target, homing system goes to search again. 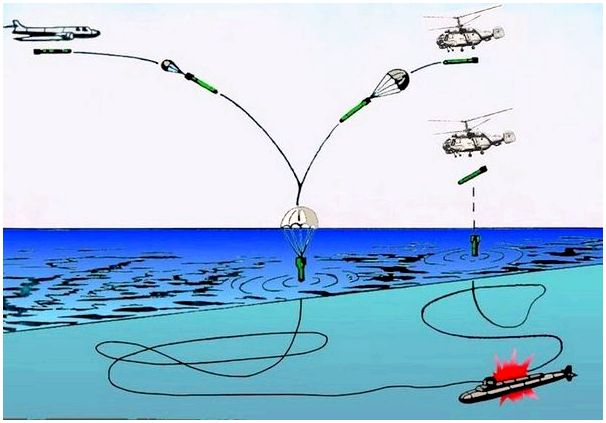 Universal torpedo uses PRS «Waterfall» in the process of testing for operational use in the Northern Fleet showed unsatisfactory results. Also, there were cases of low noise homing. Although first tested for interference, which took place in the criteria in the Arctic, there have been early 70’s, they were more or less applicable. First, the 80 difficulties CLO «Waterfall» was a burning for torpedoes USET-80, in what used this homing system and conducted tests for immunity in the shallow North Sea. In the latest versions prepyadstviya eliminated. On this day UMGT-1 in some modifications to this day is in service with the Russian Navy.

— the diameter of the parachute system — 500mm;

— range of actions to 8 kilometers when the command «Attack»;

— aircraft modification torpedo UMGT-1 «Orlan» or AT-3, entered service in 1984; 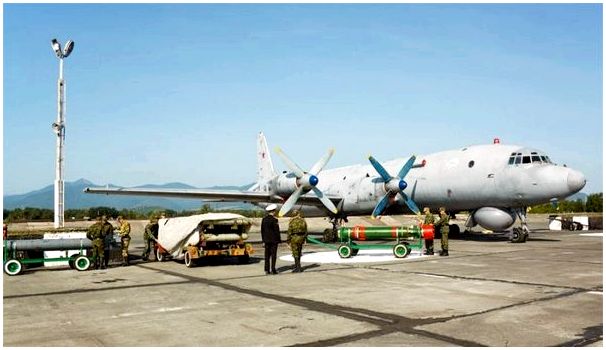 The main carriers of torpedoes:

0
Like this post? Please share to your friends:
Related articles
Interesting 0
Society Former candidate for participation in the presidential election Sergey Ryzhov said that he
Interesting 0
Everything you need to know to start cranking out cash with your PC BY
Interesting 0
«… Air Force Commander Alexander Novikov reported that the two are ready to
Interesting 0
Above the summit crater of the volcano in Alaska Cleveland workers, local observatory
Interesting 0
December 1. Annual capacity is about 180,000 cubic meters of finished products used, including
Interesting 0
Disclose Truth TV introduced a new TV show with the participation of experts: Tarpeya
Categories
SQL - 52 | 0,200 сек. | 11.51 МБ