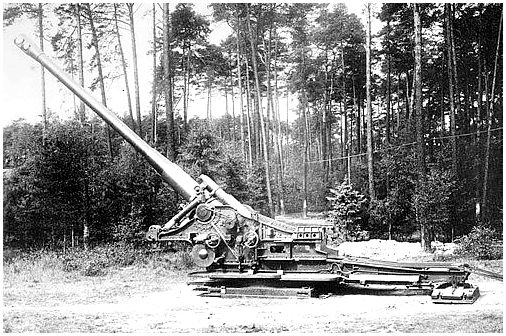 210 mm gun V-3 at the position in the firing position with a raised trunk.

In the summer of 1937 a commission composed of prominent Russian gunners visited the Skoda factory in Czechoslovakia. There she projects were presented 210-mm guns and 305-mm howitzers. Trunk Cannon was leynirovanny and howitzers — bonded. The closures in both systems wedge horizontal loading separate-case.

Do not resist the author’s statements — on the commission report a «nerd» from Artupravleniya granted «separate-case» and boldly wrote: «This is a negative — must kartuznoe.» At the end of 1930. «Kartuzniki» began another campaign against the separate-case loading.

Ultimately Russian side proposed company Skoda range of configurations. Following the negotiations, the company finalized the draft. The trunks of guns and howitzers were free liners. Wedges have changed on piston loading was kartuznym.

According to the agreement D/7782 from 6 April 1938, the company entered into Narkomvneshtorg Skoda, the latter undertook to do for the Soviet Union, one the most experienced the standard 210-mm guns and 305-mm howitzers with ammunition and accessory kit. Date of completion of prototypes was installed Dec. 1, 1939 Not counting a sample test were to be given a set of working drawings and other documentation for the ready these pieces of artillery. The total order price was $ 2.37 million (about 68 million euros). 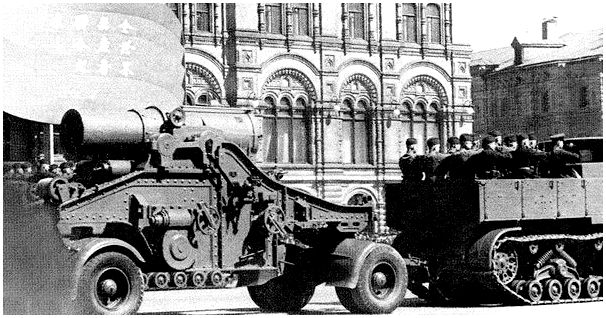 Russian cannon Br-17 on one of the pre-war parades.

On delivery of prototypes of tools and technical documentation did not impact the seizure of Czechoslovakia Germans. Skoda Company regularly made all the items of the contract with the USSR.

Reception tests (the surrender of the USSR), the two systems were from 22 April to 10 May 1940 at the site in Gylboke on the ground occupied by the Germans.

The report of Skoda said that the 210-mm gun steady while shooting a low charge at angles from 0 to 50 degrees, and a full charge — from +16 to +50 degrees. It should be noted that the instability of the gun at low elevations was not connected with the design of the gun itself, and the weakness of the soil, on which stood the ground. So Makar, Br-17 can be used in coastal defense for direct fire, but this would require a concreted base of the gun.

At the end of the test in accordance with the criteria of the contract and the gun howitzer in a complete form together with ammunition taken by the Commission and sent to the USSR for further tests.

In October 1940, the U.S. received pneumatic tire wheel system Skoda in the amount of 54 pieces (48 complete and 6 spares). Temporarily, until the development of the Russian industry of tires 12×24, 210-mm and 305-mm system it was decided to complete the wheels 12×20. 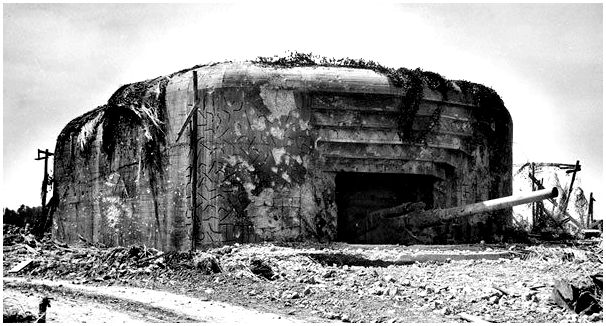 One of the German batteries in Normandy, armed with gun K.39, made by Skoda for Hitler’s Germany.

Experienced standard 210-mm gun Br-17, made by the number 221, was presented to the customer August 26, 1940 After the industrial test this standard on September 9, arrived at the Artillery research proving ground (ANIOP) to conduct field tests. Firing conducted from 21 September to 11 December 1940 A total of 110 made shots. Initially the farm was loading mechanical rammer. But he was uncomfortable and was replaced by hand «dosylnikom» of collapsible rod Bannik, and the head «dosylnika» was made in the workshops of ANIOP. «Dosylnikom» usually operated 6-7.

Management hurry and announced that the tests most experienced Br-17 standards were not sites, and Polygon-troop, and the results of their gun Br-17 and shot her betonoboynymi were recommended for the adoption. A high-explosive projectile tests could not resist.

In total, the Red Army had nine 210-mm guns, Br-17. In their readiness resulted only in 1944 was the first time they have been introduced to shooting tables and produced 4.2 thousand shells.

1 — base established in the pit.

In 1945, the 1st Regiment of the special power of a gun came into the 8th Guards Army of the 1st Belorussian Front. During the battle for the Seelow Heights and the Battle of Berlin was spent 930 210-mm shells, made in 1944

2 — carriage bore aligned with the machine.

305-mm howitzers, arr. 1939 (BR-18), it was only three pieces. They went on to form the 233rd individual artdiviziona special power that was in the end of the war in the Metropolitan military environment. Apparently, the howitzers were incapable of fighting.

3 — barrel embroiled in a cradle winch the machine until it stops the carriage rollers in the machine stops consoles.

In 1944, for the 21-cm guns Czech K.52 «converted» were made languid 232-pound feathered projectiles. For them, Skoda has made smooth trunks.

In the 1944-1947 years. Skoda Company on the basis of the experience of war was created by a unique 210-mm gun V-3, equipped with massive muzzle brake. Naturally, the company offered its products to Russian Union.

Experienced reference was to the USSR comprehensive tests. For a while, a few samples were serving in the Russian army. But its instrument of acceptance on arms founder found. It is possible that V-3 were considered «on the supply.» In 1950, the Russian language was published service management V-3. Incidentally, the Russian documentation gun and called V-3 and V-3.

210-mm gun V-3 at the position in the firing position.

But the establishment of the USSR no V-3, V-4 or OFF. Initially this was due to the work of Basil Grabina over the huge duplex — 210 mm gun S-72 and 305-mm howitzer C-73. But by 1960 because of voluntarism Khrushchev, who believed that a large artillery and special power of Russian army is not needed, and the work was stopped on Hrabinska guns, and to modernize the V-3.

Gun barrel V-3 consisted of a free pipe, casing, breech and muzzle brakes. Breech block is screwed into the case. The housing is worn on the tube with a gap. Muzzle Brake dvuhkamorny on both sides of it placed on two windows. The steepness of the rifling immutable.

The shutter plate with a two-stroke piston-type shutter Banja. Acts of the gate manually.

A distinctive feature was the combination of the rocking cradle oboymennogo cylindrical type with a rolled-back cylinders recoil devices. By the cradle attached two toothed quadrant on the vertical guidance. The mechanism of the horizontal guidance had two speeds. Mechanism for the frisky drive shaft in position for loading were not. Hydraulic brake roll, placed across the bottom of the rolled-back, hydropneumatic recuperator, placed on top of the rolled-back. Recoil length variable. Balancing mechanism hydropneumatic type with 2 symmetrical columns.

The base consisted of motionless and rotating parts. In a combat situation foundation sinking into a pit depth of 600 mm. Inside the base was placed ball strap, which allowed the gun to pivot 360 degrees. Epaulettes on the ball grounds relied turntable, which own the top plane was connected to the machine. On both sides of the turntable there was space for the calculation.

The rear of the turntable (Khobotova support) with a removable base plate on the end. On top of a pole attached Khobotova steel rails on which the cart was rolled for charging.

The rotating mechanism has two speeds guidance hand drive — the system does not have motors. With horizontal hover at first it was necessary to raise the base plate and lower it before firing again.

Devices for charging contained the track, located on the turntable base, and a cart for loading. Hand was laid on a cart shell and one poluzaryad. When firing a full charge second poluzaryad a tray to the gun the same number of calculation. 5 rooms calculate rolled over to the cart with the shot gun on rails. At the final step of the way tilt carts matched corner loading guns, in other words, was 7 degrees. At the last moment, rolling carts her support came in the slide slot of the barrel. To speed up the loading cannon appropriated two carts. Ramming the projectile in the bolt made 6-7 manually using the ramrod.

The scheme of the ammunition feed.

Rate of guns — 2 shots in 3 minute. The design of the trunk allowed such pace for 30 minutes. Further the rate of fire should be lowered up to 1 shot in 3-5 minutes. When firing a full charge survivability barrel sostavlyalya 600 shots. During the charge number 2 — 1300 shots, and at a charge of number 1 — 2400 shots. Shooting without a muzzle brake resolved only charge number 1. Note that the Czechs, like the Germans, the weight of the charge increases with the number of charge, and the largest was the last charge, and the minimum — charge Number 1. In the Red Army was all the opposite: the most powerful — a full charge, then the charge number 1, and the numbers continue to increase the charge reduced.

The system in the stowed position consisted of 3 special carts: Barrel carts, wagons machine carts base. The barrel had a special wagon, and the machine base and had only a wheel turn themselves constituted body carts. The wagon hooked claw arm front pivot turn to the tractor.

In Czechoslovakia, served as a three-axle tractor staff car of the highest terrain. In the USSR, for the carriage used crawler tractors «Voroshilovets» or AT-T.

Any carriage transported separately tractor with the necessary devices to transfer the system from traveling to combat, with tools and accessories for disassembly and assembly of individual groups of systems and spare parts. Accessories, tools and accessory could be carried on separately allocated vehicles.

Corps moves carts are equipped with pneumatic tires. Hoda carts were beyond cushioning on the leaf springs.

In the Soviet Union for the gun V-3 was designed with new shot explosive projectile. Work on it was stopped Feb. 15, 1961

Finishing chord in the fate of Czech guns in the USSR was quite sudden. Experienced 210-mm Czechoslovak tool since the 1960’s. was kept in the backyard Artillery Museum in Leningrad. About remembered him during the shooting of the feature film «Moonzund» on the novel by Valentin Pikul. In 1987, the gun found at an abandoned fort number 3 in Liepaja (Libau), where she «played a role» 305/52-mm open coastal battery installation at Cape Tserel. On the set of a gun even fired reduced charges. The maid was completely taken with Rzhevsky site. After the s hooting, the gun was sent back to Artmuzey, but this time set in the open exposure in front of the museum. At the moment, apart from St. Petersburg is far not frequent tool possible to see in Moscow in an open area of the Central Museum of the Armed Forces and the UMMC in the Museum of military equipment made of Ural Mining and Metallurgical Company. 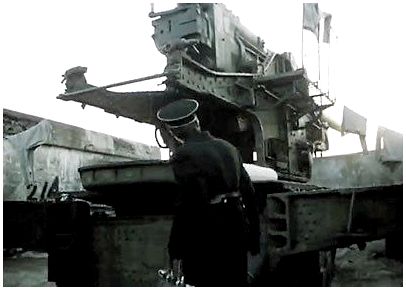 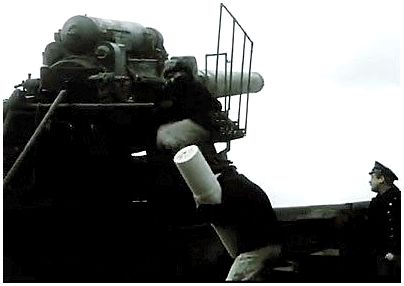 0
Like this post? Please share to your friends:
Related articles
Interesting 0
Society Former candidate for participation in the presidential election Sergey Ryzhov said that he
Interesting 0
Everything you need to know to start cranking out cash with your PC BY
Interesting 0
«… Air Force Commander Alexander Novikov reported that the two are ready to
Interesting 0
Above the summit crater of the volcano in Alaska Cleveland workers, local observatory
Interesting 0
December 1. Annual capacity is about 180,000 cubic meters of finished products used, including
Interesting 0
Disclose Truth TV introduced a new TV show with the participation of experts: Tarpeya
Categories
SQL - 56 | 0,263 сек. | 11.53 МБ