Russian scientists have captured how the body shaman during a magical rite ritual emits light. On film he appeared as the fiery flashes coming from a shaman to patients.

Yakut historian and ethnographer Anatoly Alexeyev, who has spent many years studying shamanism, I am sure that this is the great fire hidden healing power of the famous Yakut and Tungus shamans. «I have recorded on film energy human subjects and their electromagnetic fields, which can not be seen with the eyes, — the candidate of historical sciences, associate professor of archeology and history of Yakutia Yakutsk State University Anatoly Alekseev. — Thus, during the ritual, the shaman is the sacred action, the «spirit of fire» proved to be a natural phenomenon! «

The invisible hand of the flame shaman

Jubilee Events Alekseeva amazed the scientific world. While in Soviet times, he was a confirmed atheist, fought against paganism ireligii. But after his first meeting with the great Tungus shamans — Sheba (today he is considered the strongest in Yakutia) and Matryona Kulbertinovoy — his views completely changed …

«I realized that I was profoundly mistaken, — said Anatoly Afanasevich. — Shamanism — this amazing global phenomenon! In my eyes the great shaman Sheba in one session a Russian woman cured of a hernia in the spine. Unhappy 10 years suffered from unbearable pain in his back, and conventional medicine could do nothing to help her. Then she went to Sheba. Shaman tambourine under the blows in my eyes pulled out of her back … 3-cm white worm! All witnesses gasped. A sick and forgot to think about the pain … «

Since Alekseev for 18 years closely studying shamanism. He became friends with shamans, attending seances (from ham, stone — the name of the shamans in some Turkic languages of southern Siberia, a term in the Russian language designating special shaman rituals, during which he communicates with spirits), photographs, lectures on shamanism in U.S., Britain, South Korea and Japan.

In 2007, his documentary about shamans was shown at the United Nations in New York, last year won the gold medal of the study «World Civilization 2008» at the National Exhibition Centre. That the photographs Alekseeva by Japanese film camera F-«Nikon» -301, and recorded a unique phenomenon — a shamanic invisible fire. 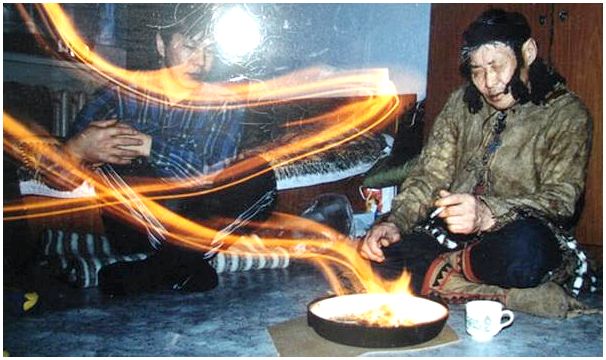 «In autumn 2007 in Yakutsk I photographed rite was held, which Tungus shaman Sheba (Simon Vasiliev), along with assistant Oktyabrina Naumova, — said Anatoly Alekseev. — After the film has been taken and printed on it stood out flashes of light and glowing force field shaman drum during shamanic ritual Sheba!

A year later, I photographed a joint rite shaman Sheba and Yakut shaman Fedotov. And again: the photos clearly shows how the fire from Sheba goes to the young shaman. «

The scientist asked Fedot Ivanov that he felt at the time of ritual. On the shaman said that he felt a sharp blow to the brain — it seemed shock shook! And Sheba explained that he fire hardened brain Fedotov. «Then I saw the statement: that one must go through a trial by fire, water and copper pipes,» — said Alekseev.

Scientists believe that the shaman fire — it is precisely the approach that the shamans heal people from diseases. In support Alexeev gave the following story. Three years ago, the wife of his close friend got cancer: doctors put her second stage. She underwent chemotherapy, but her condition remained critical — the disease has progressed. Then she took the shaman Sheba. He spent 3 sessions over 3 months, and the woman recovered. What is interesting, in pictures taken Alexeyev during treatment, again showed a mysterious shaman fire.

«We know well only visible light — reflects Anatoly Alekseev. — But infrared light is invisible — as well as radio waves, ultraviolet light, X-rays, beta, alpha and gamma rays — that is, the entire electromagnetic spectrum. We must assume that there are other radiation — visible light as a shamanic. «

It should be noted that Alekseev not the first to become interested invisible fire. It insisted on the existence of the ancient mysticism: it is mentioned in almost all the religious teachings of the East. This fire was present near Helena Roerich. Now Alexeev proved that the magic power of shamans is not only associated with the manifestation of the mysterious fire, but they also are able to mentally control it.

Even more ironic was the fact that the same effect of light and sound waves give: the shaman hits the drum, come out of it «lightning», and there is the effect of light. The impact of the shaman has a different effect, and invisible fire, according to Alexeyev, also changes color. «In my photographs, other than white and golden (ordinary fire) appear and orange, and red. I did not see these lights. But they appear when photographing process rite Sheba and Fedot Ivanov. Scientific explanation of this phenomenon is not «- he says.

As the scientists during treatment behind shaman Sheba manifested fire ax. When he asked the shaman and his assistant Oktyabrina why there is a fire, Sheba laughing and looking at the pictures, said: «This fire shaman — the spirit of fire. We, shamans communicate with spirits from different fields. The lights in the pictures — they are the spirits. And after the fire us to diagnose and treat a sick person different diseases. We agree with the spirit of fire and work together. This is the part of it that I control the fire. This is clearly seen in the photographs. «

Fire in photos Sheba told Alkseev, began to appear in 1997, the shaman believes that this is due to his spiritual perfection, he passed all stages of spiritual growth in the 40 years of shamanic practices — a shaman on the 7th, 10th and 12th sky. Today on representations relatives, Sheba may be a master is the «spirit of fire.»

0
Like this post? Please share to your friends:
Related articles
Interesting 0
Society Former candidate for participation in the presidential election Sergey Ryzhov said that he
Interesting 0
Everything you need to know to start cranking out cash with your PC BY
Interesting 0
«… Air Force Commander Alexander Novikov reported that the two are ready to
Interesting 0
Above the summit crater of the volcano in Alaska Cleveland workers, local observatory
Interesting 0
December 1. Annual capacity is about 180,000 cubic meters of finished products used, including
Interesting 0
Disclose Truth TV introduced a new TV show with the participation of experts: Tarpeya
Categories
SQL - 49 | 0,190 сек. | 11.43 МБ