3rd Reich lasted only 12 years, having failed under the blows of the Allied troops. With all of this winner-take-a truly rich booty, among which were the true wonders of technology, which in the 10’s years ahead of its time. It is no accident many researchers, these 12 years of the Reich characterized as the quintessence of scientific and technical progress. Specifically, the third Reich opened the public land road to the stars, giving significant impetus to the development of missile technology.

One of these trophies were drawings of orbital bomber, who had a huge number of titles Silbervogel (German silver bird), Amerika Bomber, Orbital-Bomber, etc. Now he is known to many as gallaktichesky bomber Zenger, named so by the name of its creator. This bomber was created as part of programs from Amerika Bomber (programm to create ultra-long range bombers to bomb attacks on the U.S.), could also be used for the bombing of the remote regions of the USSR, namely, Siberia and the Far East.

Of particular interest is the start of this unit. Orbital bomber offered to install the special «runners» who were equipped with rocket engines overclocking. Slide with the bombers were placed on a special flyover with the monorail a total length of 3000 meters. «Runners» were to provide thrust of 600 tons in just 11 seconds. After take-off, and the merits of the height of 1.5 km. at a speed of 1,850 km / h had to run the main rocket engine bombers who plan designers, for 8 minutes had to disperse combat aircraft and 22 100 km / h and raise it to a height of 145 km. Theoretical maximum altitude bomber was 280 km. 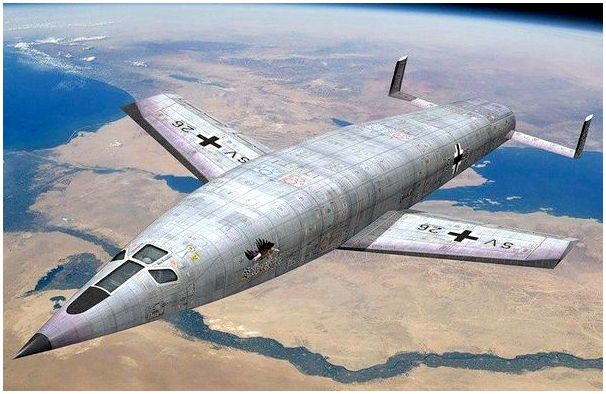 It was fun and the movement of the device in the stratosphere. The plan Eugen Sanger eventually the initial acceleration and the following descent by gravity to the dense layers of the atmosphere (about 40 km), the device had to push off from the dense layers of the atmosphere and soar again. This model allows the machine to travel not to go into the dense layers of the atmosphere, avoiding repeated saturated frictional heating. This motion model is familiar to many children and recalls the movement started up a flat stone on the surface of aqua. The amplitude of these jumps without annoying was to decrease to such time as the bomber would not have gone to the usual planning for a touchdown with the introduction of a conventional three-point landing gear. The estimated range of orbital bomber was 23 500 km. In fact, Sanger coined the concept of the aircraft, which anticipated the South American project «Space Shuttle» and the Russian project «Energy-Buran».

Description of the project

Austrian scientist Eugen Sanger was born in 1905. In 1929, Sanger graduated from the High School of techno in Vienna and began his scientific work. In April 1931 a young engineer and scientist began a series of tests with rocket engines. Within 5 years, he has managed to improve (by a huge number of static tests) regenerative cooled liquid rocket engine (LRE), which produced its cooling fuel, which circulated around the combustion chamber. This engine Zenger had planned to use in their own bombers.

For a long time it was ideology that the missiles are vorachivatsya in the lower layers of the atmosphere at a fairly low angle. In this worldview almost to the end of the second World War, all the calculations were based. But Dr. Eugen Sanger, in collaboration with the mathematician Irene Bredt, who later became his wife, offered a very different concept. According to their theory, the proposed missile had to return to the ground at an angle close to the right.

Zenger Bredt and prepared the respective scientific report, which was immediately classified and 100 copies distributed to more than a great scholar in the field. A number of these reports under the title «Far bomber with a rocket engine» was later found by special intelligence units of the allied forces.

First Zenger motivate the question of what happens if a cruise missile will enter the dense layers of the atmosphere (40 km) is very cool and very fast. From the documents it is clear that in this case the cruise missile had to ricochet. «Bounced» from the dense layers of the atmosphere the rocket went up again, more layers are discharged. After overcoming a certain distance, it re-enters the dense layers and ricochets back from them. The line of motion of the aircraft flight itself consists of a squiggly line with uniformly decaying amplitude. Produced by Zenger Bredt and calculations, this line of motion significantly increased given the flight apparatus.

Based on these calculations, Zenger has designed the concept of missile «bomber-antipode,» went down in history under many names. Designed as a supersonic bomber stratospheric machine. He had a lifting fuselage, which is partly a function of the wing was doing and was very very «lick.» Konusnovidnoy shaped wings were very small. Bomber had and horizontal tail, which was located at the end of the fuselage. Fuel was in 2 large tanks located on either side of the fuselage behind the wing at the rear of the machine. Similarly, but in front of the wing tanks were positioned with oxygen. The power plant consisted of bombers tremendous rocket motor which could reach 100 tons of thrust engine is housed in the rear fuselage and worked on kerosene and oxygen watery. In addition gallaktichesky bomber equipped with with 2 auxiliary rocket engines placed on the edges of the main. 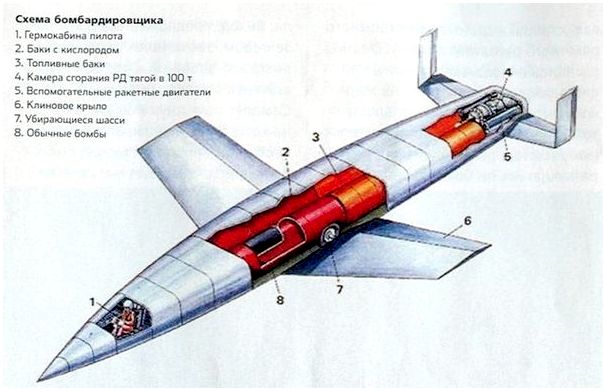 The pilot was located in a special pressurized cabin in the front part of the fuselage. To realize the gliding used tricycle landing gear. In the central compartment of the fuselage bomb bay was located, which could hold up to 10 tons of conventional bombs. Defensive weapons on a bomber set was not planned. It was assumed that the length of the orbital bomber is about 28 meters, wingspan — 15 meters, the dry weight of the device — 10 tons, the weight of fuel — 80 tons Full weight of the car with the bomb load was adjusted to 100 t

With such an impressive take-off weight for an unlimited amount of fuel required. There could assist simple boosters. Output, which offered Zenger, was to direct the construction of a longish starting area — the monorail length of 3 km. Next bomber was placed on a special slide, which could deliver the right amount of rocket engines. These jet sled had 10 seconds to disperse bomber by monorail to a speed of 500 m / s, then he was climbing already using its own propulsion motor.

According to theoretical calculations Zenger speed gallakticheskogo bombers could reach 6000 m / s, and the highest height Flight 260 km. made him an orbital. Bomber drove as described just above the line of traffic, the ninth lowest point would be in the 16 800 km. from the starting point. After which the aircraft within a certain time might be at an altitude of 40 km., And at a distance of 23,000 km from the launch pad began to lose altitude and proparhav another 500 km (half the total distance around the Earth), made to fit. Landing speed bomber was equal to 140 km / h, allowing the rocket plane ever to take which of the existing airports in those years.

The scheme similar flights was calculated by Eugen Zenger pretty sure though and had a number of shortcomings. For example, point-to-antipode for at least some places start with areas of Germany provided in Australia or of New Zealand, that is, area, which was in the hands of the Allies. Besides the city of the target is not always placed because of this sought «flight plan». No matter what the bombing was carried out with a line of traffic at a point, but even in this case, the dispersion of the implementation of the bombing would be very significant. The only city in the Western Hemisphere that the scheme would be under Zenger bottom line of motion, turned out to be New-york. With all of this myself bomber was heading to Japan or to the part of the Pacific Ocean, which was controlled by the Japanese forces on the ground and sat ally. 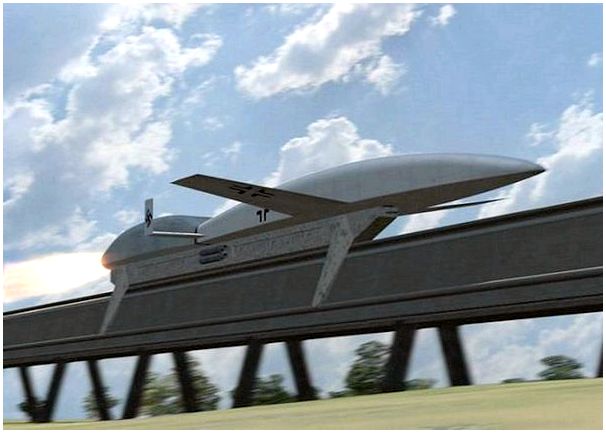 1st option divined start bombers in Germany, its output to near space flight and on the descending line of ballistic motion to the point of bombing and landing at the point-antipode. Because these points were from Australia or the region of New Zealand will inevitably rocket plane would have been lost with the pilot. Well bombing with very great height when using ordinary bombs were very inefficient. With all this considered a likely option dive on the target and the next bailout pilot. In this case, would be achieved highest precision bombing.

In the second embodiment, gallaktichesky bomber had to reach a point bombing bombed the target, then to turn 180 degrees and return to starting position. At the start of the rocket plane had to accelerate to a speed of 6370 m / s and reach a height of 91 km. In this mode, a ballistic flight line of traffic at a distance of 5,500 km. from the launch of its speed should fall to 6000 m / s and the altitude down to 50 km. After another 950 km. bombing was carried out, then the plane for 330 seconds, did a U-turn with a radius of 500 km. and vorachivalsya back. Machine speed of rotation after amounted to 3700 m / s and 38 km altitude. At a distance of 100 km. from the starting point is on the ground speed of the aircraft in Germany amounted to 300 m / s and 20 km altitude. The next step is planning and planting was similar to an ordinary plane.

With all of this embodiment mode Zenger saw «wave-like planning,» which resembled a line of movement of stone, rebounding from the aqua surface. When planning a space-rocket plane was due to a couple of times to be reflected from the boundaries of dense atmosphere, greatly increasing the chance of flying away. In order to fulfill such conditions, the orbital bomber Zenger had to develop the speed to 7000 m / s and achieve the altitude of 280 km. at a distance of 3500 km. from the starting point. First slide and «bounce off the atmosphere» at a height of 40 km. should happen at a distance of 6750 km. from the starting point. Ninth planning and «bounce» would occur at a distance of 27 500 km. from the starting point. After 3 hours and 40 minutes of flight raeketoplan, absolutely going around the earth, was due to land at the airport in Germany. The design point bombing was in this mode to the next slide to the borders of the atmosphere. 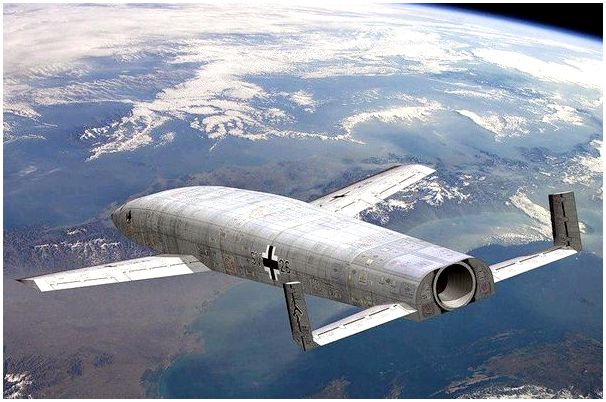 The report of Zenger ended recommending adoption of the scheme with the same base as more convenient, also listing the research work that had to make for the development of this truly «space» bomber. The project was supported by the bureaucrats of the High Command of the Luftwaffe, who offered to make a special secret research institutes in the town Trauen. The start of construction of a testing ground for full-scale testing of rocket motor Silbervogel was scheduled for June 1941. Implementation period applets was 10 years old, in fact it is specifically and ruined the project. In 1941, having started the campaign against the Soviet Union, Germany ceased all applets, which could give results in the coming years.

0
Like this post? Please share to your friends:
Related articles
Interesting 0
Society Former candidate for participation in the presidential election Sergey Ryzhov said that he
Interesting 0
Everything you need to know to start cranking out cash with your PC BY
Interesting 0
«… Air Force Commander Alexander Novikov reported that the two are ready to
Interesting 0
Above the summit crater of the volcano in Alaska Cleveland workers, local observatory
Interesting 0
December 1. Annual capacity is about 180,000 cubic meters of finished products used, including
Interesting 0
Disclose Truth TV introduced a new TV show with the participation of experts: Tarpeya
Categories
Подробное описание audcad у нас на сайте.
SQL - 47 | 0,213 сек. | 10.91 МБ