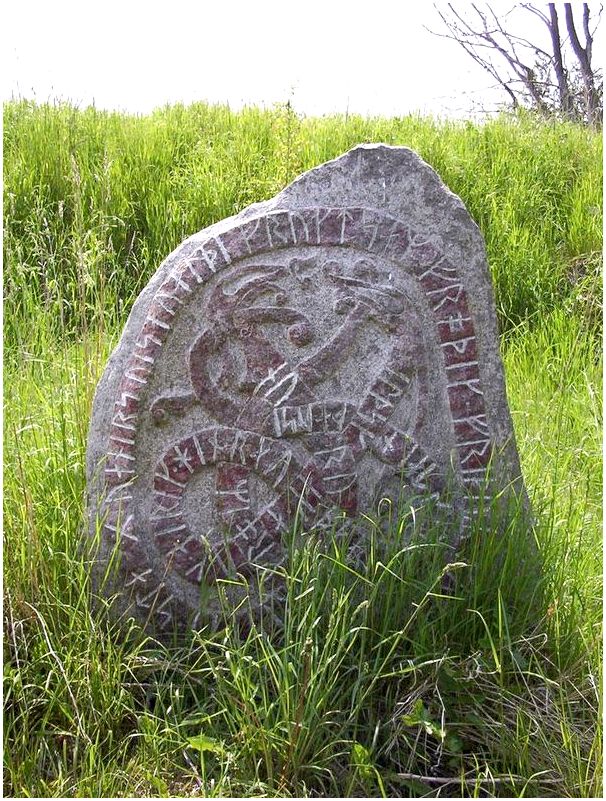 Form runes world are images of the World Tree, Universe. Also symbolizes the inner self of man, the centripetal force tending to the World Order. In regard to the magical world of Rune represents protection, protection of the gods.

In contrast fleece world, rune is Chernobog forces seeking world to chaos. Magic runes content: the destruction of the old ties, break the magic circle, out of any closed system.

Rune Alatyr — Center of the Universe is rune, rune beginning and end of all things. It’s around which revolves the fight the forces of Order and Chaos, stone lying in the foundation of the world, and this law of balance and return to normal. Eternal gyre events and fixed their center. Magic altar upon which the sacrifice is made are a reflection of the stone Alatyr. This is the sacred image that is contained in this rune.

Rune roads, endless road to alatyr, the way defined by the unity and struggle of the forces of Order and Chaos, Water, and Fire. Road — this is more than just a movement in space and time. The road — a special state, just great food and of vanity, and the rest, the state of motion between order and chaos. Roads have no beginning and no end, but it is the source and is the result of … The ancient formula: «Do what you want, and come what may,» could serve as the motto of this rune. Rune magic value: stability control, assistance in the journey, a favorable outcome of difficult situations.

Rune Wii — God Navi Underworld. This — Rune of fate, which can not be avoided, of darkness, of death. Rune tightness, stiffness and coercion. This magical prohibition to commit to an action, and tightness in the material plane, and the ties that hold down the human mind.

The Slavic word «stealing» means the sacrificial fire. This Rune Fire Rune aspirations and translating aspirations. But the embodiment of an idea is always the disclosure of this design world, and therefore stealing rune — is also a rune of disclosure, loss of off-rune, superficial — that is burnt in the fire of sacrifice. Stealing rune magic value — cleansing, release of intent, the embodiment and realization.

Rune Warrior Spirit. The value of the Slavic word «demand» — the sacrifice, without which it is impossible for the Road embodiment intentions. This is the content of this sacred runes. But the sacrifice is not a simple gift of the gods, the idea of sacrifice involves the sacrifice of himself.

Power — Heritage Warrior. It is not just the ability to change the world and ourselves in it, but the ability to follow the road, freedom from the bondage of consciousness. Rune of Power is both a rune unity, integrity, achievement of which is — one of the outcomes of traffic on the road. And yet this is the rune to win, for the Spirit Warrior’s a force just won himself only by sacrificing himself for the sake of external release of an internal. Magical significance of this rune is directly linked to its definition as a victory runes, runes and rune power integrity. Rune Power can we let a person or situation to win and gaining integrity, may help to clarify ambiguities and push to the right decision.

Rune of Life, agility and natural variability of Genesis, for immobility dead. There rune symbolizes renewal, movement, growth, life itself. This rune represents those divine force that makes the grass — to grow, juice land — flow through the trunks of the trees, and the blood — run faster in the spring in human veins. This light and bright fleece vitality and natural for all living desire to move.

This — Rune Spirit Fleece Vedaniya and climbing to the top, fleece will and inspiration, an image inspired the magical powers associated with the element of air. At the level of magic rune symbolizes the Wind-Wind Power, inspiration, creative impulse.

Bereginya in Slavic tradition — the female image, associated with the protection of the mother and the beginning. Therefore Beregin Fleece — Fleece is the Mother Goddess, was in charge of the earth and fertility, and the fate of all living things. Mother Goddess gives birth to souls who come to incarnate on Earth, and it takes away the life when the time comes. Therefore Beregin rune can be called Rune of Life and Death Rune. The same is the Rune of Fate Rune.

In all the branches of the Indo-European tradition, the symbol of the male member (the Slavic word «VR») is associated with a fertile creative force, transforming chaos. This fiery power of the Greeks called Eros, and Slavs — Xph. It is not only the power of love and passion for life in general, the strength of joining opposites, fertilizing the void of Chaos.

Rune is associated with the element of water, specifically — Live, running water in the springs and streams. In magic rune Lola — is rune of intuition, knowledge, out of Mind, as well — spring awakening and fertility, flowering and joy.

This — Fleece transcendent unmanifested Spirit, who is the beginning and end of everything. In magic rune Rock can be used for the initiation of an object or situation is unknowable.

This rune bases Universe Rune Gods. Support — this is a shamanic pole, or a tree, on which the shaman travels to the sky.

Rune Dazhdbog symbolizes blessing in every sense of the word: from material wealth to joy that accompanies love. The most important attribute of God — a cornucopia, or, in a more ancient form — a cauldron of inexhaustible wealth. The flow of gifts, current inexhaustible river, and is the rune Dazhdbog. Rune means gifts of the gods, acquire, receive or adding anything new ties or acquaintances, well-being in general, and — successful completion of any business.

Rune Perun — god of thunder, protecting the worlds of gods and men from the offensive forces of Chaos. Symbolizes power and vitality. Rune can mean a powerful but heavy, forces that can get things off the ground and give it some extra energy development. Symbolizes personal power, but, in some adverse situations — power, not burdened by wisdom. This is supplied by the gods direct protection from the forces of Chaos, from the damaging effects of mental, physical or any other destructive forces.

For a proper understanding of this rune sleduest remember that ice — one of the original creative elements, symbolizes strength alone, potentially, the movement still. Rune of the Source, the rune ice means stagnation, the crisis in the affairs or in the situation. Remember, however, that the state of icing, there is no movement, contains the potential strength of the movement and development (rune means there) — as well as the movement embodies the potential stagnation and freezing.