At the meeting in Busan Maritime Achievement Exhibition «Marine Week 2011″, the South Korean unit of UK MoD «Agency for Defence Development» model showed a small submarine project «KSS 500A». Submarine intended to change the line of duty submarines state project «KSS-1″ with a displacement of 250 tons. At the moment, South Korea to build two submarines type «Dolgorae», had risen in the UK commissioned the Navy in the early 80-ies of the last century. Work on the creation of MPL «KSS 500A» conducted since 2008. Now division «ADD» selects the probable manufacturers (suppliers) to be the main issue of the submarine. Until now, the fate of the upcoming submarine KSS 500A hitherto not been determined. The required funds for implementation of the project in the metal so far not identified.

[B] Key Features: [/ b] — displacement — 510 tons; — length of 37 meters; — width — 4.5 m; — maximum depth — 250 meters; — max speed / economy — 20/7 knots; — while the autonomous sailing — 3 weeks; — range of up to 2 thousand miles. — crew min / max people -5/10 — landing capacity — 14 people. Of the claimed features of the project MPL note the lack of electronic on-board generator to recharge the BATT. «KSS 500A» Go for surface movement traffic RDP uses the diesel engine is run for underwater movement uses the built-in electronic engine, which is aligned with the propeller and used to power 2 power lithium-ion BATTERY (charging takes place at the home base). 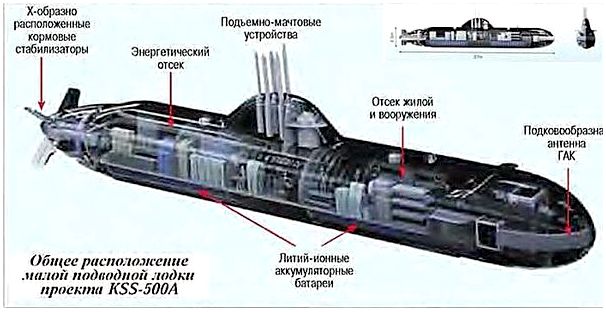 [/ B] The main sturdy thick-walled enclosure is divided into the 4th compartment: [/ b] — living compartment (the nose of the body); — compartment of the control room; — engine compartment; — spetsnagruzki compartment (aft part of the body). In the stern of a modular camera «Flexible Payload Module» to enter the job frogmen and for the introduction of underwater vehicles. In the fore part is a sonar system with a large antenna of the nose and 6 -2 TA TA 533 mm and 4 TA-caliber 324 mm. Under this project, it is possible to accommodate 2 modules with vertical placement of RCC or minutes. 5 retractable lifting masts reserved fencing arrangements. [B] PS [/ b] Project «KSS 500A» rooted in the seized from the DPRK submarine reconnaissance number one, who has suffered a tragedy at the time. MPL South Korean project — is a large-scale version of the captured boat, which won the TA. In similar submarines the DPRK, battle modification of TA are standard weapons. The appearance of «KSS 500A» — a copy of the submarine project 214. Although stated that the submarine small displacement, 510 tons refer it to the middle class. Of TTX is clear that the main purpose submarines — perform various tasks in the territorial waters of the DPRK. A generator Submarine has not been effective because of the anti-submarine defense of the DPRK and the time to recharge them at will. Installed batteries charge a day or 1-2, which in the submarine force in specific tasks is not there. It turns out that this Submarine — An electronic torpedo bombers with the crew with the possibility of surface speed. Shallow depth of 250 meters — it’s likely all that can give metallurgical factory, which obviously is not enough production technologies. 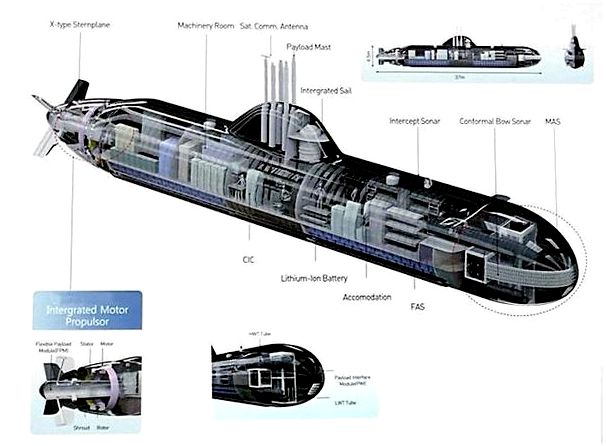 Issued submarine speed of 20 knots, points to the possibility of planning the use of MPL «KSS 500A» capture (capture) submarines DPRK. Used batteries are not admitted to the technical level of the discharge of more than 60 percent of capacity. This immediately reduces the range of the 2000 to 1200 miles. In addition, in those waters, where they plan to use the subs are strong undercurrents of overcoming them will claim an engine / motor at a high speed that hi to more Hassle-flow capacity of the battery. Time autonomously immediately fall by more than two thirds, and it turns out that to perform battle puzzles in the submarine «KSS 500A» is little more than a week. Torpedoes small caliber — own production, and 533 mm for the German torpedo «SUT». Use a U-boat submarines against North Korea is not the best idea. After all, even the first torpedo used by Korean submarines, torpedoes superior South Korean production. Only two German torpedoes something else can. In reality it turns out that «KSS 500A» martial traits is in line with the DPRK submarine «Sang-O». And they are a lot cheaper and are real boats of small displacement (256 tons). And the introduction of high-BATTERY exceptionally well in the case of performing the tasks of sabotage, because in any case after a military clash submarine will pursue, and she very quickly use up the battery capacity and remains vulnerable — either have to leave the boat and drown, or it will be captured. Even if the submarine will leave you absolutely have to replace the battery, making the submarine more more expensive to use. And the fact that designers do not set the generator on it. And if it is all the same to install, during the charging time (day or 1-2), it will be very vulnerable. Diesel engine mounted in a single execution will not pull and work and exercises. You can go for the installation of the shaft generator, but it will lead to a drop in speed and increase fuel consumption, not to mention the fact that the shaft generator is quite large and will have to significantly alter the project. [B] Result: [/ b] project MPL «KSS 500A» — kamikaze military equipment, and if so, why do the submarine itself expensive and large. Maybe the project «KSS 500A» help out the planned introduction of anti-ship missiles, but all the same issues of course remain unresolved.

0
Like this post? Please share to your friends:
Related articles
Interesting 0
Society Former candidate for participation in the presidential election Sergey Ryzhov said that he
Interesting 0
Everything you need to know to start cranking out cash with your PC BY
Interesting 0
«… Air Force Commander Alexander Novikov reported that the two are ready to
Interesting 0
Above the summit crater of the volcano in Alaska Cleveland workers, local observatory
Interesting 0
December 1. Annual capacity is about 180,000 cubic meters of finished products used, including
Interesting 0
Disclose Truth TV introduced a new TV show with the participation of experts: Tarpeya
Categories
Самая свежая информация Станок точильно-шлифовальный у нас. . Купоны на спа spa и массаж www.massagevmoskve.ru.
SQL - 50 | 0,538 сек. | 11.34 МБ