Recently, the editor of the Odessa channel «ATV» (dangerous construction) asked the Ukrainian army veterans who reside in Ochakov. They claimed that in the city’s port is something very strange: in its territory for more than a week in the military of the United States of America. Moreover, U.S. troops occupied not more than the construction of its base directly on the important strategic object. 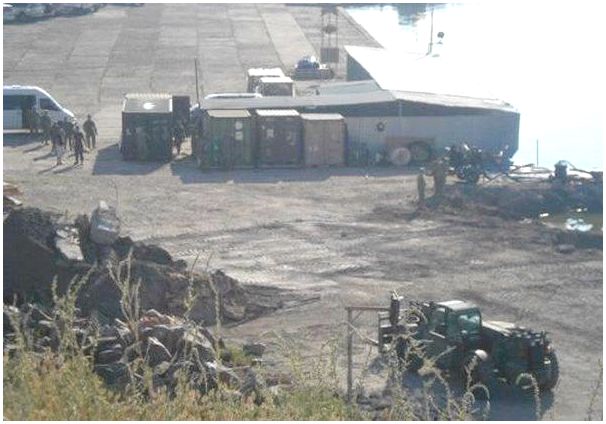 What happens at the port of Ochakov?

Ukrainian veterans were concerned by the fact that the Americans are building. According to them, every morning men in camouflage U.S. military brought two minibuses.

Thus, according to Dmitry Chalenko, one of the veterans of the Ukrainian army at a military port being built by the U.S. Corps of Engineers. But in itself the process is not so dangerous. The main thing is that they are built. And that, says Chalenko, neither more nor less than a berth for their boats, but not simple, and those that deal with transportation «sea lion». And if we talk about how this can be dangerous for Ukraine, it should be noted that in the immediate vicinity of the ports are Ochakov Kherson and Nikolayev and Odessa, Yuzhny, Illichivsk, Crimea …

As the chairman of the All-Ukrainian Union of Soviet officers in Ochakov Valery Bykov, has been delivered to all the necessary equipment and construction materials, imported machinery is very serious. Currently, the U.S. is engaged in carrying divers underwater exploration.

In addition, the well-known storage resource Youtube video posted video (see below), which proves that the construction of the port Ochakov really is, and they do it is the U.S. military.

Based on these data, a large number of online resources («International Russia», «Russian world. Ukraine» and others) have placed a request for information to Ukrainian President Viktor Yanukovych, sponsored by the Progressive Socialist Party leader Natalia Vitrenko.

In his letter Vitrenko requires Yanukovych explanation, what happens, and who gave the right to conduct such operations, as in the case of liquidation of such an object in the pathetic military confrontation, can be directly affected residents of our state.

It is clear that this situation has caused great excitement in the media. They asked for clarification on the matter by the Acting Mayor Ochakov Sergei Bychkov. He tried upokoit journalists, stressing that all the construction work is carried out in advance of the international exercise «Sea Breeze — 2012», and that at their end all constructed objects (namely, a special slip for landing craft, with which it will be possible to dive from the pier in water) will become the property of the country. He also noted that this structure has long been sought by local military unit, but that funds for its construction was not enough.

As noted by Andrew Ryzhenko, Deputy Chief of Staff of the Ukrainian Navy, those water networks, which are built by American and Ukrainian specialists in port Ochakov help to enhance counter-terrorism and piracy at sea. The city just posted unit Ukrainian Navy, whose main task is to carry the fight against the pirates. He also noted that the U.S. military helped buy Ukrainian military to perform its tasks speedboats. Now, in order to successfully use them, you need to spend additional equipment dock. The cost of it is about several million hryvnia, which is not in Ukraine. Therefore, at the level of top military and political leadership decided to implement the project with the Americans.

A. Ryzhenko also said that all the documents for the construction approved by the State Service expert control. All the required construction materials purchased in Ukraine. For his deep conviction that people should just be happy Ochakov that in their military unit will develop infrastructure, also not for the state budget.

Veterans of the armed forces agree — slip — this, of course, very good, if not one, but a very substantial «but» if you take into account that the U.S. engaged in the construction work of engineering, which are in a constant state of alert, according to the law military construction, they will have the means to provide a possible elimination of the object. And it is very near a fuel depot, torpedo base. You can imagine what could all end if the Americans pleases eliminate your object …

In this scenario, neither of which security can not speak, and if there is a real threat to life, and the image of the state is not important, because it just leveled in the eyes of the world community. So little cause for joy …

0
Like this post? Please share to your friends:
Related articles
Interesting 0
Society Former candidate for participation in the presidential election Sergey Ryzhov said that he
Interesting 0
Everything you need to know to start cranking out cash with your PC BY
Interesting 0
«… Air Force Commander Alexander Novikov reported that the two are ready to
Interesting 0
Above the summit crater of the volcano in Alaska Cleveland workers, local observatory
Interesting 0
December 1. Annual capacity is about 180,000 cubic meters of finished products used, including
Interesting 0
Disclose Truth TV introduced a new TV show with the participation of experts: Tarpeya
Categories
SQL - 49 | 0,163 сек. | 11.43 МБ