Subject of German prisoners of war for a very long time, the number was spicy and for ideological judgments covered with darkness. Most of it have been engaged in the German historians. In Germany, published the so called «A series of stories of war» («Reihe Kriegsgefangenenberichte»), published by the non-official at his own expense. Cooperative analysis of Russian and zabugornyh archival documents, conducted over the past decade, to shed light on many of the actions of those years.

GUPVI (General Administration of prisoners of war and internees of the USSR Ministry of Internal Affairs) has never led the individual account of war. On Fri army camps and in counting the number of people was raised very poor, and the movement of prisoners from camp to camp it difficult puzzle. It is clear that at the beginning of 1942 the number of German prisoners of war was only about 9,000 people. The first time, an unlimited number of Germans (over 100,000 soldiers and officers) were taken prisoner at the end of the Battle of Stalingrad. Remembering the atrocities of the Nazis, with them does not stand on ceremony. The large mass of naked, skinny and unhealthy people commit winter transitions on several 10 of kilometers a day, spent the night under the open sky and almost nothing to eat. All this has led to the fact that out of them alive at the end of the war there were less than 6,000 people. Altogether, according to official Russian statistics, captivity were taken 2,389,560 German soldiers died of their 356,678 people. But on the other (German) sources in Russian captivity was more than 3 million Germans, of whom one million prisoners died. 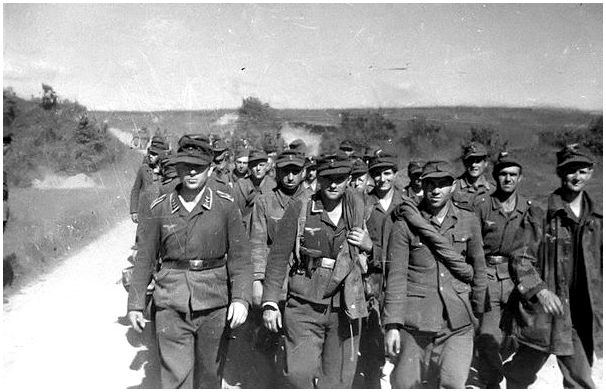 Russian Alliance was divided into 15 economic regions. In 12 of them on the basis of the Gulag were made hundreds of camps for prisoners of war. During the war, their situation was particularly weary. There were shortages of food, medical service remained at a low level due to the lack of trained doctors. An appliance in the camps was very unsatisfactory. Prisoners housed in unfinished spaces. Cold, cramped and gryazyuka were common occurrences. The mortality rate reached 70%. Exclusively in the post-war years, these numbers could drop. The rules established by the order of the NKVD of the USSR, for each prisoner of war, were supposed to fish 100 grams, 25 grams of meat and 700 grams of bread. In practice, where they occasionally observed. It was noted many atrocities security service, ranging from theft of merchandise and finishing non-extradition of water.

Herbert Bamberg German last soldier captured near Ulyanovsk, wrote in his memoirs: «In the camp, the prisoners were fed only once a day or a liter of soup ladle millet porridge and bread quarters. I agree that the community of Ulyanovsk, probably too starved. «

Any nationality in accordance with the traditions have their creative passions. To survive, the Germans organized theater groups, choirs, literary group. In the camps were allowed to read newspapers and play games neazartnye. Many prisoners were made chess, cigarette cases, boxes, toys and different furniture.

During the war, despite the twelve hour day, the work of the German prisoners of war did not play a large role in the economy of the USSR because of bad work organization. After the war, the Germans were involved in the restoration of destroyed during the war, factories, railways, dams and ports. They restored an old and built new houses in almost all Russian towns. For example, with the help of their main building was built in the Moscow State University. In Yekaterinburg, entire neighborhoods were built hands prisoners of war. Apart from this, they were used in the construction of roads in inaccessible places in the extraction of coal, iron ore and uranium. Increased attention was paid to highly spice in different areas of knowledge, medical sciences, engineering. As a result of their activities have been implemented many fundamental innovations.

Despite the fact that the Geneva Convention on Prisoners of War proclamation in 1864, Stalin did not recognize the Soviet Union there was an order to save the life of German fighter. There is no doubt the fact that they were treated more humanely than with the Russian people trapped in Germany.

Captivity for the Wehrmacht soldier brought great disappointment in the Nazi references, an old broken current position, brought the uncertainty of the future. Along with the fall of the actual level of this test was a strong man ‘personal properties. Not of strongest survive in body and spirit, and learned to walk on the corpses of others.

Henry Eyhenberg wrote: «In general, the problem of the stomach was more important of all, a bowl of soup or a slice of bread sold body and soul. Hunger spoiled people, corrupted and perverted them into animals. Ordinary steel stolen goods from their own comrades. «

Any unofficial affairs between the Russian people and the prisoners were seen as a betrayal. Russian propaganda for a long time and all the Germans stubbornly billed beasts in human form, producing them very aggressive attitude. 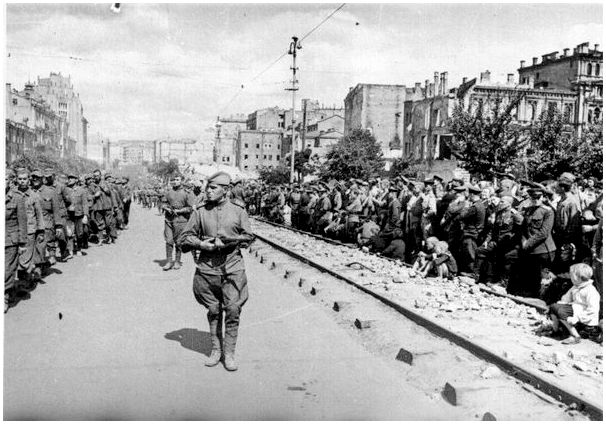 The column of German prisoners of war carried through the streets of Kiev. All along the way the column was being watched the residents and off-duty military personnel (right)According to the memoirs of the 1st prisoner of war: «During the work order in the same village, an old lady did not believe me that I Teuton. She said to me: «What are you German? You have the same no horns! «

Along with the soldiers and officers of the German army in captivity were also representatives of the army elite Third Reich — German generals. First 32 General, headed by the commander of the 2nd Army, Friedrich Paulus hit the captivity in the winter of 1942-1943 directly from Stalingrad. A total of 376 Russian prisoners visited by German generals, of which 277 have returned home, and 99 died (18 of them generals were hanged as war offenders). Attempts to escape in the middle of the generals were not available.

In 1943-1944, together with the Principal GUPVI Political Administration of the Red Army led by the hard work of creating anti-fascist organizations in the middl e of war. In June 1943, the State Committee was formed «Free Germany». 38 people entered his first composition. The absence of senior officers and generals has caused many German POWs doubt in prestige and importance of the organization. Soon the desire to join the SSS announced Major General Martin Lattmann (commander of the 389th Infantry Division) Gen.-Major Otto Korfes (Commander 295th Infantry Division) and Gen.-Lieutenant Alexander von Daniels (commander of 376th Infantry Division).

17 generals, led by Paulus wrote them an answer: «They want to launch an appeal to the German people and the German army, requiring the displacement of German control and the Hitler government. What makes the officers and generals belonging to the «Union» is treason. We deeply regret that they went this route. We no longer consider them my friends, and we strongly reject them. «

Zateyschik statements Paulus was placed on a special cottage in Dubrovo near Moscow, where undergone psychological treatment. Hoping that Paulus elect heroic death prisoner, Hitler promoted him to field marshal, and a third in February 1943 symbolically buried him as «the death of the fallen brave, coupled with the heroic soldiers of the 2nd Army.» Moscow, nevertheless, to attempt to connect to Paulus anti-fascist work. «Processing» conducted by a special general program there, Kruglov developed and approved by Beria. After year Paulus openly about the transition to the anti-Hitler coalition. The main role was played by all the victory of our army at the front and the «conspiracy of generals,» July 20, 1944, when Hitler luckily escaped death.

August 8, 1944, when Berlin was hanged each Paulus Gen.-Field Marshal von Witzleben, he openly declared on the radio «Freies Deutschland»: «Events shortly, made in Germany to continue the war equivalent stupid victim. For Germany, the war is lost. Germany must renounce Adolf Hitler and install the latest municipal authority, which will end the war and create the conditions for our people, life expectancy and the establishment of a peaceful, even friendly

The present-day relations with our enemies. «

Then Paulus wrote: «It became clear: Hitler not only could not win the war, and did not have to win it, it would be in the interest of mankind and in the interests of the German people.» 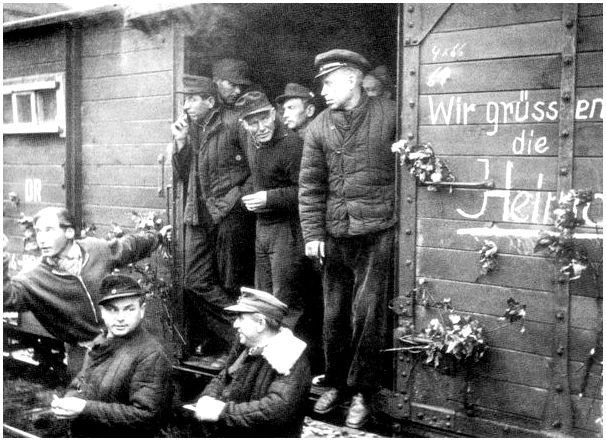 The return of German prisoners of war from Russian captivity. The Germans arrived at the border transit camp Friedland

Speech by Field Marshal received a wide response. Paulus family offered to renounce it publicly condemn this act and to change the name. When they flatly refused to do the requirements, the son of Alexander Paulus was imprisoned in the fortress-prison Kiistrin and wife Lena Constance Paulus — the concentration camp at Dachau. August 14, 1944 Paulus officially entered into CHO and began an active anti-Nazi activities. Contrary to the requests of his return to his home in the GDR, he was only at the end of 1953.

From 1945 to 1949, was returned to his homeland more than 1 million patients and disabled prisoners. In the late 40’s to release prisoners Germans did not, but many also gave 25 years in the camps, declaring their military offenders. The allies of the USSR government to explain this by the need of the upcoming reconstruction of damaged country. After a visit to our country’s Chancellor Adenauer of Germany in 1955 issued a decree «On the premature release and repatriation of German prisoners of war who have been convicted of war crimes.» After that, many Germans were able to return to the home for themselves.

0
Like this post? Please share to your friends:
Related articles
Interesting 0
Society Former candidate for participation in the presidential election Sergey Ryzhov said that he
Interesting 0
Everything you need to know to start cranking out cash with your PC BY
Interesting 0
«… Air Force Commander Alexander Novikov reported that the two are ready to
Interesting 0
Above the summit crater of the volcano in Alaska Cleveland workers, local observatory
Interesting 0
December 1. Annual capacity is about 180,000 cubic meters of finished products used, including
Interesting 0
Disclose Truth TV introduced a new TV show with the participation of experts: Tarpeya
Categories
SQL - 49 | 0,178 сек. | 11.46 МБ