This conclusion was reached by the researcher, editor, and producer Michael Tellinger, after studying the ancient ruins in southern Africa. Tellinger believes that the ancient city, consisting of many unusual buildings, linked to the lost civilization of ancient aliens from outer space — the Anunnaki. They arrived on Earth about 200,000 years ago to mine gold here.

The ruins, which he studied with another researcher Johan Heine, consist of thousands of stone structures on a very large area. The very sight of the structures shows that they belong to the ancient times, as evidenced by severe erosion and raids, said Tellinger.

One of the most important structures which he called «Calendar of Adam.» This monolithic stone calendar that can identify any day.

According to works by renowned researcher Zecharia Sitchin Sumerian civilization, which refers to Tellinger, the Anunnaki long tinkered with human genetics to create a job for himself in the mines.

Among the ruins, a group of hexagonal shape. It resembles a cell, which, in the opinion of the investigator, could be used as a reservoir. In addition, Tellinger suggested that many of the structures made of stone, containing quartz, were used as a source of energy for large settlements. By studying the area using aerial maps, Tellinger determined the location of three major cities, an area of about 60 x 60 km each. One of them includes the ruins of Great Zimbabwe.

Among the ruins, you can find the first pyramid, as well as details of the inscriptions carved on stone. Including the Ankh symbol, which indicates that it is used for thousands of years before the Egyptian civilization, said Tellinger. 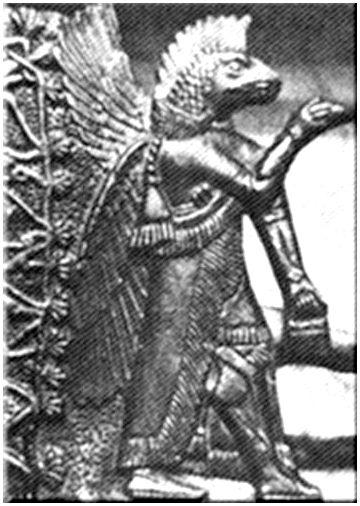 Michael Tellinger 30 years researched the origins of humankind and the genetic anomalies of the human species, which formed the basis of his work, entitled «Slave type of God.» Together with Johan Heine, in 2007, they began to study the ancient ruins in South Africa. The result had been written two books — «Adam’s Calendar» and «Temples of the African Gods.» The studies were made startling scientific conclusions that the remains of the ancient structures in southern Africa may belong to a vanished civilization Anunnaki allegedly visited Earth about 200,000 years ago.

The Anunnaki or Anunnaki (Etymology of the name is uncertain due to the presence of many forms of writing (a-nuna, a-nuna-ke-ne, a-nun-na), giving different reading «came from heaven,» «those of noble blood,» etc. ) — Enlil Ninlil, Enki — Sumerian, Akkadian, Assyrian and Babylonian deities known from the most ancient written sources. Related, and in some cases, overlap with Annwn (fifty great gods), and IGIGI (minor gods).

0
Like this post? Please share to your friends:
Related articles
Interesting 0
Society Former candidate for participation in the presidential election Sergey Ryzhov said that he
Interesting 0
Everything you need to know to start cranking out cash with your PC BY
Interesting 0
«… Air Force Commander Alexander Novikov reported that the two are ready to
Interesting 0
Above the summit crater of the volcano in Alaska Cleveland workers, local observatory
Interesting 0
December 1. Annual capacity is about 180,000 cubic meters of finished products used, including
Interesting 0
Disclose Truth TV introduced a new TV show with the participation of experts: Tarpeya
Categories
SQL - 56 | 0,219 сек. | 10.99 МБ