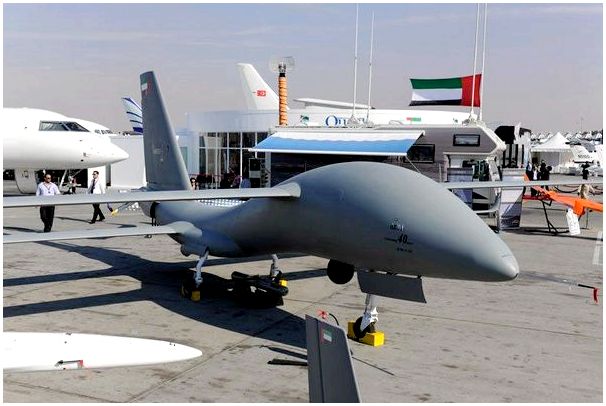 Perhaps more impressive was the new design of the latest unmanned aerial vehicles United 40, presented by the company Adcom Systems at the exhibition in Dubai. Based in Abu Dhabi, the company has captured a reputation for its Innovative approaches to the design of the UAV and aerial targets. United 40 did not disappoint their tandem wings and impressive S-shaped fuselage.

The concept of a tandem wing UAV, which was embodied in the United 40, held research and development for 4 years. In the formative years she was a working title of «X range», but later became known as the Shaheen (Shaheen). Not so long ago, it was given its new name in honor of the 40th anniversary of the creation of the United Arab Emirates.

Flight tests of scale models of the tandem wing design began about 2-years ago, the model increased in size and difficulty. When the final testing machine it was set in motion with 2 small engines located on the rear wing, which had a magnitude about 6 meters. Inspired by the fruits of these flight tests, Adcom now finishes the construction of a full-scale aircraft and wants to raise it in the air in the coming weeks.

Tandem wing was chosen for several reasons. The most important thing is that more acceptable from the standpoint of restrictions on the location of the center of mass design while at the same time reduces the occupied area on the ground. Changing the angle of attack of the wing front can make a better pitch control and trim. Wings themselves provide the very highest lift force, and as a result, achieved extraordinary glide ratio of 1:43. The wingspan is 17.5 meters (57 feet 6 inches), and the lifting wing area 24.3 square meters (262 square feet).

As expected based on data from large-scale trials will be a good climb. Takeoff / landing speed may be lower than 14.8 meters per second (33 miles / h) and the expected ceiling UAV over 7 km (23,000 ft). The biggest take-off weight of about a ton (2,205 pounds), carrying with it all to 800 liters. (211 U.S. gallons) of fuel, including 240 liters. Located in the wings. The required load can be placed under the fuselage, in the inner compartment or on the 4 external hardpoints on the rear wing.

Another unusual feature of the United 40 is its hybrid propulsion system. It contains the main 120-horsepower engine Rotax 914UL, driving a pusher tail rotor, and completed 80-horsepower electric motor, mounted in the nose for takeoff and climb.

On the show, along with the very UAV United 40 was presented as a new tool, designed for use with UAV. The guided missile Yabhon-Namrod was developed by Adcom for accommodation in the inner compartment on the rotary launcher turret type 8 guided missiles. The missile has a direct folding wing, unfolding at startup, and a small jet engine that provides weapons speed of about 230 m / s within a radius of 60 km.

Yabhon-Namrod weighs around 30 pounds. The warhead was based on a standard 100-mm artillery shells. It may be used various methods for targeting, including infrared and laser, and GPS / inertial.

0
Like this post? Please share to your friends:
Related articles
Interesting 0
Society Former candidate for participation in the presidential election Sergey Ryzhov said that he
Interesting 0
Everything you need to know to start cranking out cash with your PC BY
Interesting 0
«… Air Force Commander Alexander Novikov reported that the two are ready to
Interesting 0
Above the summit crater of the volcano in Alaska Cleveland workers, local observatory
Interesting 0
December 1. Annual capacity is about 180,000 cubic meters of finished products used, including
Interesting 0
Disclose Truth TV introduced a new TV show with the participation of experts: Tarpeya
Categories
SQL - 47 | 0,331 сек. | 10.87 МБ