The Russian company «Glon» has developed a navigation system Wayray, projecting the route on a car windshield. If the commercial launch of the product is successful, about $ 100 million for its further development is prepared to allocate Benchmark Capital — Investor Twitter, eBay and RedHat. Sales are scheduled to begin in late 2012. 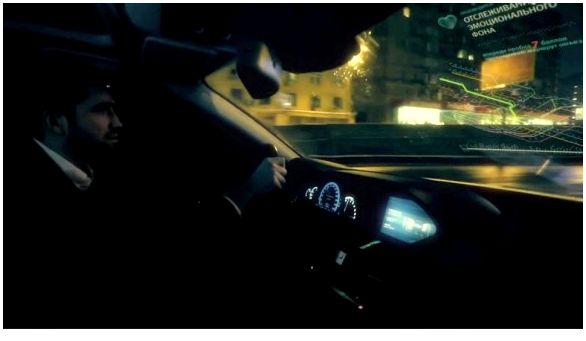 A prototype system was demonstrated for the first time this week.

Wayray projected onto the windshield of his car route traffic, shown as a line, repeating the motion path. The driver gets the impression that the image is applied directly onto the road. The projection uses more than 70% of the windscreen and arranged in such a way that the image is focused to infinity, so that the driver does not have to constantly be distracted from the road.

The company say that the tracking coordinate system is used in the auto-board equipment with dual-system GLONASS / GPS, developed by KB «Compass» (specializes in the production of on-board equipment for the Russian military air and space forces), as well as maps of «one of the known suppliers «, whose name in the» Glon «do not open.

«Picture» on the windshield is created using two projectors and polarized light polarizing film, which is glued to the windshield, says founder and CEO of Project Vitaly Ponomarev. In the future, instead of the film is planned to use nano-coating.

According to the head of the project at the initial stage, the company will sell the system as «packaged» solution, but in the plans — negotiations with auto manufacturers, whose production is localized in Russia, about the possibility of pre-Wayray as an option at the factory.

Wayray pre-order for everyone to be opened in September 2012, said Ponomarev. The cost of the basic set, he said, will be about 15-17 thousand rubles., And using more expensive materials — about 25-30 thousand rubles.

An important feature of their system in the «Glon» refers to the integration of its social and geo-location services. As planned by the developers of the system must interface with the infrastructure of the city and facing the display, for example, information about the surrounding buildings. In addition, through a system the driver is able to interact with other members of the movement. According to Ponomarev, in the long term on the basis of Wayray company wants to create a whole virtual space of the Internet, combined with the real world.

The company was founded in 2011 in the work on the project involved about 30 people. According to Ponomarev, in addition to his owners’ Glon «is still a few individuals, whose names he prefers not to elaborate. General Director of «Glon» also told CNews, that his company has already held talks with one of the world’s largest investment funds — Benchmark Capital — to attract about $ 100 million over three years to develop the project.

«Agreement on Investment from Benchmark Capital has yet been signed, but he is very interested in our development, — Ponomarev said. — A key condition for receipt of funds from the fund, perhaps, be called a successful commercial launch of the project. » Recall that the portfolio Benchmark Capital has more than 150 projects, including — Twitter, eBay, Dropbox and RedHat. The company also expects to become a resident of the «Skolkovo».

Talking about myself, Ponomarev said that for 24 years and he trained as a financier (he graduated from the Academy of National Economy), but always keen on technology. Now, in addition to the main project, he engaged in «scientific research» in the field of artificial intelligence.

It is worth noting that in July in Japan due to go on sale in navigation system with augmented reality, developed by Pioneer. It comes with a special semi-transparent display of MicroVision, securing the front of the windshield, on which the laser in real time projected GPS-tracks and other information.

In addition to the navigation on the windshield, you can project the image from a DVD and TV while using a camera mounted on the front of the car, Cyber Navi can also track the location of vehicles and the distance to the car in front of him. The initial cost of such a system, according to foreign media reports, over $ 3 million

In 2010, a prototype of the windshield with a display of augmented reality as demonstrated avtostroitelnaya American corporation General Motors. As planned by the developers of the system must be not only navigation, but also entertainment features.

0
Like this post? Please share to your friends:
Related articles
Interesting 0
Society Former candidate for participation in the presidential election Sergey Ryzhov said that he
Interesting 0
Everything you need to know to start cranking out cash with your PC BY
Interesting 0
«… Air Force Commander Alexander Novikov reported that the two are ready to
Interesting 0
Above the summit crater of the volcano in Alaska Cleveland workers, local observatory
Interesting 0
December 1. Annual capacity is about 180,000 cubic meters of finished products used, including
Interesting 0
Disclose Truth TV introduced a new TV show with the participation of experts: Tarpeya
Categories
SQL - 50 | 0,283 сек. | 11.46 МБ