The idea of creating a new anti-tank weapon belongs to the engineer G.Donneru. Feature of the new tool — placing the barrel in terms of wheel travel. This sets a good stability of the gun shot and the production is quite small silhouette than the low visibility was achieved on the battlefield. Start of development of the project — spring 1942. Managing work — Engineer E. Fabricius. Newcomer gun give the title PstK 57/76.

By developing a new gun ammo. It is made on the basis of 57mm shells from the shore Hotchkiss guns «57/58 H», which is placed in a pocket 76mm projectile from the divisional guns «76 K/02». According to the calculations, the initial speed of the new weapon was to be 1000 m / s, but the tests showed even a huge projectile velocity of 1100 m / s.

First test the most experienced of the new standard anti-tank guns begin in the middle of 1943. By year end, the main work on the experimental prototype came to an end, began to plan for mass production of guns in the amount of 200 copies. But the military shall be removed from the 57mm guns and claimed tool 75mm caliber. The premise of this decision was the German 75mm anti-tank gun caliber (75 K/40), which was acquired in Germany and taken into service. To unify the guns ammunition and took tool specifically caliber 75mm. 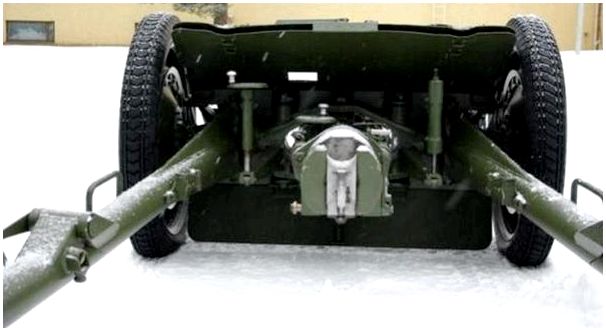 In a few months the project antitank gun was amended and approved for construction. The new gun caliber 75mm working title is «75 K/44». The Finnish Defense Ministry issued ahead even order for a series of 150 copies.

Major changes have touched the barrel — its length is increased and amounted to 55 calibers. It gave up the growth rate of German manufacture ammunition against German «PAK-40″:

75 K/44 equipped with a muzzle brake on its development, gate-type automatic and enhanced protection (dual shield). Combat weight of 75 K/44 not exceed one and a half tons, the transportation is performed by analogy with the German «PAK-40″, weight of both guns actually similar. Finnish designers have also made new Subcaliber ammunition for the gun instead of the latest German «Pzgr.40», but mass-produce them and could not — tungsten cores are used in the sub-caliber ammunition, let the Finns did not.

Tests of a converted anti-tank weapon at a larger caliber began in the first days of spring 1943. During the tests revealed a huge problem with the reliability of the gun. By the summer of 1944 work began on the creation of tools to carry out in emergency mode — this time the Russian forces launched a large coming in to remove the threat of Karelia and Leningrad withdrawal from the war in Finland.

Follow-up tests are held at the end of July 1944. Experienced model showed the best armor, but decide prepyadstviya with its reliability and failed. The military immediately claimed result, what was required to enter the configuration design itself anti-tank weapon. Another factor is the small profile guns — Finnish governmental he is not completely satisfied, because the difficulties of cross-country showed up (maybe because of the uneven terrain gun was poorly adapted to fire point-blank range during transportation or as a tool behave unpredictably).

Reason to bring a gun to Finnish engineers have not been able — in September Finland signed a peace treaty with the Soviet Union. After that, the creation of instruments of war have become a matter of serious doubt — 75 K/44 showed no advantage over German «PAK-40.» Effectiveness against the latest models of tanks at the time also been called into question.

According to the agreements signed the armistice, the instrument became part of the weapons and equipment transferred to Russian Union. But the 75 K/44 not intrigued by Russian military and instrument designers and returned Finns. The development of advanced tools small rate, it is clear that in the 50 years of its somewhat improved. Of the main innovations is necessary to note the substitution recuperator — instead of hydro-pneumatic spring set.

In the middle of the 50s anti- tool was registered in the Finnish arms company «Tampella» as «75mm anti-tank tool mod. 46. » One of the prototypes were sent to Israel to carry out tests for a possible subsequent export production. The Israelis did not order this gun for the army, and the tool (model) and remained among the Israelites. Another layout was used in the middle of the 60’s as a scale model (1:2) for the creation of the then Finnish 155mm howitzer guns 155K83. Layout tools given to the museum.

The Finns before 1936 were armed with 44 guns «75 VK/98» Japanese production made on a similar design (barrel at the wheel axle), later sold to Spain (the majority).

0
Like this post? Please share to your friends:
Related articles
Interesting 0
Society Former candidate for participation in the presidential election Sergey Ryzhov said that he
Interesting 0
Everything you need to know to start cranking out cash with your PC BY
Interesting 0
«… Air Force Commander Alexander Novikov reported that the two are ready to
Interesting 0
Above the summit crater of the volcano in Alaska Cleveland workers, local observatory
Interesting 0
December 1. Annual capacity is about 180,000 cubic meters of finished products used, including
Interesting 0
Disclose Truth TV introduced a new TV show with the participation of experts: Tarpeya
Categories
SQL - 51 | 0,422 сек. | 11.5 МБ