First, the 50s in the «Department 520» UTZ (Ural tank factory), in the framework of the creation of a fundamentally new tank began to design medium tank «Object 140.» The work was headed by Chief Designer Morozov. Due to the differences between the plant and the Directorate engineers design bureau, in 1952, some designers (in the set which was itself Morozov) defected to the Kharkov factory number 75. Work on the tank «Object 140» continued LN Karz. Some development and solutions for «Object 140» were used in the design of the tank «Object 430». Two experienced reference was made in 1957. During the comparative tests of tanks «Object 430» and «Object 140» at last revealed some shortcomings. Soon the initiative Kartseva tank «Object 140» was removed from the competition, and the work done on it. 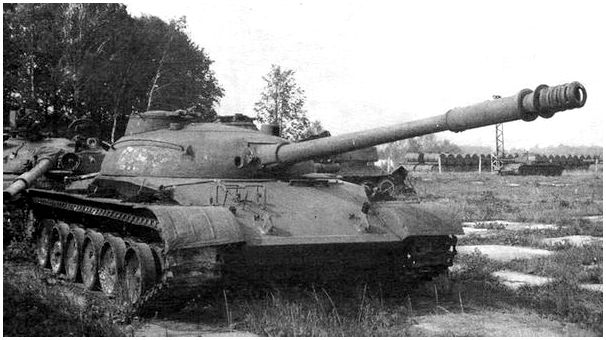 In May of ’57 for industrial trials have collected the first model of the tank «Object 140». Since the beginning of the most experienced test standard was 86 km, but the tests had to cut short because there was an increase in temperature of the box and the motor. In addition to switching the 3rd to 4th gear has also been unsatisfactory. With the machine removed the cooling system, a box, and final drives. All the units are installed on the shield to reduce thermal properties, to work out the synchronizers also eliminate other defects. For the cooling system made the new ejector. When testing the latest industrial chassis mounted on the working model (in the chassis were used rollers from duralumin alloys) also revealed shortcomings — rubber tires rapidly destroyed. Total built two prototype standard «Object 140». During the comparative tests in Kubinka landfill NIIBT with the Kharkov tank «Object 430» revealed serious flaws in the design of the box and the motor «Object 140». For example, the placement of the motor housing made it difficult to cross in an inclined position to access it during the repair and maintenance of army, also promoted structural modifications for installation.

06.06.1958 by the Decree of the USSR № 609-294 of the tank «Object 140» were officially terminated. The annex to the decision as a prerequisite for termination of the work states: «Due to the fact that the new middle tank developed by the number 183 on its own construction of the least efficient than a new medium tank, developed in parallel in the factory number 75 of Kharkiv National Economic Council. » The sole surviving copy of the most experienced tank «Object 140» was in Kubinka and was exhibited in the Military Historical Museum of armored vehicles. In the summer of 2006 tank was transferred to Nizhny Tagil Museum of FSUE «Uralvagonzavod». 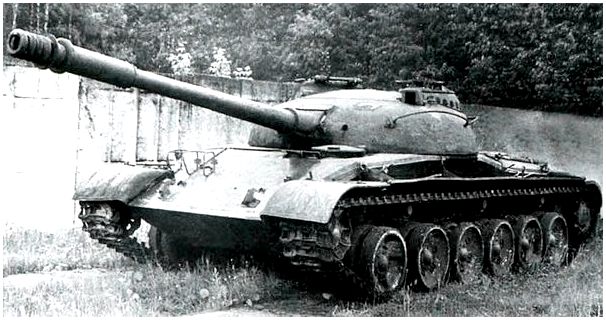 In the experimental tank «Object 140» was implemented traditional scheme of general assembly with an unusual arrangement of the motor — in a tilted position across the body. Management office was located on the left in the bow of the hull. It was a driver. Over his working place in the roof hatch body was that of armor locked lid. To monitor the battlefield while driving with closed hatches used two periscope observation devices installed in mines near the top of the windshield of the top sheet. To provide wide angle before the tank device is installed at an angle relative to each other, with an offset to the right. When driving a tank in the black hours a day instead of the left prism viewing device installed night vision device TVN-2. The special features of the assembly’s compartment may include placement on the left-facing panel of monitors and installing the seat in front of the driver’s shift lever. The fighting compartment was in the tower and the middle part of the body. Workplace gunner was left of the gun. For the gunner was a tank commander. Workplace charging — right from the gun. The fighting compartment of the tank «Object 140» in comparison with the T-54 was increased due to the larger diameter of the support of the tower, which was 2230 mm (for the T-54 is equal to the diameter of 1816 mm).

As a weapon on a tank «Object 140» were installed stabilized gun and three machine guns. The main instrument was a 100-mm rifled gun D-54TS has slotted muzzle brake, an ejection device purge the barrel and mechanism eject spent cartridges. The armor-piercing projectile was fired at an initial speed of 1015 m / s. With the instrument was paired 7.62-mm gun. Aggressive exchange machine gun mounted to the left of the workplace of the driver’s compartment. On the first swatch experimental tank «Object 140» during the shooting of guns point-blank range, and from coaxial machine gun used periscope sight T2SA «hits» made by the Krasnogorsk plant number 393, on the second — articulated telescopic sight TSH-2-32P. gun and coaxial machine gun had a plane stabilizer. On the first swatch tank installed stabilizer «Lightning», the second — «Blizzard». These stabilizers are the work of CRI-173. For firing at air targets was used gun KPVT 14.5mm. Anti-aircraft machine gun system was manually operated and located on the grounds of the charging flap. Ammunition for the gun consisted of 50 unitary shots to the 7.62-mm machine guns from three thousand rounds of ammunition, a gun mnogokalibernomu of 500 rounds.

The tank «Object 140» was set differentiated protivosnaryadnaya armor protection. Ship hull plates (welded from individual bronelistov) — bent with variable width (bottom of 80 mm at the top — 57 mm). The bow of the hull was made of 2-100-mm armor plates. Side and top sheets up front were so makarom that created a support tower defense. Aft of the case was a cast insert, which consisted of upper and lower bronedetaley at an angle. The roof of the body creating a horizontal sheet, front and rear cheek plates were located under bolshennymi angles. To access the components and assemblies boxes and power plant on the roof of the housing of the engine compartment disclosed hinged back. A special torsion facilitates lifting the roof crew. Cast spherical tower had a narrow recess for the gun. Maximum thickness of the frontal armor of the tower — 240 mm, board — 220 mm. The roof of the tower in the rear of the hatch ha d, through which the ejection of spent cartridges. Left tower mounted on the roof cupola having the same construction as the cupola at the T-54. Right on the roof of the tower — bottom flap loader. Loader’s hatch cover and anti-aircraft machine gun turret spun on a ball bearing.

The base powerplant was a 12-cylinder four-stroke diesel TD-12 (8D12U) liquid cooling plant design number 77. To reduce the height of the hull, 580-horsepower engine was installed at an angle of 53 ° with an inclination towards the bow of the tank. The internal fuel tanks have capacity 825 liters, External — 275 liters. The box provides 6-speed front and one transmission reverse. The scope box was equal 6.92. Rotation mechanism with two-stage planetary disc brakes and turn locking clutch. PMP and a box that had a thick build, structurally produced in different crankcases, but had a uniform system of cooling and lubrication. Such as. solution in the presence of friction parts that work in the oil, it has become a prerequisite for excessive loss of engine power to the nodes of the box, ie to the low efficiency of the box, as well as it should, to the highest heat loss into the oil. Oil-water radiator applied in the cooling system of the box, turned out to be ineffective.

The performance properties of the tank «Object 140»: 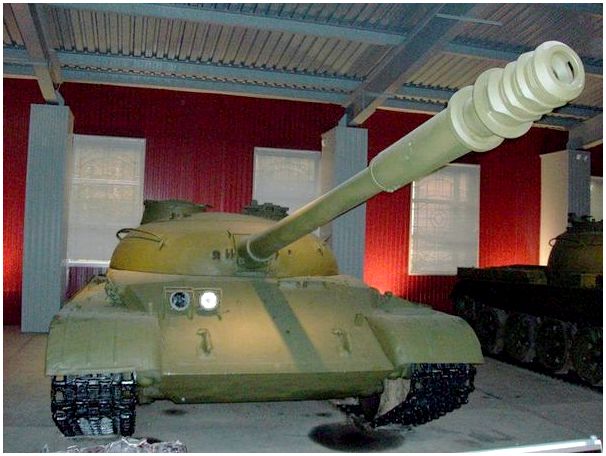 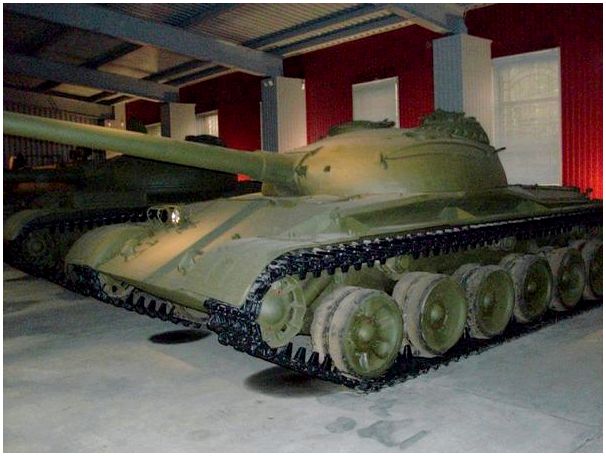 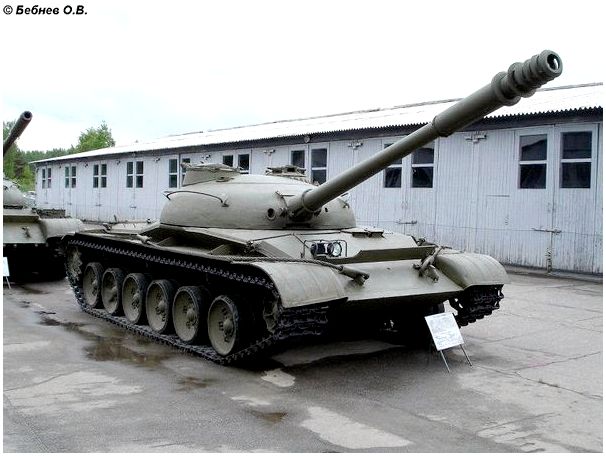 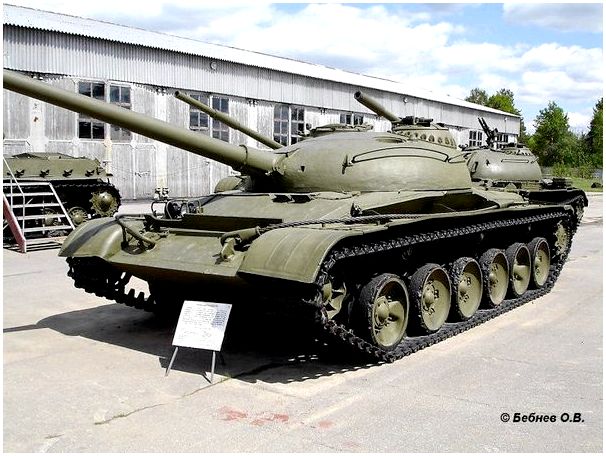 0
Like this post? Please share to your friends:
Related articles
Interesting 0
Society Former candidate for participation in the presidential election Sergey Ryzhov said that he
Interesting 0
Everything you need to know to start cranking out cash with your PC BY
Interesting 0
«… Air Force Commander Alexander Novikov reported that the two are ready to
Interesting 0
Above the summit crater of the volcano in Alaska Cleveland workers, local observatory
Interesting 0
December 1. Annual capacity is about 180,000 cubic meters of finished products used, including
Interesting 0
Disclose Truth TV introduced a new TV show with the participation of experts: Tarpeya
Categories
SQL - 49 | 0,173 сек. | 11.47 МБ