B-58 Hustler (Hustler — hustler, dodger) — first in the world far bomber capable of flying at supersonic speeds. Was in the U.S. Air Force in 1960. At the time of the creation of its own maximum speed bomber (M = 2) corresponded to the most rapid rate of its own fighters period. At the same time, due to a number of existing shortcomings of its operation was comparable to a brief but bomber still managed to occupy a notable place in the history of Bomber Command. From 1956 to 1962 year in the U.S. were produced 116 aircraft of this type.

In March 1949, a group of aviation research and development of the United States Air Force (ARDC) has issued requirements for the development of a supersonic bomber distant. Designing modern cars took 2nd recognizable companies: Boeing and Convair, which are the major aircraft manufacturers for the needs of the U.S. Air Force. The intended target was quite difficult. Only in 1951, the company managed to complete the testing of its own technical projects. February 1, 1952 the customer sent in a collection of refined performance characteristics imposed on the newcomer distant supersonic bombers. Based on the requirements of documentation needed to create and build bomber, able to fly in all weather conditions in small and huge heights at a rate that would exceed the speed of sound. Flight range of the aircraft was determined to be 4 thousand nautical miles, bomb load — 5 tons. In addition to this, the new bomber was to be a multi-purpose machine. On the creation of the first aircraft was given less than 5 years.

Taking into account these suggestions, engineers 2-companies have finalized their projects XB-58 and XB-59 and submitted them to the contest. Comparison of 2-presented aircraft engaged in the research center of the Air Force. In the end, the winner was conducted by comparing the plane produced by Convair. December 10, 1952 the aircraft received the official designation of the B-58, the same year the company Convair managed to get an order to produce 18 of these vehicles.

B-58 bomber was made on a «tailless» and had sredneraspolozhennym delta wing, with enormous sweep angles. The form of the aircraft fuselage was chosen taking into account the rules of space. About 15% of the aircraft was covered by a shell of stainless steel, which is a very good heat prevented the bomber. Under the plane of each wing at one pylon 2 was suspended motor J57-P-15. But this arrangement was short-lived power plant. Soon it was found that because of the danger of overheating the bottom surface of the wing in ground Position internal engines, there is a real danger of ignition of fuel in aircraft wing tanks. Pretty quickly, it was decided to install TRD on personal pylons. By plane B-58 applied fairly unusual main landing gear, which had 4 pairs of wheels on each leg. The height of the landing gear was several meters, which was justified in the presence of a fairly large bombers landing angle, and the requirement to ensure the free suspension arms, because the plane did not have its own bomb bay.

The crew of a bomber far radius acts B-58 consisted of three people — a pilot, navigator-bombardier, radio operator-operator defensive systems. Initially, they were located in separate booths filled with an ejection seat, but then they are positioned in a single sealed compartment. Each of the 3 jobs had personal opaque flap, which disclosed through the use of hydraulics. Bays operator and navigator had over 2 malehankih rectangular windows in the sides, which were made in order to allow the crew did not feel claustrophobic. But, according to the pilots themselves, the time for such nonsense, as in general, and to rest during the flight with them just did not have: the equipment bomber sought to discover constant attention from the crew.

B-58 was the first production supersonic bombers in aviation history, and therefore contain a huge number of innovations. Its creation was an attempt to turn back the ingrained tendency in those years, which led to an increase in the mass of aircraft to perform the required tasks. Relatively small size of the bombers were doing it longer enough inconspicuous — his EPR — effective dissipation surface (the most significant characteristics of the detection of the aircraft radar) ranged from 1/10 to 1/30 of the EPR bombers B-52 regardless of the angle in space. 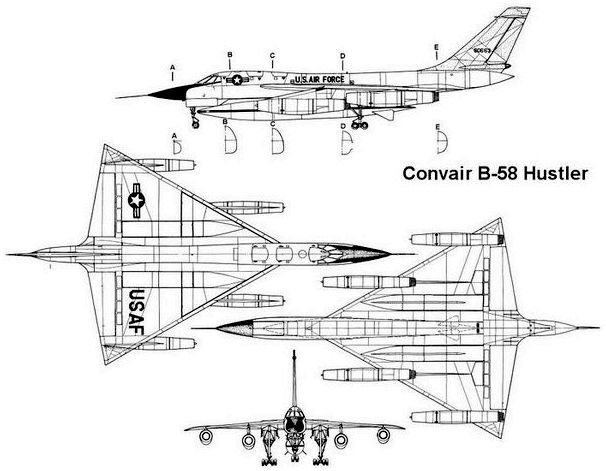 The design of the bombers are more complex and new. The body and wing were only a whole: fuselage frames smoothly moved into the wing spars. During a long flight at supersonic speed on the plane except high pressure air are acoustic and thermal loads. In order to provide an acceptable hardness and strength of the design of the wing was done, nothing less than 33-side member. With all of this step between elements of the typical «skeleton» was equated only 280-330 mm. The leading edge of the wing had a 60-degree sweep. She was perfectly worked out at the last of Convair aircraft.

Almost wing «Hustler» was a wing an F-102, which was proportionally increased. With all of this because of the small thickness compared airfoil pylon mount engines, assembly of power units and landing gear was the problem of severe. Go with this wing bombers had landing mechanization. To increase stamina and improve certain things about it on the huge angle of attack that characterized all aircraft «tailless» during the approach, the leading edge of the wing was made with a twist.

Approximately 80% of all aircraft skin panel formed from glued laminate 2 duralumin sheets having a thickness of 0.25 to 1 mm. Which had a layer of porous filler. In areas that have been exposed to more heat, «cell» were made of duralumin, and in other places — made of fiberglass, which also had the highest coefficient of thermal insulation. The panels are assembled using rubber-phenolic and epoxy-phenolic adhesives, molding used for their very expensive new technology. Bomber B-58 Hustler had very frequent and massive power set, which looked like a ship. Boarding was attached to the «skeleton» of the aircraft with the help of titanium and iron rivets, which provide the required for supersonic flight hardness and smoothness of the outer surfaces. It should be noted that much of the work done by the designers gave their fruits glider «Hustler» has left a record (even today) light with the highest level of rigidity. 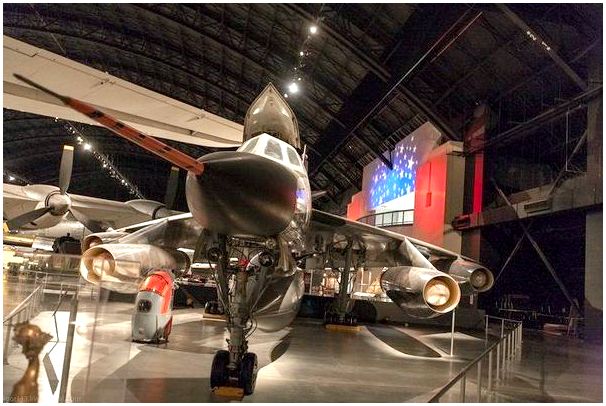 B-58 bomber is virtually always used with an external suspension under the fuselage. In this case, the aircraft could be used: MC-1C — a guided missile, curb inertial guidance system and a liquid engine. The missile could be equipped with a charge or a warhead of ordinary explosives or nuclear warhead. Range rocket launch MC-1C directly dependent on the height of the flight (should be between 10,668 to 18,288 feet at the time of separation f rom the aircraft SD) and ranged from 16 to 257 km. For launching such missiles crew had to raise the bomber to a great height, where he became a good target for enemy air defense systems. MB-1C — svobodnopadayuschih bomb or a ballast to improve the flight characteristics of aircraft. Usually used in the first years of operation of the B-58.

Also plane could use TCP — «two-component container.» One of its parts has been filled with fuel, and the other contained the bomb Mk53. There were 2 types of data containers: BLU2/B1 and BLU2/B2, which differed among themselves in size and weight. In addition to that, the plane could be a carrier of 4 nuclear bombs Mk43, relating to the megaton range. Just «Hustler» could carry a container with reconnaissance equipment — MC-1. For the defense trailing hemispheres airplane on it in the rear fuselage was mounted 6-svtolnaya 20 M61 Vulcan cannon with remote control. In addition bomber equipped with means of electronic countermeasures guided weapons of the enemy. All management functions defensive weapons systems operator, the operator did.

Because of the complexities of operating a bomber pilots, ground personnel also placed very high demands. Phalanx pilots were picked up only by personal advice Wing commander and had to possess a touch more than 1,000 hours in jet aircraft. With all of this half of the raid was to occur in the flight as commander of the crew of multi-engine jet aircraft. In addition, due to the shortcomings of free space in the cockpit, the pilots had to meet the same requirements on weight and height. Ground staff to service the B-58 Hustler and was selected from among only a very high-class professionals.

During the entire period of production was 116 aircraft B-58, are in combat units in operation until the end of 1969. It should be noted that the pilots of these aircraft are not particularly fond of. During the operation for various reasons lost 26 cars (22.4% of all issued), which is quite a huge indicator of losses in times of peace. One of the bombers crashed in 1961 during the execution of the demo flight at the Paris Air Show. Despite the fact that in the course of its operation were working to constantly upgrade equipment and systems, the machine is rapidly becoming obsolete and, in the end, was withdrawn from the U.S. Air Force and put into storage.

Flight and technical properties of the B-58:

0
Like this post? Please share to your friends:
Related articles
Interesting 0
Society Former candidate for participation in the presidential election Sergey Ryzhov said that he
Interesting 0
Everything you need to know to start cranking out cash with your PC BY
Interesting 0
«… Air Force Commander Alexander Novikov reported that the two are ready to
Interesting 0
Above the summit crater of the volcano in Alaska Cleveland workers, local observatory
Interesting 0
December 1. Annual capacity is about 180,000 cubic meters of finished products used, including
Interesting 0
Disclose Truth TV introduced a new TV show with the participation of experts: Tarpeya
Categories
SQL - 47 | 0,348 сек. | 10.91 МБ