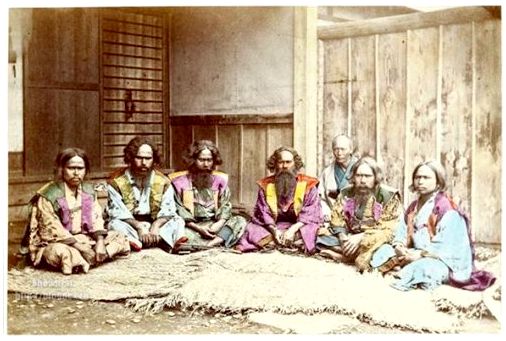 The belief in friendship and generosity, selflessness, honesty — their usual quality.

They are truthful and do not tolerate cheating «

Hokkaido and northern islands belong to all of the Ainu, wrote in 1646 navigator Kolobov, the first of the Russian, who visited there.

Indigenous people were Ainu of Japan, which appeared on the islands about 13 thousand years ago.

In the IV-I centuries BC to invade the land of the Ainu were migrants — tribes have rushed this time of the Korean Peninsula in the east, which later was to become the foundation of the Japanese nation.

For many centuries the Ainu fiercely resisted the onslaught and, at times, very successfully. Approximately in VII. BC for several centuries, established the boundary between the two nations. On this border line was not only military battle. There was a trade, was conducted intensive cultural exchange. Sometimes, well-born Ainu influenced the policy of Japanese feudal lords …

Japanese culture is greatly enriched by its northern rival. Traditional Japanese religion — Shinto — reveals the obvious Ainu roots; Ainu origin of the ritual of seppuku and complex valor «bushido.» The representatives of the privileged class of samurai in Japan are actually descendants of the Ainu (and we all show samurai exclusively Mongoloid type.

It is not surprising that the most widely received in the Japanese swastika heraldry. Its image is a monomial (the emblem) of many samurai families — Tsugaru, Hatisuka, Hasekura and others.

However, the Ainu suffered a terrible fate. Since the XVII century, they were subjected to ruthless genocide and forced assimilation, and soon became a minority in Japan. In today’s world there are only 30,000 Ainu.

«… The Conquest of Honshu huge progress was slow. In the beginning of the VIII century BC Ainu retains all of its northern part. The fortunes of war passed from hand to hand. Then the Japanese began to bribe the leaders of the Ainu, the court award them titles to relocate entire villages Ainu from the occupied territories to the south, and on the empty place to create their settlement. Moreover, seeing that the army is unable to hold the captured ground, the Japanese rulers have decided on a very risky move: armed goes north immigrants. It was the beginning of the service nobility Japan — samurai turn the tide of the war and had a tremendous impact on the history of his country. However, the XVIII century still finds in northern Honshu small villages completely assimilated by the Ainu. The majority of the part of the indigenous islanders were killed and another part had earlier cross the Tsugaru Strait to their own people in Hokkaido — the second largest, northernmost and most sparsely populated island of Japan today.

Until the end of XVIII century, Hokkaido (at that time it was called Ezo, Ezo or that is «wild», «land of the barbarians») are not too interested in the Japanese rulers. Written in the early XVIII century «Daynniponsi» («History of the Great Japan»), consisting of 397 volumes, mentions of Ezo in the section devoted to foreign countries. Although in the middle of the XV century, the daimyo (feudal lord large) Nobuhiro Takeda decided at your own risk oust the Ainu of Hokkaido and the southern built there the first permanent settlement of the Japanese. Since then, foreigners are sometimes called the island of Ezo differently: Matmay (Mats-May) named based Nobuhiro Matsumaeskogo clan.

New land had to be taken to fight. Aina offered stubborn resistance. Folk memory preserved the names of the most courageous defenders of the native land. One of these heroes Syakusyain, who led the revolt of the Ainu in August 1669. The old chief led the way for a few Ainu tribes. In one night, 30 were captured coming from Honshu merchant ships, then fell on the river fortress Kun-nui-gawa. Supporters home Matsumae barely had time to hide in a fortified town. A little more …

But the besieged sent reinforcements had time to time. Former owners of the island retreated behind Kung nui-gawa. The decisive battle began at 6:00 in the morning. Clad in armor Japanese soldiers with a smile looking at the running to attack a crowd of untrained regular ranks of hunters. Once these screaming bearded men in armor and hats made of wooden plates were a formidable force. Now anyone scare shine tips copies? Falls on the decline of arrows answered gun …

Surviving Ainu fled to the mountains. Another month continued the fight. Having decided to hasten the event, the Japanese lured Syakusyaina Ainu, along with other military leaders for talks and killed. Resistance was broken. Of free people, living on their own customs and laws, all of them, great and small, have become forced laborers Matsumae clan. Steady at the time, the relationship between the winners and losers are described in the diary traveler Yokoi:

«… The translators and supervisors made a lot of bad and vile deeds: they were ill-treated with the elderly and children, raped women.

Therefore, many Ainu fled to his tribesmen to Sakhalin, the southern and the northern Kuril Islands. There, they felt relatively safe — because the Japanese are still not there. An indirect confirmation of this is found in the first known historians describing the Kuril Islands. The author of this document — the Cossack Ivan Kozyrevsky. He visited in 1711 and 1713 in the north of the ridge and questioned her about the inhabitants of the entire chain of islands, up to Matmaya (Hokkaido). On this island Russian first landed in 1739. The people who lived there told the Ainu leader of the expedition Martyn Shpanberg that the Kuril Islands, «… a lot of people, and anyone not subject to those islands.»

In 1777, Irkutsk merchant Dmitry Shabalin could lead to Russian citizenship and a half thousand Ainu Iturup, Kunashir, and even in Hokkaido. The Ainu have received from Russian firm fishing tackle, iron, cattle, and over time — and the rent for the right to hunt near their shores.

Despite the arbitrariness of some merchants and Cossacks, the Ainu (including edzoskie) looking at the Russian defense against the Japanese. Perhaps eyed bearded Ainu saw people who came to them natural allies, so sharply different from those of living around the Mongoloid tribes and peoples. After all resemblance of our explorers and the Ainu was just amazing. It even fooled the Japanese. In their first reports Russian referred to as «red Ainu» … «

April 30, 1779 Catherine II issued a decree «On resorting to levying any taxes from the given citizenship in the Ainu», in which he said: «There is no collection with them not to demand, and to continue living by the customs of the peoples are not coerce, but try friendly and gentle manners to tea use in crafts and trade continue institutions already familiar with them. «

In 1785, up to the northern islands of the Japanese Ainu arrived and began to exterminate them. Residents banned trade with the Russian and destroyed the crosses and other signs indicating the ownership of the islands to Russia.

The Ainu were actually here as slaves. In the Japanese system of «correcting morals» complete lack of rights of the Ainu was combined with the constant humiliation of their ethnic dignity. Petty, brought to life was absurd regulation aims to paralyze the will of the Ainu. Many young Ainu were removed from their traditional environment and directed by the Japanese for various activities, such as the Ainu of Hokkaido central districts were sent to work on marine fisheries Kunashir and Iturup (which at that time were also colonized by the Japanese), where they lived in an unnatural crowding, not being able to maintain a traditional way of life.

Ainu made a real genocide. All this has led to new armed appearances: Uprising on Kunashir in 1789. The course of events was as follows: Japanese industrialist Hidaayah trying to open the then independent Ainu Kunashir their factories, the leader of Kunashir — Tukinoe does not allow him to do so, captures all the goods brought by the Japanese, and the Japanese sent back to Matsumae, in response to the Japanese announce economic sanctions on Kunashir, and after 8 years of blockade Tukinoe allows Hidaayah open several factories on the island, the population immediately falls into bondage to the Japanese, after a while the Ainu led Tukinoe Ikitoi and raise a rebellion against the Japanese and quickly gain the upper hand, but a few Japanese saved, gets to the capital city and Matsumae Matsumae clan sends troops to quell the rebellion.

In 1807, a Russian expedition ITURUP moved. «The duty called us — wrote Captain Tails — free islanders [Ainu] from the tyranny of the Japanese.» The Japanese garrison on Iturup saw Russian ships fled inland. Ainu was declared «the expulsion of the Japanese as Etorofu belongs to Russia.»

In 1845, Japan unilaterally proclaimed sovereignty over all of Sakhalin and the Kuril Islands. This caused a negative reaction on the part of Nicholas I. However, beginning in 1853 the Crimean War forced the Russian Empire to meet Japan. 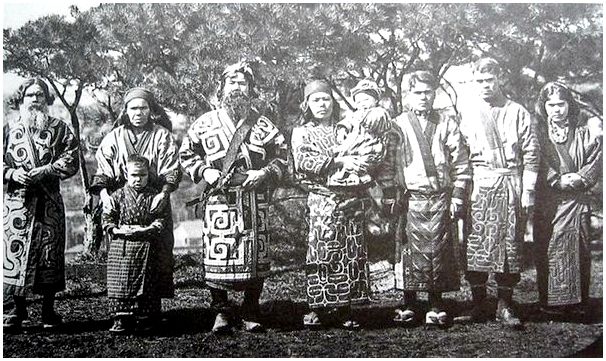 February 7, 1855 Japan and Russia signed the first Russian-Japanese treaty — Treaty of Shimoda on trade and borders. The document sets the boundaries between the islands of Iturup and Urup.

Kuril Ainu more gravitated to Russian than to the Japanese: many of them owned the Russian language and were Orthodox. The reason for this state of affairs was the fact that the Russian colonial order, despite the many abuses tribute collectors and armed conflict, provoked by the Cossacks, were much softer than the Japanese. The Ainu are not breaking out of its traditional environment, they are not forced to radically change the way of life, not relegated to the status of slaves. They lived in the same place where they lived before the arrival of Russian and engaged in the same occupations.

However severokurilskie Ainu did not dare to give up their home and go to the Russian. And then they suffered the most plight: the Japanese moved all Severokurilskih Ainu on the island of Shikotan taken from them all fishing gear and boats forbidden to go to sea without a permit, but instead the Ainu brought to the various activities for which received rice, vegetables, some fish and sake, which is not consistent with the traditional Ainu Severokurilskih diet that consisted of meat of marine animals and fish. In addition, the Kuril Ainu were on Shikotan in unnatural crowding, while the ethno-ecological characteristic feature of the Kuril Ainu were settling in small groups, with many of the island remained uninhabited and used all the Ainu as a hunting ground gently. It should also be borne in mind that on Shikotan were many Japanese.

Very many Ainu died in the first year. The destruction of the traditional way of the Kuril Ainu led to the fact that most residents of the reservation passed away. However, the terrible fate of the Kuril Ainu soon became known Japanese and foreign public. Booking eliminated. Surviving handful — no more than 20 people, the sick and impoverished — taken in Hokkaido. In the 70 years of data were available for 17 of Kuril Ainu, however, how many of them come with Shikotan — is unclear.

0
Like this post? Please share to your friends:
Related articles
Interesting 0
Society Former candidate for participation in the presidential election Sergey Ryzhov said that he
Interesting 0
Everything you need to know to start cranking out cash with your PC BY
Interesting 0
«… Air Force Commander Alexander Novikov reported that the two are ready to
Interesting 0
Above the summit crater of the volcano in Alaska Cleveland workers, local observatory
Interesting 0
December 1. Annual capacity is about 180,000 cubic meters of finished products used, including
Interesting 0
Disclose Truth TV introduced a new TV show with the participation of experts: Tarpeya
Categories
SQL - 49 | 0,262 сек. | 11.53 МБ