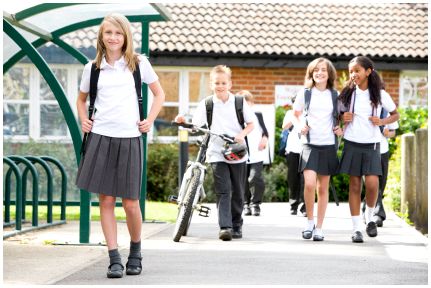 Since September of this year, the girls in a school in the UK will be strictly forbidden to attend classes in skirts and dresses. According to the school authorities, these items of women’s wardrobe lead to premature sexuality students’ appreciation of the opposite sex.

The decision was made the administration of the institution Moulton School and Science College in Northamptonshire, in which children learn at the age of 11 to 18 years. Until recently, the girls were allowed to wear skirts and dresses. However, as the guide explains, recently more and more parents allow their daughters to wear skirts and dresses, leaves open the knees, and this has a negative effect on the chastity of their classmates and promotes early sexualization.

Now, to avoid the appearance of the boys thought about sexuality classmates last forced to come to school only in black trousers. If any girl did violate the ban and will appear on the school doorstep depraved clothes that make her wear provided by the administration of a «change of pants» or sent back home.

0
Like this post? Please share to your friends:
Related articles
Interesting 0
Society Former candidate for participation in the presidential election Sergey Ryzhov said that he
Interesting 0
Everything you need to know to start cranking out cash with your PC BY
Interesting 0
«… Air Force Commander Alexander Novikov reported that the two are ready to
Interesting 0
Above the summit crater of the volcano in Alaska Cleveland workers, local observatory
Interesting 0
December 1. Annual capacity is about 180,000 cubic meters of finished products used, including
Interesting 0
Disclose Truth TV introduced a new TV show with the participation of experts: Tarpeya
Categories
SQL - 49 | 0,238 сек. | 11.41 МБ