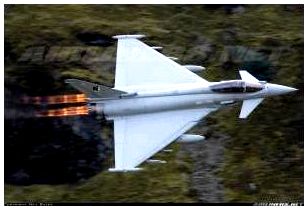 Eurofighter Typhoon — the twin-engine multi-role fighter 4th generation with a «duck» and a delta wing. Later versions of the current generation of fighter are 4 + or 4 +. Design and creation of Typhoon conducted by Eurofighter GmbH, which was created by a consortium Alenia Aeronautica, BAE Systems and EADSM in 1986. Development of promising aircraft began in 1979. 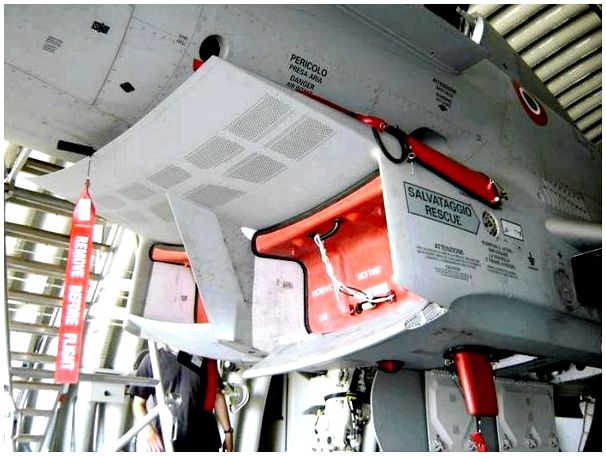 Typhoon — a unique combat aircraft produced in four variants: one variant for each country included in the consortium (Britain, Germany, Italy and Spain). At this time, all companies are building contractors units for each of the 620 aircraft.

Members of the consortium involved in the creation of subsequent parts multipurpose fighter:

EADS Deutschland — center section, the central part of the fuselage;

Design features EF2000 reflect zeal designers use the latest achievements in the field of electronics and aircraft. To provide the required level maneuvering characteristics, especially at huge angles of attack, fighter designed by scheme with low delta wing (sweep was 53 degrees), negative resistance supplies, two-piece flaps and slats, turning the front horizontal tail, vertical fin and rudder without stabilizer . This scheme has several advantages, the main one of which is to reduce drag at supersonic speeds.

The front edge of the front horizontal tail is made of radar absorbing material.

Although the category of new fighter aircraft made by technology «stealth» does not, in its design made several design-layout activities that were aimed at lowering the effective scattering surface. During the design put the puzzle reduce the effective surface scattering angles from the front irradiation radar systems four times the comparable value of the aircraft «Tornado».

Favorite The reflectivity possible design elements and plots fighter «Eurofighter» covered with radar absorbing materials, developed in the main concern EADS / DASA. Among them: the leading edge of the wing, the inner surfaces and leading edges vozduhopoglotiteley, rudder, and the adjacent surface and the similar. 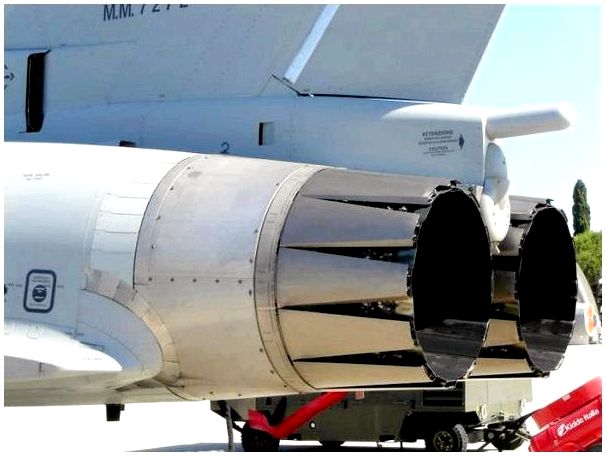 The design of the aircraft used different materials reinforced plastics make up 40 percent of the mass of the airframe, aluminum-lithium alloys (Al-Li 8090) — 20%, aluminum alloys — 18%, titanium alloys — 12% and fiberglass — 10%. Carbon composites on the surface for about 70 percent of the airframe, 12% — up fiberglass, 15% — metal, 3% — other construction materials. Contract foreseen that the empty weight of the aircraft must not exceed 9999 kg. In the long term may be the introduction of improved aluminum-lithium alloys. Estimated resource structure is 6 thousand hours

The fighter used odnokilevym plumage has a huge area to the rudder. Root part of the keel armed vozduhopoglotitelem exchanger cooling system.

Wing mechanization — section flaperon hangs elevons and also on each console section deflectable socks. Wing skin made of CFRP (deflected socks and containers at the wing tips are made of aluminum-lithium alloys).

Frontal area of ​​the horizontal stabilizer — 2.40 m2. It is produced in the main applied CFRP.

Tricycle landing gear strut has a unicycle. Top racks are cleaned in the direction of the fuselage, the front desk managed — forward. Pneumatics and chassis design is optimized for action even crudely repaired concreted runways, and landing without alignment. But in order to remove problems with heating drives the wheels during braking need saturated with bars, which was, according to the initial plans, the 500 meters, was increased to 700 meters. For emergency braking aircraft is equipped with a braking parachute.

The program development motor (EFA-Programm) was launched in 1983. For the base took RB 199 engine used on the multipurpose aircraft «Tornado». According to other sources, the engine was created on the basis of the experimental Rolls-Royce XG.40. his bench tests were conducted in 1988.

In 1986, a consortium was founded EurojetTurboGmbH to develop, design and manufacture the following engines EJ200. The founders of the consortium: Rolls-Royce (England), ITP (Spain), FiatAvio (Italy) and MTU AeroEngines (Germany). EurojetTurboGmbH located in the town of Hallbergmoos, near Munich, and related contracts with the agency NETMA (NATO), which in turn, is a partner of all these countries. 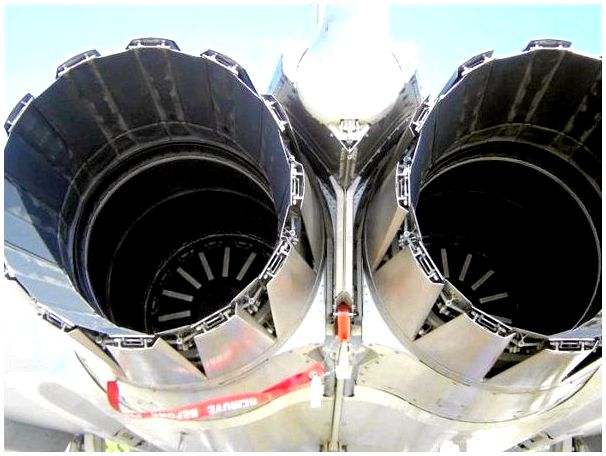 The fighter used unregulated ventral air intake with rectangular side edges and curved bottom edge, divided into two channels by a vertical partition (air supply to each turbofan) having a deflectable bottom and top panel motionless.

According to the intergovernmental agreement countries, Germany, England, Spain and Italy have pledged to participate in the joint development and manufacture of motor for a fighter «Eurofighter Typhoon». Modular engine. For removing it takes an average of 45 minutes.

Properties of the motor:

Fuel is located in the fuselage, wing and tail fin in self-sealing tanks. At the central and the outer pair underwing suspension nodes located outboard fuel tanks with a capacity of 1500 l and 1000 l, respectively. Also provided fighter flight refueling system. 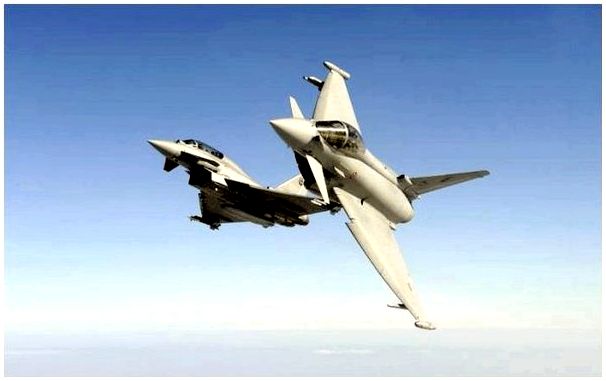 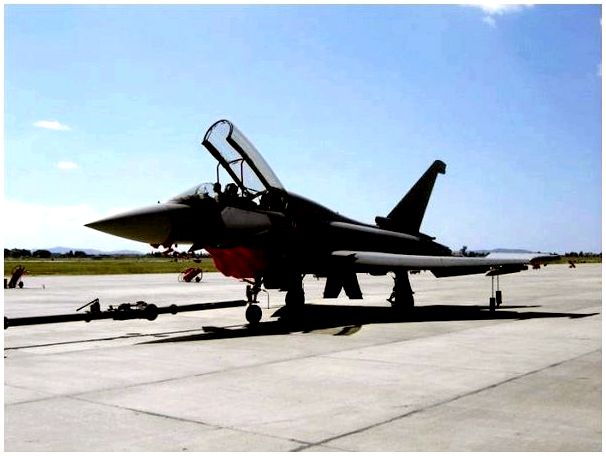 DASS defensive system is the most expensive part of electronic equipment for the Eurofighter. The system provides an estimate and synthesize data from radar and laser detectors radiation sensors and other relevant active switch (coupled to the wrong targets, jammers) and passive protection. Containers with equipment placed at the ends of the wings.

Do fighter «EF2000» no internal weapons bays. Instead they are the outer suspension components that contribute to the ESR characteristics but can extend the range of options and used weapons.

The fighter thirteen knots outer suspension. Typical armament — 4 medium-range guided missiles AIM-120 AMRAAM, «Skayflesh» (airplanes England) or «Asp» (in Italian airplanes) placed in the semi-flush position under the fuselage, and two short-range missiles ASRAAM or AIM-9 » Sidewinder «featured on last-wing sites. The total amount of missiles «air-air» up to 10 pieces, but take-off weight fighter even with such weapons should not exceed 18140 kg (40 thousand pounds). 3 nodes of the outer suspension may be located outboard fuel tanks. Plane resettled gun caliber of 27 mm Mauser. 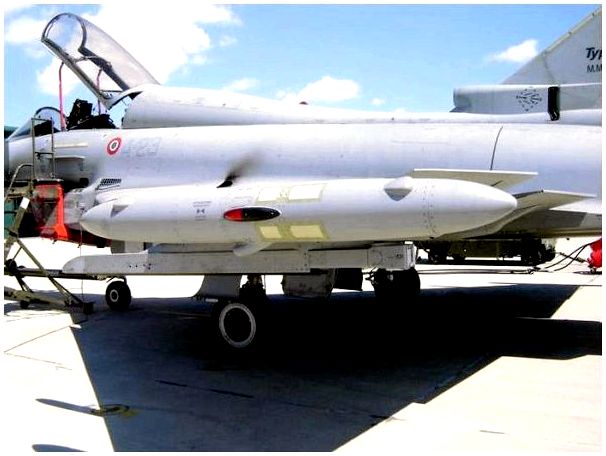 When the strike operations plane 7 hardpoints can be located up to 6,500 pounds of bombs, guided missiles and 6 «air-to-air.» Combat radius acts in the conduct of the struggle for an advantage in the air can be more than 1000 km, when the operation of the shock profile small-low altitude of 325 km, the profile of big-small-big — 1000 km. Plane with weapons «air-air» can patrol in the air for 3 hours and 15 minutes.

Designed for fighter polukonformnye mounted fuel tanks. Under one fuselage assembly suspension can be placed laser rangefinder-designator. On the wingtips are placed in containers and equipment REP blocks infrared traps.

Create fighters divided into three tranches — 148/236/236 One unit (total 620 aircraft) for 4 States Parties (England — 232, Germany — 180, Italy — 121, and Spain — 87). In the Air Force 4 States Parties planes «Tranche 1» began to arrive in the summer of 2003, in turn planes each tranche divided into lots and blocks, for example, the first tranche of the two-seaters for the Royal Air Force is divided into two batches of T1 and T1A. First aircraft arrived in 17 Squadron in 2003. There’s the first batch of aircraft are painstakingly researched and tested. In voennovozduschnye force first «typhoons» officially received July 1, 2005 Number of EF-2000 fighter aircraft delivered the first tranche in the current time is 148 pieces.

Consortium in 2002 signed the first export contract with the Government of Austria on 18 fighters modification «Tranche-2″ in the amount of 2.55 billion. dollars (1.95 billion. euros). But the Ministry of Defence and Austria «Eurofighter» in June 2007, have gained agreement on the reduction of the ordered aircraft to 15 and change edenits modification «Tranche-2″ on «Tranche-1.» Given a contract to supply Saudi Arabia 72 fighters, the program EF-2000 now includes the creation of 707 fighters for 6 customers.

Initially, the aircraft conform to the standard «F2 Tranche 1» («F2 model 1″), which meant only use planes in aerial combat against enemy aircraft. But in order to use the fighters in Afghanistan had to completely embody the possibility of liquidation of ground targets. «Typhoon» in July 2008, was declared a multi-purpose fighter, which is able to perfectly destroy both air and ground targets. The car has received abbreviation FGR4 (T3 — seater version of the aircraft). Complete modernization of all fighters «F2» to the level of «FGR4» planned to finish by the end of 2012

Currently signed a contract to build 40 fighters «Tranche 3.» Given fighters past models, the RAF would 107 cars «Eurofighter Typhoon» right up to 2030

Block 1 — Tranche 1, the original version of the fighters;

Block 5 — Tranche 1, multipurpose fighter version (there is a possibility of attacking ground targets);

Block 8 — Tranche 2, fighters with a new onboard computer;

Typhoon T1 — a training option to double the RAF;

Typhoon FGR4 — Multipurpose modification option Block 5 for the RAF. Modernization has been reduced to the installation of new systems mounted targeting systems, which were developed by the Israeli company Rafael and replenish ammunition controlled bombs weighing 450 kilograms (1,000 pounds). Bombs EnhancedPaveway II and Paveway II produces American company Raytheon. These bombs have a laser guidance system, but the system EnhancedPaveway II supplemented with GPS-guidance. Effectiveness of the «work» on the ground targets modernized «Typhoon» checked during the past in Nevada joint British-American exercise Green Flag.

Radius acts in the mode of attack aircraft — 600 km;

0
Like this post? Please share to your friends:
Related articles
Interesting 0
Society Former candidate for participation in the presidential election Sergey Ryzhov said that he
Interesting 0
Everything you need to know to start cranking out cash with your PC BY
Interesting 0
«… Air Force Commander Alexander Novikov reported that the two are ready to
Interesting 0
Above the summit crater of the volcano in Alaska Cleveland workers, local observatory
Interesting 0
December 1. Annual capacity is about 180,000 cubic meters of finished products used, including
Interesting 0
Disclose Truth TV introduced a new TV show with the participation of experts: Tarpeya
Categories
SQL - 47 | 0,562 сек. | 10.89 МБ